Accessibility links
NPR Review: 'Delayed Rays Of A Star,' By Amanda Lee Koe Amanda Lee Koe's new novel was inspired by a famous photograph — Anna May Wong, Marlene Dietrich and the notorious actress and director Leni Riefenstahl, posing together at a Berlin party in 1928. 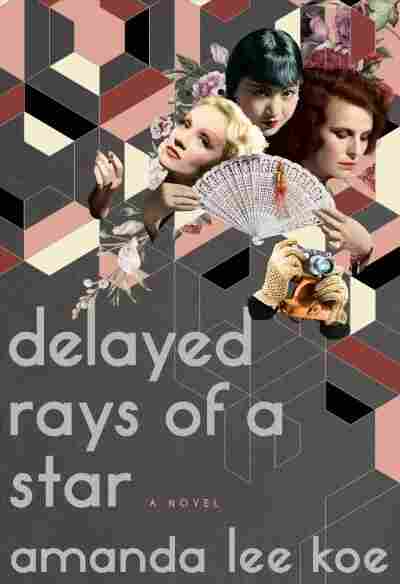 Delayed Rays of a Star

Audacity in the face of great odds is a mesmerizing thing to watch. It is the kind of performance that ambitious women have always had to put on in their quest to achieve their dreams — just think of superstars like Janelle Monáe, Beyoncé, Lady Gaga and others, all of whom project a confidence and strength onstage and in their work to such an extent that it's easy to forget that they are human beings with complex inner lives, insecurities, moments of weakness or doubt or shame. Fame discourages us from looking at icons as people, as if doing so will make them lose their power. Amanda Lee Koe's debut novel, Delayed Rays of a Star, proves that it is just the opposite, that it is their humanity, their internal struggles, that makes their outsized performances all the richer.

Delayed Rays of a Star starts with a chance meeting in 1928 between Anna May Wong, Marlene Dietrich, and Leni Riefenstahl. The three enter a Berlin party as virtual strangers and emerge forever linked by the lens of photographer Alfred Eisenstaedt. In the photo that opens the novel, the three actors stand close together and smile for the camera, arms around each other, ignorant of the diverging futures that will mercilessly take hold of them, make them, ruin them, and preserve them in the public memory in wildly different ways.

For those who don't know these film icons, Anna May Wong was the first Chinese American actress to achieve international acclaim, Marlene Dietrich was a bisexual and gender-bending German actress who was one of the highest-paid Hollywood stars in her day, and Leni Riefenstahl was an actress and director of, among others, the infamous Nazi propaganda film Triumph of the Will. All three women were pioneering in their work, and each, in her own way, was also harmed by the times and systems she lived within. It is the moral tightropes each woman walks, and the razor thin edge between fulfilling one's ambition and selling one's soul, that is at the core of the novel.

Wong, a born-and-bred Californian, was forced to play exoticizing roles in which she was sometimes Chinese, and sometimes playing some other "other," like an indigenous Alaskan or a Mongol slave. In a stirring scene in the novel, Wong is harangued by a film critic in China — a country whose press was harsh towards her from the start — during her sole press tour there. Wong tells him that to be "a nonwhite actress in Hollywood is to be a puppet playing by the rules that are opposite your own beliefs." But he doesn't back down: "You have found success in Hollywood not just for your talent, but your willingness to exploit Western fancy. Can't you smell your own hypocrisy?" Koe, however, allows Wong to be more than an outsider in both Hollywood and "homeland," instead pulling forth her deep, yearning love of the craft of acting and the disappointments she suffered as time and again she wasn't allowed to play the lead.

Dietrich, who died alone in the apartment in France where she shut herself in during the last decade or so of her life, retains her performative streak to the very end in Koe's rendering. To a maid who makes a face when cleaning the fancy casserole dish and pitcher the aging star uses for bedpans, Dietrich says, in her trademark provocative way, "Everyone should be glad I can still pee."

It is hard to summarize a sprawling and ambitious novel like this, so I won't — but it is expertly woven, its characters alive and full-bodied.

Riefenstahl, who received financial support and artistic flattery from the Nazi Party and Hitler himself but, after the fall of the Nazi regime, claimed no knowledge of the Holocaust, remains to this day an endlessly controversial figure. Koe doesn't paint her as ignorant so much as willfully unknowing, but she is the only one of the three who gets an entire section in her own voice, providing a fictional late-in-life interview in which she is transparently dismissive of the charges of racism against her ("Black skin is more beautiful than white skin," she says in classic fetishism), but also dispenses nuggets of painful truth about being an artist and a woman: "I have never been a Nazi," she tells the interviewer, "I was just an artist working in a certain place at a certain time. I am the scapegoat because it is easier to take your rage out on a woman, instead of the system." Whether or not the first part of this is true, we cannot know — but that last sentence reeks of the ways in which women are still easily villainized for situations they did not create or even contribute to.

Beyond the inner lives of these three women, Koe's novel delves into those who hovered around them, creating a broad tapestry encompassing the 1920s to 2003 and characters as far removed as a sex-trafficked Chinese woman in Paris and a gay German film crew best boy who is mourning the lover he watched die in battle. It is hard to summarize a sprawling and ambitious novel like this, so I won't — but it is expertly woven, its characters alive and full-bodied. Blending questions about pop culture, war, and art, Delayed Rays of a Star is that rare book that is neither high- nor low-brow, refusing such facile dichotomies and playing, instead, in the messiness of the grey areas.