Accessibility links
KFC Obliterated By Explosion In North Carolina After a blast rocked the chicken restaurant in Eden, N.C., smoke and flames erupted from the ruined building and debris and sparks fell from the sky. The moment was captured on surveillance footage.

Police say nobody was injured when a KFC restaurant in Eden, N.C., was destroyed in an overnight explosion. Deputy Chief Clint Simpson/AP hide caption 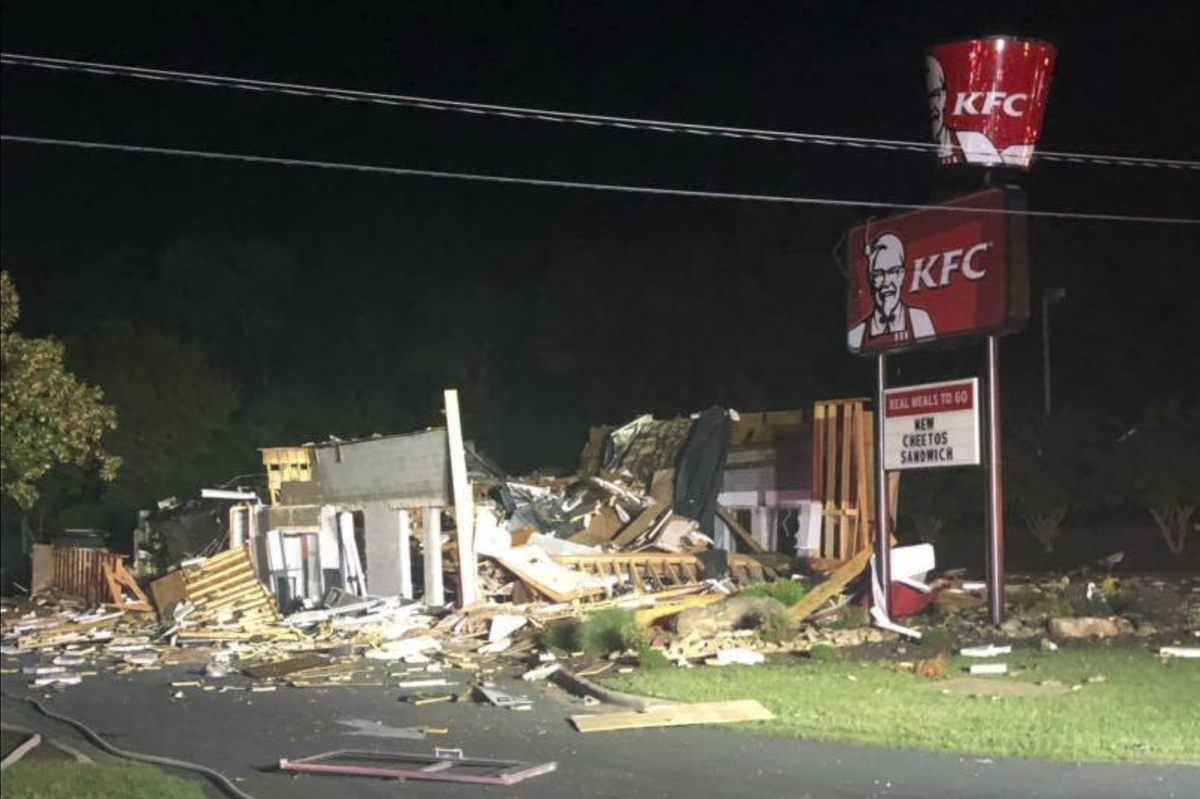 Police say nobody was injured when a KFC restaurant in Eden, N.C., was destroyed in an overnight explosion.

About two hours after a Kentucky Fried Chicken restaurant closed for business on Wednesday night, a massive blast reduced it to rubble within seconds.

The explosion in the small town of Eden, N.C., which happened Thursday just after 12:30 a.m., was captured in dramatic surveillance footage from a neighboring pharmacy.

It shows a quiet building under street lights, when suddenly the frame fills with white from the blast. Smoke and flames erupt from the demolished building, and debris and sparks fall from the sky.

"We do have some surrounding buildings that sustained damage from the blast," he said. A pizza restaurant from across the street had its windows knocked out.

The restaurant's sign, however, survived the explosion. The smiling face of Colonel Sanders stands unscathed next to the ruined restaurant. A sign advertises "New Cheetos Sandwich."

Simpson says the timing of the blast, late at night when there were few people around, was incredibly lucky. "A couple hours before, you would have had employees and probably patrons in the restaurant," he said. Authorities have said they think the KFC closed between 10:15 p.m. and 10:30 p.m.

"It's really close to a major roadway," he adds. "They were fortunate; the density of the traffic was almost zero passing by that restaurant when it occurred." Simpson says the road in front of the KFC was riddled with broken glass and bits of wood.

He said that the police are not aware of any previous reports of gas issues at this restaurant.

A KFC employee told the News & Record that he smelled natural gas while working a shift before the explosion. Christian Jarrett said he had a headache and told the newspaper that he thought his supervisor attempted to turn off the restaurant's gas supply.

He happened to drive by the restaurant about an hour and a half after it closed, and found it destroyed.

"Knowing that I could have been in there just terrifies me," Jarrett told the News & Record.

The Eden Police Department says it is receiving assistance from local, state and federal agencies in its investigation.