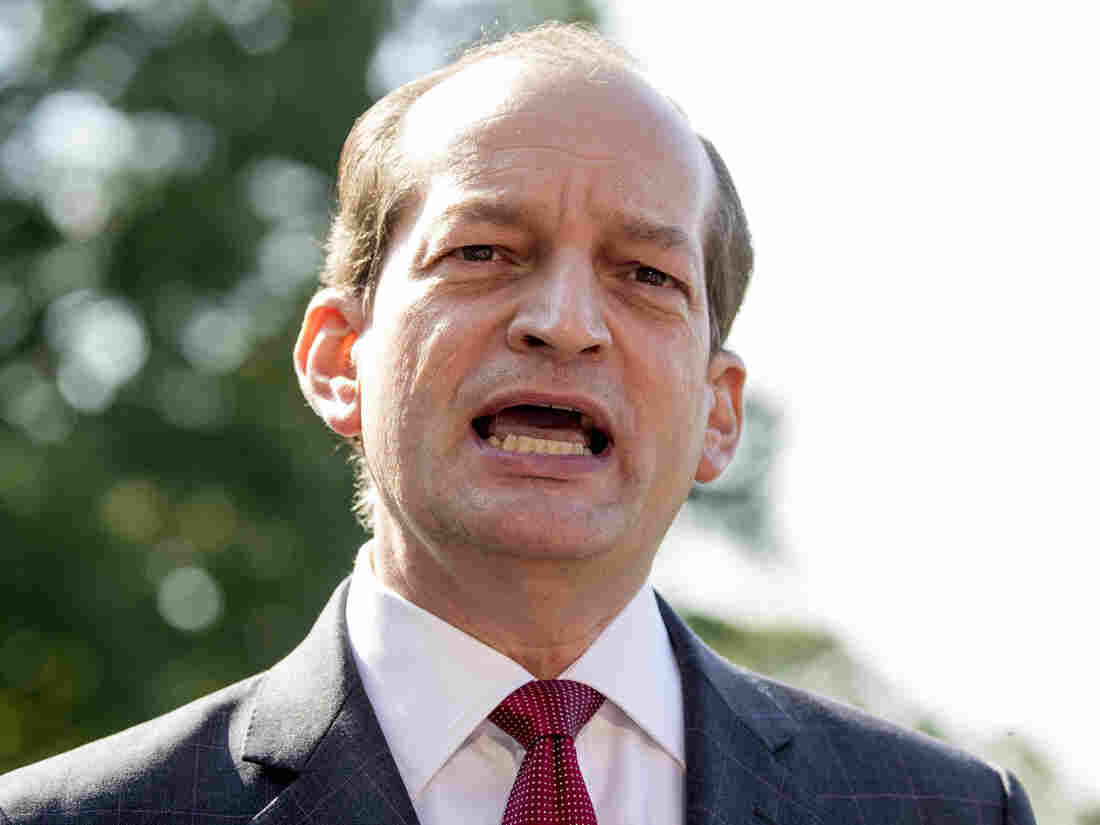 Alex Acosta said Friday he is stepping down as labor secretary so his handling of a 2008 prosecution of Jeffrey Epstein won't distract from the U.S. economy's "amazing" performance. Andrew Harnik/AP hide caption 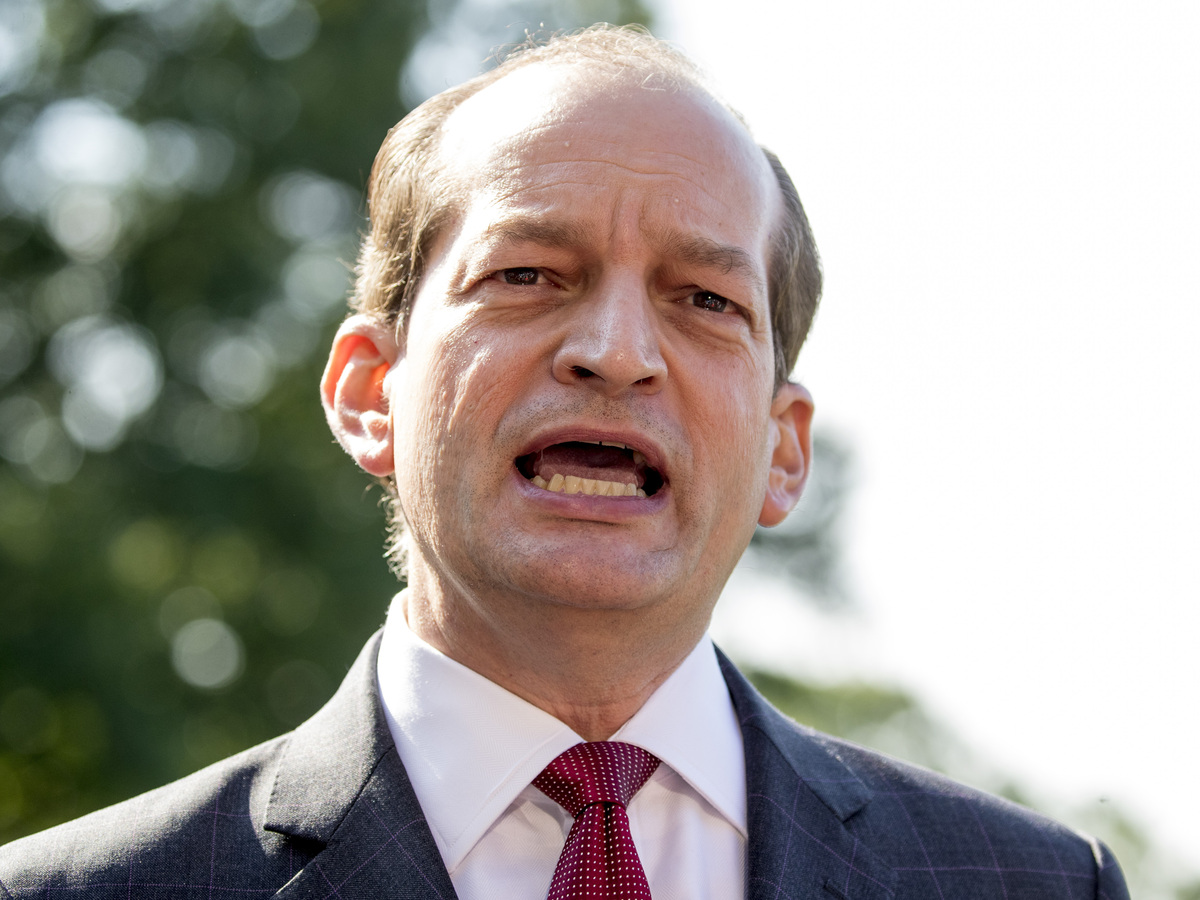 Alex Acosta said Friday he is stepping down as labor secretary so his handling of a 2008 prosecution of Jeffrey Epstein won't distract from the U.S. economy's "amazing" performance.

Residents of South Florida expressed relief that President Trump's Labor Secretary Alex Acosta is resigning his post. The Friday announcement was seen as "a victory" by those still angered by Acosta's handling of a 2008 sex crimes case involving wealthy financier Jeffrey Epstein.

Acosta is a former federal prosecutor in South Florida. This week he had been under renewed and intense scrutiny stemming from the deal under which Epstein pleaded guilty to lesser sex crimes and served 13 months in county jail, with work release during the day.

As Acosta announced his resignation, federal prosecutors in Manhattan alleged in court filings that Epstein had attempted to buy influence over people who were set to testify against him. He is accused of wiring $350,000 last year to two associates.

Federal authorities are seeking to block Epstein's release as he awaits trial stemming from charges brought against him earlier this week. Epstein is due back in court Monday for a bail hearing.

He is accused of sexually abusing underage girls, some as young as 14.

Florida State Sen. Lauren Book, a Democrat, said in a statement that Acosta's resignation was "a victory for crime victims everywhere."

She added, "Acosta aided and abetted criminal sex predator Jeffrey Epstein — and was rewarded with one of the top positions within the United States government ... until the truth caught up with him."

"This is a step towards justice for the survivors of Jeffrey Epstein's abuse," tweeted Rep. Debbie Wasserman-Schultz, D-Fla.

Acosta's time as labor secretary was ticking down after federal prosecutors in New York brought the new charges against Epstein on Monday.

The indictment alleges Epstein "enticed and recruited" underage girls to his properties in Manhattan and in Palm Beach, Fla. He allegedly not only sexually abused the minors but also constructed an elaborate scheme of paying victims to lure other underage girls to be abused.

Acosta spent roughly an hour in Washington on Wednesday defending his handling of the Epstein case he oversaw in Florida more than a decade ago. Under the deal Acosta brokered, Epstein pleaded guilty to a pair of counts of solicitation, one of the cases involving a minor.

The plea also stipulated that Epstein register as a sex offender.

Epstein was allowed to leave his cell for up to 12 hours a day to work at his office. He also had a personal driver take him from the jail to the office and back.

In a statement Friday, Jack Scarola, an attorney in Palm Beach who represents some of Epstein's accusers, called Acosta's decision to leave his post in President Trump's Cabinet "very good news."

"Mr. Acosta will now have plenty of time and no distractions that prevent him from fully accounting for the sweetheart treatment Epstein received," he said. "We look forward to this occurring in a forum where there is no opportunity to get away with untruths, half-truths, evasion, and diversion."

Isidro "Sid" Garcia, another Palm Beach lawyer who is also representing an Epstein accuser, told NPR it wasn't a bad idea for Acosta to go.

"I thought the plea deal that was made was very questionable. I wasn't sure at the time who dropped the ball or failed to do what they had to do," Garcia said.

He thinks Epstein's connections to powerful people allowed him to secure such an extraordinary deal on Acosta's watch.

"[It's] not entirely shocking that he got the deal that he did," Garcia said.

"I feel power and influence obviously influenced the scales of justice," said Kirk Blouin, town manager of Palm Beach, Fla., who prior to his post served 29 years in the Palm Beach police department.

Blouin says he did not work directly on the investigation of Epstein but was in the department and worked with officials who did. He said the Epstein case stood out.

"I was involved in thousands of cases, and not all of them turn out the way you think they should, but in that case it was very bizarre."

Speaking before reporters at the White House Friday, Acosta said it would be "selfish" for him to remain in the administration at this time.

"I called the president this [Friday] morning. I told him I thought the right thing was to step aside. It would be selfish for me to stay in this position and continue talking about a case that is 12 years old rather than the amazing economy we have right now."