Accessibility links
How NASA Chose The Camera That Went To The Moon Astronaut Walter Schirra's decision to bring a Swedish-made Hasselblad on his Mercury spaceflight set the course for NASA's choice of the camera for the Apollo lunar program. 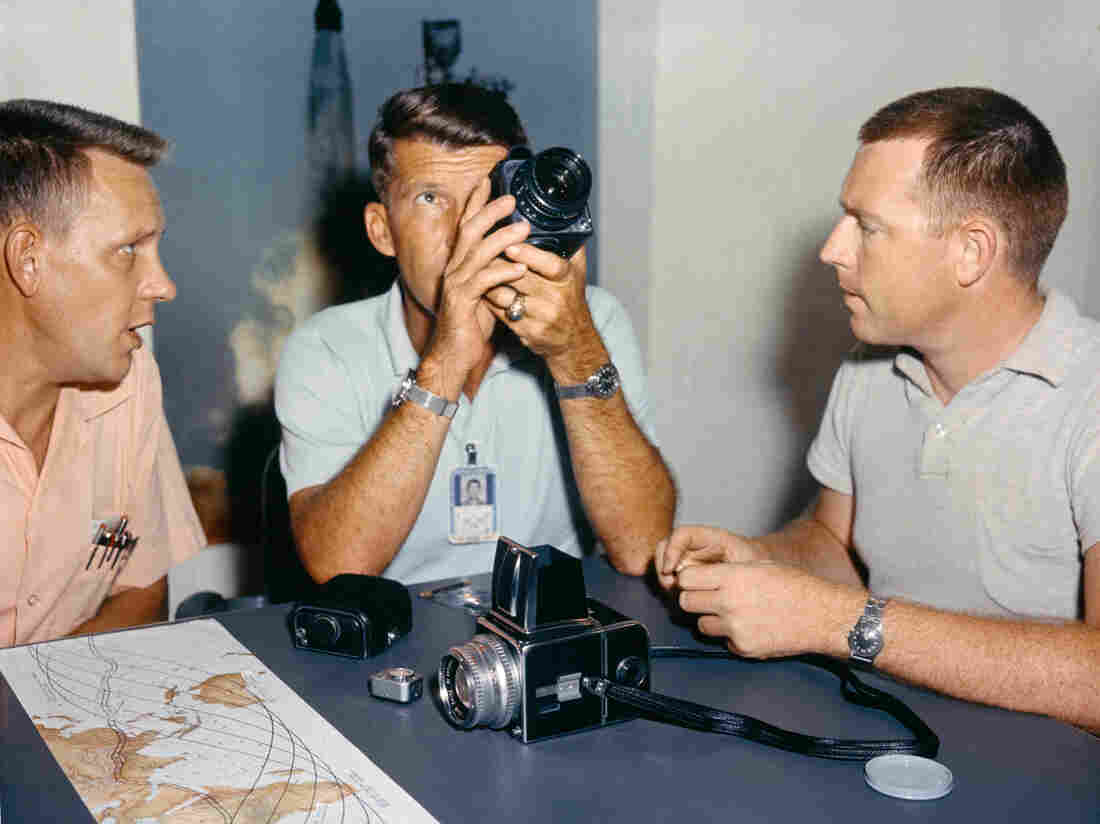 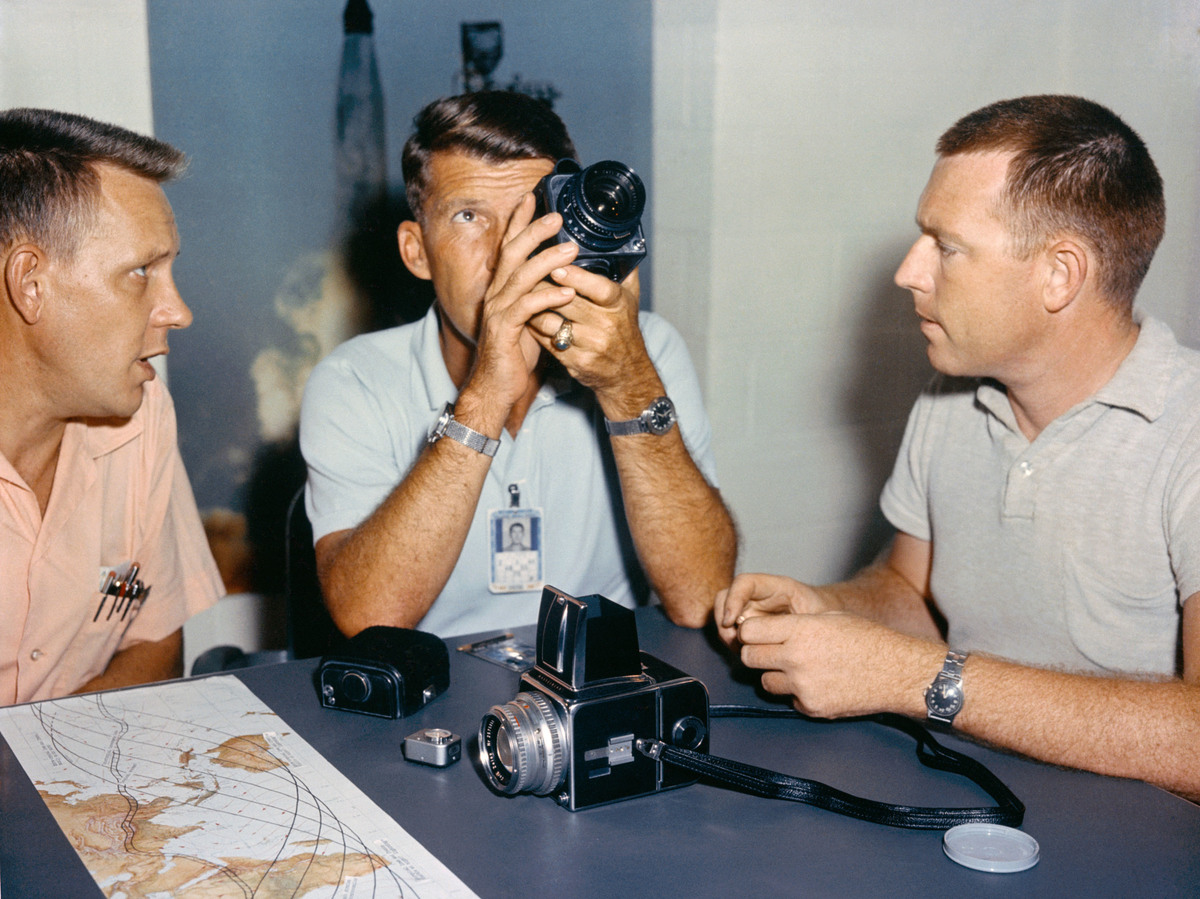 In the summer of 1962, Walter Schirra — who would soon become America's third man to orbit the Earth — walked into a Houston photo supply shop looking for a camera he could take into space.

He came out with a Hasselblad 500C, a high-end Swedish import that had been recommended to him by photographers from Life and National Geographic.

"He was sort of an amateur photographer," Jennifer Levasseur, a curator in charge of the Smithsonian National Air & Space Museum's astronaut cameras, says of Schirra. "Somewhere along the line, the decision was made that he could select what camera was flown on his flight."

Schirra's was a much more sophisticated — and pricey — choice than the simple Ansco Autoset that John Glenn bought for $40 at a Cocoa Beach, Florida, drug store. Glenn used it to take pictures from orbit on Friendship 7 in February 1962. The Hasselblad retailed for about $500 and used a much larger negative than Glenn's 35 mm camera. It also sported interchangeable, Carl Zeiss lenses and removable film magazines. 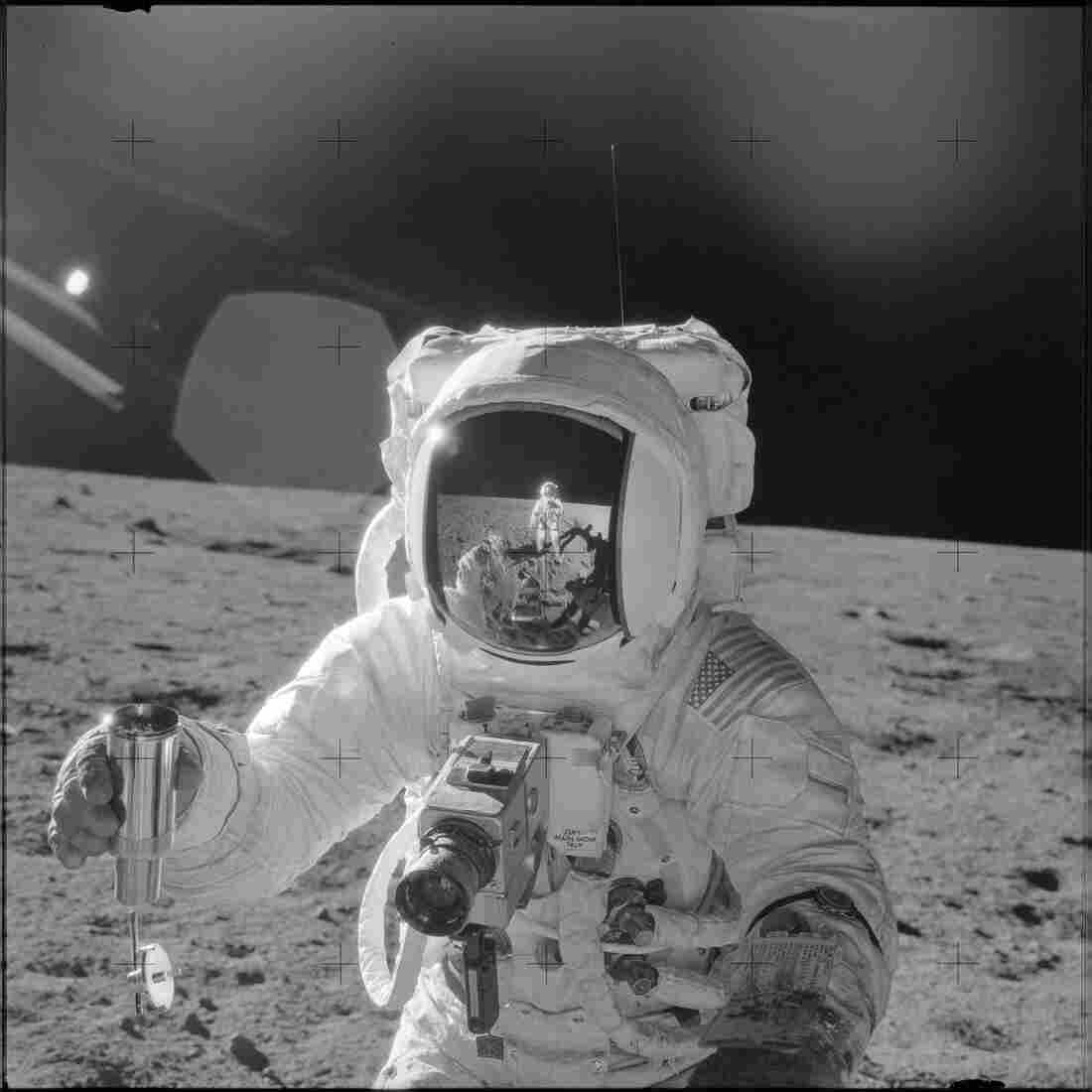 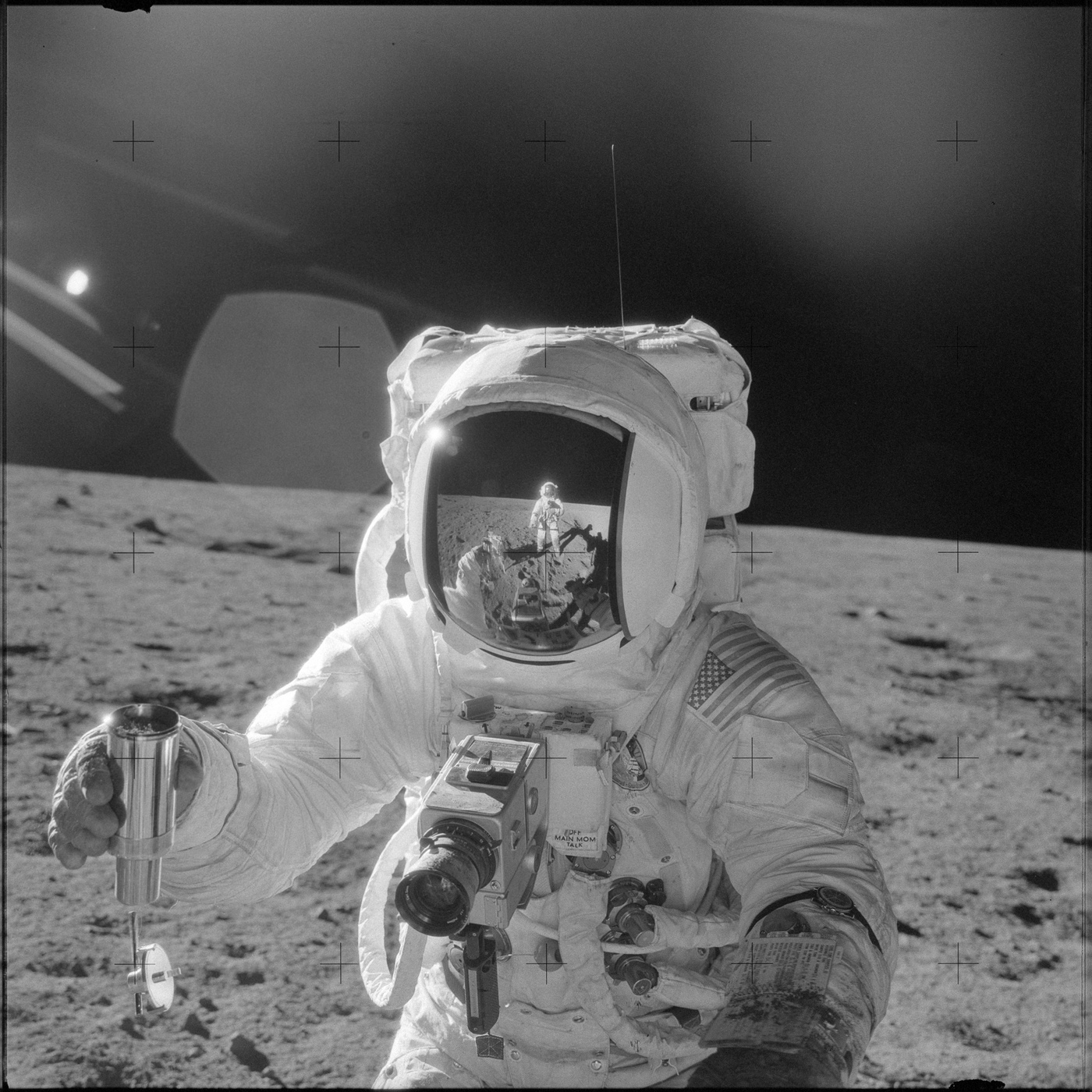 When NASA got a look at Schirra's Hasselblad, they liked what they saw. The space agency purchased at least one more. Engineers tore into the off-the-shelf consumer model to make it space-worthy. They stripped it down to save weight and painted it dull black to reduce reflections. They also had to "astronaut-proof it," says Cole Rise, a photographer and filmmaker who builds custom reproductions of the Hasselblad space cameras.

For example, Rise says, a release for the film magazine was removed to prevent it being accidentally bumped in flight. It was made so only a ground-based engineer with a wrench could free it. A waist-level viewfinder was ditched in favor of a simple, custom side-finder that could be aimed while wearing a helmet and visor, he says.

"Imagine trying to fit inside an industrial washing machine and taking a photo through the window upside down," explains Rise. "It's hard to look through the viewfinder when you're in such a tight space."

In a 1998 NASA interview, Schirra acknowledged that his six orbits in October 1962 didn't leave much time for photography, but that on the next flight the following spring, with 22 orbits, astronaut Gordon Cooper "got some absolutely gorgeous pictures," said Schirra.

Hasselblad's Chris Cooze says until then, the space agency was so focused on the technical side of spaceflight that photography was something of an afterthought.

He says it was in 1965, when NASA released stunning photos of Ed White's spacewalk on Gemini 4, that Hasselblad "put two and two together" and realized the pictures were taken with one of their cameras.

"Then they got in touch with NASA to see if there was anything that we could cooperate on," Cooze says.

It was a relationship that would result in one of the singularly iconic photos of the 20th century — "Earthrise" taken by astronaut Bill Anders from the command module of Apollo 8 on Christmas Eve, 1968 — and ultimately put a dozen Hasselblads on the moon's surface. 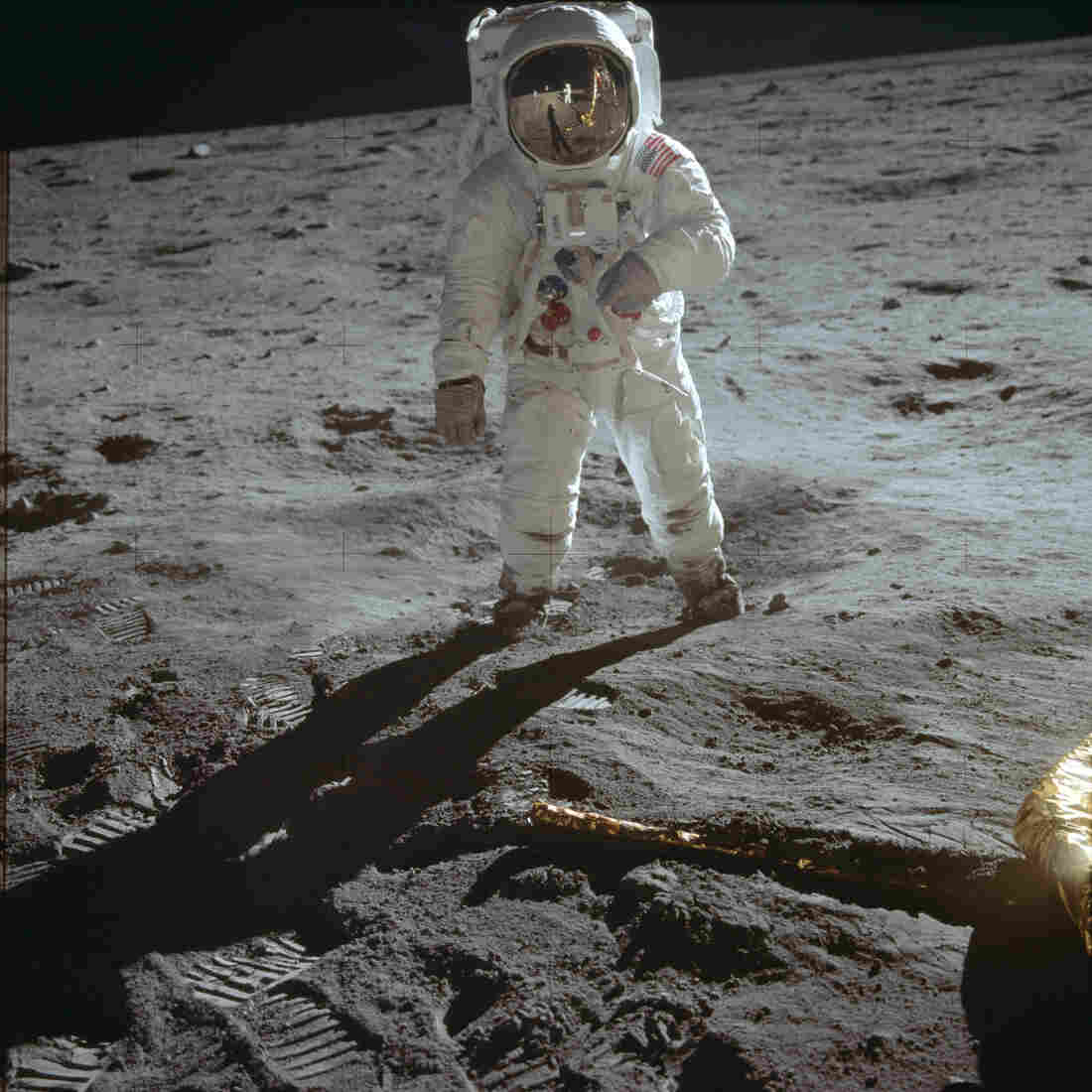 Astronaut Buzz Aldrin, lunar module pilot, walks on the surface of the moon during the Apollo 11 extravehicular activity. Neil A. Armstrong/NASA hide caption 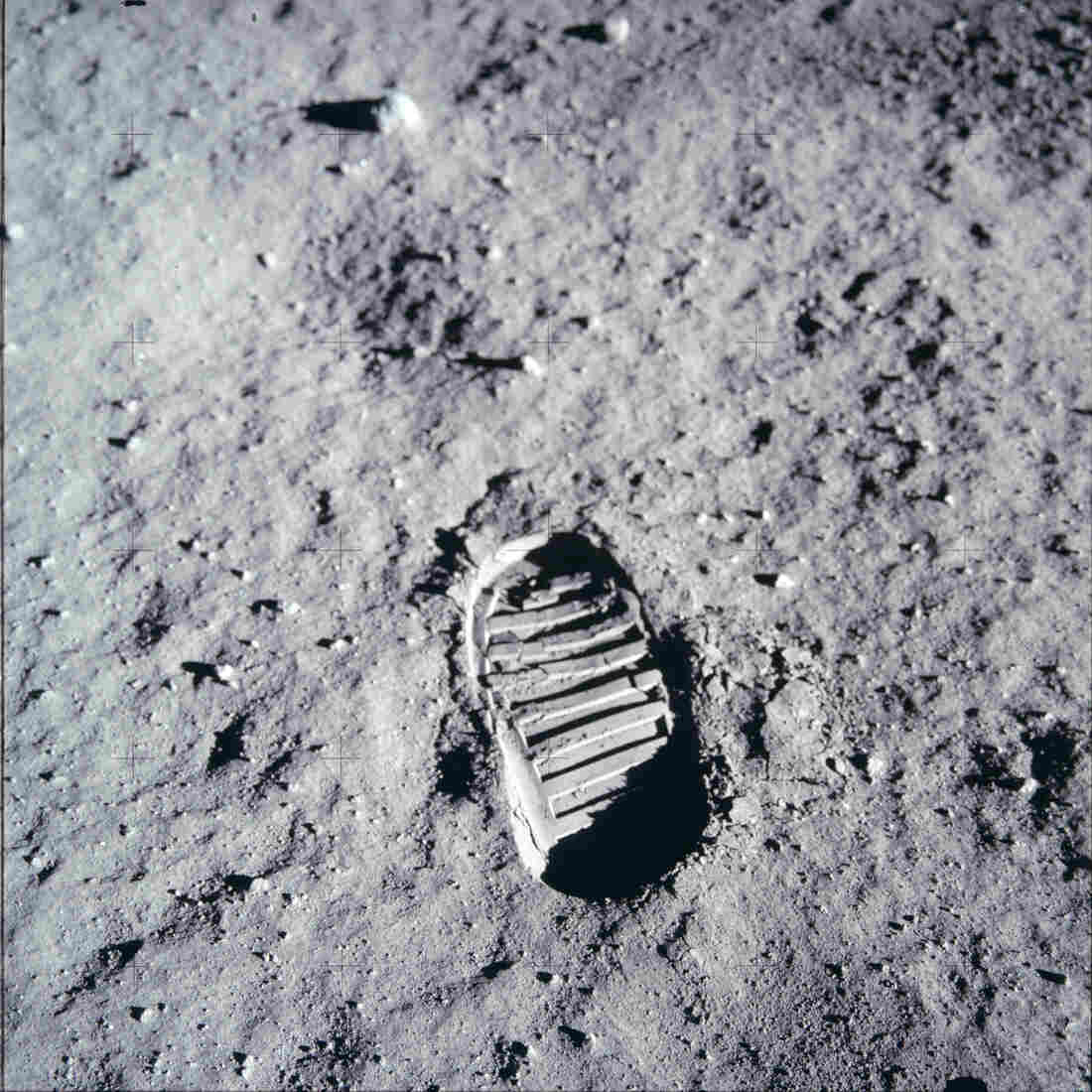 A close-up view of an astronaut's bootprint in the lunar soil, photographed with a 70 mm lunar surface camera during the Apollo 11 mission on the moon. Neil A. Armstrong/NASA hide caption 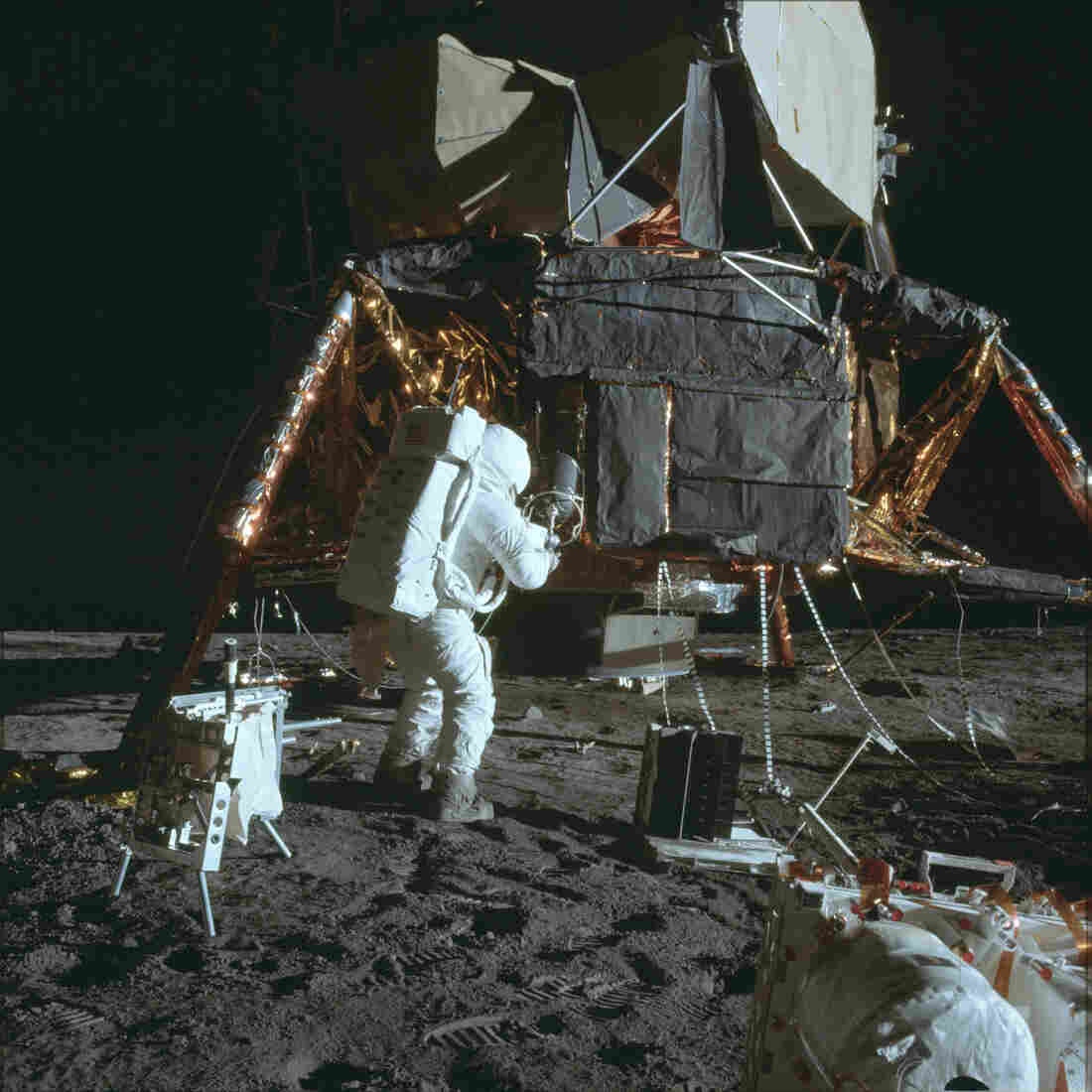 By the time of Apollo, Hasselblad and NASA were working hand-in-hand to produce the 500EL, suited for long-duration flight and the vagaries of the lunar environment. The manufacturer built a high-capacity film holder, while Eastman Kodak invented a thinner film emulsion — a combination that resulted in getting hundreds of shots out of a single magazine.

For the 500EL "Lunar Surface Data Camera," a motorized film advance was added, as was something called a Réseau plate — a piece of glass placed near the film plane that imprinted cross marks on the negatives. The crosses can be seen on many of the moon photos. They allowed for correcting film distortion and helped in judging sizes and distances of objects, "because on the moon, there's no recognizable landmarks — there's no telephone poles or houses in the distance," says Rise. 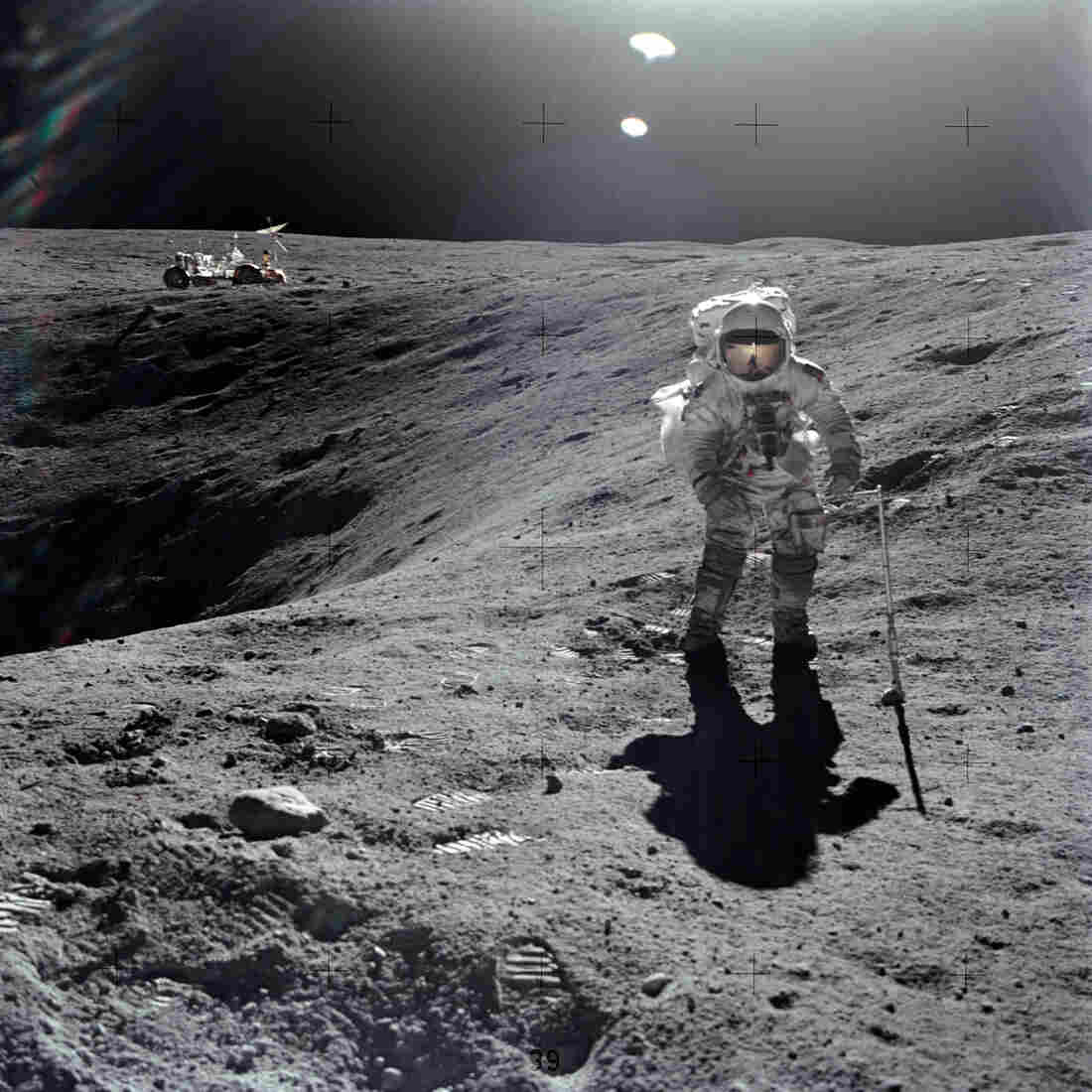 Astronaut Charles M. Duke Jr. is photographed collecting lunar samples at Station No. 1 during the first Apollo 16 mission. Duke is standing at the rim of Plum crater. The parked lunar roving vehicle can be seen in the left background. John W. Young/NASA hide caption 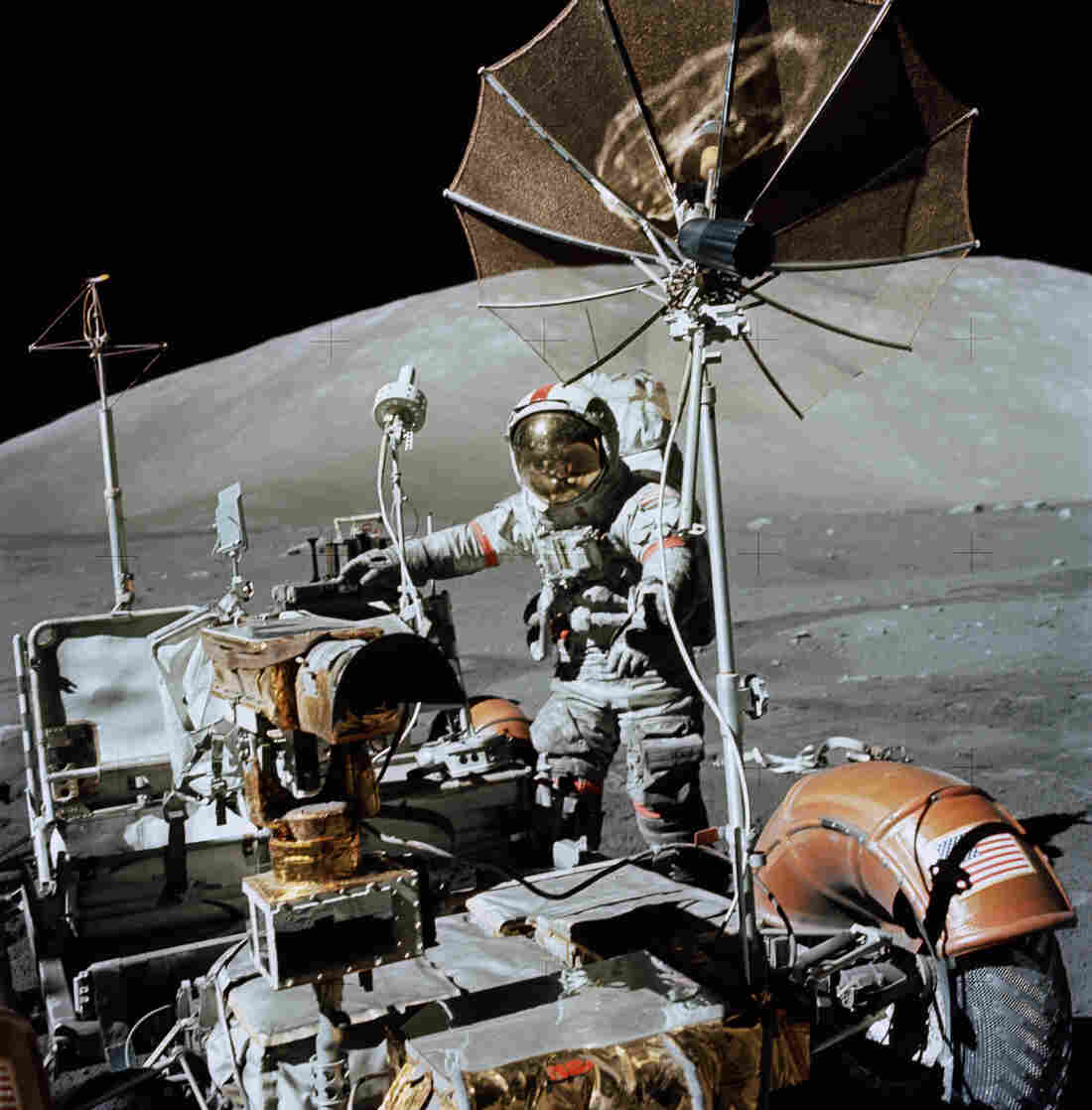 The shutter button and other controls were made larger for ease of operation wearing the thick protective gloves of the moon suit, and astronauts were given suggested exposure settings for a variety of scenarios. Among other modifications, a special lubricant was produced that could withstand the huge temperature swings of the lunar surface.

Like the earliest Hasselblad carried on the final Mercury flights, the Data Camera lacked a conventional viewfinder. Instead, astronauts went through training on Earth to learn how to aim the camera by feel from chest-level, where it was attached to the spacesuit.

"They needed to know that the position of the camera ... along their body was going to produce a certain kind of image," Levasseur says.

While the landings produced some stunning images, it's not surprising that without a viewfinder, some of them were poorly framed, she says. "There are about 18,000 or so images taken during the Apollo program and there are plenty that aren't any good." 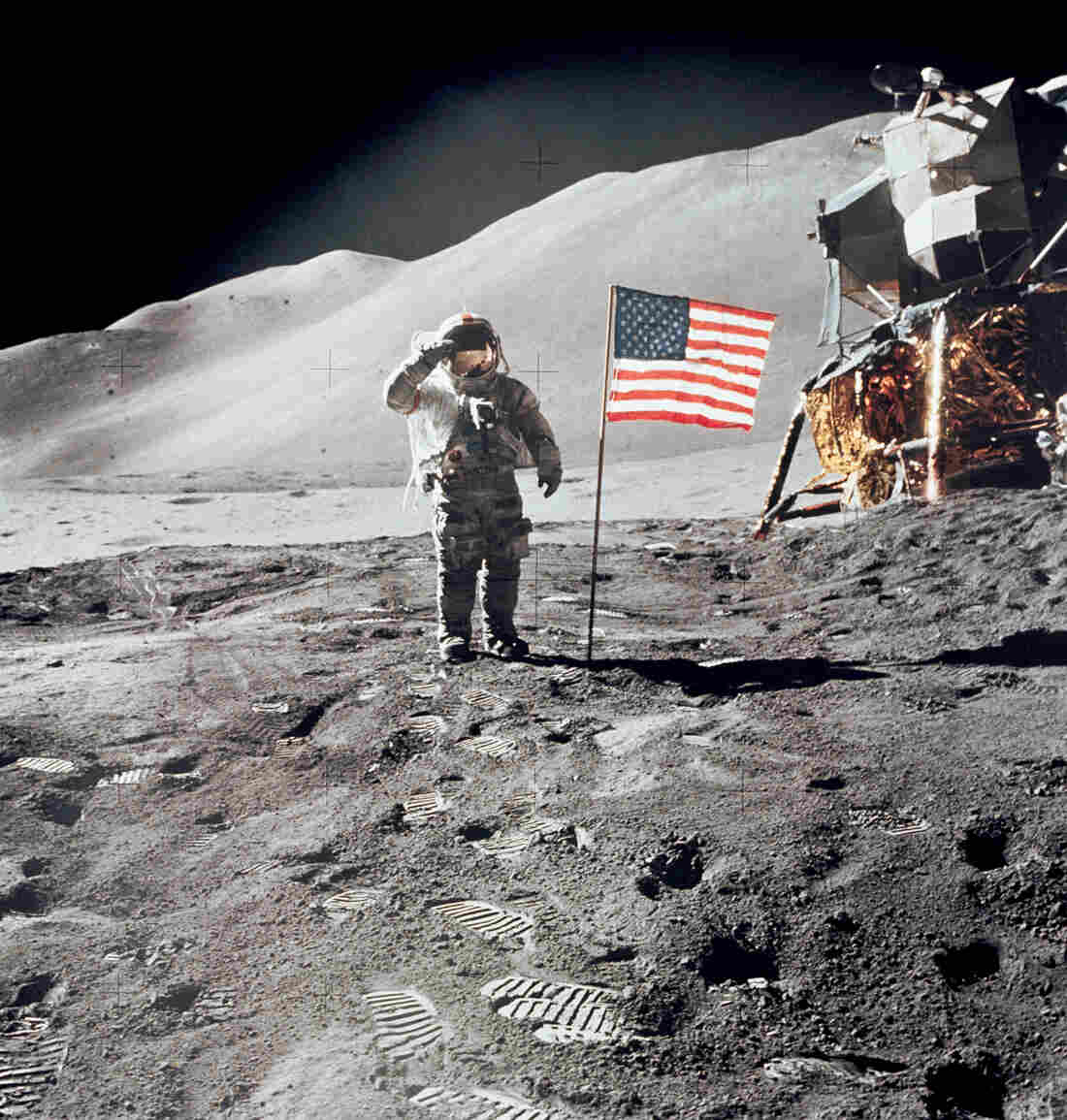 Looking for "any shot" of Armstrong

On July 20, 1969, the Apollo 11 Lunar Module landed with two cameras, but only one went outside — carried by Neil Armstrong. That explains why nearly every photograph of an astronaut on the surface during that first landing is of Armstrong crewmate Edwin "Buzz" Aldrin. Armstrong had the only camera for nearly the entire two-and-a-half hours the two walked around the Sea of Tranquility.

An official NASA document describes how the space agency's public affairs department, scrambling to satisfy the world's media for photographs of the historic moonwalk, suddenly discovered an embarrassing oversight.

Aldrin, who was busy setting up lunar experiments, did briefly take over the camera and remarkably, snapped only a single photo of Armstrong. The camera "just wasn't part of what his job was at the time," Levasseur says. 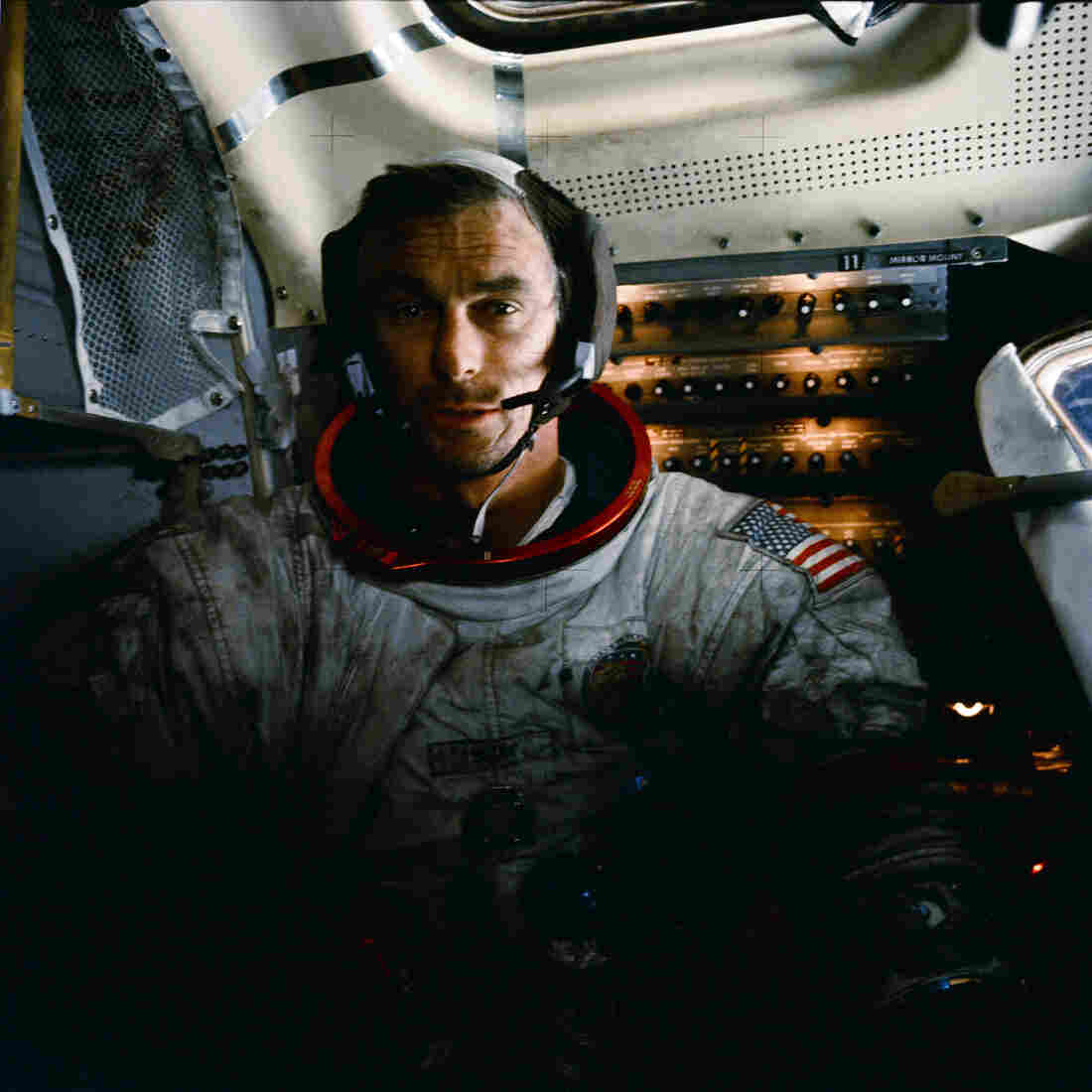 Cernan is photographed inside the lunar module on the lunar surface. Note lunar dust on his suit. Harrison H. Schmitt/NASA hide caption

"There were no directions to take photographs of each other, which I always find really interesting," she says. "You're going to travel all the way to the moon and nobody ever thought, 'Gee, we should take pictures of people.' "

On later missions that involved longer romps on the surface, there was more time for photography, and each astronauts carried his own camera. Even so, NASA had such difficulty telling one identically suited astronaut from another that a red stripe was added to the commander's suit at the arms, legs and helmet to help distinguish the pair. 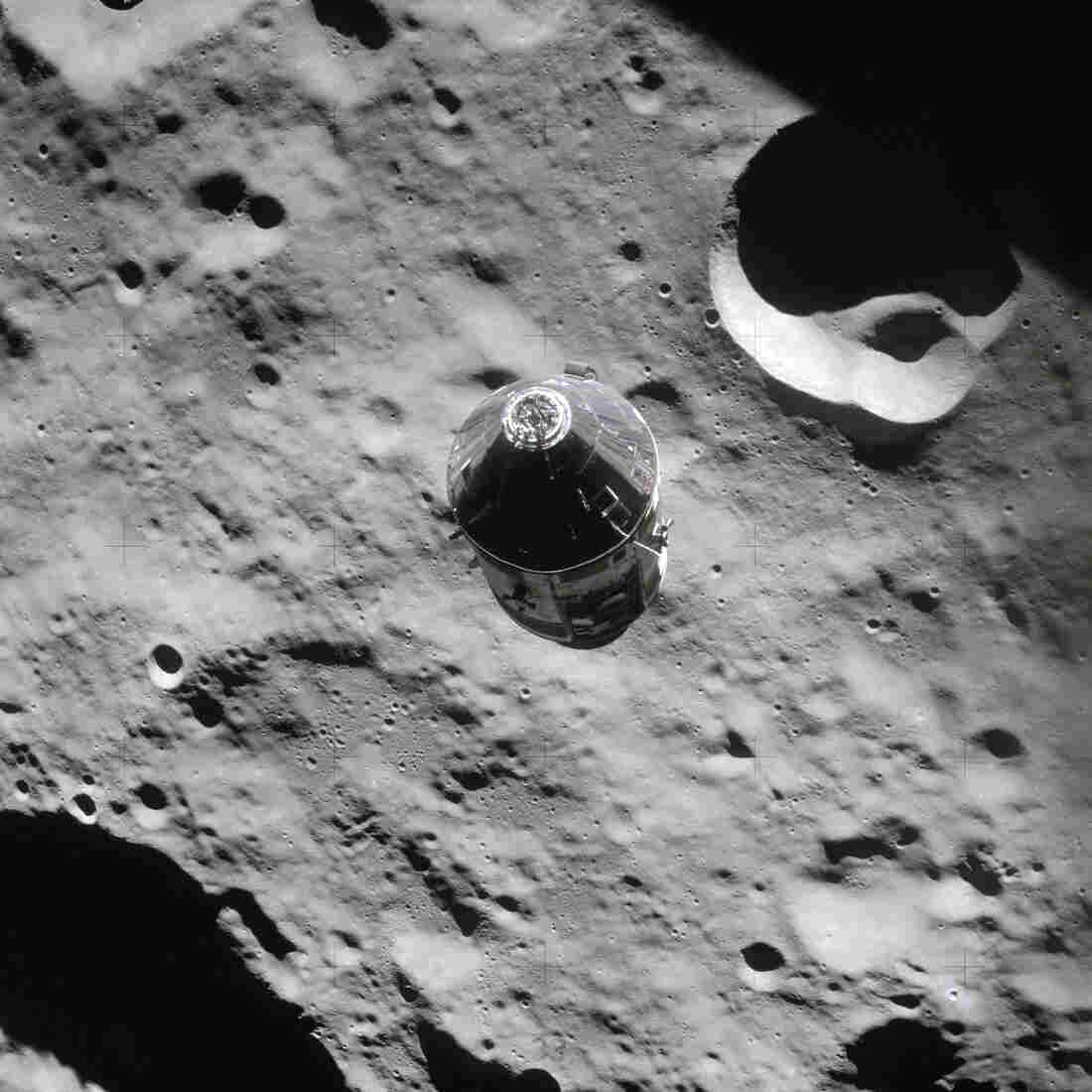 In total, thousands of pictures came back from the surface in six missions — most taken by the Hasselblads, but some with other specialized cameras.

A few of the cameras themselves also returned, Levasseur says, but NASA was nervous about having enough fuel to get off the moon and back to the orbiting command module.

As a result, they imposed strict weight-limits on what the astronauts could take home. Moon rocks, it turns out, are more valuable than cameras. So, the astronauts were instructed to pack the exposed film but leave behind the Hasselblads.

And, that's where they remain today, untouched, at the six Apollo landing sites. 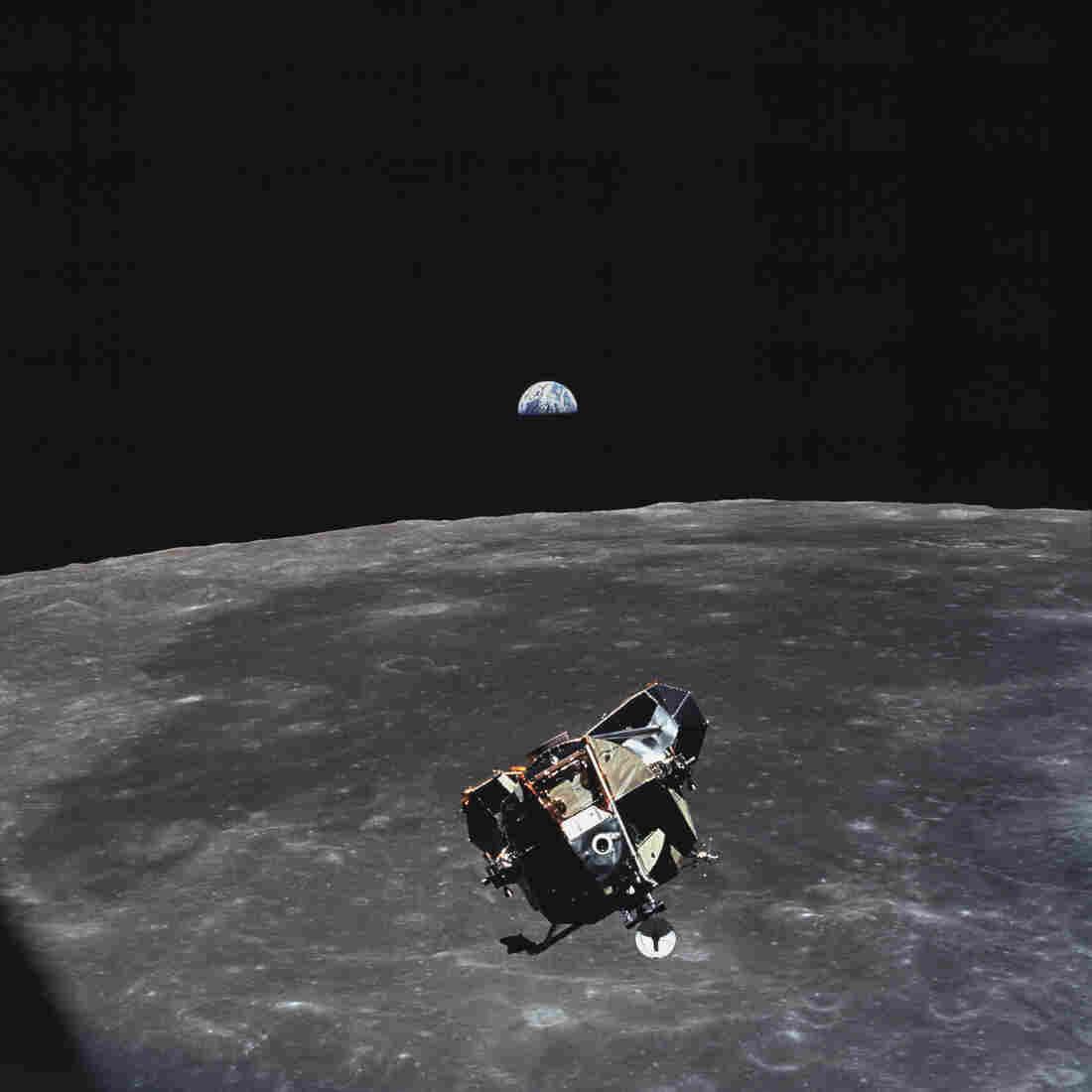 The Apollo 11 ascent stage, with astronauts Armstrong and Aldrin aboard, is photographed in lunar orbit. The lunar module was making its docking approach. The large, dark-colored area in the background is Smyth's Sea; Earth rises above the lunar horizon. Michael Collins/NASA hide caption