Albert Almora Jr. of the Chicago Cubs is comforted by Jason Heyward after a young child was injured by a foul ball off Almora's bat. The accident happened on May 29 in the fourth inning of a game against the Houston Astros at Minute Maid Park in Houston. Bob Levey/Getty Images hide caption 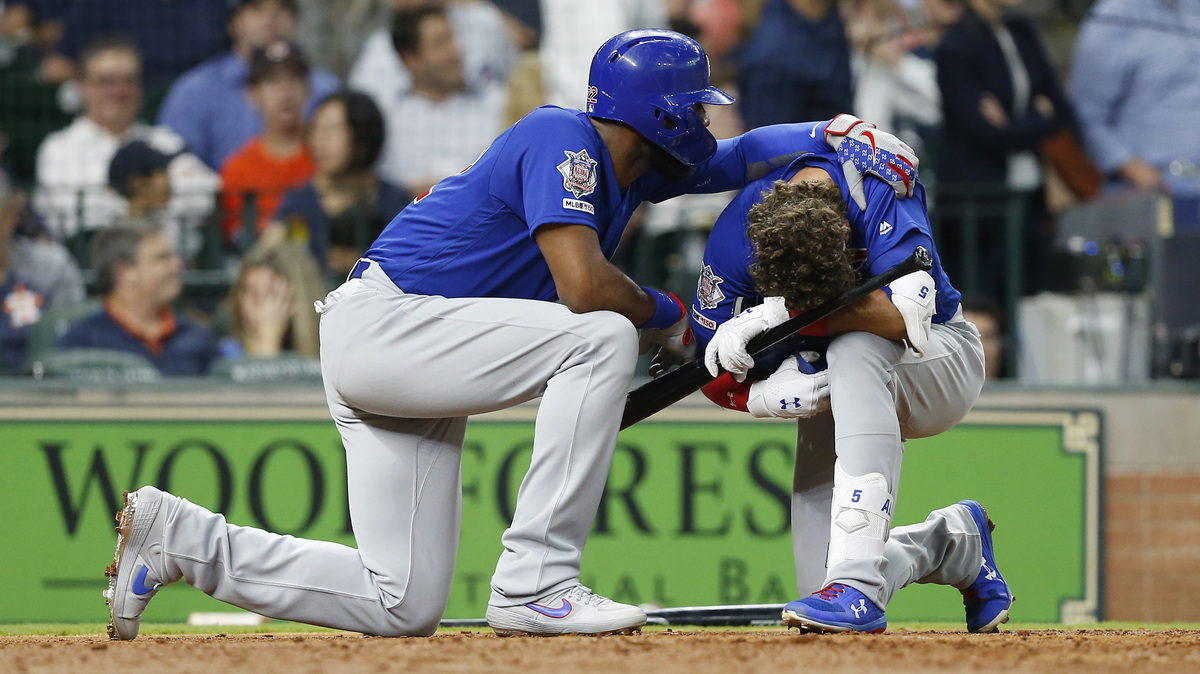 Albert Almora Jr. of the Chicago Cubs is comforted by Jason Heyward after a young child was injured by a foul ball off Almora's bat. The accident happened on May 29 in the fourth inning of a game against the Houston Astros at Minute Maid Park in Houston.

Chicago Cubs center fielder Albert Almora Jr. dropped to one knee during the fourth inning last May, hands over his face in horror. He had just watched a foul ball fly off his bat and strike a 2-year-old girl in the head, fracturing her skull.

The incident, every baseball hitter's nightmare, was not a one-off. Last month, a fan was hit during a Chicago White Sox game and another during a Los Angeles Dodgers game.

Last year, a 79-year-old woman died from a foul ball that flew over the netting behind home plate at Dodger Stadium.

This season has seen a number of foul ball injuries, reigniting a debate about whether to extend protective netting at baseball stadiums.

"It's so sad," Bryant said to an ESPN reporter after the May 29 game at Minute Maid Park. "I don't know what we can do. Let's just put fences up around the whole field. ... I think any safety measure we can take to make sure fans are safe, we should do it."

Bryant isn't the only one taking up the call. Other players and fans have pushed for more safety, especially after the foul ball death in 2018, the MLB's first in nearly 50 years.

While foul balls aren't new, conditions at games have changed. Players are more powerful, the seats have gotten closer and fans can be more distracted.

John Eric Goff, a physics professor at the University of Lynchburg, studies the science of sports. He thinks the current netting is insufficient.

"It takes one second for the ball to travel 130 feet," Goff said, "and that's just past the netting in a lot of major league baseball parks."

Dina Simpson recalls the night she was injured at a Lake County Captains minor league game in Ohio, sitting just beyond the stadium's protective netting with her kids and husband.

"I, too, thought, 'Oh, if a ball comes my way, I'm just going to catch it or duck,' " Simpson said, "but in that moment of chaos your brain's not even processing what's happening before that ball has come at you."

Her husband yelled for her to duck, but she couldn't react in time. She says she can no longer see out of her right eye and hasn't gone to a game since.

She hoped to get help from the team but says that never happened.

The Lake County Captains general manager, Neil Stein, told NPR he couldn't talk about the incident. But in an interview with a local television station, he spoke about league disclaimers for both major and minor league parks.

"We have stickers on the back of our seats about fan safety, about paying attention at all times, we have it on our ticket-back language," said Stein, speaking with Cleveland Fox 8.

He is referring to liability protection under the "Baseball Rule," a tort law ruling nearly as old as the major leagues itself. The rule makes it difficult for injured parties to sue over their injuries.

Teams have disclaimers posted throughout their stadiums and, as Stein described, printed on the backs of ticket stubs.

Child Struck By Foul Ball At Cubs-Astros Game; Player Breaks Down In Tears

From Fastballs To Greaseballs, A History Of Baseball In 10 Pitches

From Fastballs To Greaseballs, A History Of Baseball In 10 Pitches

Still, as more people are injured, players and fans continue to push for better safety. In 2018, all 30 MLB teams extended their netting around home plate. The Major League Baseball Players Association has twice called for netting from foul pole to foul pole, modeled after Japanese baseball stadiums.

But there's been resistance, including the argument that netting would obstruct the view of high-priced seats. MLB Commissioner Rob Manfred has also said that while fan safety is important, it would be difficult to adopt uniform standards.

"We've made tremendous strides in the last four years in terms of the amount of netting in ballparks," Manfred said Monday during an interview with ESPN's Mike Golic. "The way we've achieved that is we have worked with the clubs individually, recognizing that each ballpark is different in terms of the way it's laid out, in terms of the infrastructure that's in place and we have constantly encouraged them to make improvements."

So far, the only team to undertake the pole-to-pole safety precaution is the White Sox. The Dodgers, Washington Nationals, Texas Rangers and Pittsburgh Pirates all plan to extend their stadium netting this season.

Manfred said he expects more discussions about netting extensions at all parks to happen in the off-season.