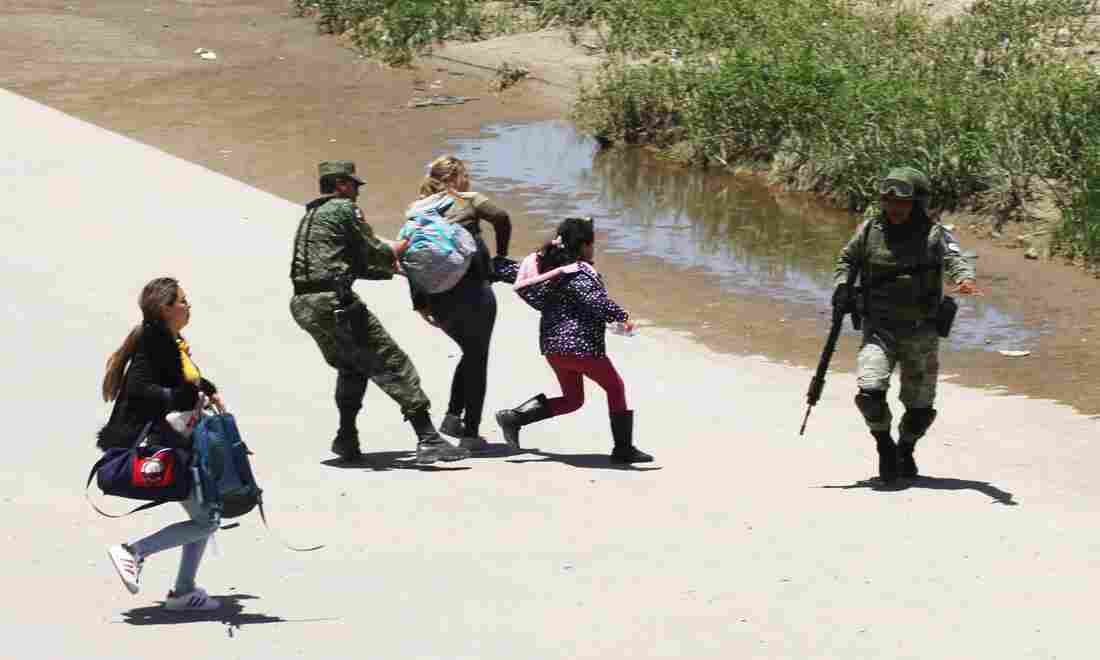 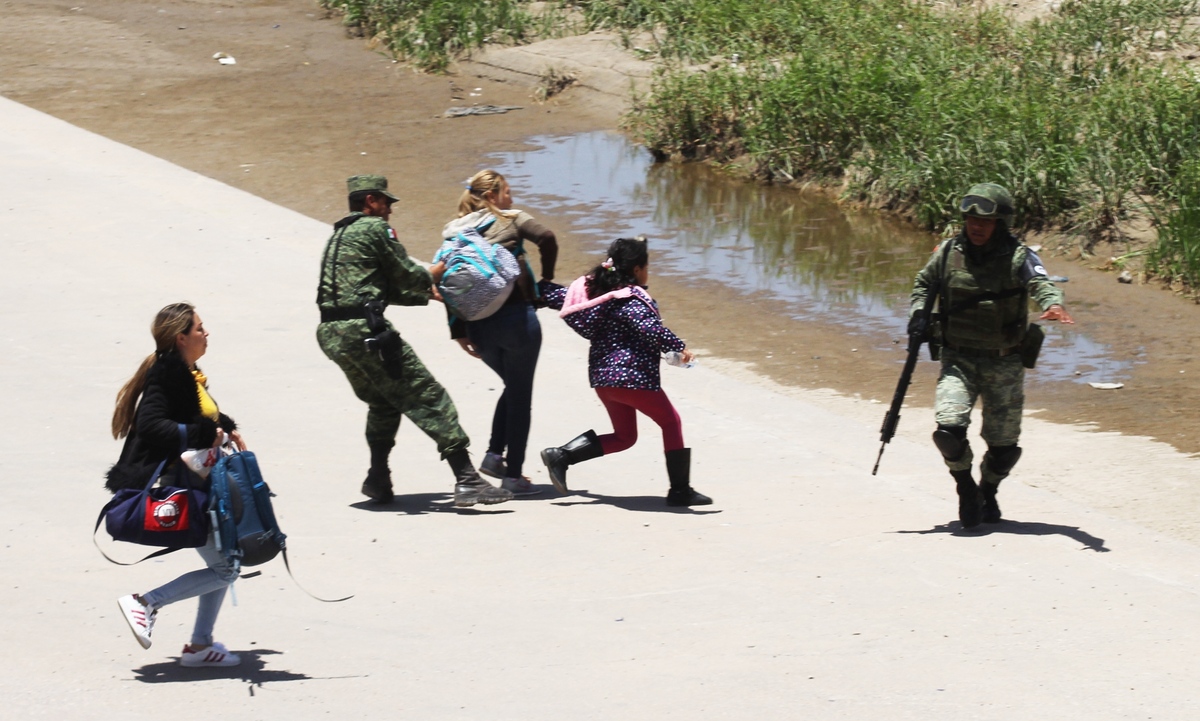 Under pressure from President Trump's tariffs threat, Mexico reached a deal with the United States on June 7 to step up immigration enforcement and to take in more migrants waiting for their U.S. asylum hearings.

The agreement reads: "Given the dramatic increase in migrants moving from Central America through Mexico to the United States, both countries recognize the vital importance of rapidly resolving the humanitarian emergency and security situation. The Governments of the United States and Mexico will work together to immediately implement a durable solution."

The deal came at a critical time: Families continue to flee Central America by the thousands for a better life in the north. Getting Mexico to take strong action was President Trump's latest move to reverse this trend.

Here is a look at how it's going.

What is Mexico doing to ramp up immigration enforcement?

The Mexican government's main promise was to deploy its National Guard, even if it had not officially been created yet. NPR has seen many members of the new force still wearing army or marine uniforms but with National Guard armbands. About 6,500 guard members are deployed near Mexico's southern border with Guatemala and another 15,000 are patrolling the northern part of Mexico, on its side of the U.S. border, according to Mexican officials. The National Guard is working, often alongside immigration enforcement agents, to prevent migrants from entering Mexico from Guatemala in the south, and to stop them from leaving to the U.S. in the north. 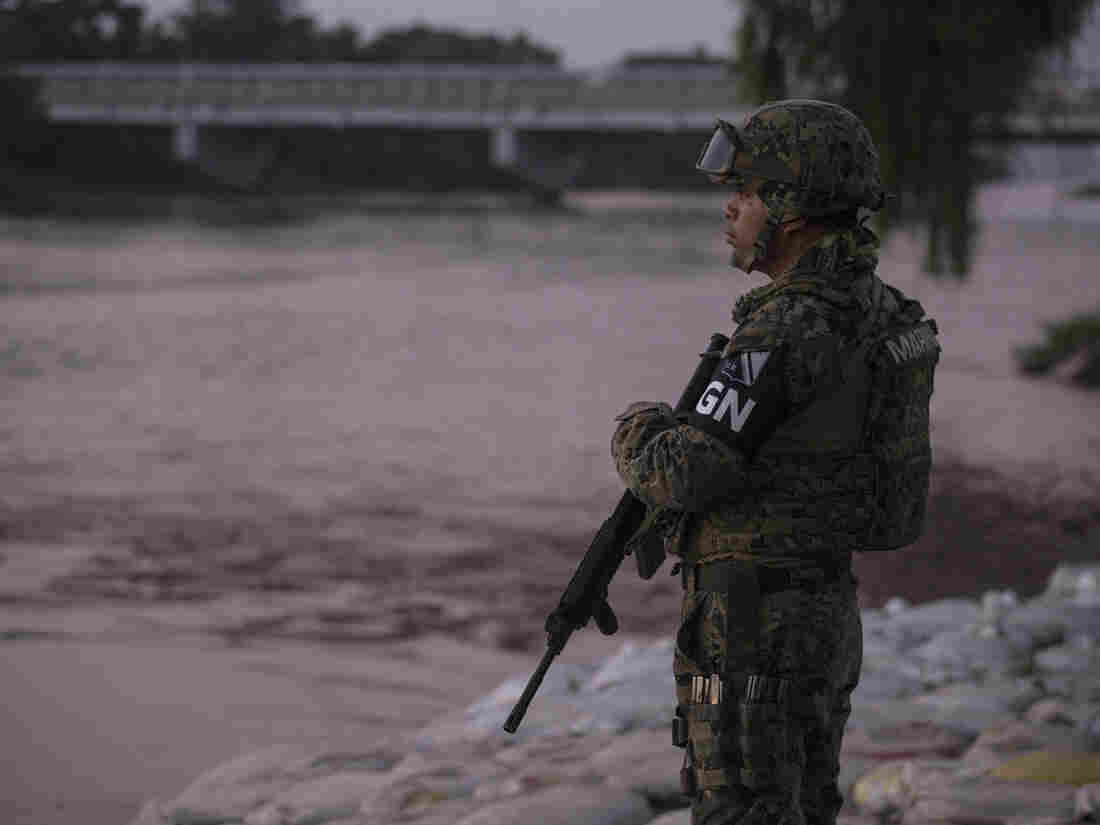 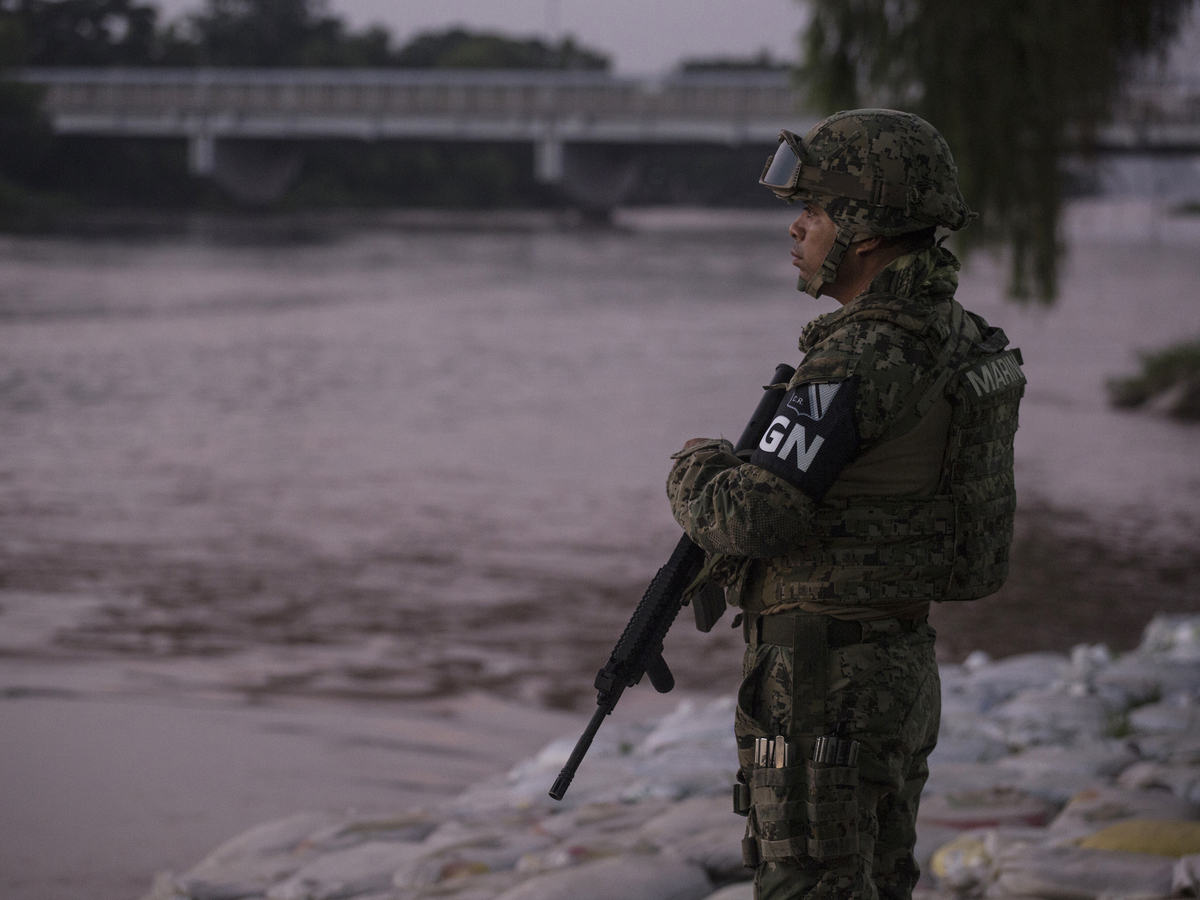 Mexico's immigration agency added more checkpoints on highways in the south, where they search buses and cars for undocumented migrants. Officials have stepped up raids of a freight train people call La Bestia, or The Beast — long known as a quick and free, but risky, way for migrants to travel north. Several bus companies in the country now require immigration documents to purchase a ticket.

The Mexican government is hiring new immigration agents as well as transferring federal police to the institution. But 500 immigration agents were fired in June as part of an anti-corruption effort, according to the agency's new director, Francisco Garduño Yáñez. He said many had been involved in human trafficking and extorting migrants.

Mexico also said it would dismantle people-smuggling networks. While a few large trucks have been caught secretly carrying dozens or hundreds of migrants north, these busts were fairly common before the surge and Mexico has yet to detail advances on breaking up smuggling networks. Some reporting suggests smugglers continue to thrive.

It can take months or even years to wait for asylum in the United States. Mexico agreed with the U.S. to expand the Migrant Protection Protocols, a program commonly known as "Remain in Mexico." Under MPP, some of the migrants crossing the border to request asylum in the U.S. are sent back to Mexico to wait for their day in U.S. immigration court.

But there are problems with the program. Asylum-seekers are sent to cities including Tijuana, Ciudad Juárez and Nuevo Laredo, some of the most violent in Mexico. Migrants in the program have reported being kidnapped, extorted and raped after returning to Mexico. Government and nonprofit shelters are overwhelmed and migrants say they receive little or no support from the Mexican government. The conditions are so bad that many asylum-seekers have voluntarily been bused back to their home countries by Mexican and United Nations authorities.

The legal process for people under MPP is confusing, constantly changing and erodes due process, according to lawyers representing the asylum-seekers. Human rights advocates say migrants detained in Mexico are often denied the opportunity to request asylum before being deported.

Mexican authorities have registered a record number of people seeking asylum in Mexico this year. The national refugee agency says 31,355 people requested asylum in Mexico in the first half of 2019, the largest portion of whom were from Honduras. That is already more than last year's overall total. With an annual budget of just $1.2 million, the agency's director says, it needs more funds and resources to process the applications and resettle those granted protection. The country granted asylum in 53% of completed cases in 2018, led by a 98% approval rate for Venezuelans. Roughly a third of Guatemalan, Honduran and Salvadoran applicants were granted asylum here in 2018.

Since 2014, Washington has provided more than $100 million to help Mexico with immigration control, including equipment and training, according to a Congressional Research Service report published last month. The U.S. has allocated millions more in asylum and refugee assistance for Mexico. But the June deal did not include additional support.

Is this the first time Mexico has cracked down on migrants?

No. Mexico's last major immigration enforcement effort started in 2014, after thousands of unaccompanied minors from Central America arrived at the U.S. border. Mexico launched the Southern Border Plan with support of the armed forces to catch migrants at a geographical bottleneck in southern Mexico called the Tehuantepec Isthmus. Subsequently, the U.S. began providing financial support and training to Mexican immigration authorities through the Mérida Initiative. In 2015, In the first full year of this plan, Mexico increased migrant apprehensions by 50% to 180,000 and deportations by 68% to 177,000, but those numbers have ebbed and flowed since. Some experts see the current efforts as a ramp-up of the Southern Border Plan.

What have been the results this time?

In June 2019, in the weeks following the deal the Trump administration reached with Mexico's government, the U.S. saw a 28% drop in the number of people detained after crossing the Southwest border, the first decrease in a year. A number of factors including, summer heat, were probably at work, but the decline was likely driven in part by Mexican enforcement.

These trends could waver as the number of people traveling toward the U.S. usually drops in hotter summer months.

The Remain in Mexico plan has also expanded in recent weeks since the U.S.-Mexico deal. From Jan. 26 when the program began until April 8 (when the program was briefly suspended), the U.S. returned 1,323 people to Mexico. From April 16 until June 7, another 9,060 were returned to Mexico. Since the U.S.-Mexico deal was signed June 7, another 8,110 have been sent back to Mexico, nearly doubling the total of the previous four months combined. As of July 7, a total of 18,503 people had been sent back to Mexico, according to the country's National Migration Institute.

Who is getting caught in the dragnet and why are they leaving their countries? 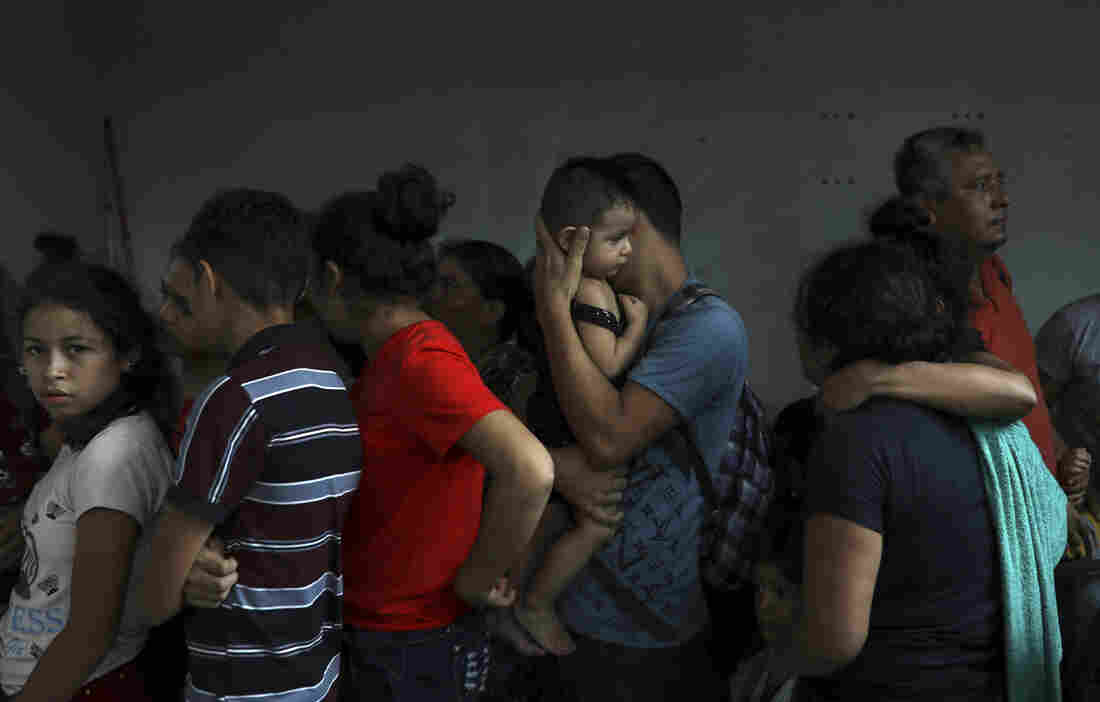 Detained migrants huddle together in a storage room at the back of the Azteca Hotel where they tried to hide from Mexican immigration agents conducting a raid, in Veracruz, Mexico, June 27. Under increasing U.S. pressure to reduce the flow of Central Americans through Mexican territory, Mexico's government has stepped up enforcement. Felix Marquez/AP hide caption 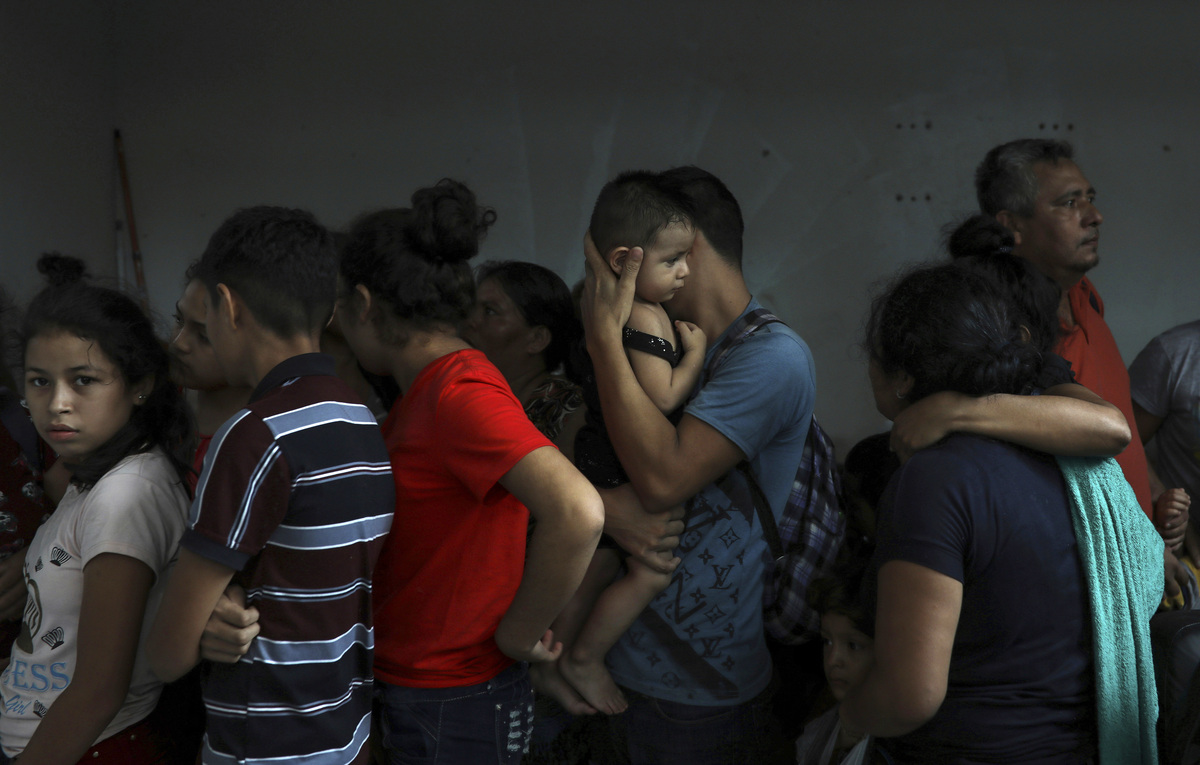 Detained migrants huddle together in a storage room at the back of the Azteca Hotel where they tried to hide from Mexican immigration agents conducting a raid, in Veracruz, Mexico, June 27. Under increasing U.S. pressure to reduce the flow of Central Americans through Mexican territory, Mexico's government has stepped up enforcement.

Most migrants Mexico has detained in 2019 come from Central America. Hondurans represent 46%, Guatemalans 26%, and Salvadorans 10% of the total migrants apprehended by Mexico this year.

Much of the region called the Northern Triangle — Guatemala, Honduras and El Salvador — continues to suffer from violent crime, poverty, climate change and other factors that have driven families to flee in droves.

Smaller groups include Haitians (3%) and Cubans (5%). Some Haitians are fleeing economic and political instability, while others previously escaped after the 2011 earthquake and have spent years traveling from country to country in the Americas.

Fear, Confusion And Separation As Trump Administration Sends Migrants Back To Mexico

The reason Cubans travel through Mexico largely goes back to President Barack Obama ending a Cold War-era policy that allowed Cubans fleeing the country to be eligible for U.S. residency a year after setting foot on U.S. soil. So instead of Cubans trying to reach the U.S. by sea, which could lead to quick arrest and deportation, they now fly to other nearby countries like Nicaragua and Guyana and make their way over land to the U.S.-Mexico border to request asylum.

Many Nicaraguans, who make up 2% of those detained, are fleeing their country's prolonged political crisis marked by repression and political persecution from President Daniel Ortega.

Other migrants traveling through Mexico come from as far as Africa and Asia. More than 1,000 Cameroonians have been detained in Mexico so far this year, as a violent conflict in the central African nation between its majority French-speaking and minority English-speaking populations continues. More than 1,000 Congolese have also been caught passing through Mexico, as years of brutal conflict continue to force people out. Hundreds of migrants from Angola, India, Bangladesh and Sri Lanka have also been detained in Mexico this year.

Why they all choose the U.S. as their destination varies, largely combining reasons related to safety, economic opportunity and family ties in the country.

What is the end goal?

The Trump administration says it wants to reduce the number of Central American immigrants and asylum-seekers crossing the Southwestern border. The U.S.-Mexico agreement says: "Both parties also agree that, in the event the measures adopted do not have the expected results, they will take further actions. Therefore, the United States and Mexico will continue their discussions on the terms of additional understandings to address irregular migrant flows and asylum issues, to be completed and announced within 90 days, if necessary."

But it never says what "expected results" means. The countries agreed to reconvene after 45 days from the start of the deal, roughly in late July, to assess progress. But there is no protocol for what happens then.

After long criticizing Mexico's handling of immigration, President Trump told reporters in the Oval Office on July 1 that he was pleased with Mexico's recent efforts.

The lack of clear goals leaves Mexico in a weak bargaining position. It also leaves the country vulnerable to factors outside its control, like a worsening crisis in any of the migrants' home countries.

Additionally, Mexico may not gain anything from the agreement as it stands, beyond improving its immigration control. But it can hold off U.S. tariffs, a pressure tactic President Trump has used on other countries. If Mexico fails to satisfy Trump's demands, the next step could for Mexico to enter into a "safe third country" agreement with the U.S. That would mean that asylum-seekers who travel through Mexico would have to apply for protection in that country, and would be ineligible to do so in U.S.

Mexico may be stopping more migrants from getting to the U.S. and taking in more asylum-seekers for now, but there's no evidence yet of progress toward "resolving the humanitarian emergency and security situation," as the agreement says.