Accessibility links
New Zealand Holds Its First Gun Buyback Since ChristChurch Shootings In response to the March shootings that left 51 people dead, the nation's gun buyback program asks owners of now-banned weapons to turn them in to police departments for cash. 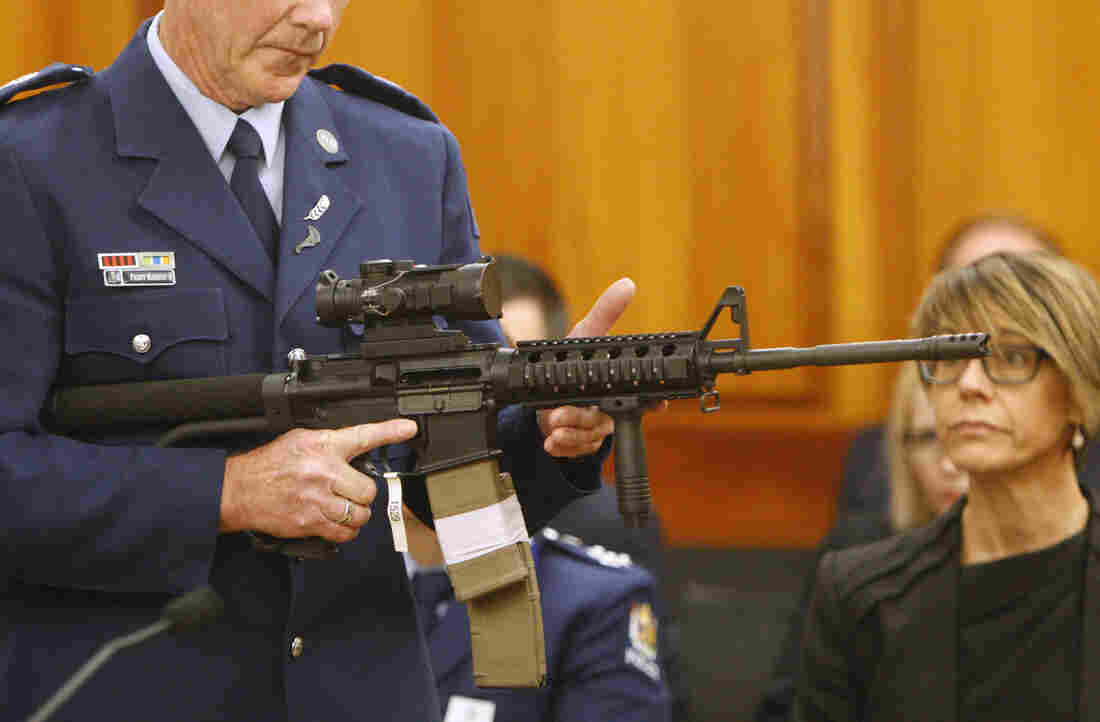 New Zealand's first gun buyback in the wake of the Christchurch shooting attracted more than 150 gun owners on Saturday, according to law enforcement officials.

The buyback, which took place in Christchurch, is the first of more than 250 planned nationwide this year.

Gun owners turned in 224 recently banned semi-automatic weapons and more than 200 banned gun parts, receiving a total of NZ $433,682, or nearly $300,000, said Mike Johnson, police commander for the Canterbury Region, which includes the city of Christchurch.

Johnson said he was "ecstatic" with the turnout, which he said was strong despite concerns from local gun rights groups that gun owners participating in the buyback might be demonized.

This first buyback comes four months after a gunman entered two mosques in Christchurch, killed 51 people and injured dozens more. The alleged gunman is now facing 51 charges of murder, 40 charges of attempted murder and one charge of engaging in a terrorist act. He has pleaded not guilty to all charges. His trial is expected to begin in May of next year.

In the aftermath of the shooting, New Zealand's parliament voted 119-1 to pass a bill banning most semi-automatic weapons, as well as parts that allow lower-powered firearms to modified into higher-powered ones. At the bill's final reading, Prime Minister Jacinda Ardern, who has garnered international recognition for her swift response to the shooting, gave an impassioned speech. She spoke of visiting gunshot victims in the hospital and of being shocked by the extent of their injuries.

"I could not fathom how weapons that could cause such destruction and large-scale death could be obtained legally in this country," she said.

New Zealand's gun control laws were already relatively strict compared to those of the U.S. Still, the nation has rarely denied gun licenses to applicants. Before April, citizens as young as 16 years old could obtain "Category-A licenses," which allowed them to purchase the types of semi-automatic weapons that the New Zealand parliament has now banned.

New Zealand does not track the vast majority of its gun sales, so the total amount of weapons in the country is unknown. According to estimates, the country likely has somewhere between 1.2 and 1.5 million guns across its 4.6 million residents — or roughly one weapon for every three residents.

The island nation's response to the Christchurch shooting has reverberated throughout the United States, where mass shootings that leave at least four people injured or dead happen, on average, every day. Gun control advocates like Shannon Watts at Everytown for Gun Safety's Moms Demand campaign said New Zealand's swift actions "stand in stark contrast to the U.S."

The NRA has criticized the New Zealand government's response to the shooting, saying gun control advocates were politicizing the tragedy in order to push through policy changes.

Andrew Patrick, media director of The Coalition To Stop Gun Violence, said the nationwide gun buyback plan demonstrates the type of "action and accountability in response to a horrific mass shooting that is unfortunately missing in the United States of America. When it comes to moral and legislative responses to gun violence, American politicians could learn a lot by looking toward this small island in the South Pacific."