Accessibility links
Jackie Sibblies Drury On 'Fairview,' A Pulitzer-Winning Play About Being Watched It starts with a perfect black family in a model household, like a '70s sitcom. Then it gets weird. Playwright Jackie Sibblies Drury says she was inspired by an experience with police surveillance. In Fairview, a respectable African American family prepares for a big dinner. But we slowly learn there's something off about Keisha (MaYaa Boateng) and her relatives. Julieta Cervantes/Soho Rep hide caption 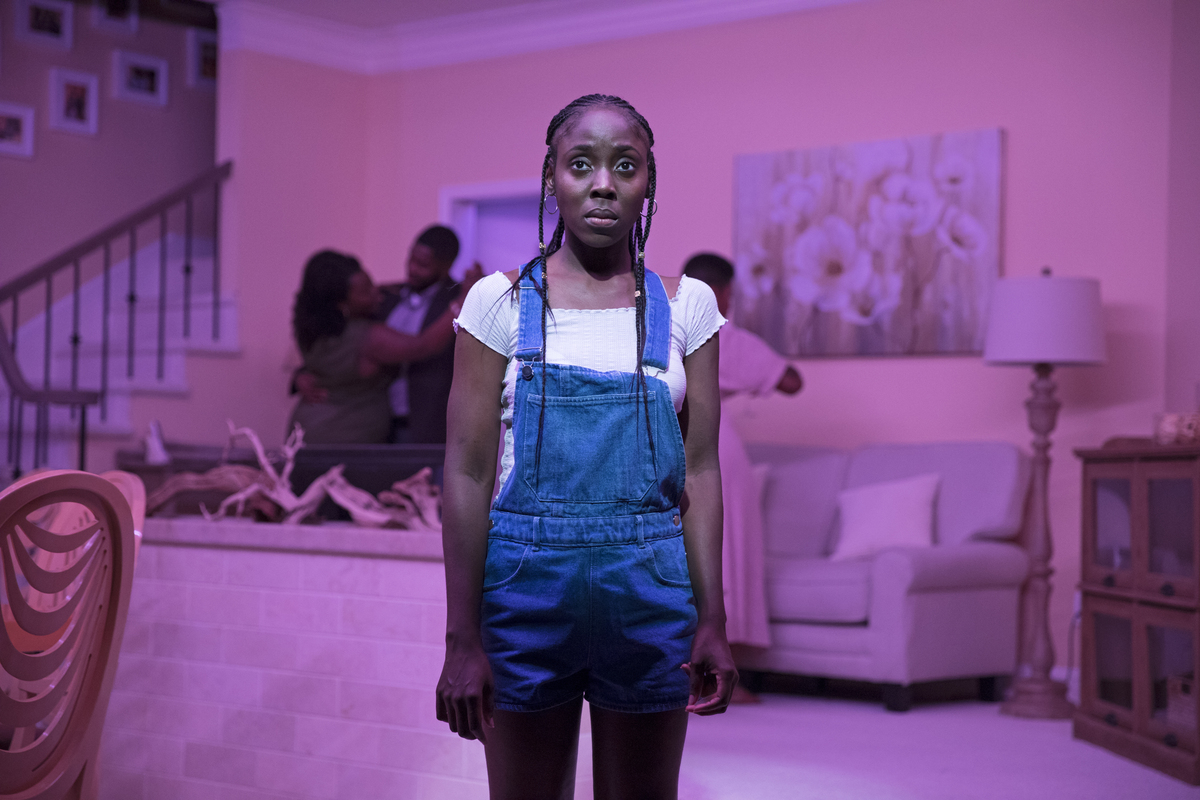 In Fairview, a respectable African American family prepares for a big dinner. But we slowly learn there's something off about Keisha (MaYaa Boateng) and her relatives.

The play Fairview has won all kinds of acclaim from critics and audiences, including the 2019 Pulitzer Prize for playwright Jackie Sibblies Drury. It first ran last year at Soho Rep in Manhattan, and has now been remounted this summer at Theatre for a New Audience's home, Polonsky Shakespeare Center in Brooklyn.

If for some reason you only caught the first few minutes, you'd probably wonder what all the fuss was about. A middle-class black family in a carefully decorated townhouse prepares a birthday dinner for grandma — a setup, perhaps, out of a '70s sitcom.

Then things start to get weird, and then really, really weird. To say much more would be a spoiler, but the banality of it all does become central to the play's final (and deeply uncomfortable) punch.

That concept came out of conversations with director Sarah Benson, Sibblies Drury says.

"We were both really interested in thinking about surveillance and why surveillance affects people of color in a deeper way," she says in an interview. "And this idea of being watched by someone as a person of color — there is automatically some sort of sense of suspicion, especially if the watcher is a white person. And so we started from a place of trying to create what in the theater felt like a normal black family, and then introducing the idea of someone watching that family — and that watching [changes] their behavior and the course of their lives."

As for the initial idea, she says that came out of a personal experience with police surveillance while living with her husband, an anthropologist, in a contested region of North Africa.

"And there was something about the surveillance being embodied — like, you could see a dude wearing a sweater walking behind you — that it just felt more low-tech and in-person than I was used to thinking about surveillance," Sibblies Drury says. "But it also didn't feel completely unfamiliar. There is a lot about being a person of color in America that — that experience of someone watching me with suspicion, sort of expecting me to do something ... bad or illegal — that felt familiar. And so that really was the impetus, at least for me."

On the "beige," generically perfect quality of the set

The set was designed by Mimi Lien, who is incredible. And we definitely — she and I and Sarah [Benson] — talked a lot about like the class of the family, and just basically different markers of their race and also socioeconomic background generally. ... Mimi went down this crazy Internet rabbit hole of looking at different McMansions and different developments; for a while she was watching an O.J. Simpson documentary just to see what his house was like. Just thinking about different black people of means and the ways that that can be expressed in a very particular ... "showroom," trying-to-have-everything-be-a-little-bit-perfect kind of a way.

And I think that we were all really interested in that because eventually over the course of the play — and I don't want to spoil anything, but — other people start to project their own versions of blackness onto these characters. And I wanted to be sure that there was no inkling of these other kinds of stereotypes from the start — that the people that we met and the family that we met feels familiar, because they feel like upwardly mobile black people that we've seen before, like on sitcoms or in well-made plays. And so we were really excited to have them feel kind of perfect — but in a way where there was also a sense of dread of what was going to happen to them to make them not perfect.

On the critical response to the play

There was something that was so interesting about a lot of the criticism — that it felt very subjective. And that's not something that we always allow our critics to do. And so I feel like a lot of really interesting pieces were written in response to the play, which I find gratifying ... because the play tries to point to whiteness not as the norm, or not as invisible, but as a particular vantage that that can be damaging to other races. ... Not all of the critics that wrote reviews of the play are white, but most critics for theater are white. And so it was really, I thought, neat to see people engage with that and talk about their place in this ecosystem of art and criticism and journalism. It was really exciting.

A huge section of the play is basically one giant microaggression, in a way. And it lasts for so long. And it's just very thorough in its aggressiveness. So that those things that are really hard to describe — those, like, "Oh, I'm sure that person didn't mean to cut in front of you — she just didn't see you," or "I'm sure that that person didn't cross the street — she was just going into her apartment building," those things that people say to people of color to either try to make them feel better, or to ignore their actual lived experience — it seemed like we tried to show them so that people would realize that, "No, you're not being crazy — that person is watching you to make sure that you don't shoplift in that store."

I think that I just have really, deeply been moved by [the fact] that the people are having very different reactions in the same audience — and that the reactions don't fall distinctly along color lines. It's not that all people of color are moved by it, and all white people are uncomfortable and angered. It seems much more complex than that. And that to me has been really deeply exciting as a human and as an artist.

On people who have walked out on the play

Different people have left for really, really different reasons, I think. Like, some people have left because they've come in expecting to see a very serious play about very capital-S serious issues, and then they're presented with a light-hearted comedy [before the play turns], and they think it's not for them and they leave right away. And then I think that some people also leave because sometimes characters in the play say things that they find offensive, and rather than sitting and asking themselves why the characters are saying things that are offensive, they are simply offended, shut down and leave. Which I also understand — that's a perfectly human response to being offended.

But ... in the [current] run that's been happening in Brooklyn at Theatre for a New Audience, I don't think that very many people have left. And I think that that might be because of the Pulitzer Prize, because of the prestige that that brings — that it makes people more patient with the play than they might otherwise be. Which is nice, because we've tried to create an experience that's a 90-minute-long experience, and so it really only makes sense if you're able to sit through the whole thing. And so I'm really grateful that the seriousness of the prize has extended people's patience for something that can be uncomfortable in parts.

On what she likes about theater

I grew up as a theater dork who memorized all the lyrics to Rent and Les Mis, and I was in plays in elementary school after school always. And so ... even as I grew older and experienced other things, I just — I really like the form. I like that you have to be in a room with other people. I like that you hear other people cough, and you get annoyed at people who have big hair sitting in front of you, and that there's just this crazy, embodied experience. And so I like that a lot of different people can come into a room and have a similar point of focus, but really, really different experiences. And that just is something that is inspiring to me.

Leena Sanzgiri and Tinbete Ermyas produced and edited this interview for broadcast. Patrick Jarenwattananon adapted it for the Web.

The play Fairview is being remounted this summer at Polonsky Shakespeare Center in Brooklyn, N.Y., the home of Theatre for a New Audience.