Accessibility links
NPR Review: 'The Chain,' By Adrian McKinty In Adrian McKinty's propulsive new thriller, an organization called The Chain kidnaps children, and forces the parents to kidnap another child in turn in order to rescue their own 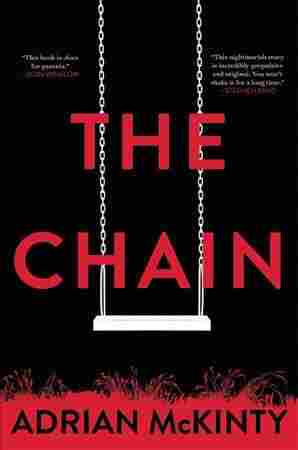 If your child was kidnapped, how far would you go to get her back? In the movie Taken, Liam Neeson's retired CIA officer chases one man to his death, tortures another and kills a half dozen more. Good for him: Those were the bad guys, after all. But would we root for him if he kidnapped another person's — an innocent person's — child?

In Adrian McKinty's thriller The Chain, that's precisely what the victims are required to do. That, or lose their own children forever.

One evening, driving in her car, Rachel O'Neill gets a phone call. The woman on the line tells Rachel she has kidnapped her daughter. To get her daughter back alive, Rachel must not only pay a ransom, but also do the unthinkable: Take someone else's child, and assume the role of kidnapper herself. Only when Rachel is a victim, a perpetrator, has herself driven someone else to commit a kidnapping and has had to accept that she might have to kill a child to save her own, only then will Rachel's daughter be released.

The Chain sounds like the kind of horrifying crime ring that might prey on wealthy businesspeople in far-off places ravaged by drugs or gangs. But this abduction happens in the beachy community of Plum Island, Mass. Rachel is a part-time philosophy lecturer; divorced, recovering from cancer and struggling to make ends meet. When The Chain chooses her, it's as though she has opened the door of her car in a supermarket parking lot and found herself stepping into hell.

That darkness and corruption dwell behind the shiny, happy façade of middle-class life is a common enough theme in American storytelling. In 'The Chain,' McKinty hooks the motif up to a power supply, connects it to wi-fi and plunges it into the Dark Web.

That darkness and corruption dwell behind the shiny, happy façade of middle-class life is a common enough theme in American storytelling. In The Chain, McKinty hooks the motif up to a power supply, connects it to wi-fi and plunges it into the Dark Web, where The Chain slithers like a basilisk, feeding on our obsession with social media, and our blithe ignorance of online privacy and security. And where it moves at the speed of a T3 connection: Its victims want to get their children back as quickly as possible, so they race through their tasks, funneling huge amounts of money to The Chain's creators. McKinty's writing is paced to match. In his Sean Duffy series of police procedurals, he writes with a dry humor that often tips into hilarity, but there's none of that here. The Chain is a straight-up, stone-faced thriller, a present-tense race to find out how Rachel will react to the unthinkable and then find a way to do the unthinkable herself.

Rachel isn't alone. She has a brother-in-law, a former Marine officer who at first glance looks as though he might possess the "particular set of skills" that will be required to come through this situation — until his flaws come to light. Fortunately, her daughter Kylie is made of stern stuff, and as Rachel moves from task to task at the behest of The Chain, she finds out what stuff she herself is made of, too. And how far into the darkness she is prepared to go.

Over and over as you read, you'll find yourself asking, Would I do this? And then, in the moments where McKinty gives readers a breather, Who would do this? Who would create something as evil as The Chain? And as brilliant — The Chain is a superb construct; it's a self-perpetuating, self-disciplining system that relies on fact that the vast majority of kidnappings are resolved quickly, bloodlessly and profitably.

We catch glimpses of them. But McKinty waits until the last third of the book to reveal who created The Chain, and how they run it, day-to-day. It's an infuriating choice, to torture the reader this way, but it's the smart one. Flashbacks inevitably slow a narrative down, and The Chain is all about momentum. Sometimes, though, it feels as though it moves a little too fast. At the peak of the action, discordant notes pop out: A revolver with a safety catch; a Massachusetts colloquialism that doesn't ring quite true. But these are just tiny bumps, loose pebbles on the rails of an otherwise thunderous ride into the darkest, most fearful reaches of a parent's mind.

If it was your child, what would you do?

Paddy Hirsch is an editor at NPR's Planet Money.