Accessibility links
'The Golden Hour' Is A Refreshingly Bittersweet Read Beatriz Williams' new novel follows a woman searching for her missing husband in London during World War II, jumping back and forth in time to show all the people and events that led her there. 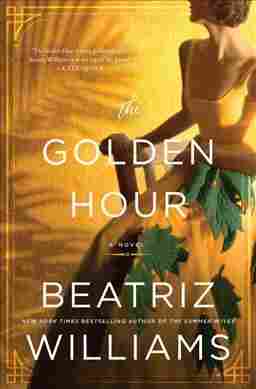 War is a brutal black hole that rips families apart, separating children from their mothers, husbands from their wives, and lovers from their secrets. War also spurs people to extremes — extreme passions, acts of courage, and ultimately — hope.

Beatriz Williams' new historical novel The Golden Hour tells the story of two strong but flawed women who find the strength within themselves to accomplish the impossible in a war-torn world. (That's a given with Williams; her novels are packed with complex, daring and intriguingly human women.)

From the opening chapter, the book brims with mystery and danger. The first person we meet is Mrs. Thorpe (the former Lenora "Lulu" Randolph), who's in London in 1943, seeking information to help free her husband, Benedict Thorpe, from a German prison camp.

From here, the story rewinds two years to the Bahamas, in 1941, where Lulu first meets Benedict on a flight into Nassau — and we're off. Williams slips back and forth from location to location, from 1943 to 1941 and farther back to the turn of the century, raising the suspense bar higher and higher as we dive deeper into the lives of two memorable female characters.

But the link between The Golden Hour's settings — the Bahamas and London during World War II and Switzerland and Germany 40 years earlier — is all about the men. Two Englishmen, both named Thorpe, both with ginger hair, are the strong backs that carry the story.

In 1941 Nassau, Benedict Thorpe introduces himself as a botanist to Lulu, then an American journalist arriving on the island to write a society news column about the Duke and Duchess of Windsor. Lulu refuses to call Benedict by his first name; she also suspects his profession is something more lethal than botany, especially after he uses some martial skills to render a too-handsy passenger unconscious on their flight.

Jumping farther back to Switzerland in 1900, Williams introduces Elfriede von Kleist, who's taken refuge in an infirmary after the birth of her son Johann, for "an extreme form of melancholy" that led to a suicide attempt. There, she meets military man Wilfred Thorpe, who is recovering from pneumonia. Elfriede plays Chopin in the evenings, and the soothing music and the soothing conversations lead to a close friendship with Wilfred that quickly evolves into something more. Then suddenly, Elfriede must return home to her husband and her son, but Wilfred writes to her regularly, and eventually, they are reunited — for a time.

Throughout the novel, the relationships of these two women and their Thorpe men follow similar ups and downs, while remaining distinct stories. Lulu and Elfriede face obstacles in vastly different ways: Lulu is direct and unflinching, while Elfriede is thoughtful but surprisingly unconventional, her struggles with depression a lifelong challenge. Nonetheless, each loves her Englishman fiercely. The Thorpes are no less dedicated to the women they love, although war and duty are of critical importance too.

Lulu's Bahamas storyline acknowledges the American obsession with British royalty — but thankfully also delves into the not-so-glamorous politics of the times. The Duke of Windsor, having abdicated the English throne, was Nassau's governor from 1940 to 1945, and during these years, the city was rife with greed, racial tension, and murder. For example, the Bay Street Boys, a group of wealthy white merchants, maintained discriminatory employment practices (low pay for black workers) that contributed to the 1942 Burma Road Riots — the backdrop for a pivotal sequence in the novel.

... the novel reminded me of fresh taffy. Warm, salty, a little bitter, and sweet — it pulls the reader in steadily without breaking apart.

Meanwhile, Elfriede's navigation through the world of German nobility delivers some of the book's most heartbreaking and heart-stopping chapters. Her conflict with Herr von Kleist's eldest sister is particularly epic.

Although I enjoyed Williams's diligence in bringing Nassau's history to the page, I felt a bit shortchanged at times. I longed for a couple more scenes with the Duke and Duchess of Windsor and some of the other historical characters. I also was distracted by some of the dialogue of the Bahamian supporting characters (particularly Lulu's house servant), which didn't read as authentically as some of the other voices.

All in all, however, the novel reminded me of fresh taffy. Warm, salty, a little bitter, and sweet — it pulls the reader in steadily without breaking apart. Elegant prose and imagery grace every page.

And let's not forget the watering hole at Nassau's Prince George Hotel, and Jack, the bartender who gave me a Casablanca vibe. When he serves Lulu a gin and tonic with "fresh ice, fresh lime, fresh gin, fresh tonic" it was a delightful moment, a thirst-quencher, that tempted me (and I don't like gin) to indulge. But if a gin and tonic isn't on the menu, perhaps a trip to the beach with The Golden Hour in tow would do just fine.

Denny S. Bryce writes historical fiction and urban fantasy. Her first novel, Wild Women and the Blues, is set for release in 2021. You can follow her on Twitter: @dennysbryce.