Accessibility links
Science Explains Weird And Emotional Airplane Behavior The reason some passengers weep uncontrollably or order strange beverages in the sky might be related to high levels of noise and air pressure in the cabin.

Cool Your Jets! Science Might Explain Your Weird And Emotional Airplane Behavior

Cool Your Jets! Science Might Explain Your Weird And Emotional Airplane Behavior 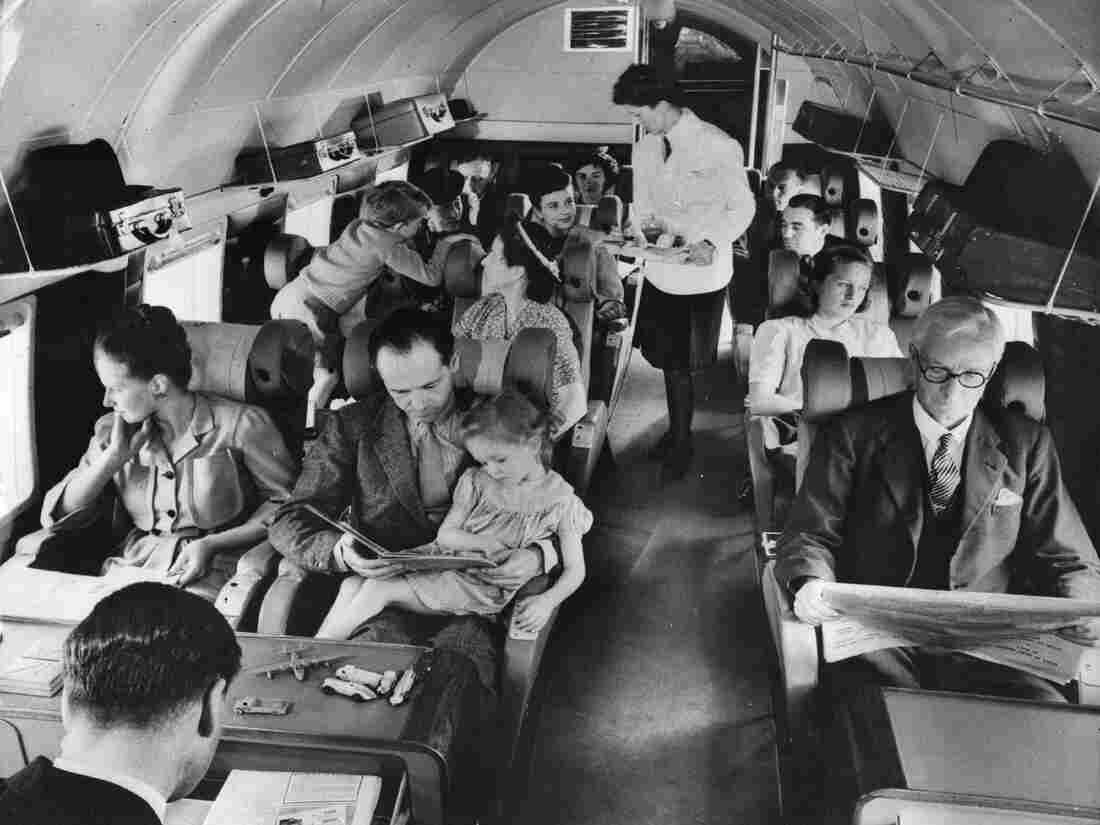 Airplane passengers fly on a British plane in 1960. Travelers can often exhibit bizarre behaviors as a result of the conditions within the airplane cabin. Fox Photos/Getty Images hide caption 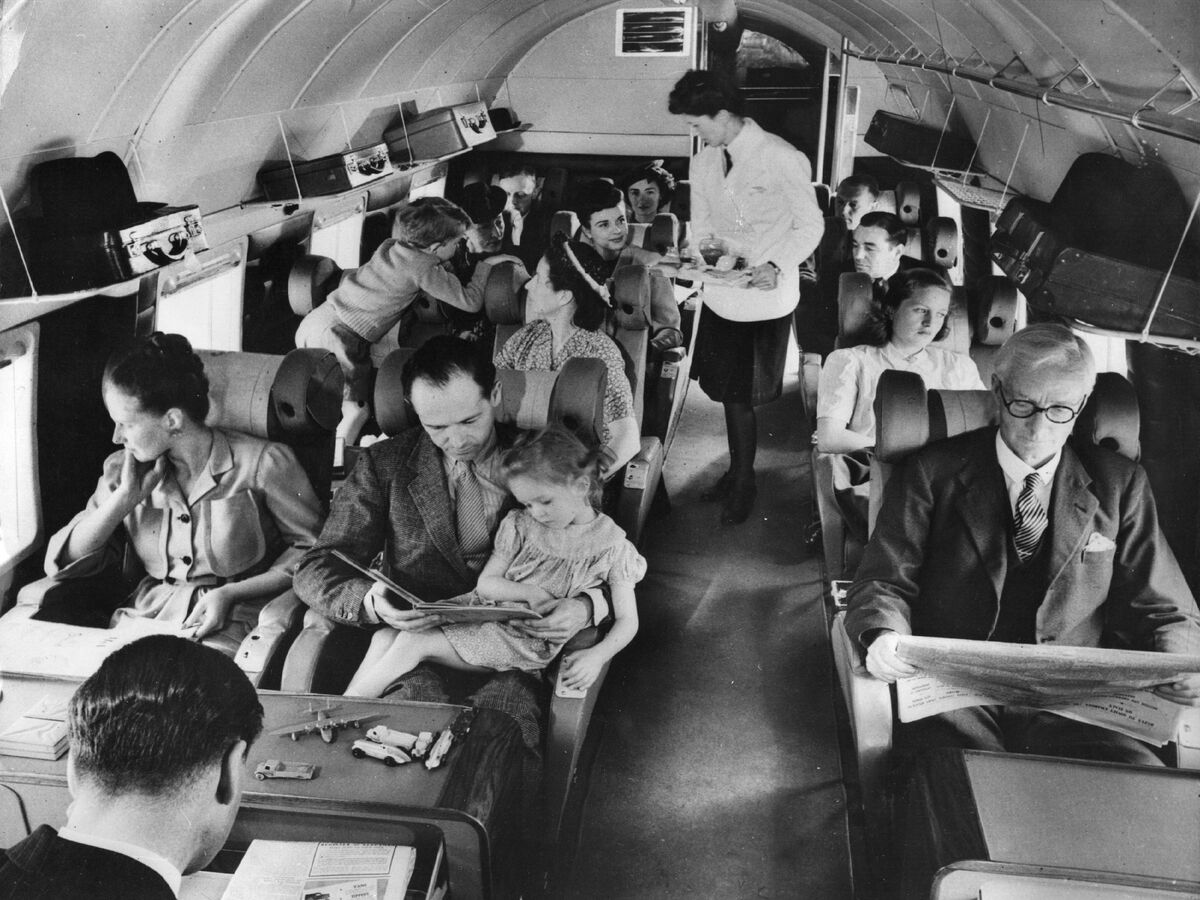 Airplane passengers fly on a British plane in 1960. Travelers can often exhibit bizarre behaviors as a result of the conditions within the airplane cabin.

Amanda Wind, an airline passenger taking an early morning flight, felt tears welling up in her eyes. Soon, her sobs were so loud, she had roused several other passengers from their sleep.

Her uncontrollable crying is not out of the ordinary. Neither are bizarre beverage orders, tirades against flight attendants or intimate bonds forged with seatmate strangers.

"When people get on a plane, they revert to a lizard brain where they forget all social decencies and common sense," Kat Anderson, a flight attendant who has seen her fair share of oddities through three years of accommodating travelers, tells NPR's Weekend Edition.

"Flying takes away everybody's sense of control. So people tend to grasp at whatever kind of control they can have, whether that be yelling about overhead bin space above their seat, or yelling about having to check their bag or whatever."

The Boston Globe investigated our propensity for strange behavior on flights and found that the incapacity to regulate emotion might have a scientific explanation. Low air pressure reduces the oxygen in our blood and can affect our decision-making and emotions.

The symptoms, related to hypoxia, are probably part of what caused airline passenger Wind's Bradley Cooper-induced sob-fest, a phenomenon so common there's a term for it.

Wind is now a card-carrying member of the "Mile Cry Club" – she's joined by Alan Perez, another tearful airline passenger.

"On my last flight, I was watching Crazy Rich Asians, and I was sobbing pretty bad," Perez says. "And with my blanket and my pillow, I hid my face a little. I don't know why I was ashamed, but I also didn't want the guy next to me to worry about me."

Is there something about being on an airplane that makes you cry more during movies? I definitely cry more.

Perez exhibits other odd behaviors while flying. Like other passengers, his cravings are different in the friendly skies.

"I usually never drink ginger ale, but every time I'm on a flight, I always get ginger ale with ice," Perez says. "And I always eat the ice afterward."

Flight attendant Anderson says Perez is in the norm, joined by passengers who hanker for a glass of tomato juice.

me, on land: what kinda goddam freak drinks tomato juice

Don’t know why but my drink of choice on an airplane is always ginger ale. I don’t drink it any other time except when I’m 10,000+ feet in the air

I have this weird habit of ordering tomato juice as my in flight beverage of choice. You won't catch me drinking it off an airplane.

"Ginger ale is probably one of our most ordered drinks," Anderson says. "Same with tomato juice, where ... you don't normally order something like that at a restaurant. But people get on the plane and they just crave it."

Cornell researchers think that high noise levels lower our ability to taste sweet things and draw us to other flavors. One of those flavors is umami, a savory taste category sated by tomatoes.

Though tomato juice is a relatively unpopular drink on the ground, when the beverage cart rolls around, it's in high demand.

Last year, United announced it was removing the beverage from its menu and customers expressed outrage, eventually motivating the airline to reverse its decision.

You say tomato. We say, we hear you. Tomato juice is here to stay. #letscallthewholethingoff https://t.co/R6QskrYE8i

Despite our emotions running wild and our cravings out of control, Anderson reports that flight attendants usually don't judge their passengers' weird behavior.

"It happens enough times and you're like, 'oh well, they're doing that again,' Anderson says. "It just becomes normal."

NPR's Sophia Boyd and Ed McNulty produced and edited this story for broadcast.