Accessibility links
Minority Congresswomen Respond To Trump's 'Go Back' Tweets Four freshman lawmakers, all minorities, targeted in a series of tweets by the president on Sunday denounced his remarks as racist and responsible for "stoking white nationalism." 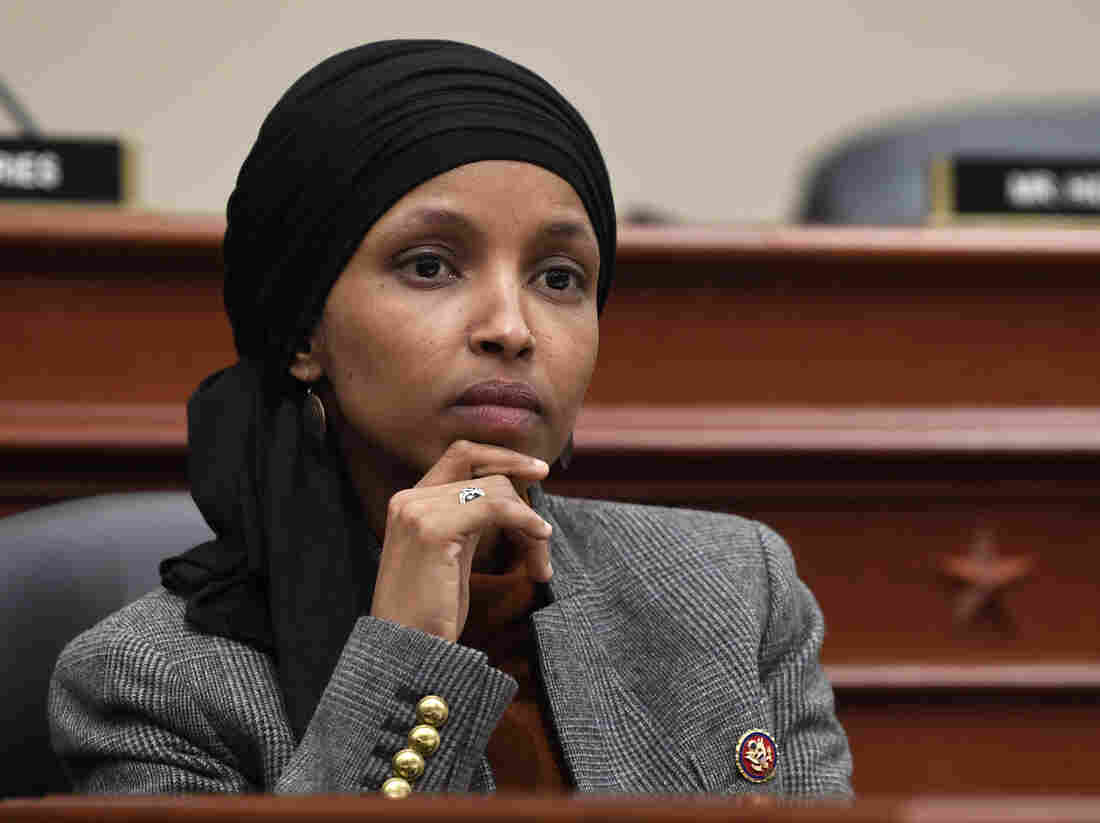 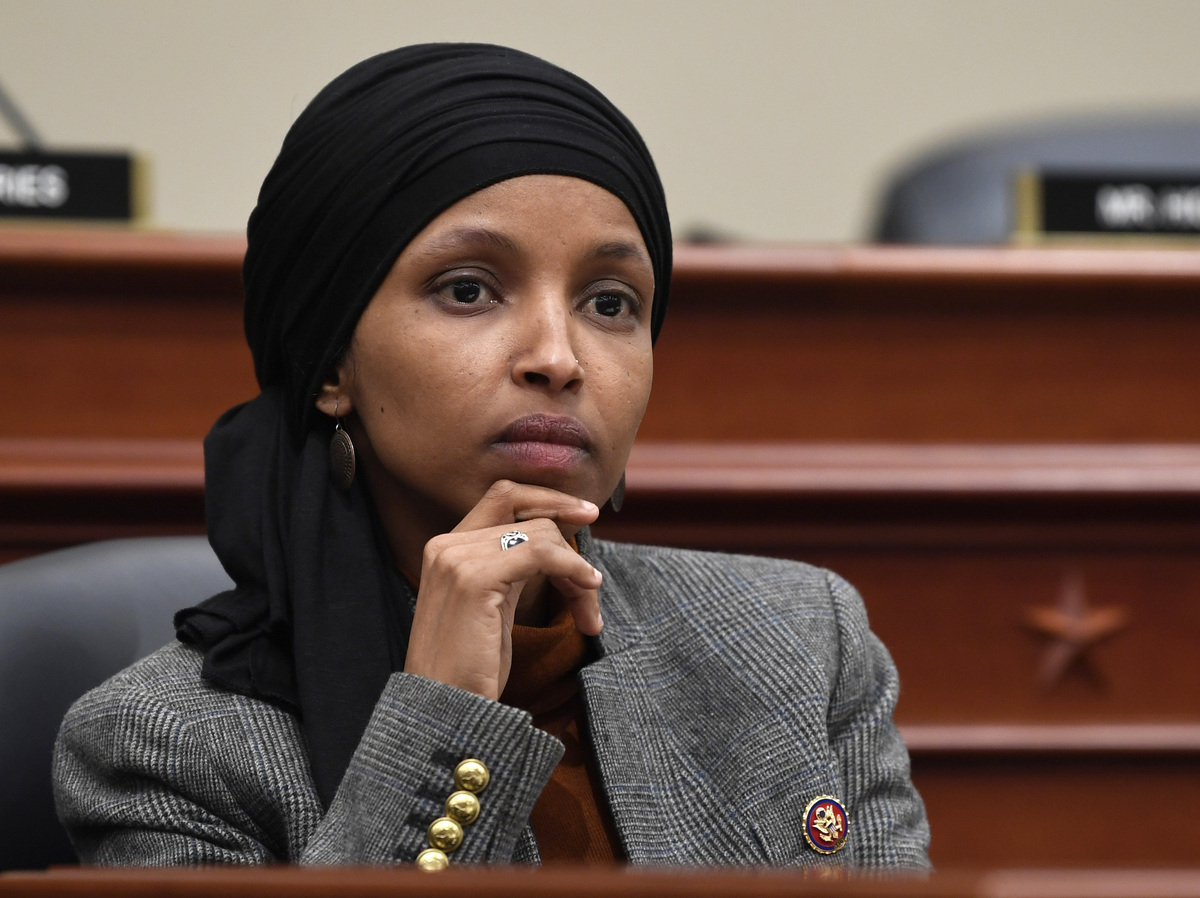 A group of four minority Democratic congresswomen targeted by President Trump in a series of Sunday morning tweets denounced his racist remarks and accused him of "stoking white nationalism."

Weighing in on friction between House Speaker Nancy Pelosi, D-Calif., and four liberal Democrats dubbed "the squad," Trump referred to " 'Progressive' Democrat Congresswomen" in his tweets, saying they should "go back and help fix the totally broken and crime infested places from which they came."

"So interesting to see 'Progressive' Democrat Congresswomen, who originally came from countries whose governments are a complete and total catastrophe, the worst, most corrupt and inept anywhere in the world (if they even have a functioning government at all), now loudly and viciously telling the people of the United States, the greatest and most powerful Nation on earth, how our government is to be run," the president wrote.

Although Trump did not single the lawmakers out by name, four freshmen U.S. representatives known for their progressive views and recent tensions with moderate Democrats viewed the tweets as directed at them: Reps. Alexandria Ocasio-Cortez of New York, Ilhan Omar of Minnesota, Ayanna Pressley of Massachusetts and Rashida Tlaib of Michigan.

As members of Congress, all four women are U.S. citizens. All but Omar were born in the United States. Omar is originally from Somalia, from which she fled as a refugee before settling in the U.S.

The quartet of progressive congresswomen shot back at the president.

Ocasio-Cortez, who was born in the Bronx to parents of Puerto Rican descent, said: "You are angry because you can't conceive of an America that includes us."

Pressley, who was born in Ohio and is black, responded: "THIS is what racism looks like."

Omar replied to Trump by accusing him of "stoking white nationalism." And Tlaib said, "I am fighting corruption in OUR country." She added: "Detroit taught me how to fight for the communities you continue to degrade & attack."

Tlaib was born in Detroit to Palestinian parents. In 2018, she and Omar became the first two Muslim women to ever be elected to Congress.

Trump's decision to highlight the simmering tension inside the Democratic caucus appeared to have one clear effect: uniting the party in defense of the four freshman lawmakers.

Pelosi said that with his tweets, Trump "reaffirms [that] his plan to 'Make America Great Again' has always been about making America white again," adding that Trump's "xenophobic comments" were intended to "divide our nation."

Democratic Rep. Ruben Gallego of Arizona, who is Hispanic, said that despite being born in the U.S., he used to hear "go back to Mexico" growing up, an insult that he encountered even as an adult, despite serving in the Marine Corps and winning a seat in Congress.

"To people like Trump I will never be American enough. So if you wonder why I give no inch to these racists, now you know. Nothing will ever satisfy them, all we can do is stop them," Gallego said on Twitter.

For years, Trump pushed conspiracies that President Obama was not born in the U.S., even making the false claim part of his run for president in 2016. Trump finally conceded in September 2016 that Obama was born in the United States.

Rep. Don Beyer, D-Va., linked Trump's advocacy of the birther movement to his Sunday comments treating his political opponents as outsiders who do not belong in the United States.

"Trump is now turning the same birtherism he directed at President Obama against women of color serving in Congress," Beyer said. "Everyone should call this what it is: racism."

Several members of the Trump administration who made the rounds on Sunday morning TV programs refused to comment or acknowledge the racist remarks.

Ken Cuccinelli, acting director of U.S. Citizenship and Immigration Services, told CNN's Jake Tapper that he was not sure whom Trump was referring to in the tweets.

Other Republicans remained silent on the Trump tweets. But Rep. Justin Amash of Michigan, who has called for Trump to be impeached and recently quit the Republican Party to become an independent, came to the defense of the four congresswomen.

"To tell these American citizens (most of whom were born here) to 'go back' to the 'crime infested places from which they came' is racist and disgusting," Amash said.

Trump responded to criticism on Sunday, tweeting that it was "So sad to see the Democrats sticking up for people who speak so badly of our Country."

"... Whenever confronted, they call their adversaries, including Nancy Pelosi, 'RACIST,' " he continued. "If the Democrat Party wants to continue to condone such disgraceful behavior, then we look even more forward to seeing you at the ballot box in 2020!"