Accessibility links
North Carolina Gerrymandering Trial Could Weaken GOP Influence The case has the potential to significantly alter how political maps are established in North Carolina while serving as a blueprint for legal challenges in other states.

Listen · 3:16 3:16
North Carolina Gerrymandering Trial Could Serve As Blueprint For Other States 3:16 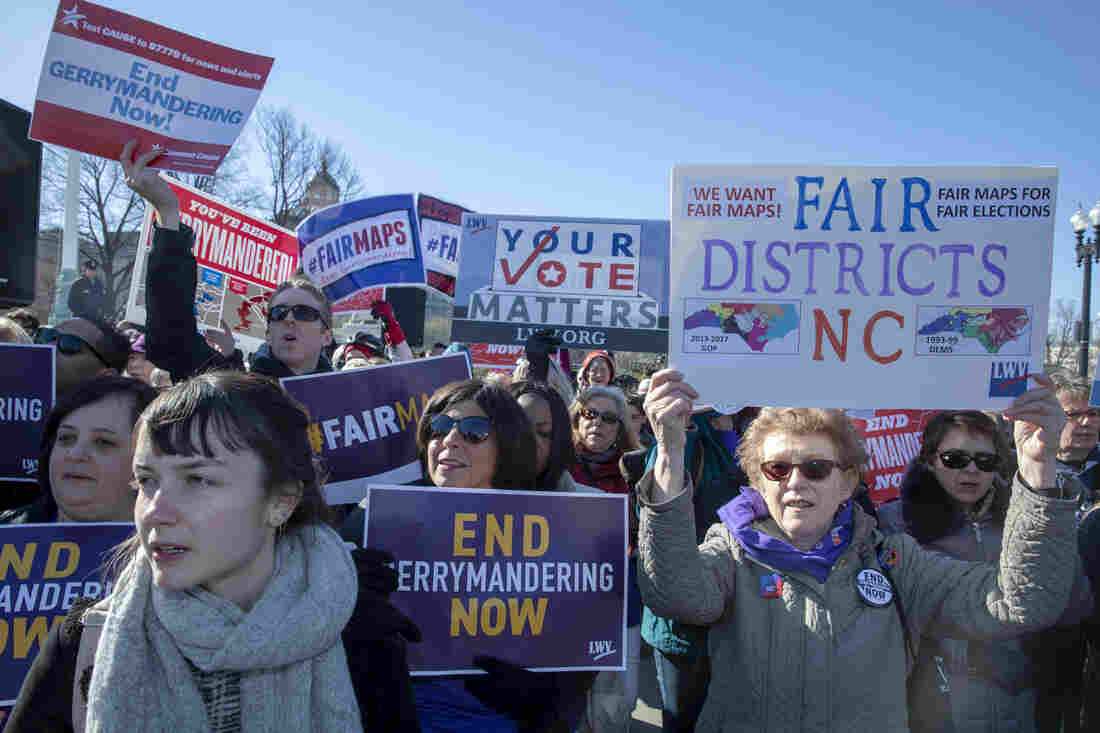 Protesters against gerrymandering at a March 2019 rally coinciding with Supreme Court hearings on major redistricting cases. After the court said the federal judiciary has no role in partisan redistricting cases, legal action is focused on state courts. Tasos Katopodis/Getty Images hide caption 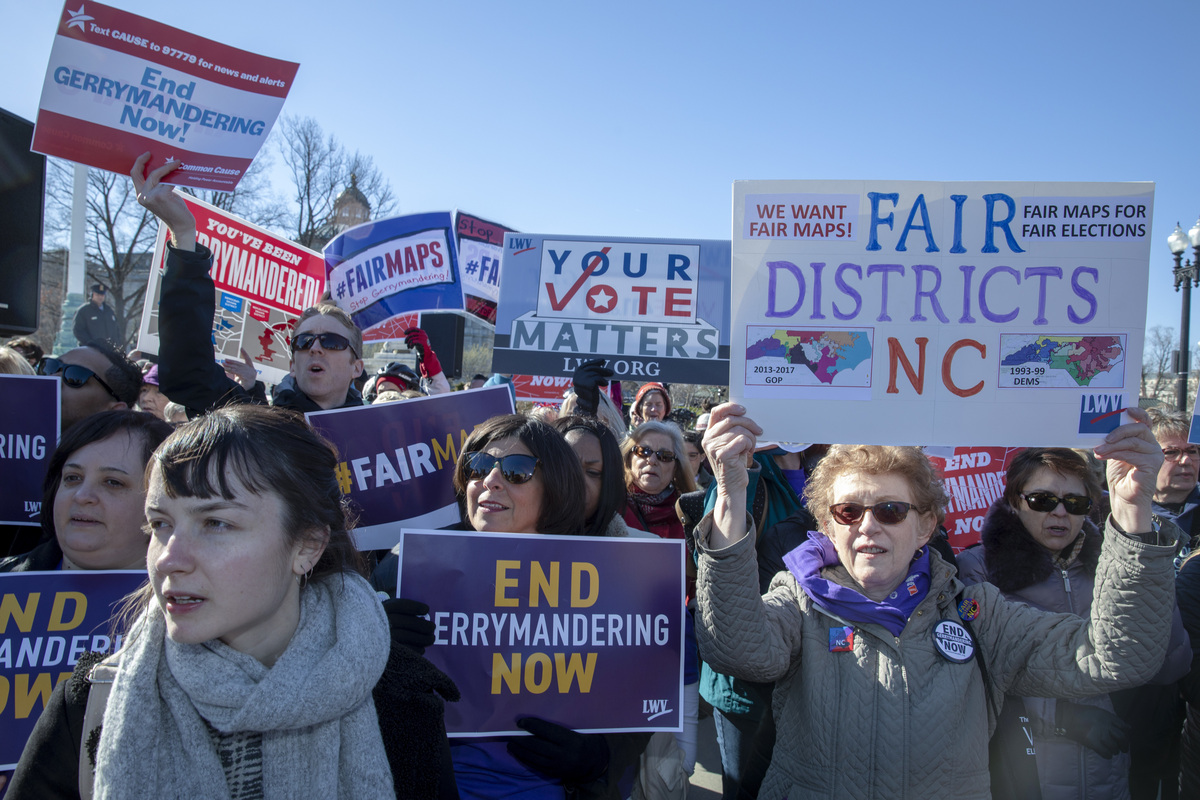 Protesters against gerrymandering at a March 2019 rally coinciding with Supreme Court hearings on major redistricting cases. After the court said the federal judiciary has no role in partisan redistricting cases, legal action is focused on state courts.

Weeks after the U.S. Supreme Court ruled that federal courts can't intervene in cases where state lawmakers have aggressively drawn political boundaries to benefit one political party over another, a new front in the nation's redistricting battles opens Monday in a North Carolina courtroom.

The case has the potential to significantly alter how political maps are drawn in North Carolina and could serve as a blueprint for legal challenges in other states. Or, it could result in the latest affirmation of partisan gerrymandering — a tradition in American politics that stretches back more than two centuries.

"There is a lot at stake both for North Carolina and nationally," said Michael Li, senior counsel at the Brennan Center for Justice who works on redistricting cases and described North Carolina's legislative maps as some of the most lopsided in the country.

During the 2018 midterm election, Republican state legislative candidates received less than half the overall vote. However, in the state Senate they won 58% of the seats (29 out of 50), and in the House they hold 54% of the seats (65 out of 120). As for North Carolina's congressional districts, Democrats won 50% of the vote and 23% of the seats.

If the voting rights groups that have challenged North Carolina's state legislative districts succeed, the maps could be ordered redrawn in time for the 2020 election in a state that is closely divided politically. That would give Democrats a better chance of winning at least one of the legislature's two chambers and put them in a position to have a say in the redistricting process that begins in 2021.

"We have forever had a flawed process that preordains so many of our congressional and legislative elections to the party," asserted Bob Phillips of Common Cause North Carolina, whose group filed the lawsuit. "I believe what's at stake is the beginning of the end of that."

Common Cause's challenge contends the legislative maps were drawn to maximize the power of the GOP and violate the state constitution's clauses guaranteeing the right to a free election, freedom of assembly and equal protection.

"And what we say is that when mapmakers are putting districts together solely primarily based on how people vote, is that's a violation of all three," Phillips said.

He added that this challenge is similar to a partisan redistricting case from Pennsylvania in 2016, when congressional maps were ultimately struck down by the state Supreme Court. Those maps, also drawn by a GOP-controlled legislature, gave Republicans a 12-6 edge in the state's congressional delegation. Under the new maps used in 2018, the delegation was evenly split.

Republicans took back the North Carolina state legislature in 2010 for the first time in more than a century. The first set of legislative maps Republicans enacted in 2011 were struck down for being unconstitutional racial gerrymanders. There have also been multiple challenges to North Carolina's U.S. House districts.

The trial will feature records from an influential Republican redistricting consultant who helped draft many of North Carolina's maps. Thomas Hofeller passed away in 2018, and his estranged daughter received many of his computer files and turned them over to Common Cause. The state court ruled Friday some of those files are admissible as evidence in the trial.

The defendants in this case have consistently said that political data was merely one factor used when establishing these maps.

"The maps are drawn under very strict criteria that were established by the [state] courts years ago," said Republican state Rep. David Lewis, a defendant in this case who has been a central figure in drawing up the new district lines in the legislature.

"I don't believe that the [courts] are anxious to upset those. So I am hopeful that the three-judge panel will do away with this frivolous lawsuit," Lewis said.

State constitutions, Li said, "oftentimes are broader and more robust in protecting rights than the federal Constitution, as a vehicle for policing the reading of maps."

In addition to this litigation in North Carolina, there are pending redistricting challenges in Michigan, Ohio, Georgia, Texas, Louisiana, Connecticut, Mississippi, Alabama and Maryland.

This challenge is specific to the state's legislative districts — 120 House seats, and 50 in the Senate. A trial before three judges is expected to last two weeks. Then, an appeal to the state Supreme Court appears inevitable.

While that bench is made up of six Democrats and one Republican, all parties in the case caution that the outcome is anything but predetermined.