Accessibility links
NPR Review: 'Spin The Dawn,' By Elizabeth Lim Elizabeth Lim's new young adult novel follows a girl who disguises herself as a boy and sets off for the emperor's court in place of her ailing father, who's been summoned as an imperial tailor. 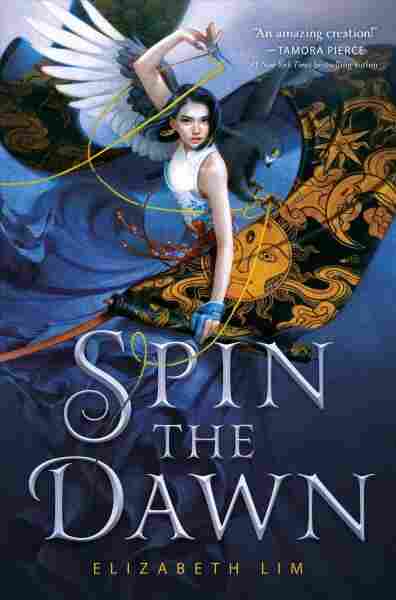 Maia Tamarin is the best tailor along the Great Spice Road. The problem is that girls aren't allowed to be tailors, so she has to hide her work behind the facade of her father's shop. And with her family torn apart by war and her father's illness, she's beginning to wonder if maybe it's time to give up on her talent and marry to save her family and secure her future.

But all of that changes when her father receives a summons to go to the Summer Court to become the imperial tailor. It's a call that can't be refused, so Maia disguises herself as her wounded brother and sets off to save her family with her needle and thread. As a parting gift, her father gives her a pair of scissors that have been in her family for generations — scissors that take her talent to a supernatural new level.

Upon arriving at the Summer Palace, Maia finds that it's not the dazzling emperor for whom she will be sewing but his soon-to-be bride, Lady Sarnai, daughter of the warlord her other two brothers died fighting. On top of that, she is not the only tailor who has been summoned to the Summer Court. She is one of 12 tailors who must all compete to prove that they are the best and only tailor qualified to serve the emperor.

Enter The Quarantine Around 'Wilder Girls' At Your Own Risk

Maia is the least experienced of the bunch, so keeping her place in the competition isn't easy. Some of her competitors will stop at nothing to win, and she realizes that to beat them, she may have to resort to magic. It's a good thing she has her magic scissors, as well as a new and powerful friend: Edan, the court enchanter, who has taken a great interest in the competition and in Maia. She needs his help, especially once she's tasked with gathering the materials to sew three mythical dresses — the laughter of the sun, the tears of the moon and the blood of the stars.

Spin the Dawn, by Elizabeth Lim, reminds me of the kind of books I loved as a teenager, before young adult existed as a genre — books like Terri Windling's Fairy Tales series, Robin McKinley's Deerskin and Garth Nix's Sabriel. It leans into the once-upon-a-time feeling instead of trying to subvert it, and the novel revels in the folkloric essence of Chinese and European fairy tales. Maia is the iconic youngest sibling who must set out into the world to seek her fortune after her elder brothers have fallen, but even as she plays the Everywoman part, the specific details of her craft, her disguise and her determination make her come alive. Fairy tales can be skeletons for writers to craft their stories upon, and Spin the Dawn does this to great effect.

'Spin the Dawn' is proof that casting a wider net not only gives us a fresh story that feels unlike everything else on the shelves beside it but also allows for richer and more nuanced storytelling.

As Spin the Dawn revels in its fairy tale nature, so too it delights in its romance between a girl with terrible secrets and a magical boy who knows and keeps them for her. The love shared between Maia and Edan is as hopeless as it is romantic, and the wistful longing that ensues is pretty much perfect. I sometimes have issues with the trope of a centuries-old magical boy falling in love with a teenage girl (why is it never the other way around? — oh wait, we know why), but these characters are so charming that I really didn't mind it here. If Maia is brave enough to risk execution to have her dream career and save her family, then as far as I'm concerned, she deserves to get some from a hot enchanter if that's what she wants.

So often, fantasy seems to feel the need to focus on the most extreme characters a society has to offer, following the stories of assassins, royals, fighters and thieves. It's less common for a book to focus instead on the lives of craftspeople who build the castles, cook the feasts and sew the epic gowns that are the hallmarks of the genre. Spin the Dawn is proof that casting a wider net not only gives us a fresh story that feels unlike everything else on the shelves beside it but also allows for richer and more nuanced storytelling. It's all the little details that go into crafting the objects people use that bring a society to life, and Maia's perspective as a working tailor makes her world vibrant and full of sensory details that are sure to delight even the most jaded of fantasy readers.