Listen · 3:11 3:11
Airlines Cancel Boeing Max Flights Into November; Holiday Flights Could Be Next 3:11 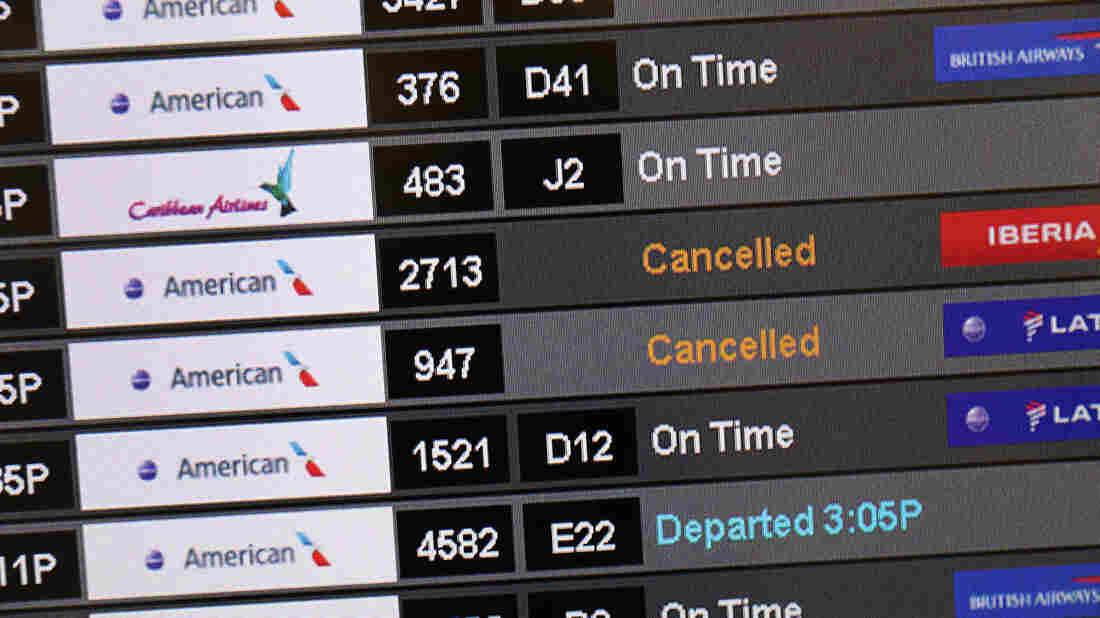 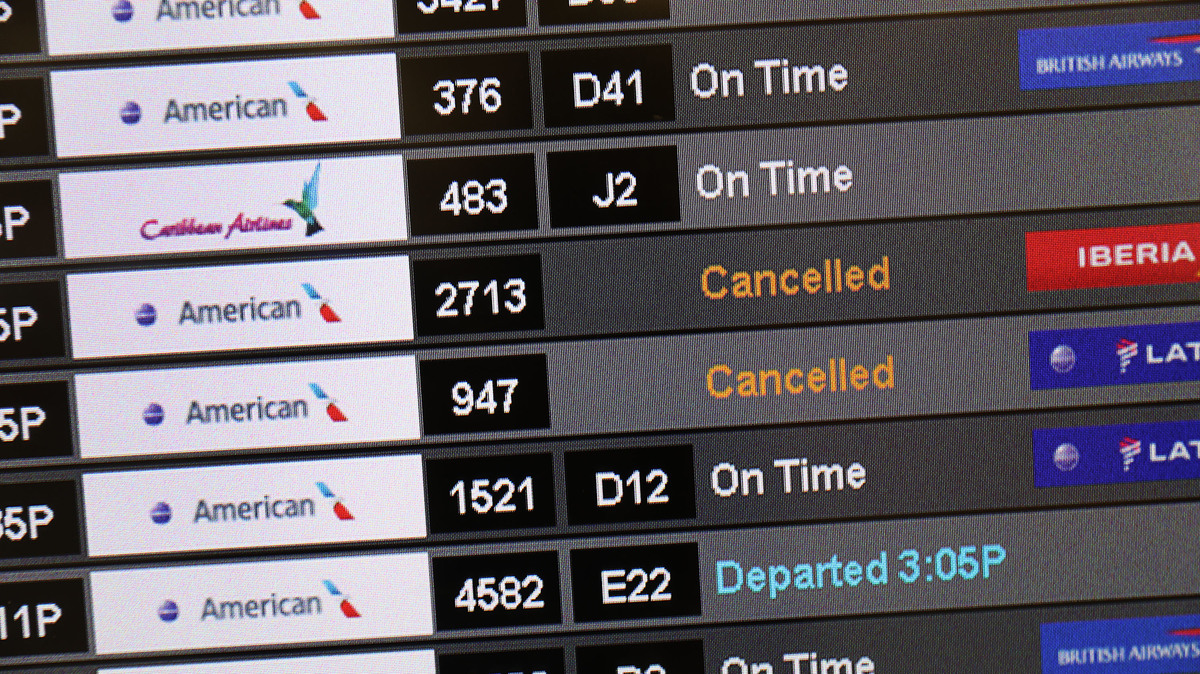 With American Airlines joining United in pulling 737 Max planes from their schedules and cancelling flights into early November, many travel industry observers are bracing for the next shoe to drop: higher priced fares and cancelled flights for the Thanksgiving and Christmas holidays season.

American Airlines announced Monday it is pulling the 737 Max from its schedule through Nov. 2, canceling about 115 flights per day. American reported last week that the Max grounding has already cost the airline $185 million in lost revenue.

United Airlines, the second largest U.S. airline in passenger volume, said Friday it would cancel flights through Nov. 3. That's 2,100 flights in September and another 2,900 flights in October because 14 of its 737 Max jets are grounded.

The Federal Aviation Administration found a new problem in Boeing's Max plane last month, so it will likely be several more months before the company develops a fix and the troubled plane is certified to fly passengers again.

The FAA and its global counterparts ordered all 737 Max planes grounded in March, after an Ethiopian Airlines jet crashed shortly after taking off, killing all 157 people on board. It was the second deadly 737 Max plane crash in less than five months. A Lion Jet 737 Max plunged into the Java Sea off the coast of Indonesia in October under strikingly similar circumstances, killing all 189 people on board that plane.

Boeing says it has completed a software fix for an automated flight control system that investigators link to both crashes, but in running tests of that software upgrade in a simulator, FAA test pilots discovered a new problem. The company says it will take at least until September to complete a fix for the new problem. With a lengthy regulatory review and certification process to follow, global aviation authorities are still months away from allowing Boeing's 737 Max planes to fly passengers again. In the meantime, the planes just sit, parked and unable to fly.

The only other U.S. airlines that has Max planes in their fleets is Southwest, which also likely have to extend cancellations deeper into its fall schedules that it already have. So far Southwest, which has 34 of the planes parked and unable fly, is cancelling about 150 flights a day through Oct. 1 due to the Max grounding.

The longer the Max is grounded, the greater the impact on the airlines and their passengers. All three airlines have many more 737 Max planes on order, which they had planned on integrating into their flight schedules that are planned out months and sometimes years in advance.

American Airlines reported that it expected its losses to grow in the third quarter.

"The grounding of the 737 Max has definitely caused some upset for some travelers," says Hayley Berg, an economist with the fare forecasting and flight booking app, Hopper. She says she hasn't seen a huge effect on national capacity or prices yet, but that could change at the end of the year with the holidays. That means, according to Berg, late fall and winter travel plans may be in jeopardy.

People traveling for Thanksgiving or the December holidays, she says, "may have more difficulty finding flights and if they do find them, they might expect that prices will be higher than usual, given there's less competition on routes where airlines have pulled back capacity."

Start tracking prices now, says Berg. "We recommend that most users book a flight for Thanksgiving or the holidays as early as October to get the best prices."

The airlines are also anxious to get their planes back in the air, says Joseph Schwieterman, a former airline official and now a transportation professor at Chicago's DePaul University.

"It's just too long [for the airlines] to sort of roll with it ... " he adds. "The airlines, I think, are now, in effect, planning for the worst," meaning keeping their Max planes grounded through the end of the year.

"For Boeing, it appears a manageable problem still, but it's becoming a soap opera," Schwieterman says. "And observers wonder if we've found a second problem, with this close scrutiny are we going to find a third problem? Is this going to become something that just drags on? People are rightfully nervous because one deadline after another has been missed."

Delta Air Lines, on the other hand, doesn't fly Boeing's 737 Max. Its CEO told reporters the airline received a "small, marginal benefit" due to the grounding of Boeing's 737 Max planes owned by its rivals.

Meanwhile, a group of consumers filed a lawsuit against Boeing and Southwest Airlines in Texas state court this week, alleging that both companies knew about the dangers of flying the 737 Max planes but they still sold tickets to customers.

Federal authorities have launched a sweeping grand jury investigation into Boeing's development of the aircraft and whether the company ignored or downplayed safety concerns. The FAA is also a focus of that criminal probe as investigators look into whether officials failed to execute their proper regulatory authority when certifying the plane.

According to Bloomberg News, U.S. Attorney General William Barr is recusing himself from that investigation because his former law firm, Kirland and Ellis, is representing Boeing in the matter.

Congress is continuing to investigate the crashes, too, as well as the FAA's process of certifying the now grounded plane. The House Aviation Subcommittee has scheduled another 737 Max hearing for this week, during which, lawmakers will, for the first time, hear from some of the families of those killed in Ethiopian Airlines and Lion Air 737 Max crashes. Others scheduled to testify include a National Transportation Safety Board official, pilots, flight attendants, FAA inspectors and aircraft mechanics and maintenance workers.

And the Boeing Company's executive in charge of the 737 Max program is retiring after less than a year in the post.

Eric Lindblad, 57, is a highly respected engineer and factory operations expert who has been with Boeing for 34 years. He took over the 737 program at the company's Renton, Wash., factory outside of Seattle last August to improve supply chain problems that were slowing production amid a backlog of thousands of orders for the new plane.

But the job quickly shifted to dealing with the fallout of the 737 Max crashes in Indonesia last October and in Ethiopia in March, both of which investigators link to an automated flight control system in the planes that pilots could not override.

But it appears Lindblad is not being forced out because of the Max crisis, but had actually planned to retire from the airplane manufacturer a year ago. In a message to employees, Kevin McAllister, Boeing's top commercial airplanes executive, said Lindblad "shared with me his desire to retire last year," but that he stayed on to take the helm of the 737 program. McAllister praised Lindblad's "strong leadership... as he has navigated some of the most difficult challenges the company has ever faced." He will be replaced by Mark Jenks, who has been leading the development of a new, yet to be named, mid-market plane.