Accessibility links
'Storm Area 51' Event Gains 1 Million Backers, But The Air Force Isn't Amused The top-secret base is not accessible to the public, though it has become a tourist destination. The event began as an Internet joke, but some people apparently are really planning to attend. 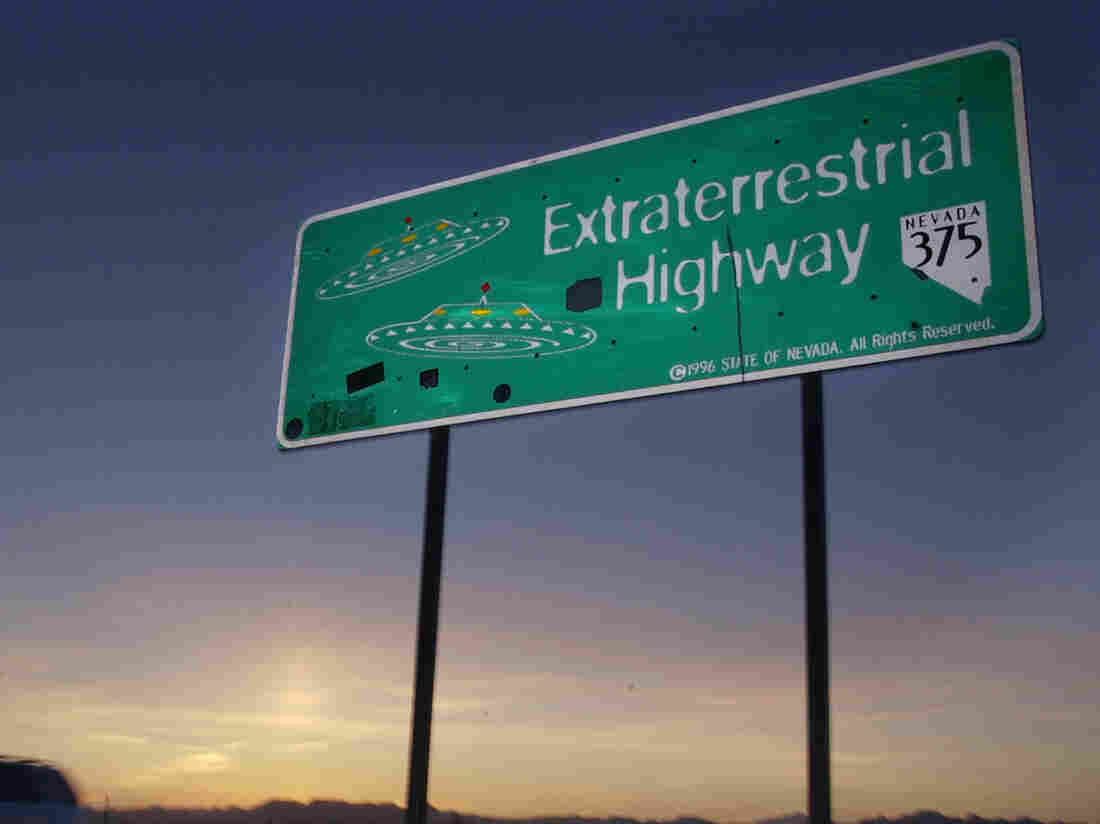 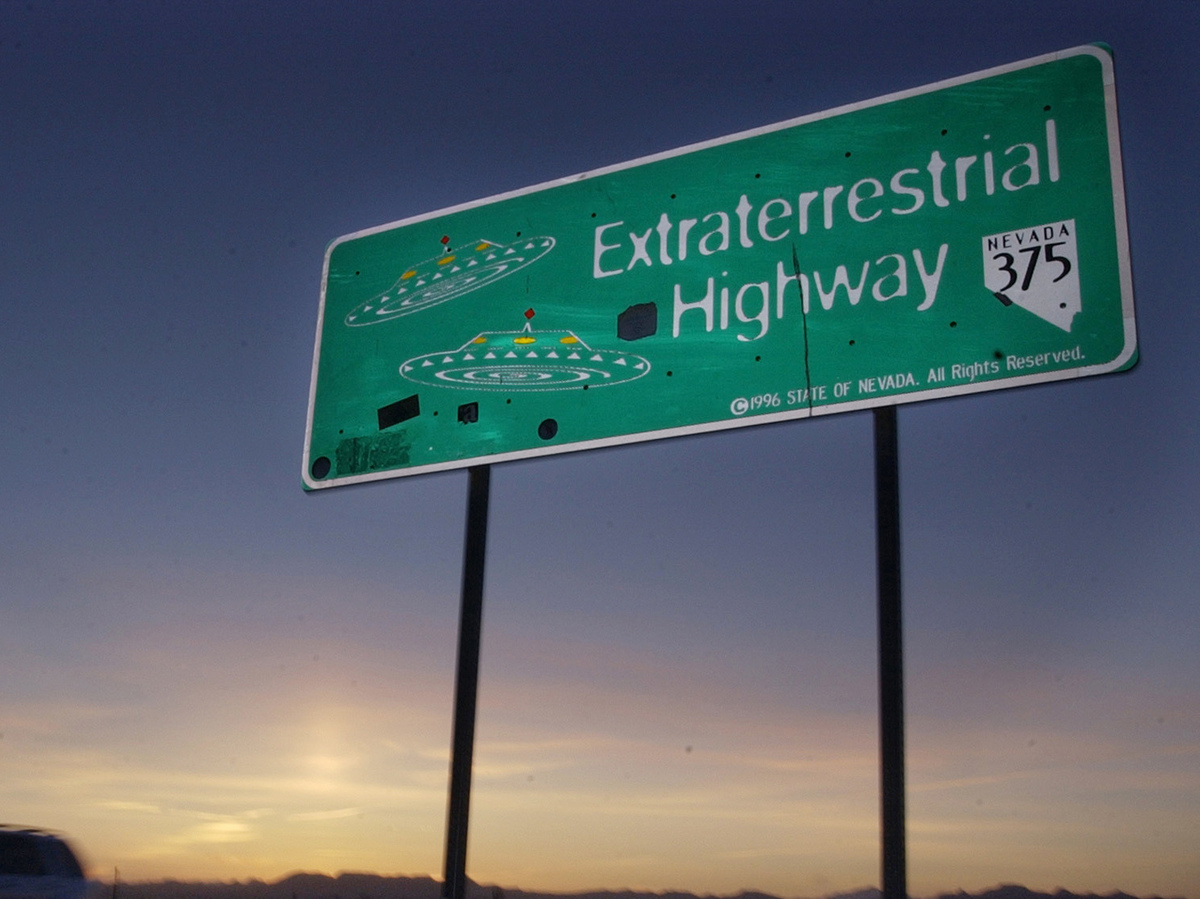 Extraterrestrial Highway near Rachel, Nev., in this 2002 photo.

Imagine throngs of people who have never met each other assembling in mid-September before dawn in a Nevada desert town to rush the entrance of Area 51 in search of aliens.

It is a fantastical idea conceived of as a joke on social media, but its popularity has spread fast. On Monday, the number of people who signed up for the tongue-in-cheek Facebook call to "Storm Area 51" exceeded 1 million.

And now, U.S. military officials say they are monitoring the situation.

"The Nevada Test and Training Range provides flexible, realistic and multidimensional battlespace to test and develop tactics as well as conduct advanced training in support of U.S. national interests," said the official, using the full name of a site that includes Area 51. "Any attempt to illegally access the area is highly discouraged."

According to the event's page, the plan is to "naruto run" toward the facility so the group can "move faster than their bullets," the event says. "Lets see them aliens."

The sprinting style is a reference to Naruto Uzumaki, a Japanese anime character who runs with his chest pointing forward and his arms jutting straight back behind him.

The event has all the makings of a ludicrous Internet joke, right?

"Yes, it sounds like a joke, but there apparently are some people who want to check out the joke," Connie West, the co-owner of Little A'Le'Inn (pronounced "little alien"), told NPR.

West's inn in Alamo, Nev., is the closest lodging site to Area 51. "About 26 miles from the runway," she says.

Since the Facebook event launched, her phone has been ringing incessantly with people looking to book a room. Her 10 rooms are now full for the day of the event, Sept. 20, and she said most of the people who made the reservations asked her about the Area 51 gathering.

West also has about 30 acres of land that she allows campers to book for $15 a night. And so far, about 60 people have committed to pitch a tent on the day of the event, something she has never experienced on a day not associated with an organized event like a marathon or a bike race, competitions that happen in the desert near her inn.

"Apparently, people are taking it seriously," West said. "I think they're stupid if they think they're going to get to the test site, but I'm gonna capitalize on it."

To her, that means selling at the inn's gift shop T-shirts, bumper stickers, coffee cups and keychains, which of course feature a nod to the obvious.

The top-secret base is not accessible to the public, though it has become a tourist destination, with alien-themed outfits like West's not uncommon. Nevada even renamed a state road "Extraterrestrial Highway" because of reports of UFO activity along the road.

Conspiracy theorists have obsessed over Area 51 for decades, claiming the U.S. government is hiding aliens and crashed UFOs at the site. In 2013, the CIA released a classified 1992 report in which the federal government acknowledged that spy planes were tested there. Officials also admitted that Area 51, the place where many sci-fi stories have been based, is a real-life government facility.

It is difficult to say how many of the event's million backers know it is a joke and how many are really considering making a trek to Nevada, but most of the thousands of posts on the page seem to indicate that it is not serious.

"We are forgetting something very crucial," wrote Nick Prafke. "We need vape lords to create a smokescreen to block out satellite and camera images."

The person who created the event page is a 20-year-old man from California who would be identified only as Val. He wouldn't share his last name for fear the publicity around the event would lead to his being harassed.

"I just thought it would be a funny idea for the meme page," Val said via Facebook Messenger. "And it just took off like wildfire. It's entirely satirical though, and most people seem to understand that."

Val told NPR that he'll "more than likely be there, but not for the intended purpose."

He has been talking "with some pretty great people" about planning a different kind of shindig, perhaps something educational, though it was unclear what exactly the lesson would be.

Whatever it is, Val said it is unlikely to include "sprinting through the desert at 3am."