Accessibility links
Global Shipping Is About To Get Greener The shipping industry is starting to move away from pollutant-intensive heavy fuel oil. Scientists and private companies are betting on a clean replacement technology: hydrogen fuel cells. 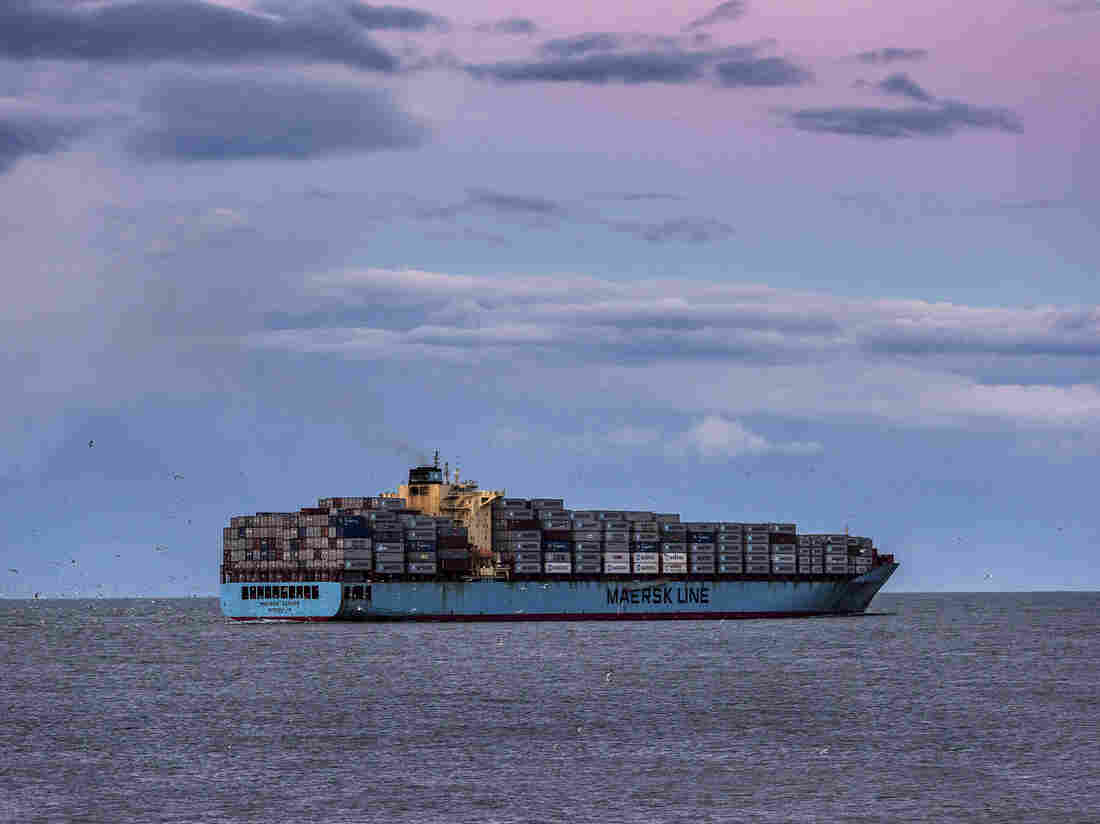 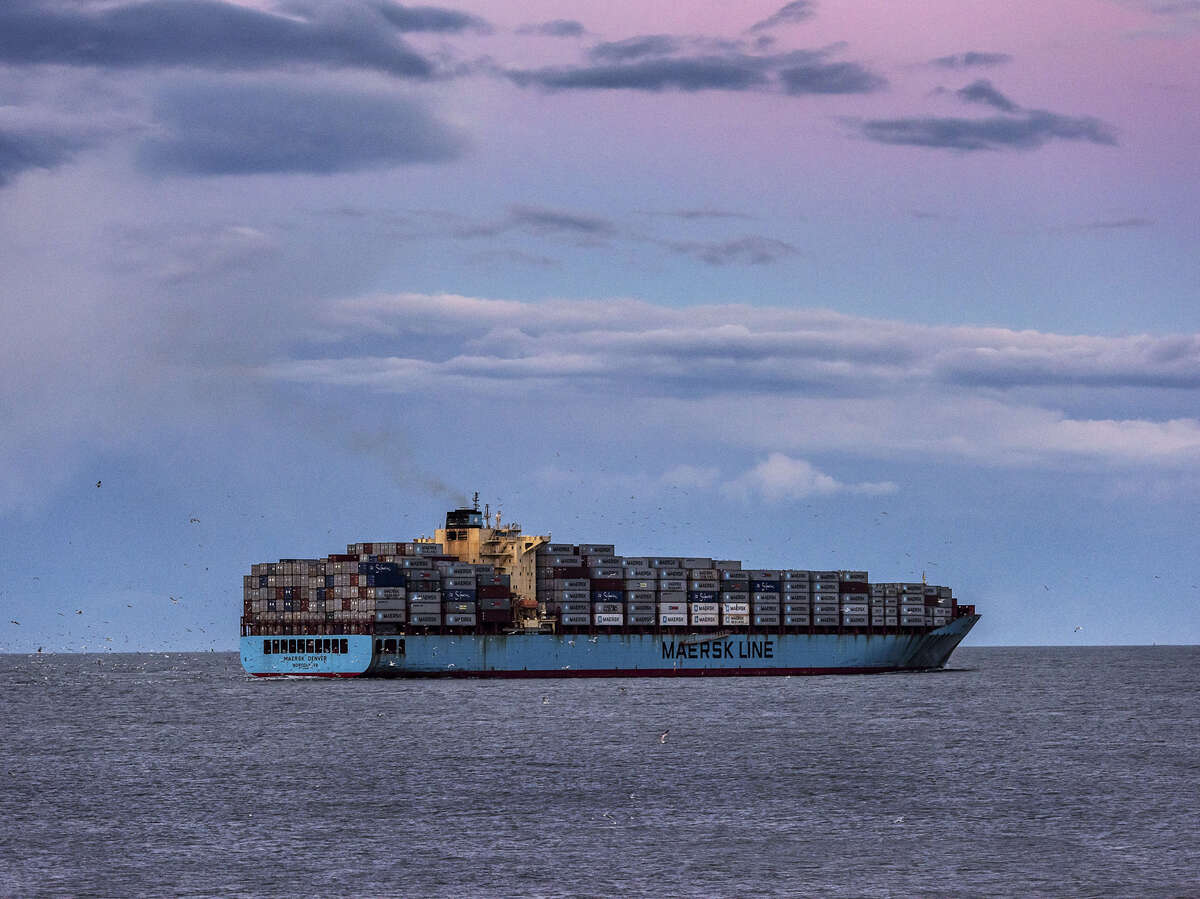 Container ships and other maritime vessels currently run on pollutant-intensive heavy fuel oil. The world's largest container-shipping company, Maersk, has promised to make its operations zero carbon by 2050. Doing so will require using new fuels such as hydrogen.

The global shipping industry is enormous — thousands of ships carry billions of dollars of goods each year across nearly every ocean on the planet.

Those ships run mostly on a particularly dirty type of fuel known as heavy fuel oil, or bunker fuel. It's thick and sooty, and when it burns, it emits sulfur and particulate matter that can cause respiratory illness. It also emits greenhouse gases, including carbon dioxide and methane, which trap heat in the atmosphere and cause global warming.

"If shipping was a country, it would be the sixth-largest polluter in the world," says Nerijus Poskus of the shipping technology company Flexport. "About 3% of global emissions are released by ocean freight shipping."

The industry is growing so steadily, he says, that it's projected to produce more than 15% of global greenhouse gas emissions by midcentury if ships continue to burn the same fuel, which is a real possibility considering that most cargo ships are designed to last at least 30 years. 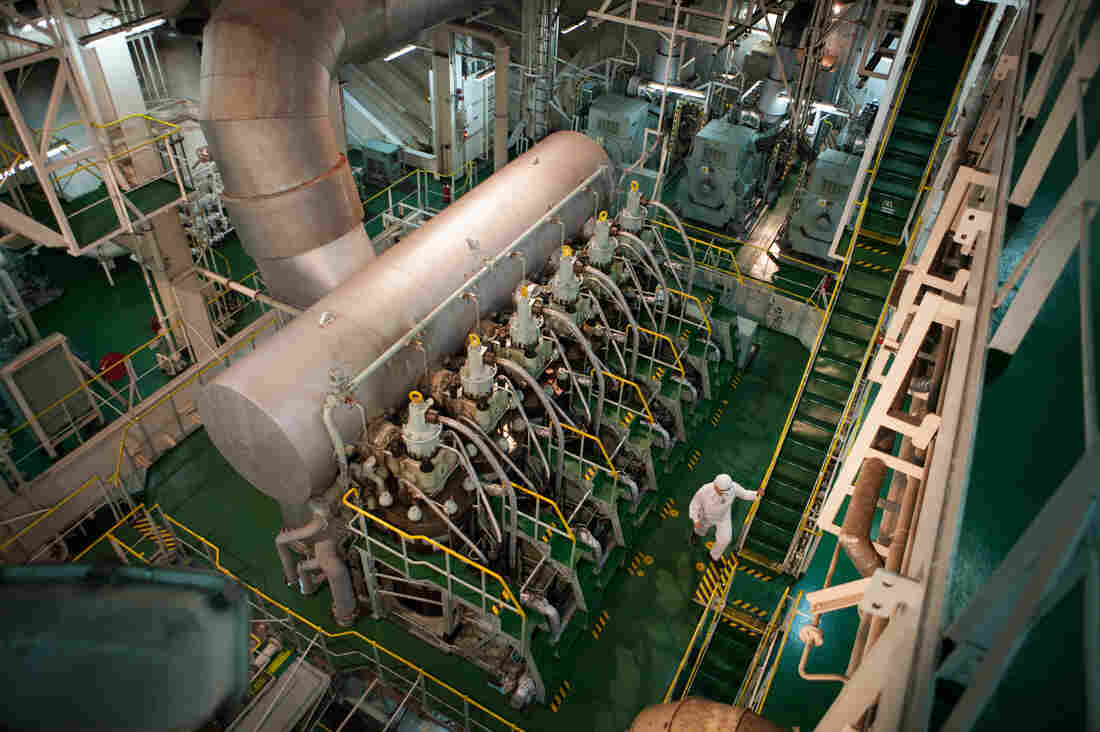 Maritime shipping vessels like this coal-carrying ship are powered by enormous engines that burn thousands of gallons of heavy fuel oil every day when they're at sea. Ryan Kellman/NPR hide caption 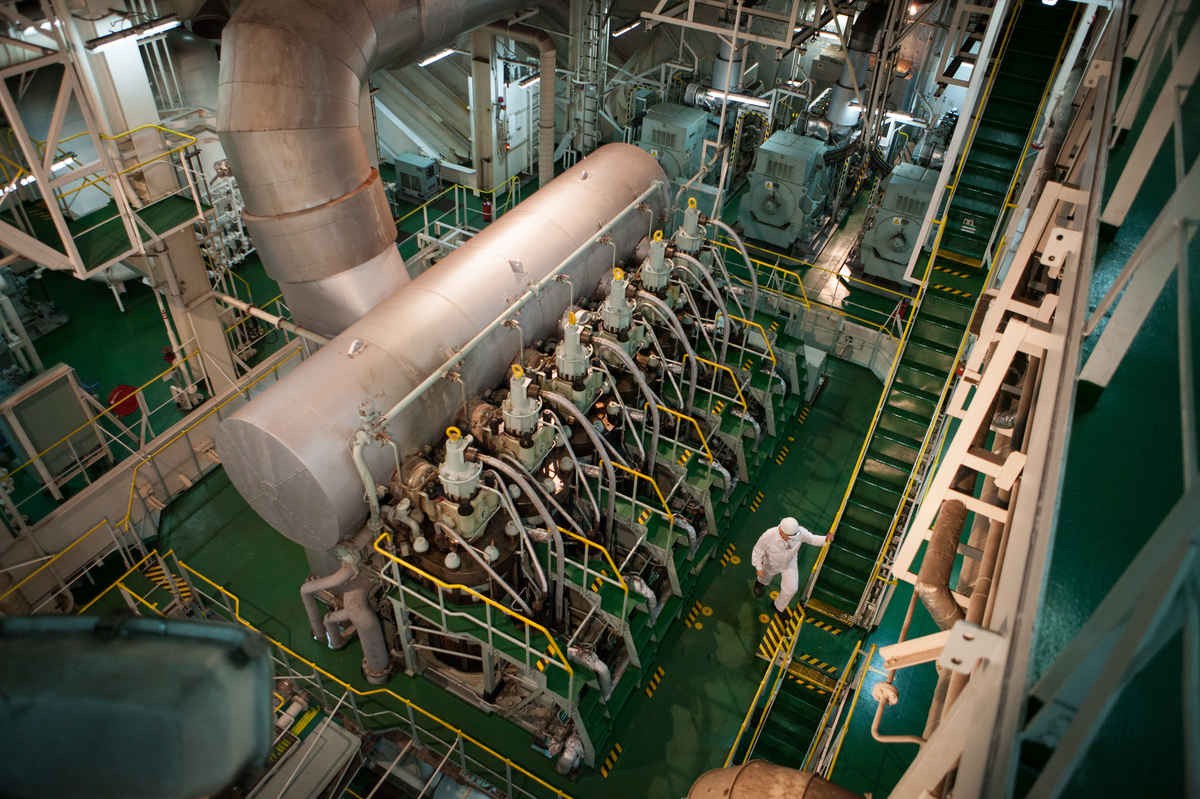 Maritime shipping vessels like this coal-carrying ship are powered by enormous engines that burn thousands of gallons of heavy fuel oil every day when they're at sea.

Yet there are signs that the status quo is changing and that a new fuel could make cargo ships among the cleanest transportation methods on Earth.

The international body that helps create global shipping regulations has clamped down on emissions of some air-polluting substances when ships are in or near ports. The new regulations, which started going into effect in 2012 and which decrease limits dramatically in January 2020, require ships to significantly cut the amount of sulfur pollution they emit when they're near land. For the U.S., the regulations apply anywhere within 200 miles of its coastline.

The easiest way to comply with the new regulations is to burn a different, less pollution-intensive type of diesel fuel. 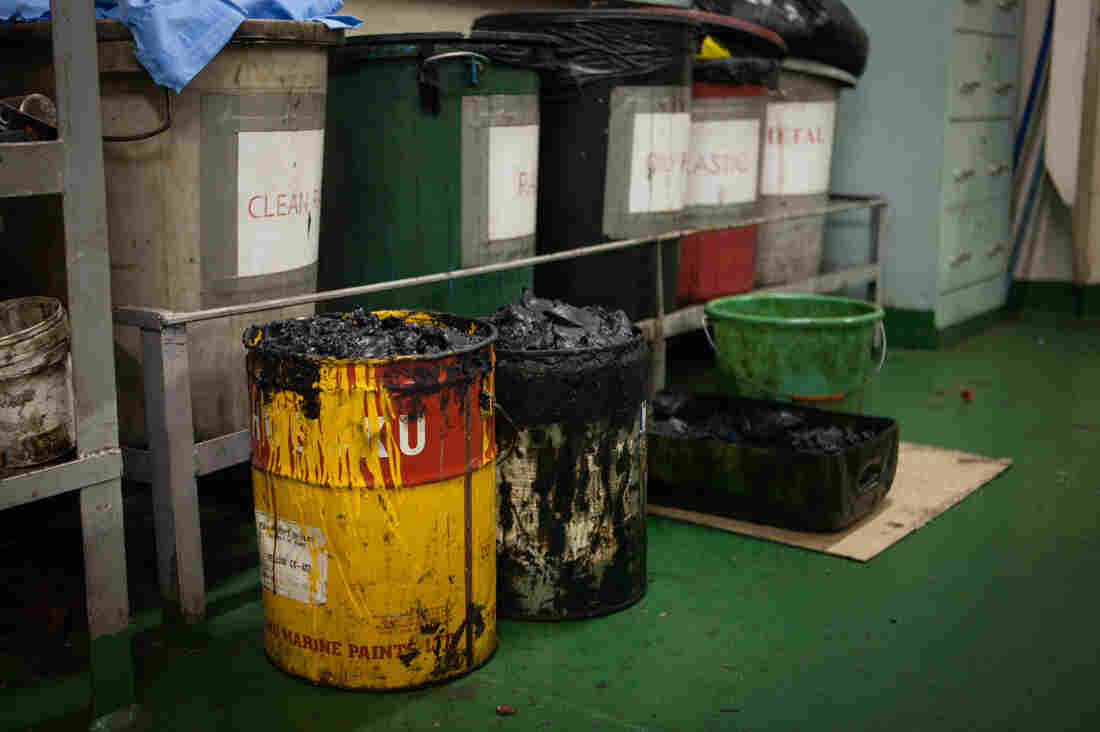 The fuel oil that ships burn produces air pollution, greenhouse gases and waste sludge. The crew of the Premiership, a bulk vessel owned by Seanergy Maritime, collects the sludge in 55-gallon drums on board. Ryan Kellman/NPR hide caption 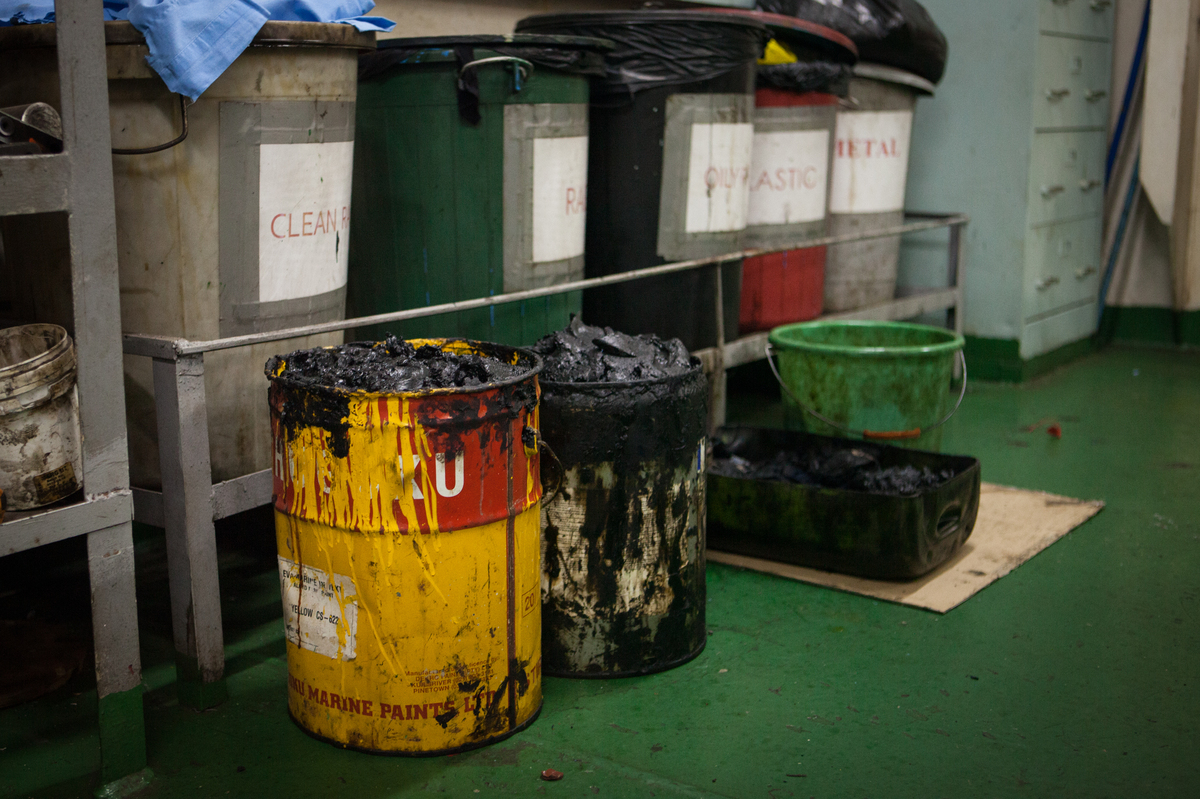 The fuel oil that ships burn produces air pollution, greenhouse gases and waste sludge. The crew of the Premiership, a bulk vessel owned by Seanergy Maritime, collects the sludge in 55-gallon drums on board.

Additional increasingly stringent emissions standards are planned for the next two decades. The largest container-shipping company in the world, Maersk, announced in 2018 that it intends to make its operations carbon free by 2050, though it's still unclear how the company would achieve that goal.

What is clear is that success will require new ships, new engines and — above all else — a new fuel.

Research at the U.S. Energy Department's Sandia National Laboratories suggests that of the two, hydrogen is the most promising.

"There's been a lot of interest in putting hydrogen fuel cells on boats," says Leonard Klebanoff, a researcher at Sandia. Around 2014, he and his then-research partner, Joe Pratt, started systematically analyzing whether current ships could be retrofitted to run using hydrogen fuel cells instead of fossil fuels.

Pratt says the project started when a San Francisco Bay ferry operator asked the Energy Department whether it was possible to switch his fleet over to hydrogen power. Although hydrogen fuel cell technology has existed for decades, at the time no one in the U.S. had ever analyzed whether fuel cells could be used to power the world's shipping fleet.

The answer, they found, was yes.

The main issue was about size. For each unit of energy, liquid hydrogen is about four times larger by volume than conventional diesel, so many engineers worried that it might not be possible to fit enough fuel onto ships. Liquefied natural gas has a similar size problem and doesn't come with the zero-carbon benefits of hydrogen.

But "the efficiency of a fuel cell is about twice as much as a diesel engine," Klebanoff says, "[so] you end up needing only about twice as much volume for the same endurance." And the gigantic internal combustion engines that currently take up lots of space on ships would be unnecessary on a vessel powered by hydrogen.

When they analyzed the entire system, Klebanoff and Pratt found that it would be possible to retrofit most types of existing vessels to run on hydrogen and even easier to construct a new ship powered by fuel cells.

"The technology is all here," Pratt says. "There's no reason why we couldn't make all these vessels zero emission today."

In 2018, Pratt left Sandia to prove it. He co-founded a company called Golden Gate Zero Emission Marine, drew up detailed construction plans for a hydrogen-powered ferry and persuaded the state of California to contribute $3 million to fund a pilot project. 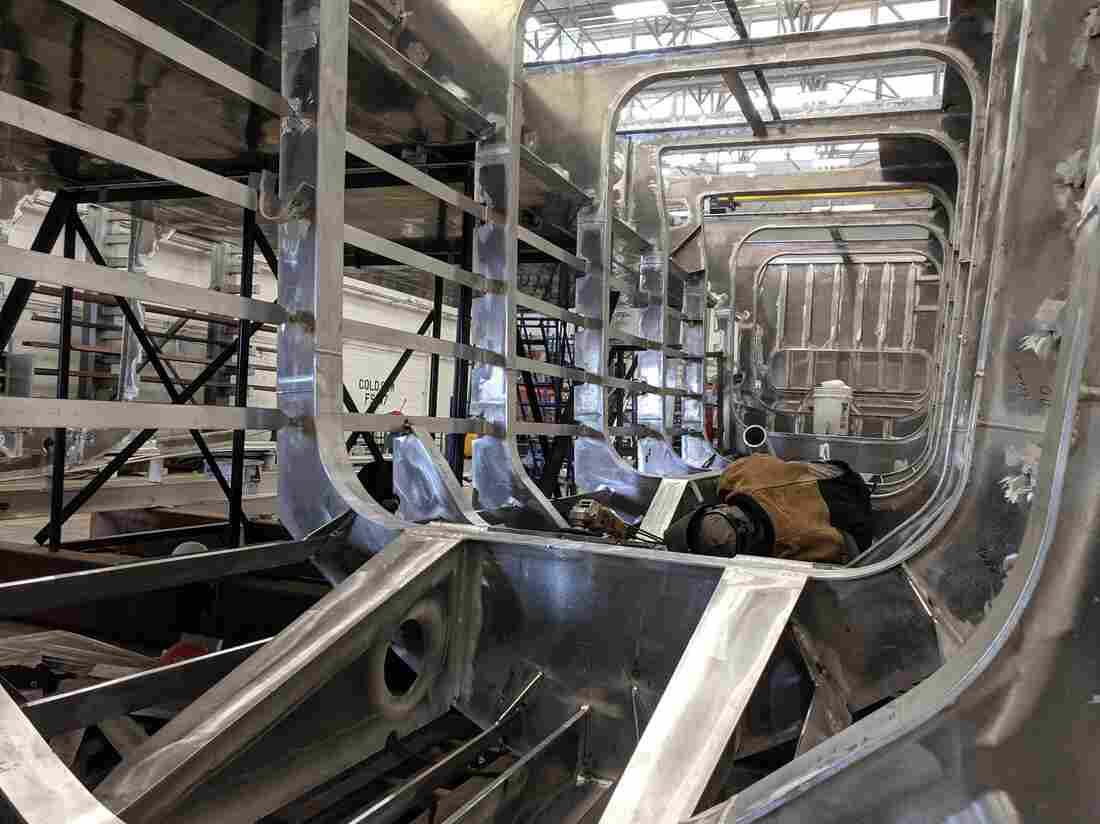 The first hydrogen-fueled ferry in the U.S. is under construction in Oakland, Calif. Two hulls will support hydrogen tanks and fuel cells capable of powering the vessel without fossil fuels. Rebecca Hersher/NPR hide caption 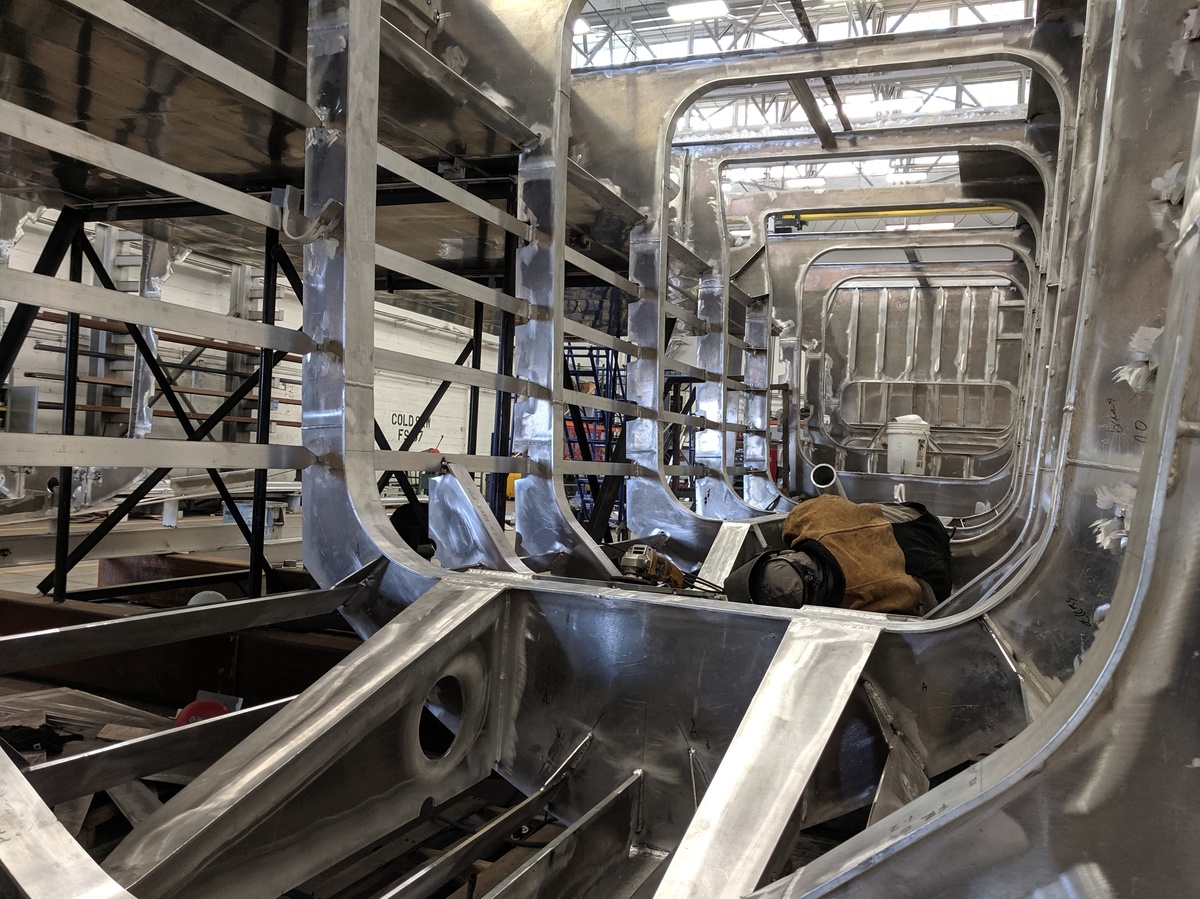 The first hydrogen-fueled ferry in the U.S. is under construction in Oakland, Calif. Two hulls will support hydrogen tanks and fuel cells capable of powering the vessel without fossil fuels.

In May, inside a warehouse at a shipyard in Oakland, Calif., welders worked meticulously on the aluminum skeleton of a catamaran. The ship's hydrogen fuel tanks will sit on the deck and will power a propeller below.

The ship's exhaust will be moist air, devoid of sulfur, soot and greenhouse gases. In fact, the drinking fountains on the ferry will feature water recycled from the exhaust system.

When the ship — it's a passenger ferry — is finished this fall, it will be the first hydrogen-powered vessel to operate in the United States. It will be used to carry passengers across the San Francisco Bay and for tours of the area, and a Sandia National Laboratories team will study the vessel's performance.

But Pratt sees signs that a commercial market for such vessels exists. He says that since his company formed, it has been contacted almost continuously by ship operators wanting to know more about hydrogen vessels. "It's not just a few lab scientists thinking about it," he says. "There are people out there who want it."

Even so, Poskus says, it will be another decade before the shipping industry could begin to adopt hydrogen fuel cells. And, until there is more demand for fuel cell technology, hydrogen fuel will remain significantly more expensive than other, more polluting, shipping fuels.

"Technology is being tested. It's promising. I do think once it proves that it actually works, by 2025-plus, people will start ordering [new ships]," he says. "It takes three to five years to build a ship, so maybe by 2030 we will start seeing hydrogen ships."