Accessibility links
Apollo 11: 2 Engineers Reflect On Building The Apollo Command Module It was the only part of the Apollo 11 spacecraft that came back from the moon. Designing, testing and building it was a monumental task, according to two engineers who were part of the effort. 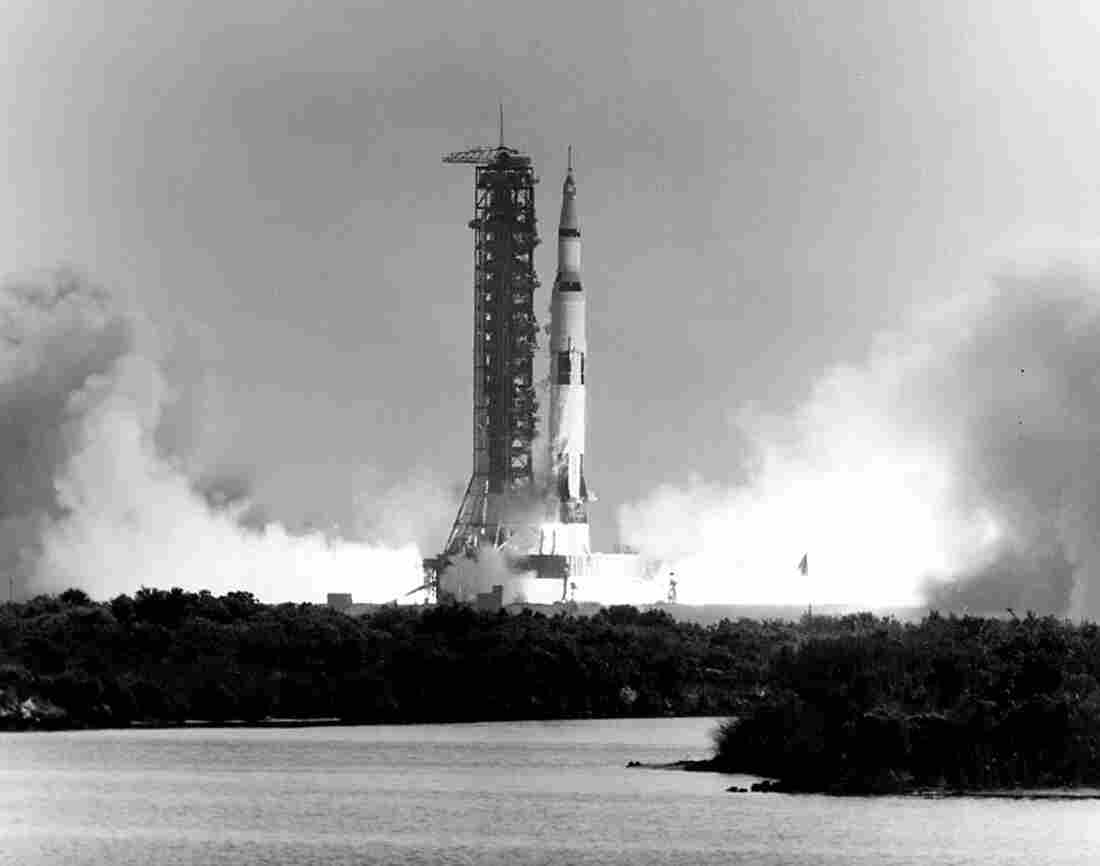 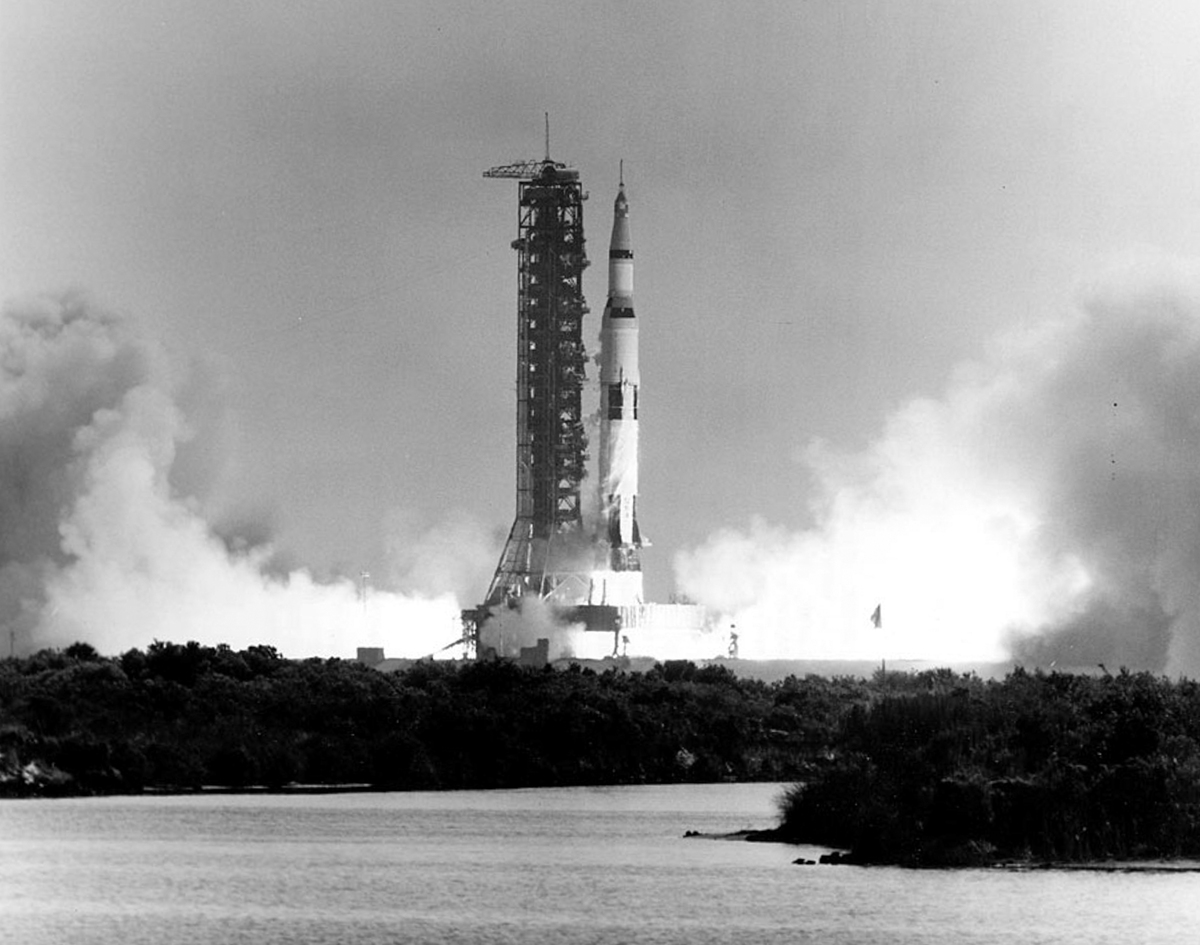 The Apollo 11 Saturn V lifts off with astronauts Neil Armstrong, Michael Collins and Edwin "Buzz" Aldrin Jr. on July 16, 1969, from the Kennedy Space Center's Launch Complex 39A in Florida.

Look at a picture of the Apollo 11 launch and you'll probably notice the rocket's pointed tip and the fire coming from the five giant engines in the first stage of the 36-story-tall Saturn V rocket.

What you might miss is arguably the most important part of the entire thing: the command module.

It's the tiny, gumdrop-shaped vehicle sitting just below the tip. It holds the astronauts, their clothing, sleeping bags, food and — along with a companion service module — all of the systems needed for a round-trip journey to the moon. It's also the only piece of the spacecraft to complete the entire trip and splash down back on Earth.

(Left) The Apollo 11 command and service modules are mated to the Saturn V lunar module adapter. (Right) The Apollo 11 spacecraft command module is loaded aboard a Super Guppy aircraft at Ellington Air Force Base for shipment to North American Rockwell Corp.

"It was the boat that basically got people there," said Bill Barry, NASA's chief historian. "A mission to the moon wouldn't have happened without a command module."

The command module was born at North American Aviation in Downey, Calif., after the company was awarded the contract in November 1961.

What used to be farmland just south of Los Angeles was transformed over the 1950s and '60s, into one of the premier places for aerospace testing and design, with a major period of expansion owed to the Apollo program.

President John F. Kennedy's 1961 challenge to put an American on the moon by the end of the decade meant North American was under a severe time crunch. So, it began hiring engineers and technicians. Lots of them. From all over the country. 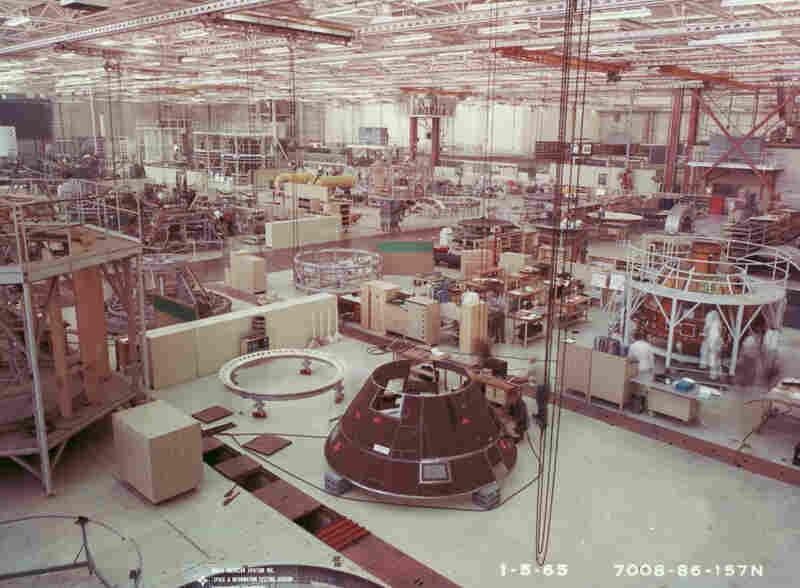 "When I first arrived in California and reported for work, there was a lot of chaos," said Chuck Lowry, an expert in parachutes, which were vital for slowing the command module's descent as it returned to Earth.

He moved his pregnant wife and two young kids away from a good home with family and friends in Ohio, straight into a motel in Downey, where they lived for the first three weeks so that he could get started working right away. 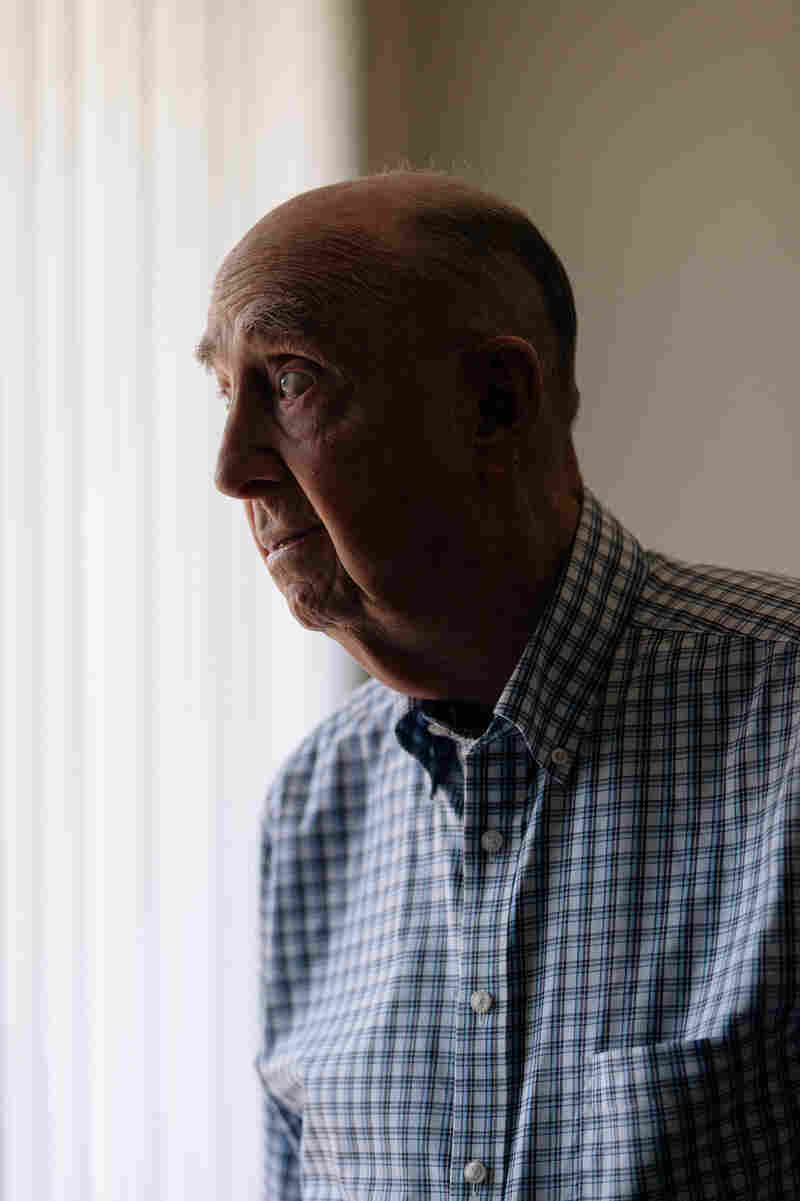 Chuck Lowry, shown at home last month in Santa Ana, Calif., says hiring ramped up so quickly that they ran out of equipment: "I know people that took doors off of the offices and put them on sawhorses and that became their drafting table." Michael Hernandez for NPR hide caption

"Many people came in and there was just no room for them," Lowry said. The hiring ramped up so quickly that the contractor ran out of drafting tables. "I know people that took doors off of the offices and put them on sawhorses and that became their drafting table," he said.

After a while, things began to settle and a system established itself, which meant that the folks on the ground in Downey were working out the details and beginning tests of the conical module. 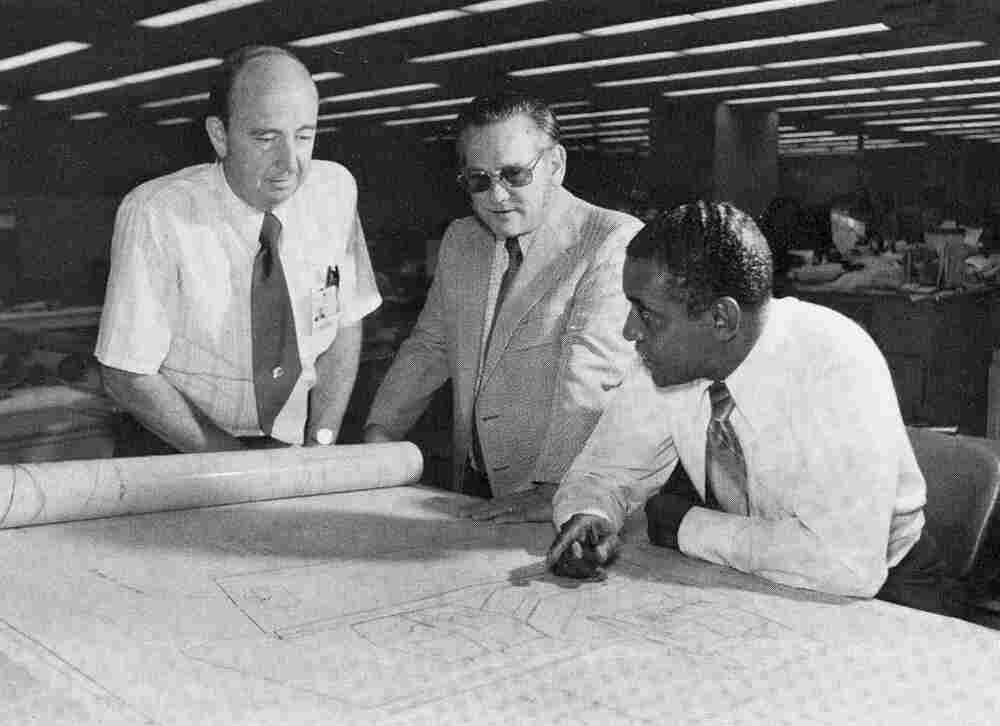 That included crawling in and out of the roughly Volkswagen Beetle-sized capsule, sometimes with five other people doing their jobs in there at the same time. Gerald Blackburn remembers how tight it was. He was only 19 when he started on the project as a lab technician, testing and inspecting hardware.

If a bolt needed to be moved half an inch, Blackburn said, there'd be endless meetings about it and production could be delayed.

"You got to the point where you began to realize that this thing was so complex. It was so big that there was no way you could fathom the whole program," he said. "So you had to rely on everybody who was doing their job and taking care of what they needed to take care of." 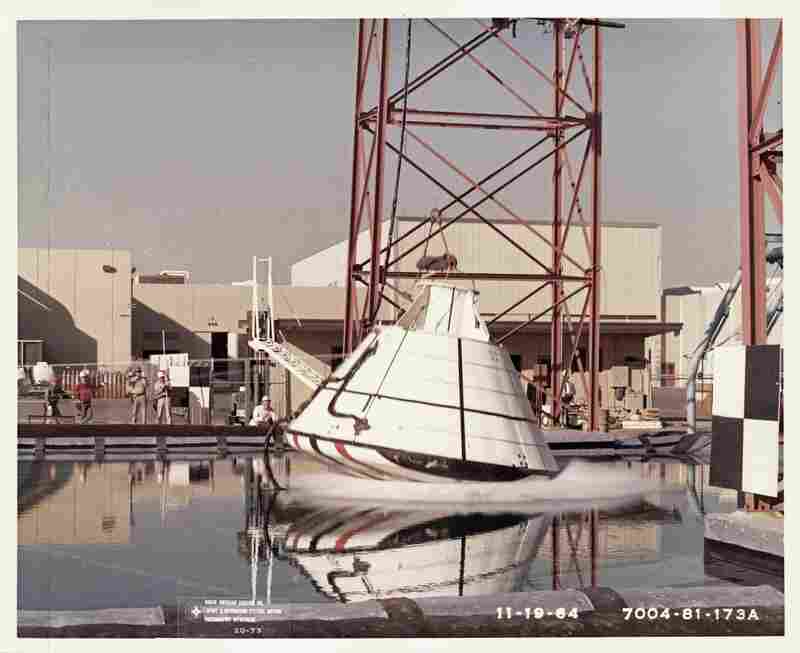 "You learn very quickly that there was a lot we didn't know about building spacecraft," he added.

For Lowry and Blackburn, Apollo was their lives. Working nonstop, 10-15 hours a day at times and rarely seeing their families.

Still, both men speak of the time fondly, reminiscing about what it was like to be driven by the purpose of one common goal and how, in the beginning, those feelings were amplified by a sort of naive optimism. 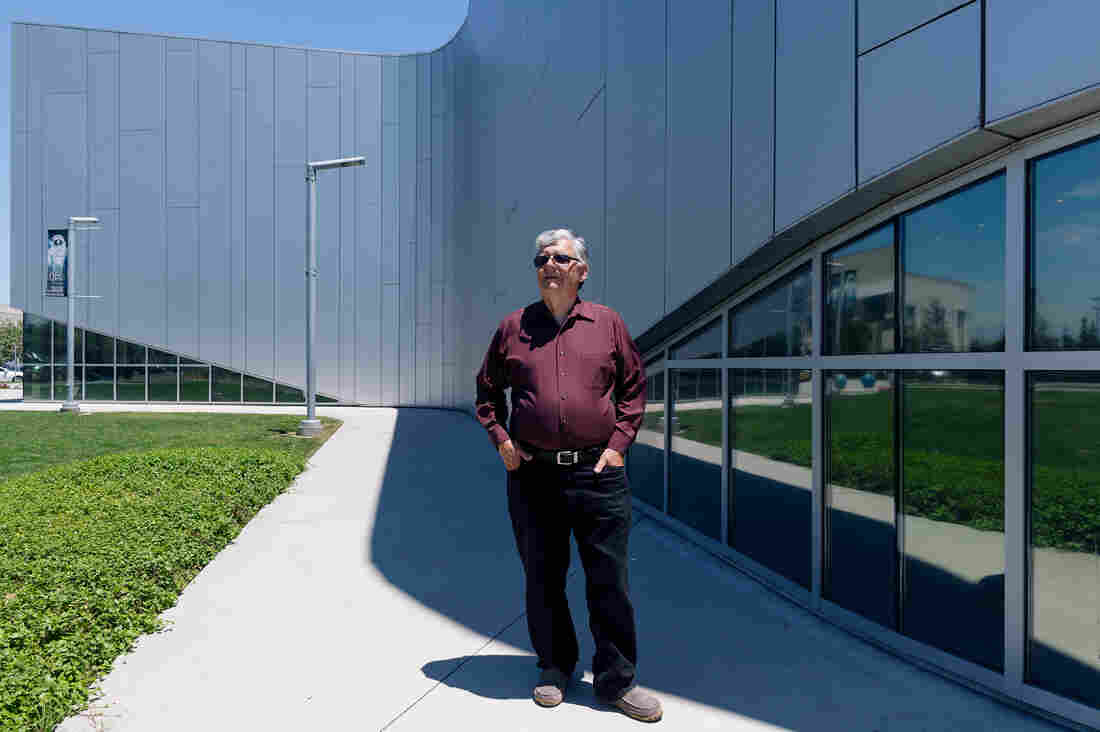 The day everything changed

It's not that people didn't think something could go wrong, it's just that before Jan. 27, 1967, nothing major had. Certainly, nothing on such a catastrophic scale.

During a routine launch rehearsal test of what was scheduled to be the first manned Apollo mission, a spark set off an all-consuming fire in the pure oxygen environment of the module. The hatch couldn't be opened quickly enough and the cockpit, full of flammable materials, was quickly engulfed. The three astronauts inside were killed. 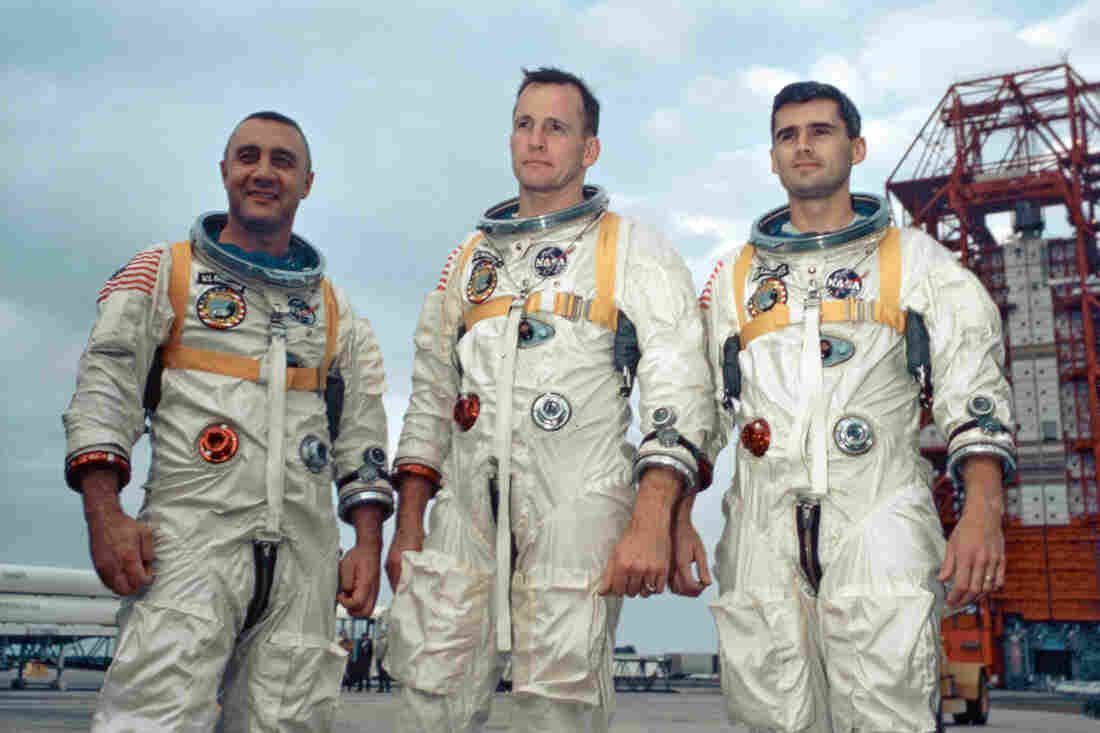 Back in Downey, production came to a halt while the fire was investigated, which took months.

"Everybody that was working here, without knowing what the results of the investigation are, are asking themselves the same question, 'Did I do something wrong?'" said Blackburn. "The whole tone had changed."

"Our feeling about the lunar mission took on a whole new dimension of increased safety," said Lowry. "I think in the beginning, before the fire, before 1967, we were very pressed by schedule. We did everything to meet schedules. And when you do that, you're apt to miss details that could be very important. You don't know it at the time."

Lowry said safety boards were set up, inviting additional scrutiny of Apollo designs from outside experts. They made sure they could trace every little piece of the module, who manufactured it and what it was made of, down to the nuts and bolts.

The module design was overhauled, including the addition of a quick-open door to allow the astronauts to exit the capsule in case of emergency.

But it wasn't long until the ruthless pace of the program picked back up.

"As John F. Kennedy said, 'we're going to land and return men safely in the 1960s.' In that decade. And we held that goal very sacred. And it was important, because you've got Congress, you've got people, the world watching. We just have to meet our goal on that," said Blackburn.

And they were both good.

Apollo 7, the first crewed mission, made its way to space. The command module performed so well that NASA felt confident in making a bold move — sending Apollo 8 all the way around the moon in December.

Apollo 9 was an Earth-orbit test of the lunar module. Apollo 10 was a "dress rehearsal" for the first landing, with astronauts descending to less than 50,000 feet above the lunar surface before returning home.

And then, the historic mission.

While Buzz Aldrin and Neil Armstrong visited the moon's surface, Michael Collins flew the command and service module around the moon before meeting back up with them and heading home.

Lowry listened in from Downey to the radio chatter between Mission Control and the Apollo 11 crew in space.

"[You would] always listen like, 'is there anything in the conversation going on that might indicate something is wrong?'" he said. "[It's] kind of intense. ... you're just wanting them to get back home safely."

On their way back, the astronauts sent one final transmission from space.

Collins had this to say: "This operation is somewhat like the periscope of a submarine. All you see is the three of us, but beneath the surface are thousands and thousands of others. And to all of them, I'd like to say thank you very much."

Upon reentry, Lowry's parachutes deployed and inflated, and all of Blackburn's quality testing paid off. The capsule splashed down in the North Pacific and the astronauts made it back safely.

More than 400,000 people worked on the Apollo program.

"John F. Kennedy had said, 'We're going to the moon not because it's easy, but because it's hard.' And he was right on that," said Lowry. "It took a lot of years. We worked a lot of weekends, a lot of holidays. ...Our families suffered. There were a lot of heart attacks and broken homes and strokes. Apollo took a toll."

Lowry basically didn't see his family for a decade. Blackburn, who rose to the ranks of management at North American, lost an eye in an accident when a pressure gauge exploded during a test of command module components.

Still, he said, "I've referred to what I call this place and that time as our cosmic Camelot. ...When people and a country came together with commitment. A commitment to do something and achieve a goal that was incredible."