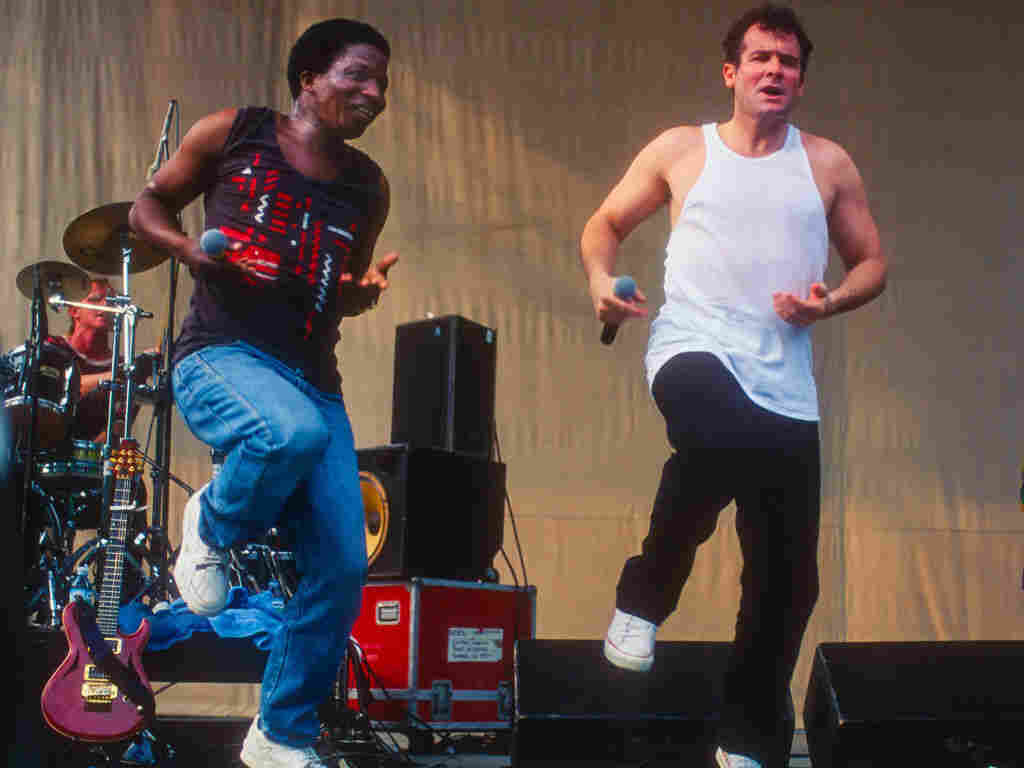 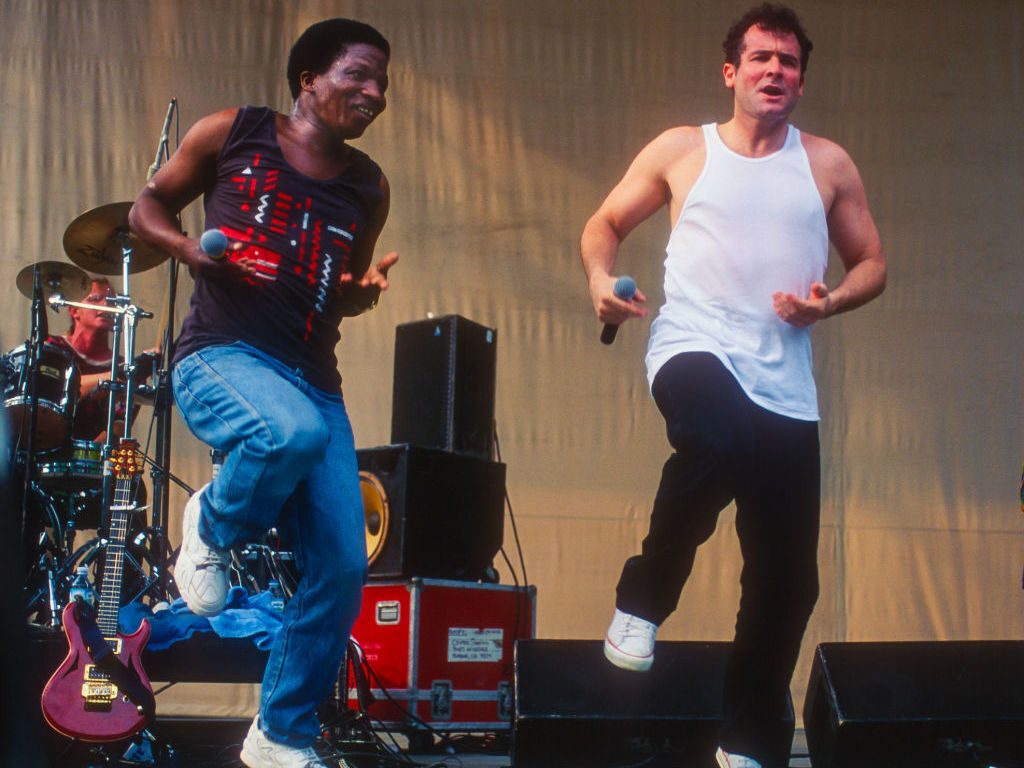 One of the most celebrated voices in modern South African music has died. Singer, dancer and activist Johnny Clegg, who co-founded two groundbreaking, racially mixed bands during the apartheid era, died Tuesday in Johannesburg at age 66. He had battled pancreatic cancer since 2015.

His death was announced by his manager and family spokesperson, Roddy Quin.

Johnny Clegg was born in England, but he became one of South Africa's most creative and outspoken cultural figures. He moved around a lot, as a white child born to an English man and a female jazz singer from Zimbabwe (then known as Southern Rhodesia). His parents split up while he was still a baby; Clegg's mother took him to Zimbabwe before she married again, this time to a South African crime reporter, when he was 7. The family moved north to Zambia for a couple of years, and then settled in Johannesburg.

He discovered South Africa's music when he was a young teenager in Johannesburg. He had been studying classical guitar, but chafed under its strictness and formality. When he started hearing Zulu-style guitar, he was enchanted — and liberated.

"I stumbled on Zulu street guitar music being performed by Zulu migrant workers, traditional tribesmen from the rural areas," he told NPR in a 2017 interview. "They had taken a Western instrument that had been developed over six, seven hundred years, and reconceptualized the tuning. They changed the strings around, they developed new styles of picking, they only use the first five frets of the guitar — they developed a totally unique genre of guitar music, indigenous to South Africa. I found it quite emancipating."

He soon found a local, black teacher — who took him into neighborhoods where whites weren't supposed to go. He went to the migrant workers' hostels: difficult, dangerous places where a thousand or two young men at a time struggled to survive. But on the weekends, they kicked back, entertaining each other with Zulu songs and dances.

Because Clegg was so young, he was accepted in their communities, and in those neighborhoods, he discovered his other great passion: Zulu dance, which he described as a kind of "warrior theater" with its martial-style movements of high kicks, ground stamps and pretend blows.

"The body was coded and wired — hard-wired — to carry messages about masculinity which were pretty powerful for a young, 16-year-old adolescent boy," he observed. "They knew something about being a man, which they could communicate physically in the way that they danced and carried themselves. And I wanted to be able to do the same thing. I fell in love with it. Basically, I wanted to become a Zulu warrior. And in a very deep sense, it offered me an African identity."

And even though he was white, he was welcomed into their ranks, despite the dangers to both him and his mentors. He was arrested multiple times for breaking the segregation laws.

"I got into trouble with the authorities, I was arrested for trespassing and for breaking the Group Areas Act," he told NPR. "The police said, 'You're too young to charge. We're taking you back to your parents.'"

He persuaded his mother to let him go back. And it was through his dance team that he met one of his longest musical collaborators: Sipho Mchunu. As a duo, they played traditional maskanda guitar music for about six or seven years.

Over time, they started thinking bigger; Clegg wanted to try to meld Zulu music with rock and with Celtic folk.

"I was exposed to Celtic folk music early on," he told NPR. "I never knew my dad, and music was one way which I can connect with that country. I liked Irish, Scottish and English folk music. I had a lot of tapes and recordings of them. And my stepfather was a great fan of pipe music. On Sundays, he would play an LP of the Edinburgh Police Pipe Band."

Clegg was sure that he heard connections between the rural music of South Africa's Natal province (now known as KwaZulu-Natal) — the music that he was learning from his black friends and teachers — and the sounds of Britain. So Clegg and Mchunu founded a fusion band called Juluka — "Sweat" in Zulu.

At the time, Johnny was a professor of anthropology at the University of the Witwatersrand in Johannesburg; Sipho was working as a gardener. They dreamed of getting a record deal even though they knew they couldn't get airplay, or perform publicly in South Africa.

It was a hard sell to labels. South African radio was strictly segregated, and record companies refused to believe that an album sung partly in Zulu and partly in English would find an audience in any case. Clegg told NPR that their songs' primary subject material wasn't setting off any sparks with record producers, either.

"You know, 'Who really cares about cattle? You're singing about cattle. You know we're in Johannesburg, dude, get your subject matter right!' Clegg recalled. "But I was shaped by cattle culture, because all the songs I learned were about cattle, and I was interested. I was saying, 'There's a hidden world. And I'd like to put it on the table.'"

They got a record deal with producer Hilton Rosenthal, who released Juluka's debut album, Universal Men, on his own label, Rhythm Safari, in 1979. And the band managed to find an audience both at home and abroad. One of its songs, "Scatterlings of Africa," became a chart hit in the U.K.

The band toured internationally for several years, and went. But eventually, Mchunu decided he'd had enough. He wanted to go home — not just to Johannesburg, but home to his native region of Zululand, in the KwaZulu-Natal province, to raise cattle.

"It was really hard for Sipho," Clegg told NPR. "He was a traditional tribesman. To be in New York City, he couldn't speak English that well — there were times when I think he felt he was on Mars. And after some grueling tours, he said to me, 'I gave myself 15 years to make it or break it in Joburg, and then go home.' So he resigned, and Juluka came to an end —and I was still full of the fire of music and dance."

So Clegg founded a new group called Savuka — which means "We Have Risen" in Zulu. Savuka had ardent love songs, like the swooning "Dela," but many of the band's tunes, like "One (Hu)Man, One Vote" and "Warsaw 1943 (I Never Betrayed the Revolution)," were explicitly political.

"Savuka was launched basically in the state of emergency in South Africa, in 1986," Clegg observed. "You could not ignore what was going on. The entire Savuka project was based in the South African experience and the fight for a better quality of life and freedom for all."

Long after Nelson Mandela was freed from prison and had become president of South Africa, he danced onstage with Savuka to that song that Clegg had written for him.

Clegg went on to a solo career. But in 2017, he announced he'd been fighting cancer. And he made one last international tour that he called his "Final Journey."

Clegg never shied away from being described as a crossover artist. Instead, he embraced the concept.

"I love it," he said. "I love the hybridization of culture, language, music, dance, choreography. If we look at the history of art, generally speaking, it is through the interaction of different communities, cultures, worldviews, ideas and concepts that invigorates styles and genres and gives them life and gives people a different angle on stuff that was really, just, you know, being passed down blindly from generation to generation."

Johnny Clegg didn't do anything blindly. Instead, he held a mirror up to his nation — and urged South Africa to redefine itself.