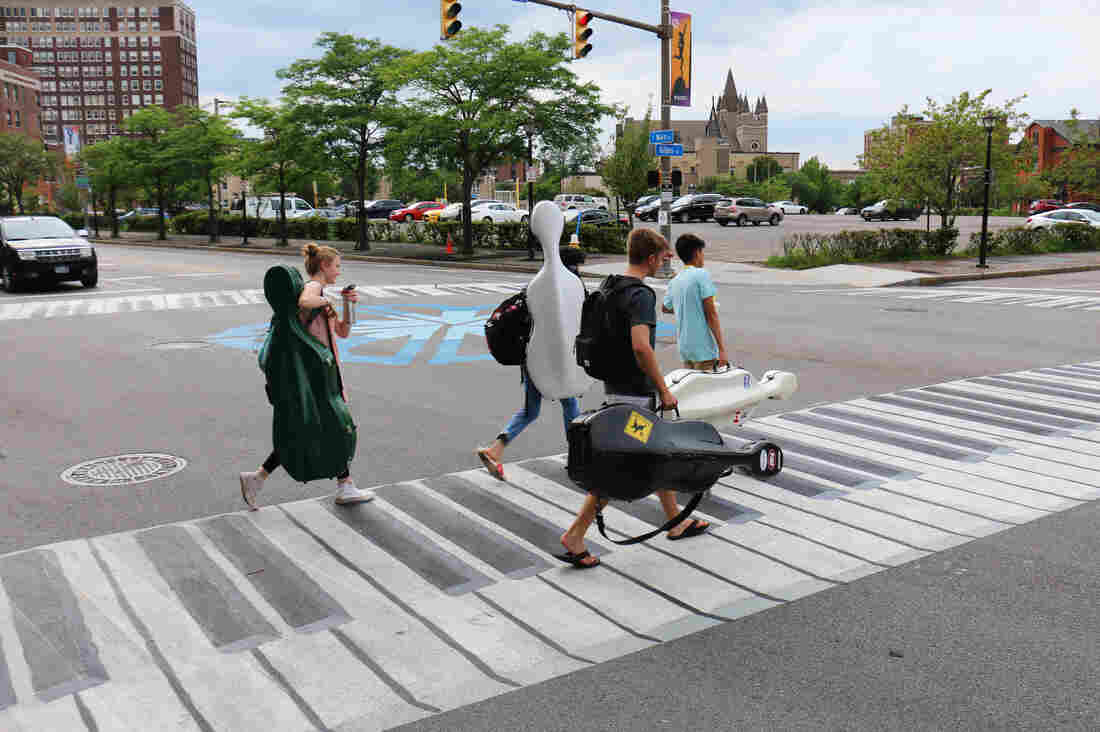 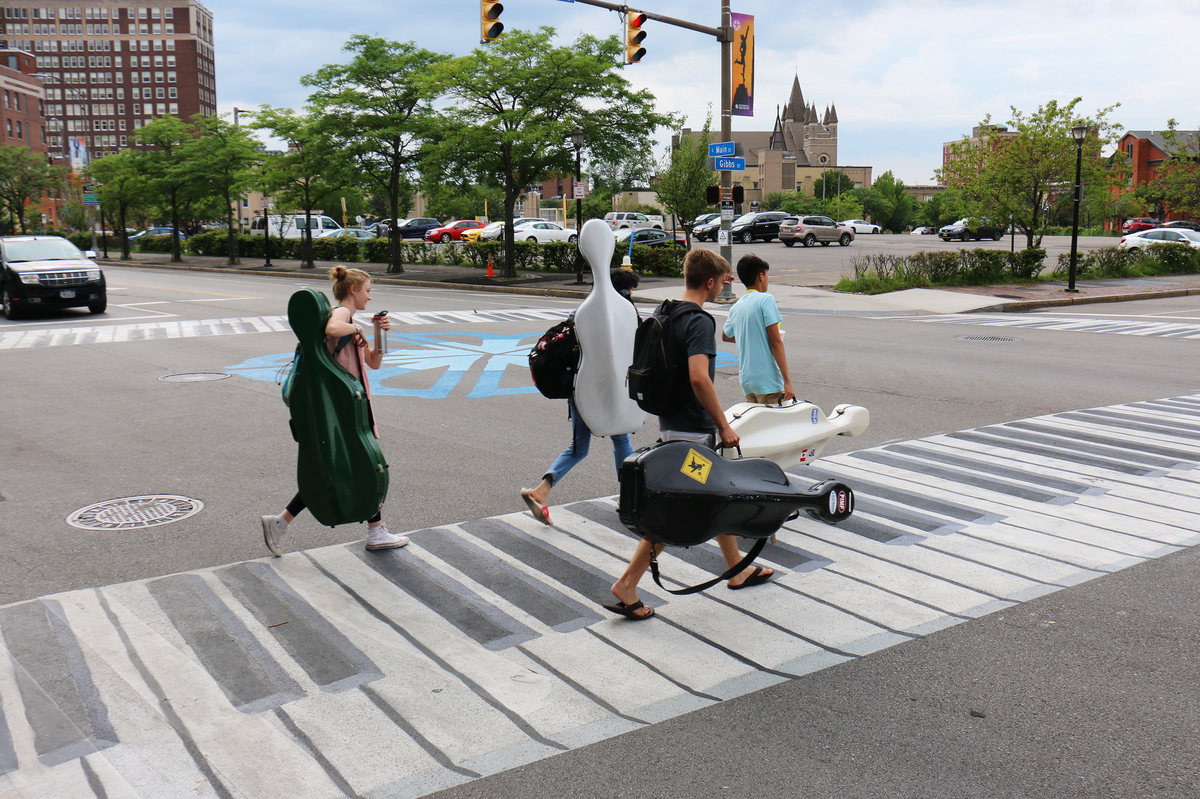 Musicians walk on a crosswalk painted like a piano outside the Eastman School of Music in Rochester, N.Y. Increasingly, urban designers and transportation planners say this kind of art — colorful crosswalks and engaging sidewalks — leads to safer intersections, stronger neighborhoods and better public health.

One of the newest pieces of public art in Rochester, N.Y., is right in the middle of Main Street. Or, more accurately, it's on the street.

Outside the Eastman School of Music, a group of volunteers repainted the crosswalk to look like three-dimensional piano keys in advance of the international jazz festival that happens here each year.

People walking by have been commenting on the artwork, but there's more here than meets the eye.

Intersections have had a pretty standard look in the United States for decades. The blank square of pavement, the white lines of crosswalks. Increasingly, urban designers and transportation planners say colorful crosswalks and engaging sidewalks lead to safer intersections, stronger neighborhoods and better public health. But the growing push for intersection creativity is meeting some resistance from the federal government.

And with pedestrian deaths in the U.S. at a 30-year high, those planners say, finding new ways to protect people from cars is becoming more urgent.

Just off Main Street, in Rochester's Beechwood neighborhood, there's another colorful intersection. The sidewalks here are green, the crosswalks are blue, and there's a big, red and yellow sun that covers the whole street. The art has been here a little over a year.

"Cars slowed down," says Joseph Hutchings, who has lived in the area for more than a decade. "Ain't nobody speeding up right here no more," he says. "People feel safer." 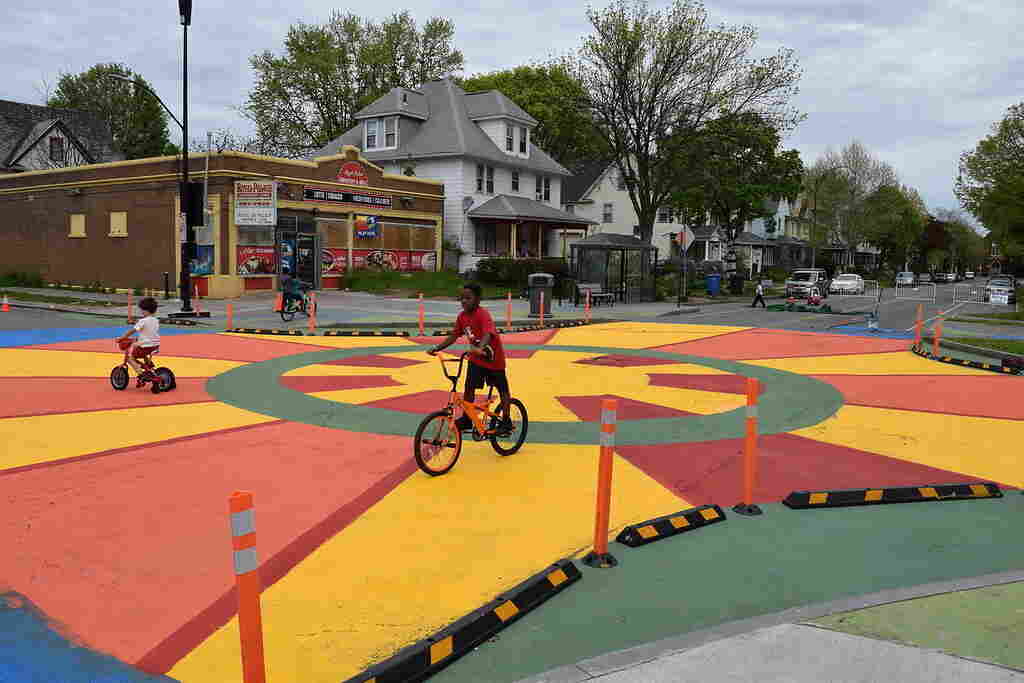 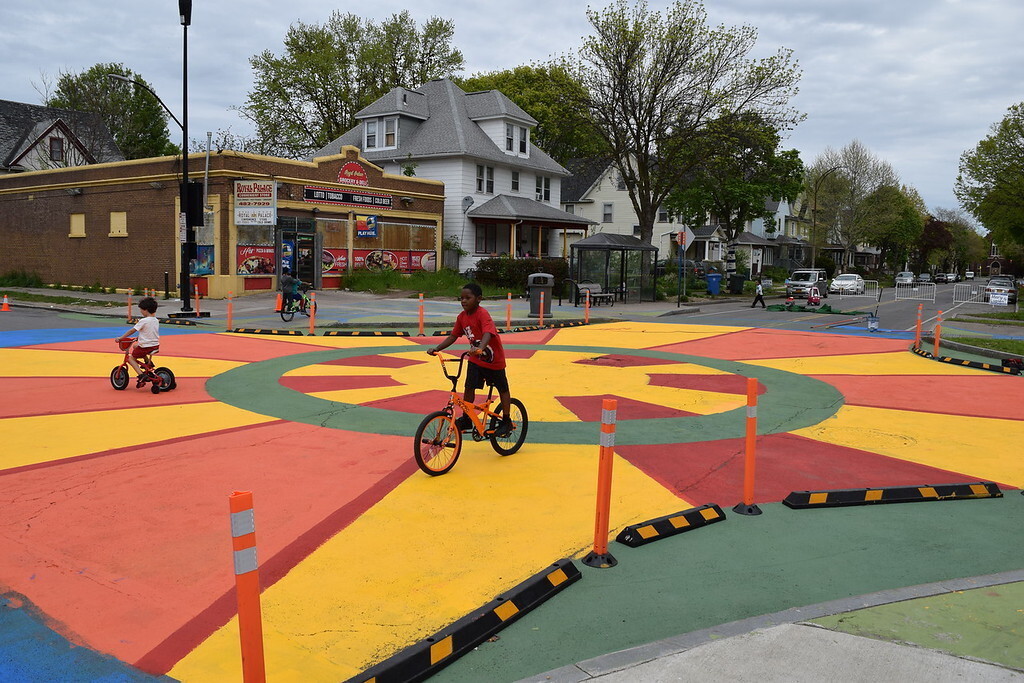 Children bike across this colorful intersection.

Hutchings says the intersection art makes a big difference for families. He says there are more children outside playing and more adults walking places or riding bikes.

Mike Bulger is a program coordinator at Common Ground Health, the Rochester nonprofit that planned the intersection redesign. He says that's exactly what the art is intended to do.

"It's a nudge toward the healthier option and the safer behavior," Bulger says.

One of the streets that runs through the intersection is an old streetcar route. It's a straight, wide road. "You can lay on the gas. You got plenty of room around you," Bulger says. But the eye-catching art is a reminder that "this isn't just a highway."

Bulger says slowing down traffic has ripple effects. It makes the space inviting. It's somewhere people want to be, instead of just get through. A growing number of urban planners and researchers, from the Federal Highway Administration, to AARP, to the Governors Highway Safety Association say that brings people outside, reducing crime and increasing the number of people getting around without cars.

When infrastructure encourages active transit, like walking or bicycling, the result is public health gains, says Ruth Steiner, who directs the Center for Health and the Built Environment at the University of Florida.

"The way an urban area is constructed speaks volumes about how people will navigate it," Steiner says.

"This is not an entirely new idea, using color to indicate pedestrian-friendly spaces," she says, "but I would say I'm encountering it more often now."

Indeed, cities across the country have embraced the idea.

Despite the Federal Highway Administration's finding that aesthetically pleasing intersections bring a range of benefits, the agency has taken issue with several examples.

Officials in St. Louis decided in 2016 to let the color in artistic intersections fade away after the highway administration said they could distract drivers.

A year later, the agency asked officials in Lexington, Ky., to remove a rainbow crosswalk downtown because it created "potential confusion for motorists" and danger for pedestrians.

In general, the agency says, "crosswalk art is actually contrary to the goal of increased safety and most likely could be a contributing factor to a false sense of security for both motorists and pedestrians."

The city of Rochester says its artistic intersections have threaded the needle between being creative and following the rules.

"It is complicated," says Shawn Dunwoody, who oversaw the painting of the piano crosswalk. "You've got to find that balance."