Accessibility links
Trump's Racist Rhetoric Takes America Back Again By repeating that these immigrants are "not ... you," the president defined them as "the other" in stark terms. The battle lines could not be more clear in a conflict nearly as old as America itself. 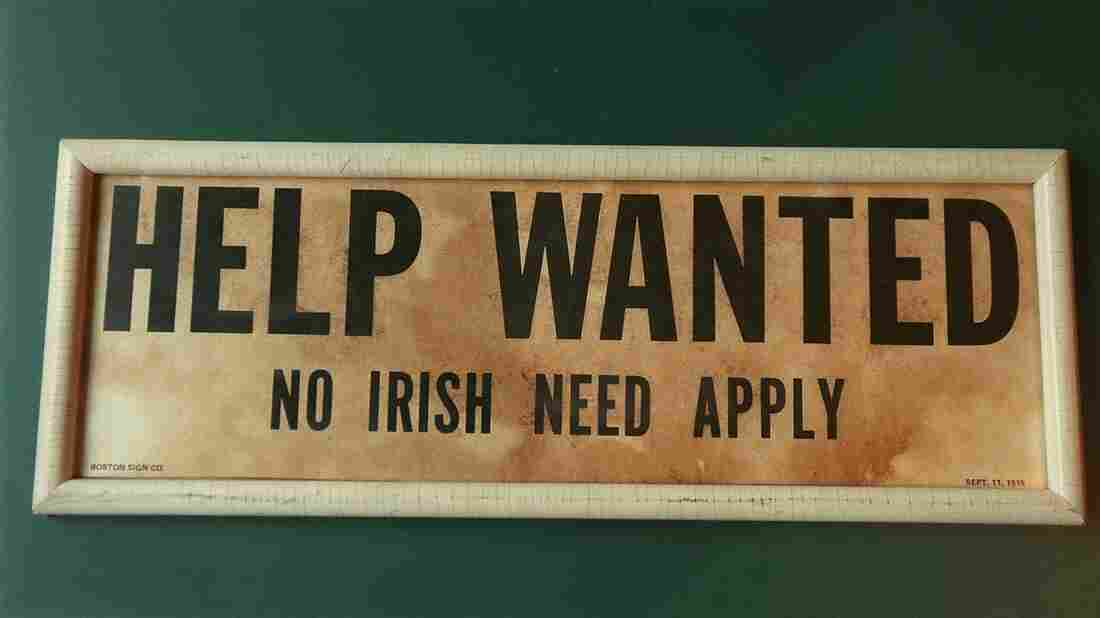 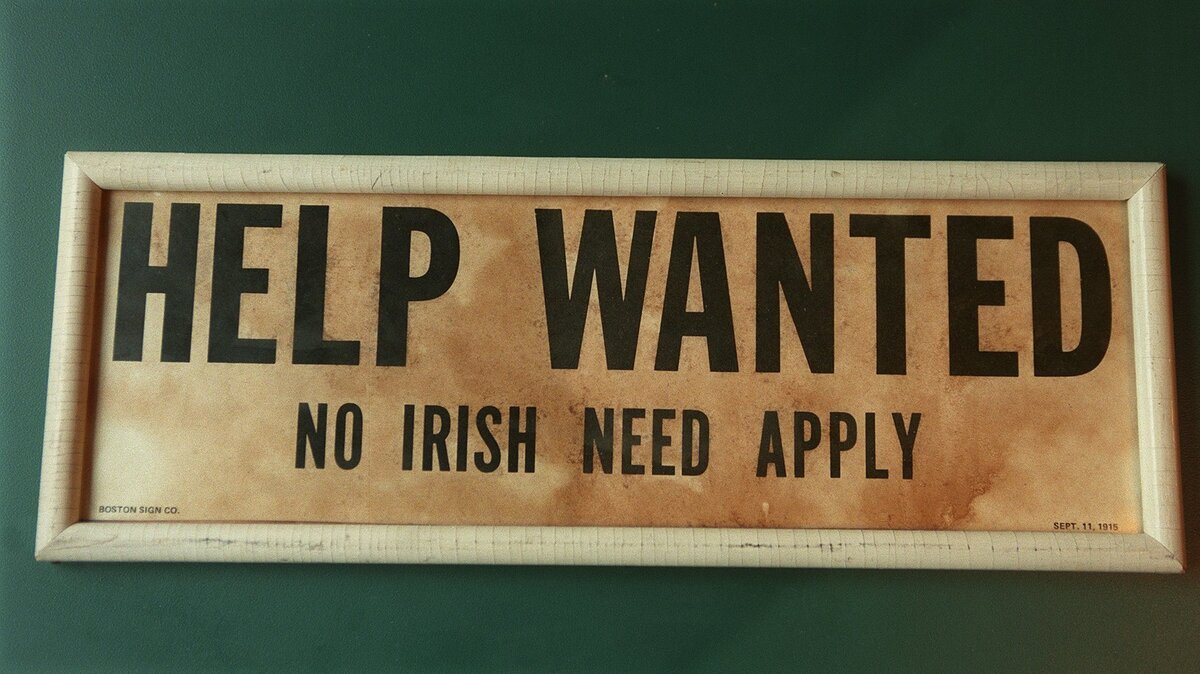 A now-closed Irish pub in Lawrence, Mass., displayed an old "Help Wanted/No Irish Need Apply" — a common sight across the country in the mid-1800s.

With his latest round of attacks on four first-year members of Congress who are women of color, President Trump has once again touched the raw nerve of racism in American life.

He has also tapped into one of the oldest strains in our politics — the fear and vilification of immigrants and their descendants.

Although three of the four women were born in the United States, the president said they should all "go back" where they came from. That phrase has echoed down generations of nativist discourse as successive waves of newcomers have been targeted by individuals, groups and even whole political parties.

At times, the motivations have been economic, focusing on competition for jobs and such social goods as housing or welfare programs. But there has also been a recurrent theme of cultural differences – an emphasis on characteristics of religion or language that identify new arrivals as "the other."

Anti-immigration sentiments emerged in force starting in the 1830s, when U.S. citizens descended primarily from English and Scottish settlers bridled at the influx of Irish. Most of the arriving Irish were Catholic, prompting a hostile reaction among some Protestants that led to deadly riots in Pennsylvania and Massachusetts. The persistence of such prejudice made "No Irish Need Apply" one of the most iconic signs in the national memory.

After the Irish, the hostile reaction extended to a surge of new arrivals in the 1840s from Germany, again largely Catholic. In ethnic terms, the Irish and Germans were akin to other colonial Americans (and to immigrants arriving from Scandinavia). But they were viewed as different, clannish and hard to assimilate. They were seen as not just competing for jobs but as threatening the social, cultural and political order.

They were pilloried as susceptible to criminality and drunkenness and seen as loyal to the foreign power of the pope in Rome. 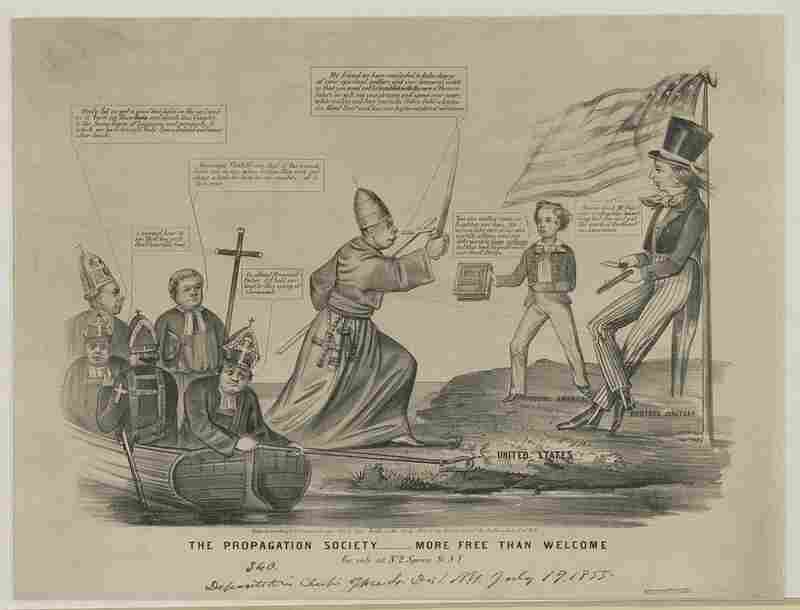 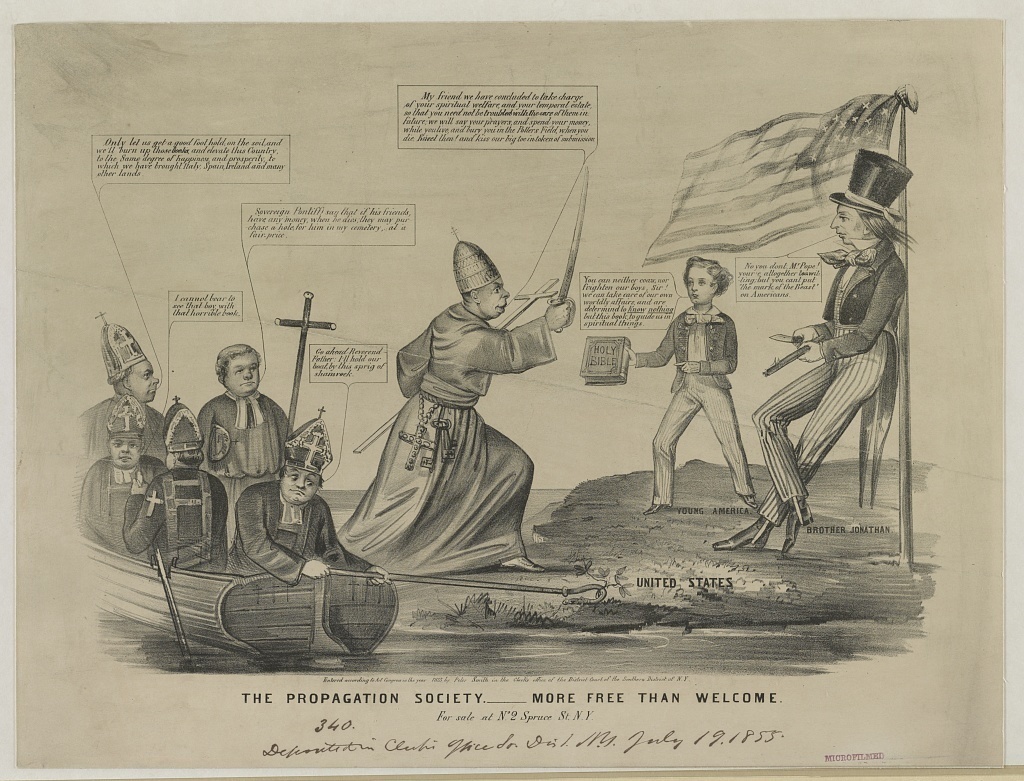 In this anti-Catholic cartoon circa 1855, Pope Pius IX steps ashore the United States. Read the full captions on the Library of Congress website.

Nathaniel Currier via Library of Congress

In the 1840s and 1850s, political parties formed in the U.S. to oppose the permissive immigration policies of the time. Some of these parties embraced the term "Native American," spawning the label "nativist" that has stuck to succeeding generations of immigration opponents.

Perhaps the best known of these was the American Party, which began as a semi-secret society ("The Order of the Star Spangled Banner"), with members being told to deny any knowledge of it.

When they claimed to "know nothing" of the group, they were pilloried as the "Know Nothing" party – a name that would long survive the entity itself. The party railed against the new arrivals as an economic, social and cultural threat that was bringing crime, disease, social unrest and the prospect of political takeover at the local level. 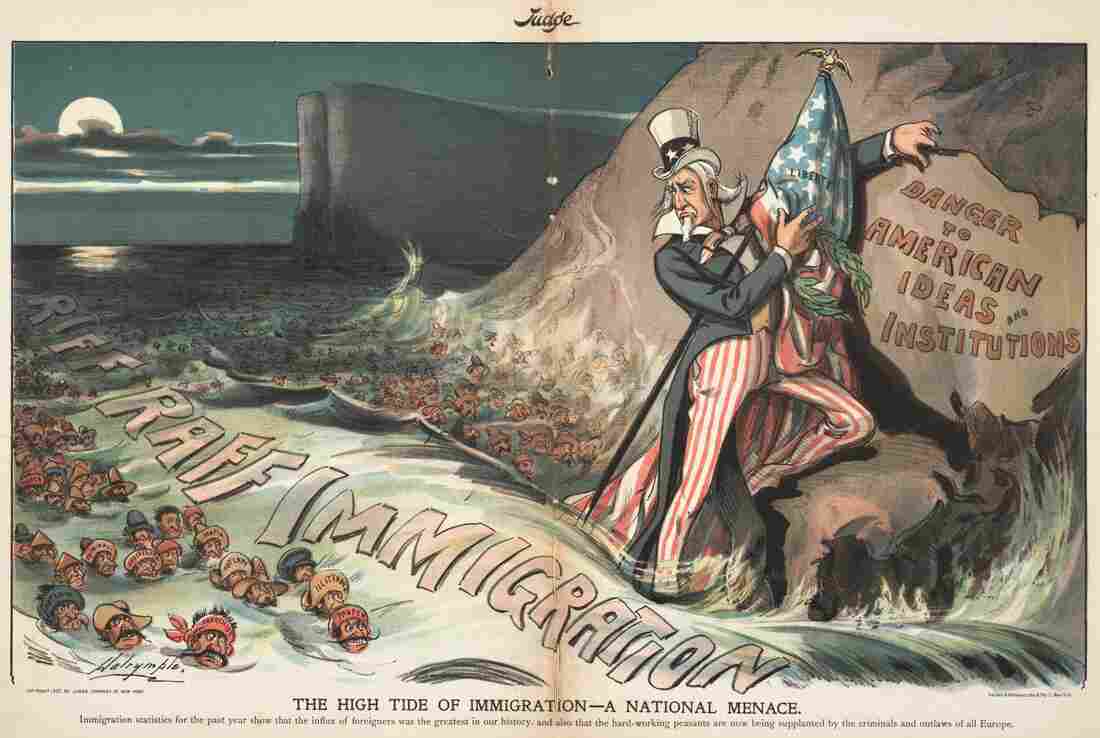 A cartoon published in Judge magazine in 1903 is titled "The High Tide of Immigration — A National Menace," with the caption: "Immigration statistics for the past year show that the influx of foreigners was the greatest in our history, and also that the hard-working peasants are now being supplanted by the criminals and outlaws of all Europe." The Ohio State University, Billy Ireland Cartoon Library and Museum hide caption 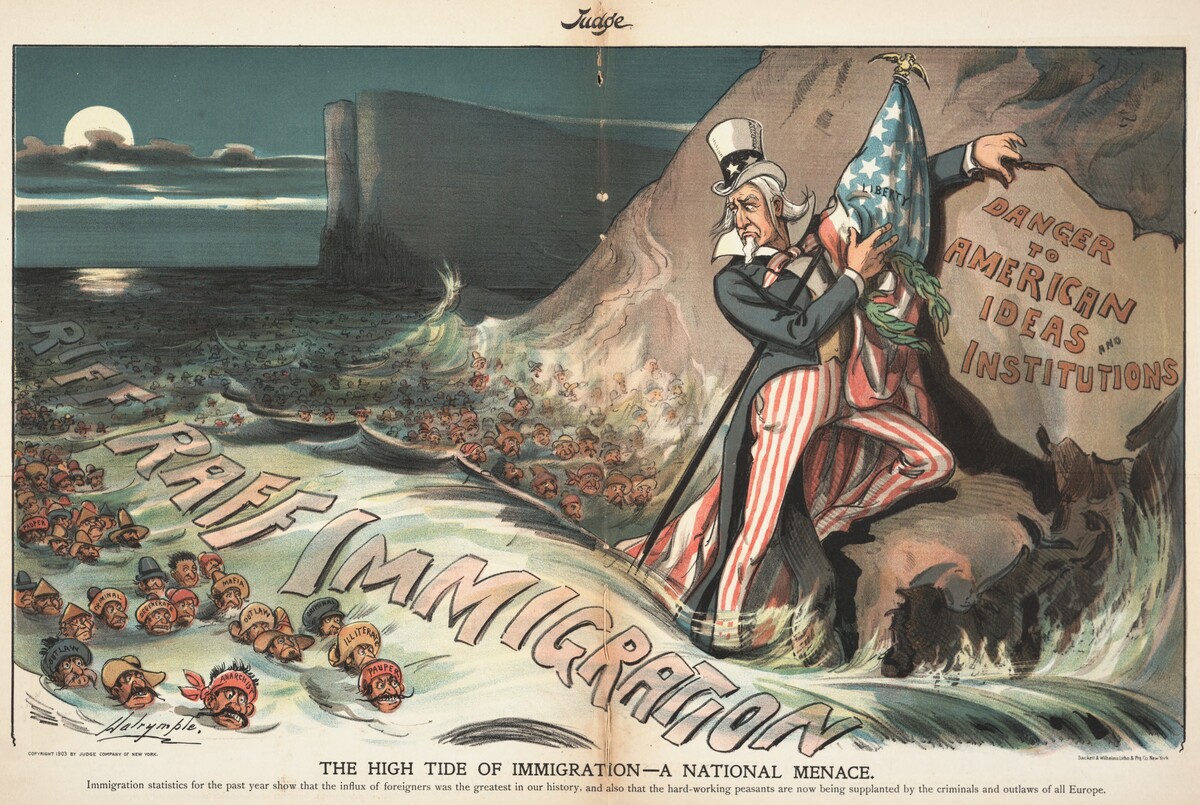 A cartoon published in Judge magazine in 1903 is titled "The High Tide of Immigration — A National Menace," with the caption: "Immigration statistics for the past year show that the influx of foreigners was the greatest in our history, and also that the hard-working peasants are now being supplanted by the criminals and outlaws of all Europe."

The Know Nothings had attracted scores of members of the U.S. Congress at the height of their influence in the mid-1850s, stepping into the vacuum left by the collapse of the Whigs.

In 1856, they nominated Millard Fillmore, a former president and former Whig, as their national candidate. Fillmore got 21% of the popular vote but only a handful of Electoral College votes, as many of the Know Nothings crossed over to vote for John Fremont, the first nominee of the fledgling Republican Party.

The 1860s brought the Civil War and a desperate need for soldiers, leading to greater acceptance of new arrivals who were willing to join the Union Army. In the years that followed, some immigrants found acceptance as veterans, others made their way west to farm the interior or work in its burgeoning cities.

The Know Nothings were not an organized force again after the Civil War, but resistance to immigration never left the national conversation. The importation of Asians to work on the Western railroads and harvests introduced another enduring chapter of American nativism. The Chinese Exclusion Act of 1882 was the first legislation to restrict immigration based on nation of origin. Some of the jobs denied to Chinese workers were soon filled by Mexicans.

Toward the end of the 1800s, the flow of immigrants from Europe swelled again and changed in its origin. The new arrivals now hailed from Eastern and Southern Europe, as well as from countries that had been sending opportunity seekers across the Atlantic for generations.

The proportion of U.S. residents who were foreign-born hit 13.5% in the census report of 1911, the highest it had ever been and a level not reached again until the present decade.

When the World War I ended, anti-immigration sentiment reached a new level of intensity as it swept much of the country, helping to fuel a resurgence of the Ku Klux Klan among other extremist groups.

An old association of immigration and urbanization was renewed when the census of 1920 showed immigrants had helped shift the center of U.S. population from rural areas to cities and big towns. Congress, dominated by members from rural, traditional parts of the country, simply refused to reapportion its seats and redraw election districts to reflect the new numbers.

That refusal lasted through four biennial election cycles, during which time Congress also passed an emergency ceiling on annual immigration levels and then lowered that by half again in the Immigration Act of 1924. That law set quotas by country of origin and explicitly preferred Northern Europeans over all others.

The official attitude in the 1920s and 1930s included an ambivalence toward refugees from conflicts around the world. In 1939, a German ship called the St. Louis tried to make port in Florida with more than 900 passengers, most of them Jewish refugees seeking asylum from Nazi persecution in Germany.

U.S. officials in the administration of President Franklin Roosevelt refused to let them land. They tried to persuade Cuba to take them, but without success. The ship returned to Europe, where many of the passengers were later arrested. Researchers believe that more than 250 perished in the Holocaust.

A generation later, in 1965, Congress passed a more liberal immigration law that eliminated quotas based on nation of origin. The law sought to reunite families and level the playing field for prospective immigrants around the world – and its impact went far beyond what its sponsors might have imagined.

The proportion of foreign-born in the U.S. population rose again from just 5% in 1965 to 14% over the next half century. And these new waves of arrivals would be far more diverse than their predecessors were. They came not only from different parts of Europe but from Asia, Africa and South America as well.

By the 1970s, the political focal point was the effect the law was having on the Southwest and the influx of Mexicans and other Spanish-speaking populations. Pressure for changing the law grew as latter-day nativists again saw the new arrivals as a social, cultural and political challenge.

Many of the same arguments made against previous generations of newcomers were lodged again against Hispanics, including that they would cling to their national culture and language and refuse to assimilate.

Labor groups also sought to control the competition from workers willing to take lower wages. But there were powerful business interests, particularly from the agricultural sector, determined to preserve access to migrant workers.

In 1986, the Simpson-Mazzoli Act sought to control future immigration, but also granted amnesty to millions of the undocumented people who were already residents. President Ronald Reagan signed it into law. It was a compromise meant to appease all sides, but it satisfied few.

President George W. Bush, who had long enjoyed high levels of Hispanic support as a candidate in Texas, threw his support behind a comprehensive overhaul of immigration laws in the mid-2000s. He was joined by Republican rival Sen. John McCain of Arizona and by the Democratic leadership. But conservatives more generally opposed the bill as another extension of amnesty, despite all the sponsors' denials.

Since then, the Republican Party has moved far from the Reagan-Bush-McCain attitudes on immigration and embraced the nativist tradition that has also been an element in the mix of its history back to 1856.

Declaring his presidential candidacy in June of 2015, Trump issued his much-quoted summary of immigrants:

In the past two days, we have seen the president return to that blunt language in describing four women who were elected to Congress in November 2018, largely on the passion of their opposition to the nativism that he, and much of his party, have embraced.

The battle lines could not be clearer. And it is a battle that is nearly as old as America itself.