Accessibility links
Corals In Florida Are Dying, But Warming Waters Aren't The Only Cause A new study from the Florida Keys shows that a lot of the stress on corals comes from local sources, providing hope that community action can help save them. 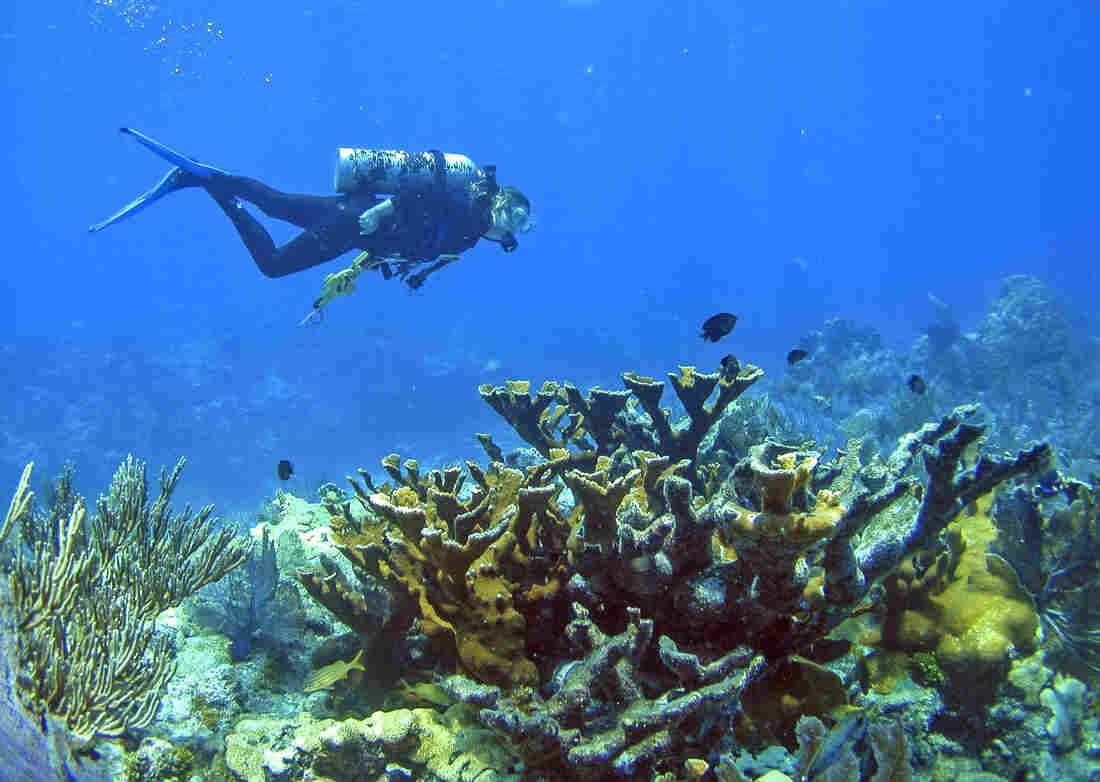 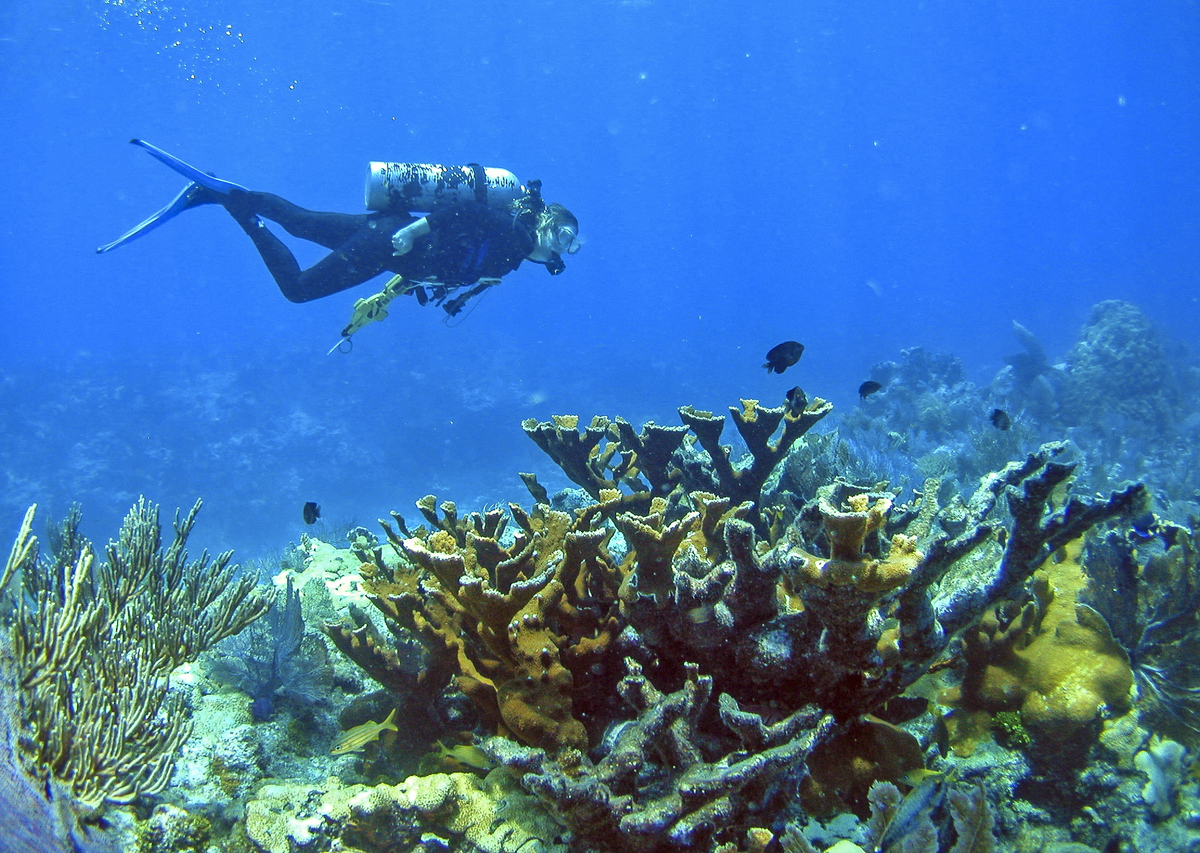 Diver swimming over Elkhorn Coral in the Florida Keys. Elevated nutrients as well as elevated temperatures are causing a massive loss of this iconic branching species in Florida.

Brian Lapointe, a research professor at Florida Atlantic University's Harbor Branch Oceanographic Institute, has spent his career studying corals at the Looe Key Reef, in a National Marine Sanctuary in the Florida Keys.

Over that time, he's witnessed an alarming trend. In the past 20 years, half of Florida corals have died off.

"Watching the decline of coral at Looe Key has been heartbreaking," Lapointe says. "When I moved here in the early 1980s, I had no idea that we would be losing these corals."

Lapointe is lead author on a new paper in the journal Marine Biology. It analyzes 30 years of data he's collected. When he started his research, in 1984, coral covered 33% of the Looe Key Sanctuary Preservation area, 5.3 square nautical miles of protected ocean at the southern tip of the Florida Keys. By 2014, the coral cover had dropped to just 5%.

But the news may not be entirely bad.

Lapointe thought his study would show that warming temperatures were killing off corals. Instead, the data show that the coral's biggest problem has been another human source: nitrogen.

Too much nitrogen, from poorly treated sewage, as well as fertilizer and topsoil from yards and farms, is messing up the water quality in the coral habitat, his data show.

And when it comes to a fix, it's easier to reduce nitrogen levels than to reverse climate change, Lapointe says.

His conclusion? "There actually is hope for coral reefs after all." 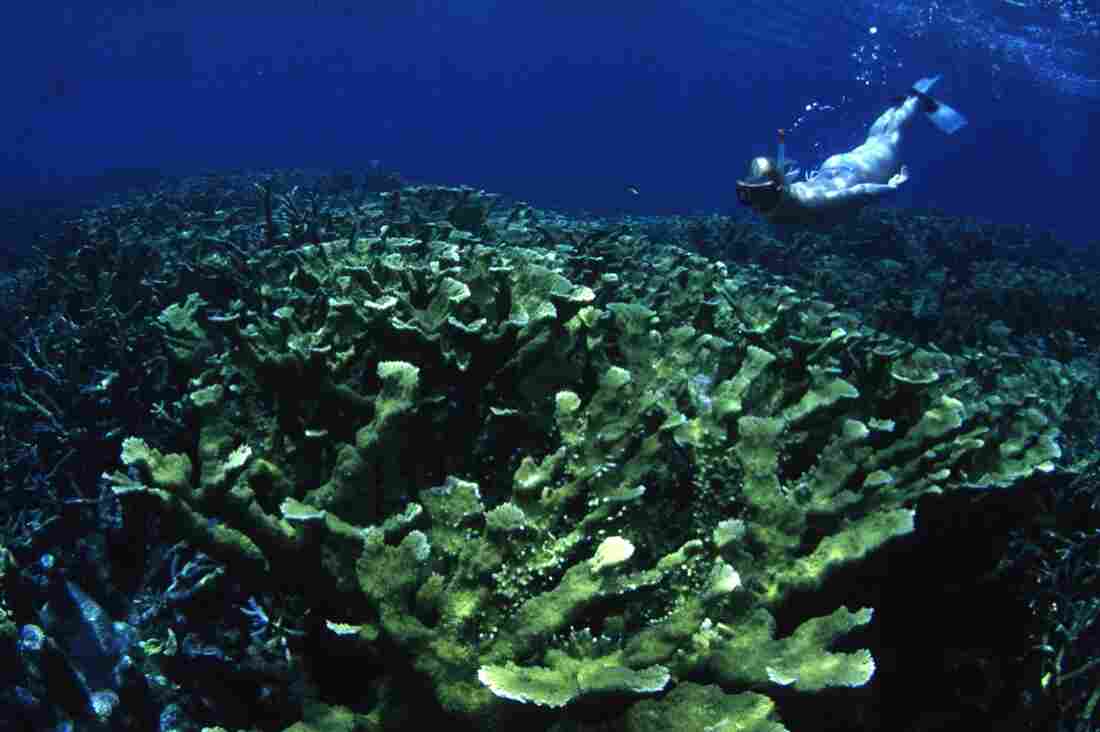 A snorkeler swims among healthy Elkhorn corals off Key Largo in the Florida Keys in the early 1980s. The Elkhorn coral is one of the most important corals in the Caribbean. Current populations are struggling to recover from coral disease and bleaching. Larry Lipsky hide caption 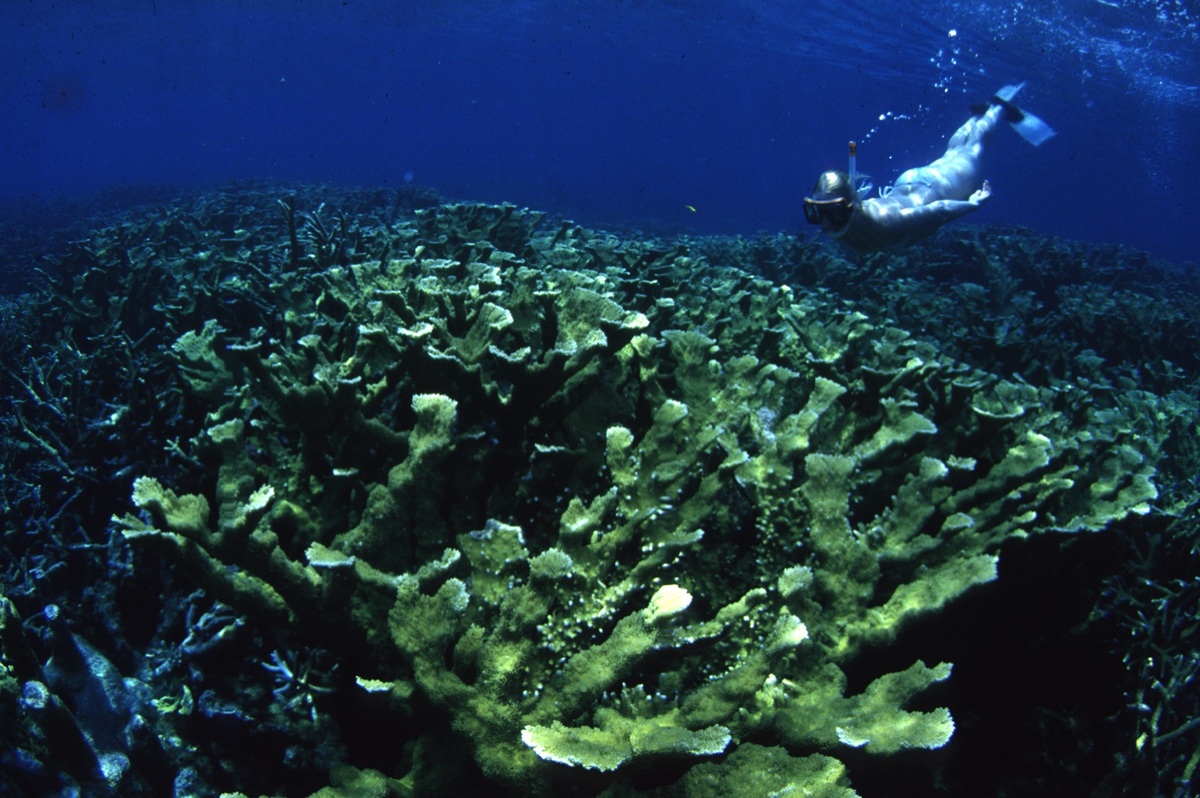 A snorkeler swims among healthy Elkhorn corals off Key Largo in the Florida Keys in the early 1980s. The Elkhorn coral is one of the most important corals in the Caribbean. Current populations are struggling to recover from coral disease and bleaching.

Excess nitrogen feeds blooms of algae that block out the light. It also throws off the nutrient balance in the water in ways that disrupt the coral's life cycle.

"The corals are assimilating nutrients from the water column," Lapointe explains.

As the nitrogen has increased, it hasn't been balanced by a similar increase of phosphorus, a mineral corals need to grow. The imbalance, according to Lapointe, is starving the corals of phosphorus.

"This [nitrogen to phosphorus imbalance] is what we now realize is increasingly stressing the corals at Looe Key, and probably other areas of Florida and the world," he says.

It makes the corals unhealthy, and more susceptible to disease, to go through coral bleaching, and to die, he says.

"What our study shows is that water quality and not just water temperature are important for coral survival," says James W. Porter, emeritus ecology professor at the University of Georgia, and a co-author on the paper.

Michael Fox, a post-doc studying coral reefs at the Woods Hole Oceanographic Institution, was not involved in the study, but he appreciates that it takes a long-term view. He sees the study in the context of similar monitoring studies of coral communities in Australia and the Caribbean.

"We're starting to have enough data to really track the impact of local-scale stressors to corals, over long enough time frames to understand how the communities are changing," he says, adding that it allows researchers to start teasing out the difference between local impacts and more global ones.

"In the past, most scientists and the lay public have said 'Oh, it's all due to global warming and there's nothing we can do,'" says Porter. "What our study shows is that taking care of nutrients on the reef, runoff from the land — which is a local phenomenon — that can protect coral reefs too." 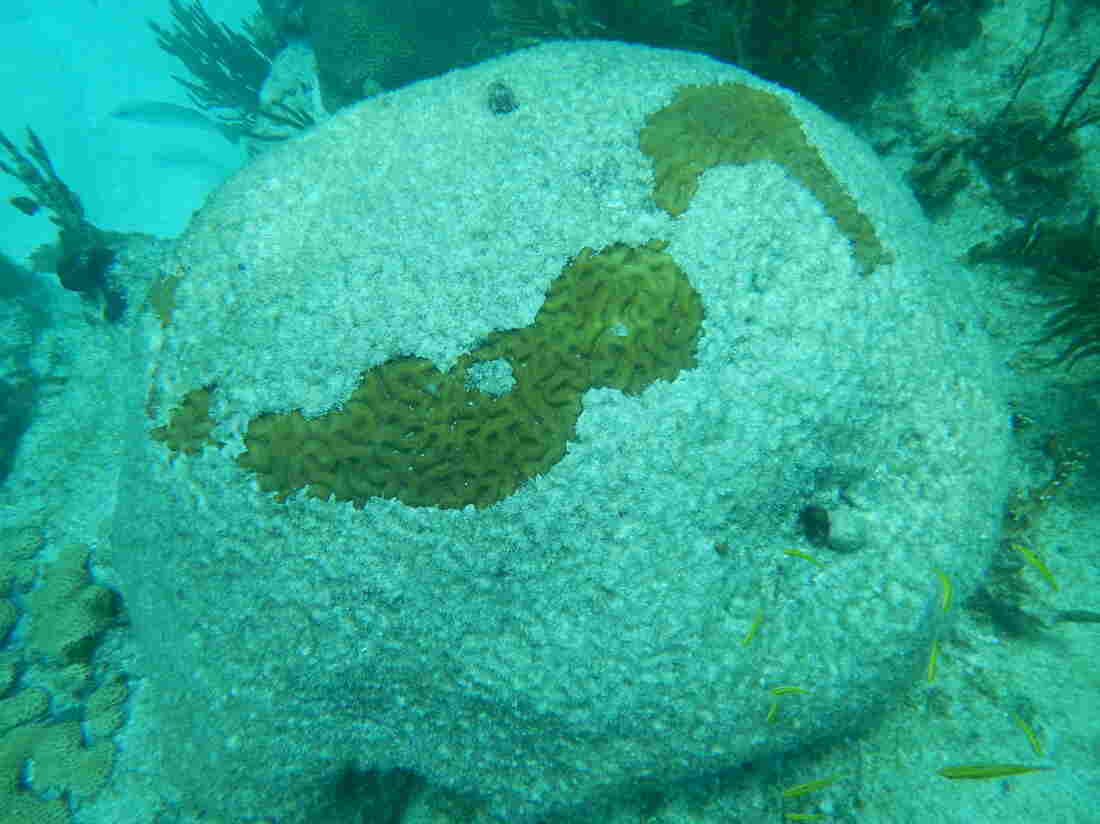 While the study focuses on the Florida Keys, Porter says the findings apply to reefs around the world, including the Great Barrier Reef, which receives runoff from sugarcane fields in Queensland, similar to the Keys.

"The most important thing that we can do as residents is to try and minimize our impact by cleaning up our water," says Rachel Brewton, a research coordinator at Florida Atlantic University and study co-author. Individuals, she says, can start with managing the fertilizers they put on their lawns.

On local and regional levels, the study authors say that better sewage and storm-water management can reduce nitrogen pollution. The Bonaire coral reefs in the Caribbean, for example, started to recover after a new sewage treatment plant opened in 2011. The researchers say it could give corals a fighting chance to survive the conditions of climate change.