Accessibility links
Trump Racist Language: Constituents React With Fury And Shrugs "I think that as negative as he is, and as much as a troublemaker as he is," says Chris Kennedy, "[Trump] is contributing to a very positive forward momentum." 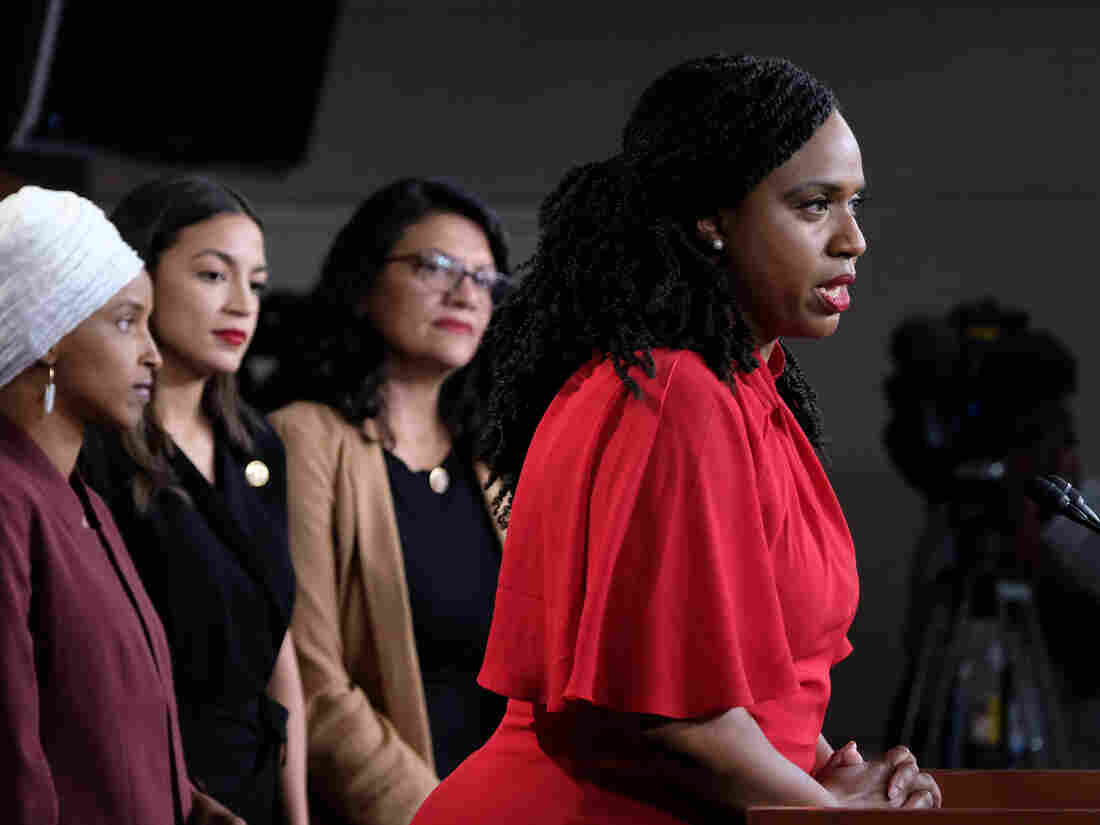 From Right: U.S. Reps. Ayanna Pressley, Rashida Tlaib, Alexandria Ocasio-Cortez and Ilhan Omar at a press conference at the Capitol on Monday. President Trump has accused the "squad" of hating America and has said they should "go back" to where they came from. Alex Wroblewski/Getty Images hide caption 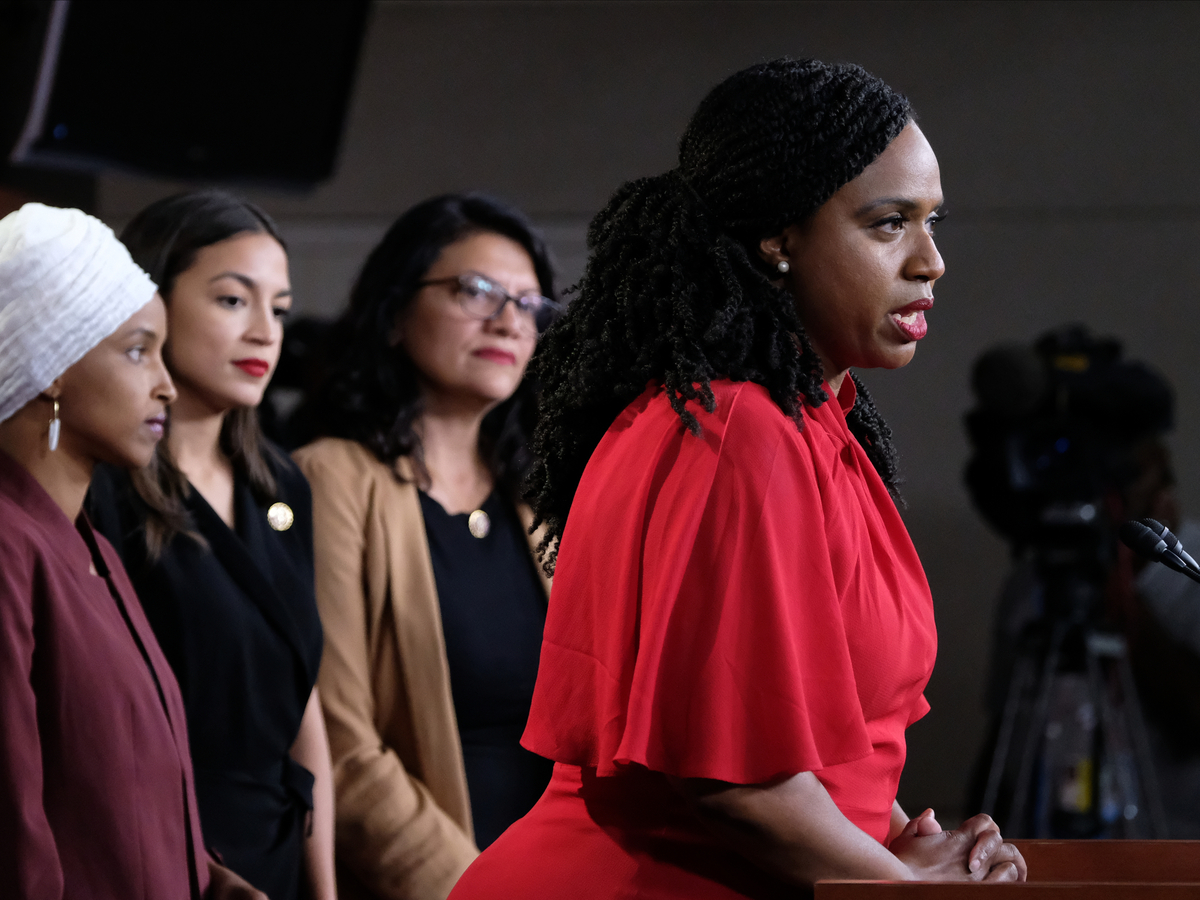 From Right: U.S. Reps. Ayanna Pressley, Rashida Tlaib, Alexandria Ocasio-Cortez and Ilhan Omar at a press conference at the Capitol on Monday. President Trump has accused the "squad" of hating America and has said they should "go back" to where they came from.

President Trump is showing no signs of dialing back what Democrats are calling a "blatantly racist attack" on four members of Congress, who are all women of color. Trump is accusing the "squad" of "radical Democrats" of hating America and has said they should "go back" to where they came from.

Three of the four congresswomen — Reps. Alexandria Ocasio-Cortez of New York, Rashida Tlaib of Michigan and Ayanna Pressley of Massachusetts — were born in the U.S. The fourth, Rep. Ilhan Omar of Minnesota, became a U.S. citizen at age 12. House Speaker Nancy Pelosi called the use of the racist trope "disgusting" and vowed a resolution condemning the president's language, while Omar and Tlaib, the first two Muslim women elected to Congress, said Trump's xenophobic attack was new grounds for impeachment. Pressley, who is African American, blasted the president for "the callous, chaotic and corrupt culture of this administration."

The president seems more buoyed by the criticism than bothered, insisting that "a lot of people love" his Twitter attack on the progressive Democrats. But in the Massachusetts district where Pressley was elected, constituents are far more livid than loving it. Even those who support the job Trump's doing as president are rolling their eyes at his antics as they decide to look past them.

Polonsky, an anti-Trump political cartoonist, says he's deeply offended by the president's latest comments, but not surprised. He sees it as a deliberate political stunt meant to rally Trump's base.

"It was flat out racist. I don't think there's anything grey about it, and I'm horrified that he represents our country," echoes Deanna Byrne, a Democratic political activist who has worked for Pressley's campaign. As she sees it, Trump has hit a new low — yet again.

"It's dangerous because he's normalizing this," she says. "And if the bar keeps moving in that direction, what's the situation going to be two more years from now?" 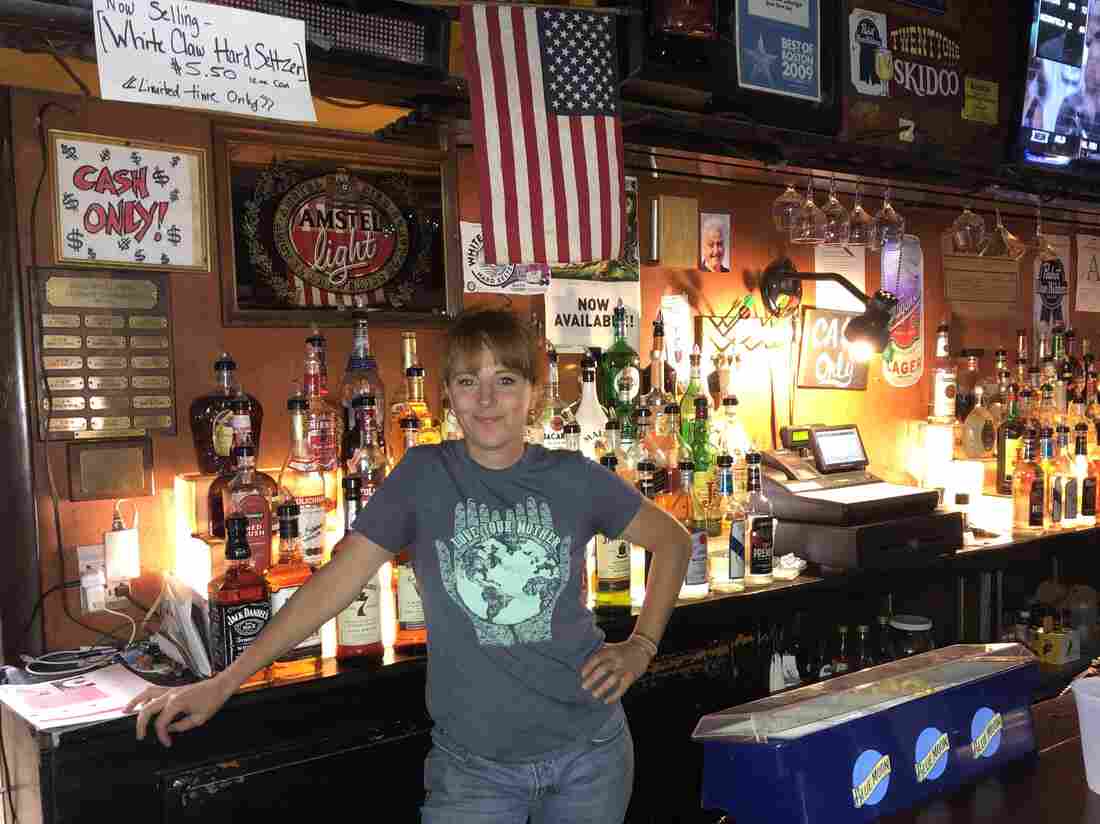 Sarah Leib, a bartender at Silhouette Lounge in Allston, Mass., believes Trump is not only dragging down the public discourse, but he's jacking up resentment among white Americans. Tovia Smith/NPR hide caption 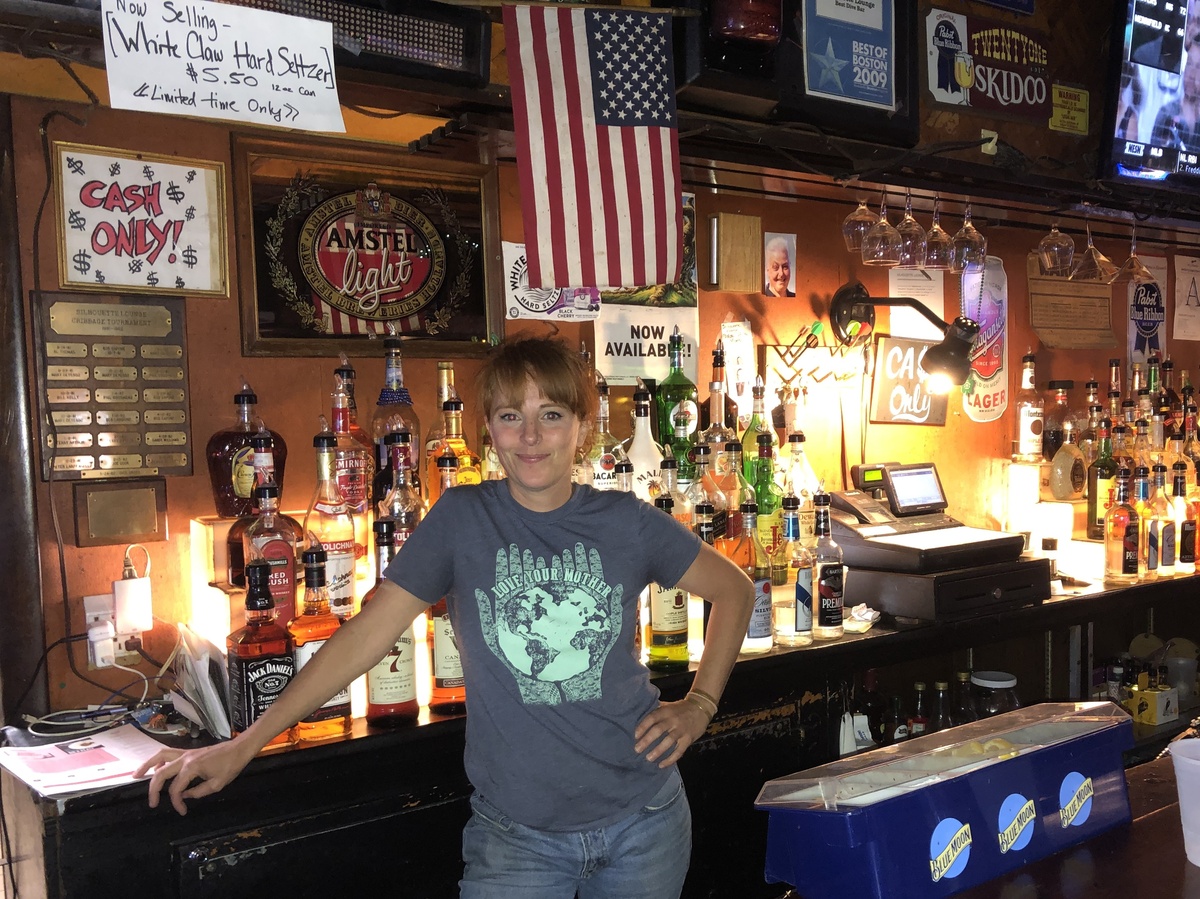 Sarah Leib, a bartender at Silhouette Lounge in Allston, Mass., believes Trump is not only dragging down the public discourse, but he's jacking up resentment among white Americans.

Around the corner at a neighborhood dive called the Silhouette Lounge, bartender Sarah Leib says the damage is already apparent. Trump is not only dragging down the public discourse, she says, but he's also jacking up resentment among white Americans. She points to a recent incident when she refused to serve a man drinks because he was already drunk.

"He accused me of not serving him because he's a white male," she recalls. "He made himself out to be the victim of a big conspiracy. I've never seen anything like that."

Leib says Trump's comments were not only offensive, but also absurd. Members of Congress, she says, don't deserve to be attacked simply because they're being critical of policies.

"That's what they're supposed to do," she says. "I mean, they're doing their job, and they're doing it effectively. But [Trump's] ego is so fragile that he says some asinine thing that [becomes] news."

Ana Maria Arabanos, 23, who was sipping a drink at the bar, also takes offense at Trump's antics but sees a silver lining: The whole uproar is focusing positive attention on the "squad" — including her congresswoman, Pressley, she says.

"I'm grateful we do have leaders that are representative of me, like being a woman of color, who are standing up to Trump," she says. "It's putting them in the spotlight."

Another patron, 60-year-old Republican Chris Kennedy, who voted for Trump, sees a different upside. While he doesn't like the president's comments, he says he's happy that Trump is drawing attention to issues he cares about, like immigration policy.

"I think that as negative as he is, and as much as a troublemaker as he is," Kennedy says, "[Trump] is contributing to a very positive forward momentum because politicians behind him will have no choice but to focus on these issues that he has pushed to the surface."

Bill Rhodes, 54, in town on business from Connecticut, is also a Trump fan. But, he explains, that's only because he "purposely" doesn't even look at Trump's tweets.

"You can't let it bother you because, I mean, he says stupid stuff every week," he says. "But as long as he's doing a good job, then that's good. I mean, my stock has soared, and you know, the economy's doing well."

That is far more important, Rhodes says, than Trump's comments, which he considers more questionable than overtly racist.

"Unless [Trump] actually called them out on race, I don't think it's racist," he says. "I mean, I've heard others say stuff like that too."

Alan Walter, 65, says he's among those likely to make a comment like Trump's, and he loves that the president is proving he doesn't cow to political correctness. Walter points his disappointment instead at Democrats who he says are unfairly playing the race card.

But Walter also agrees with Trump critics on one thing: that the president's controversial comments are less a slip of the tongue than a deliberate strategy aimed at winning him a second term in office.