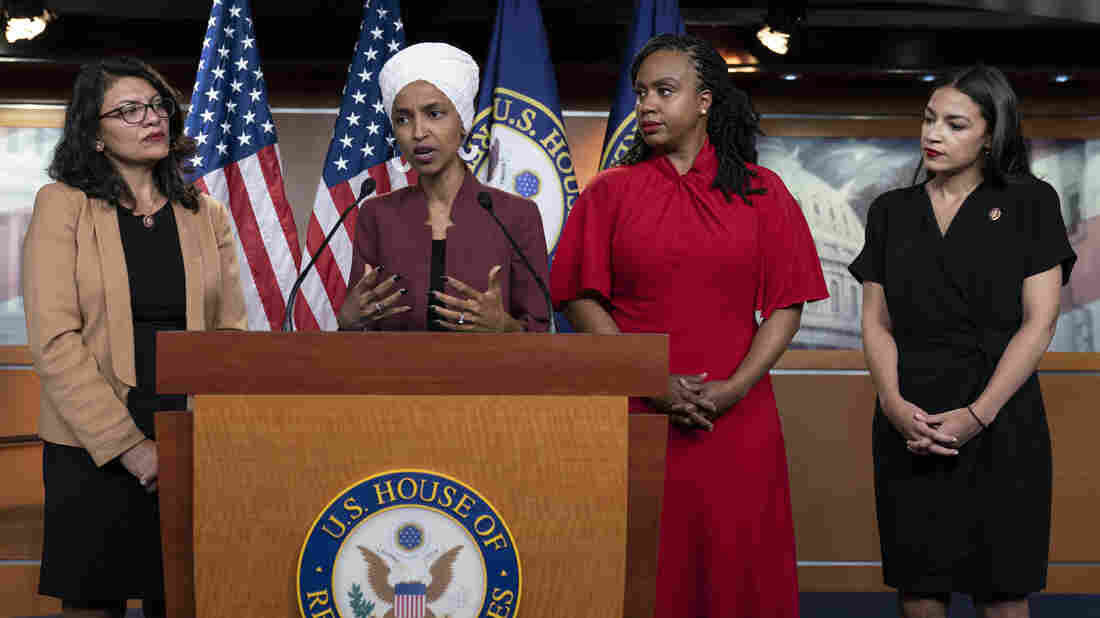 From left, Democratic Reps. Rashida Tlaib of Michigan, Ilhan Omar of Minnesota, Ayanna Pressley of Massachusetts and Alexandria Ocasio-Cortez of New York respond to attacks by President Trump in a press conference on Monday. The House passed a resolution condemning his comments on Tuesday. J. Scott Applewhite/AP hide caption 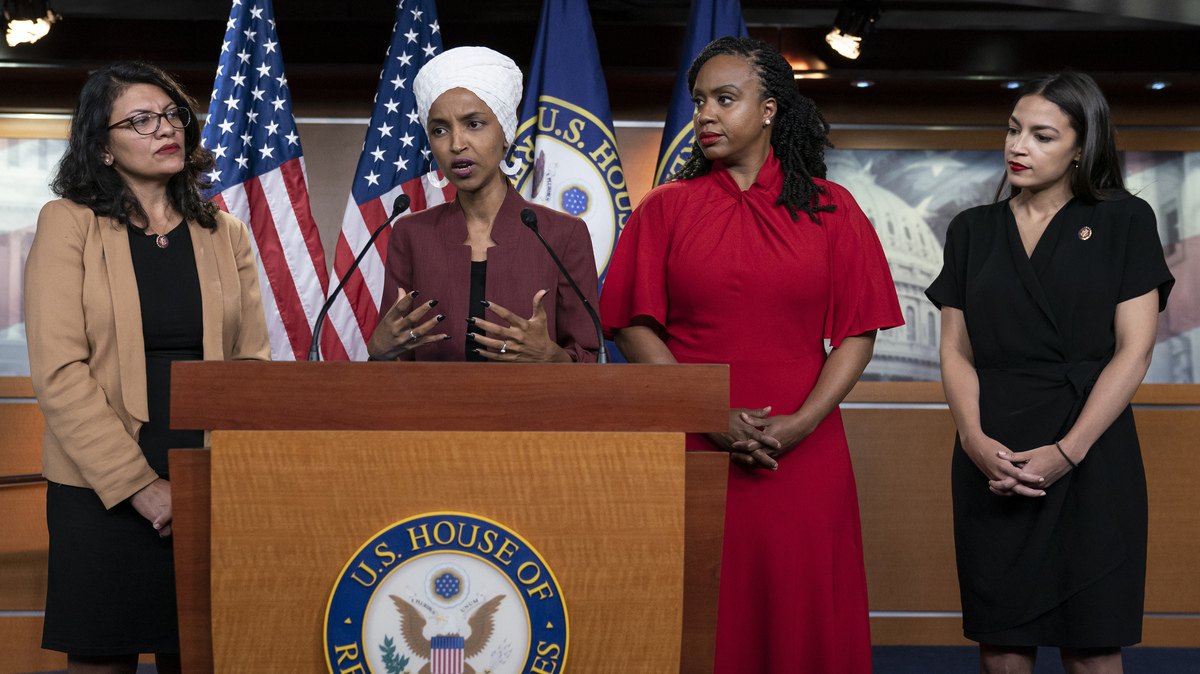 From left, Democratic Reps. Rashida Tlaib of Michigan, Ilhan Omar of Minnesota, Ayanna Pressley of Massachusetts and Alexandria Ocasio-Cortez of New York respond to attacks by President Trump in a press conference on Monday. The House passed a resolution condemning his comments on Tuesday.

The House passed a resolution condemning President Trump's "racist comments" on Tuesday evening. The nonbinding resolution states that Trump's remarks directed at members of Congress "have legitimized fear and hatred of new Americans and people of color."

It goes on to declare that "immigrants and their descendants have made America stronger"; that the House is committed to keeping America open to those lawfully seeking refuge and asylum from violence and oppression;" and that it "strongly condemns President Donald Trump's racist comments that have legitimized and increased fear and hatred of new Americans and people of color."

The resolution is sponsored by Rep. Tom Malinowski, D-N.J., who is Polish-born. Some of the co-sponsors also were born abroad.

The resolution comes in response to Trump's tweets, starting Sunday and continuing into the week, in which he said that a group of Democratic lawmakers, all women of color, should "go back" to countries of their ancestry and that they "hate" America.

Trump continued his broadsides against the four Tuesday, tweeting, "Why isn't the House voting to rebuke the filthy and hate laced things they have said? Because they are the Radical Left, and the Democrats are afraid to take them on. Sad!"

The four Democrats are Reps. Alexandria Ocasio-Cortez of New York, Ilhan Omar of Minnesota, Ayanna Pressley of Massachusetts and Rashida Tlaib of Michigan. All but Omar were born in the United States. Omar is a naturalized citizen from Somalia.

Trump's comments have been widely condemned by Democrats and a handful of Republican lawmakers. The vote on the resolution presented GOP lawmakers with the choice of going on the record against the president, who is popular within the party, or going along with his latest incendiary remarks. Four Republicans and one independent voted in favor of the resolution.

Read the full text below and see the document in its original form here.

Whereas the Founders conceived America as a haven of refuge for people fleeing from religious and political persecution, and Thomas Jefferson, Alexander Hamilton, and James Madison all emphasized that the Nation gained as it attracted new people in search of freedom and livelihood for their families;

Whereas the Declaration of Independence defined America as a covenant based on equality, the unalienable Rights of life, liberty and the pursuit of happiness, and government by the consent of the people;

Whereas Benjamin Franklin said at the Constitutional convention, "When foreigners after looking about for some other Country in which they can obtain more happiness, give a preference to ours, it is a proof of attachment which ought to excite our confidence and affection";

Whereas President Franklin D. Roosevelt said, "Remember, remember always, that all of us, and you and I especially, are descended from immigrants and revolutionists";

Whereas immigration of people from all over the Earth has defined every stage of American history and propelled our social, economic, political, scientific, cultural, artistic, and technological progress as a people, and all Americans, except for the descendants of Native people and enslaved African-Americans, are immigrants or descendants of immigrants;

Whereas the commitment to immigration and asylum has been not a partisan cause but a powerful national value that has infused the work of many Presidents;

Whereas American patriotism is defined not by race or ethnicity but by devotion to the Constitutional ideals of equality, liberty, inclusion, and democracy and by service to our communities and struggle for the common good;

Whereas President John F. Kennedy, whose family came to the United States from Ireland, stated in his 1958 book "A Nation of Immigrants" that "The contribution of immigrants can be seen in every aspect of our national life. We see it in religion, in politics, in business, in the arts, in education, even in athletics and entertainment. There is no part of our nation that has not been touched by our immigrant background. Everywhere immigrants have enriched and strengthened the fabric of American life.";

Whereas President Ronald Reagan in his last speech as President conveyed "An observation about a country which I love";

Whereas as President Reagan observed, the torch of Lady Liberty symbolizes our freedom and represents our heritage, the compact with our parents, our grandparents, and our ancestors, and it is the Statue of Liberty and its values that give us our great and special place in the world;

Whereas other countries may seek to compete with us, but in one vital area, as "a beacon of freedom and opportunity that draws the people of the world, no country on Earth comes close";

Whereas it is the great life force of "each generation of new Americans that guarantees that America's triumph shall continue unsurpassed" through the 21st century and beyond and is part of the "magical, intoxicating power of America";

Whereas this is "one of the most important sources of America's greatness: we lead the world because, unique among nations, we draw our people — our strength — from every country and every corner of the world, and by doing so we continuously renew and enrich our nation";

Whereas "thanks to each wave of new arrivals to this land of opportunity, we're a nation forever young, forever bursting with energy and new ideas, and always on the cutting edge", always leading the world to the next frontier;

Whereas this openness is vital to our future as a Nation, and "if we ever closed the door to new Americans, our leadership in the world would soon be lost"; and

Whereas President Trump's racist comments have legitimized fear and hatred of new Americans and people of color: Now, therefore, be it resolved, That the House of Representatives —

(1) believes that immigrants and their descendants have made America stronger, and that those who take the oath of citizenship are every bit as American as those whose families have lived in the United States for many generations;

(2) is committed to keeping America open to those lawfully seeking refuge and asylum from violence and oppression, and those who are willing to work hard to live the American Dream, no matter their race, ethnicity, faith, or country of origin; and

(3) condemns President Donald Trump's racist comments that have legitimized and increased fear and hatred of new Americans and people of color by saying that our fellow Americans who are immigrants, and those who may look to the President like immigrants, should "go back" to other countries, by referring to immigrants and asylum seekers as "invaders," and by saying that Members of Congress who are immigrants (or those of our colleagues who are wrongly assumed to be immigrants) do not belong in Congress or in the United States of America.