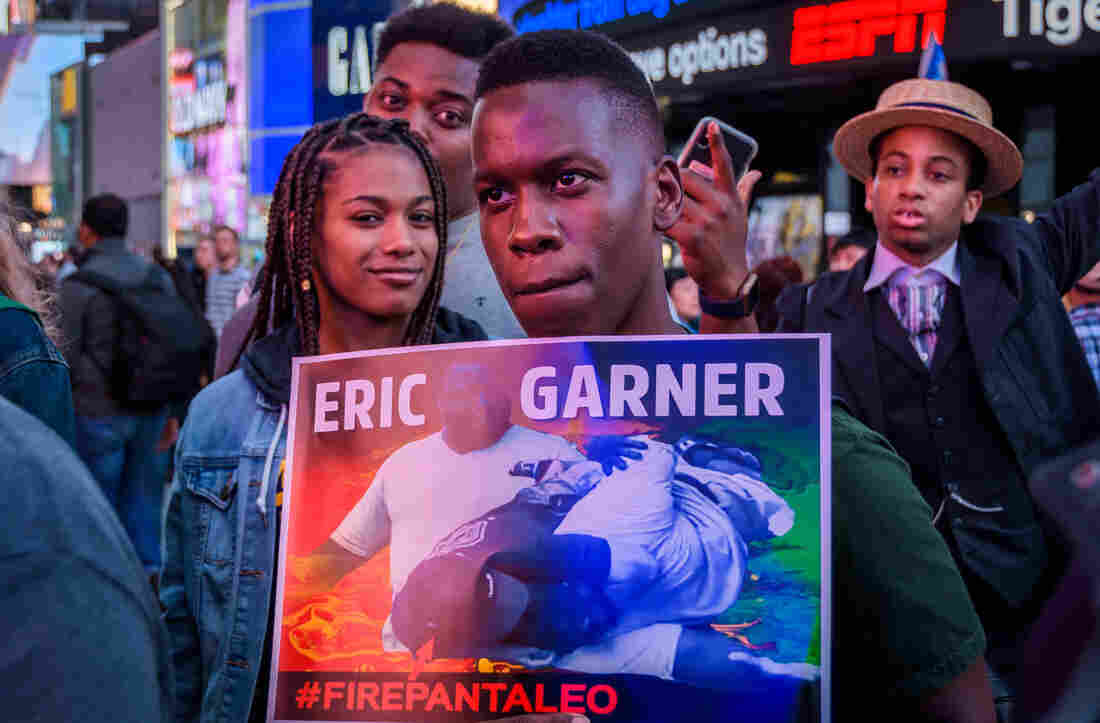 Members of Black Lives Matter of Greater New York and allies hold a protest rally last month in New York City's Times Square demanding justice for Eric Garner, who died after he was put in a chokehold by an NYPD officer in 2014. Erik McGregor/Pacific Press/LightRocket via Getty Images hide caption 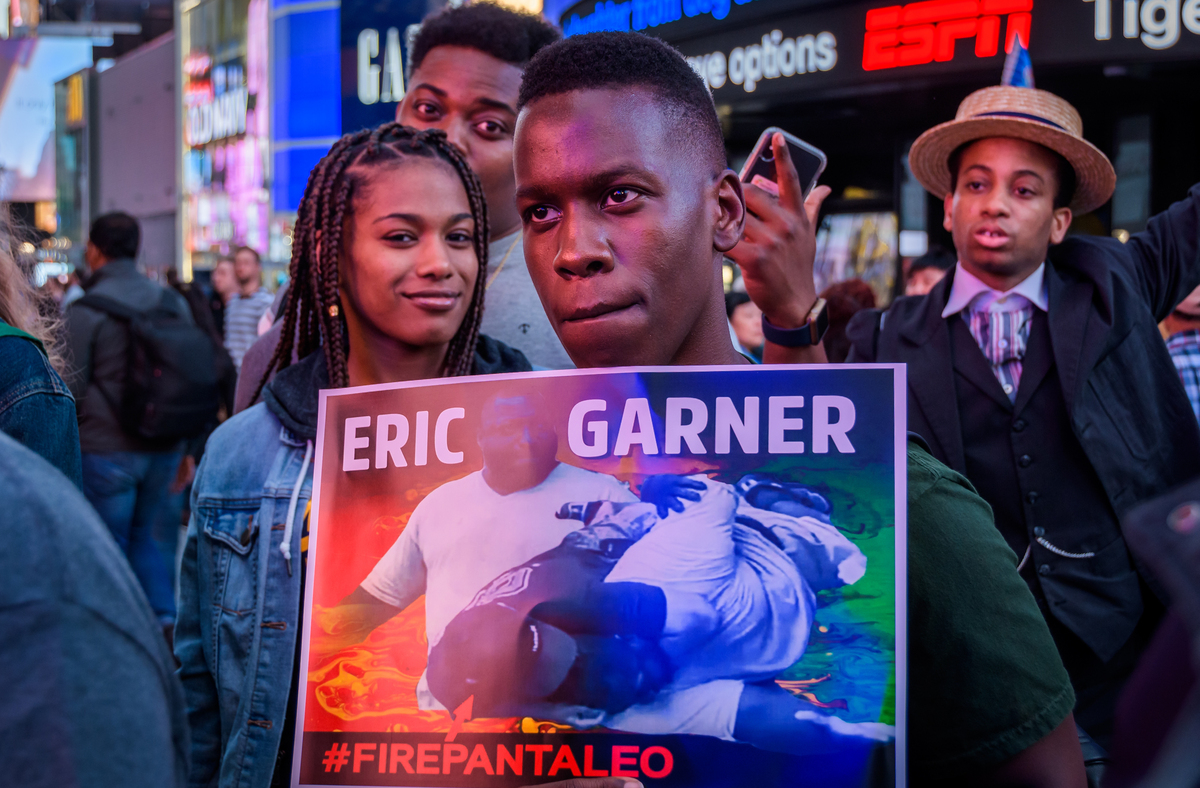 Members of Black Lives Matter of Greater New York and allies hold a protest rally last month in New York City's Times Square demanding justice for Eric Garner, who died after he was put in a chokehold by an NYPD officer in 2014.

The Department of Justice will not bring criminal charges against the New York City police officer involved in the death of Eric Garner, citing insufficient evidence, federal prosecutors announced Tuesday.

"Let me say as clear and unequivocally as I can that Mr. Garner's death was a tragedy," Richard Donoghue, U.S. attorney for the Eastern District of New York, said at a news conference. "But these unassailable facts are separate and distinct from whether federal crime has been committed. And the evidence here does not support charging police Officer Daniel Pantaleo with a federal criminal civil rights violation."

Donoghue said none of the officers involved in Garner's death in 2014 on Staten Island, N.Y., would face charges. That decision, he said, is the result of a years-long and "exhaustive" investigation.

Garner's dying words, "I can't breathe," became a national rallying cry and a flashpoint in the Black Lives Matter movement. Garner was black, and Pantaleo is white.

"Fire him," she said, noting that she has continuously watched footage of her father dying over the past five years.

"This man choked my father outside on the street. Choked him with no remorse," she declared.

She added: "The federal government does not want to prosecute Pantaleo for killing Eric Garner. ... Nobody wants to hold nobody accountable?"

MOMENTS AGO: Daughter of #EricGarner reacts to reports of DOJ not bringing charges against NYPD officer in 2014 chokehold death. More: https://t.co/h0u1d70bGs pic.twitter.com/Pxrt3KinWf

"Today's inaction reflects a DOJ that has turned its back on its fundamental mission — to seek and serve justice," said New York Attorney General Letitia James. "In memory of Eric Garner and all others who have lost their lives unjustly, we will continue to fight for reforms to a criminal justice system that remains broken."

New York City Mayor Bill de Blasio said in a statement: "With the fifth anniversary of the tragic death of Eric Garner less than 24 hours away, federal law enforcement agencies have just announced they will not pursue charges against Officer Pantaleo. Years ago, we put our faith in the federal government to act. We won't make that mistake again."

On July 17, 2014, police officers approached Garner out of suspicion that he was selling untaxed cigarettes on the sidewalk outside a Staten Island convenience store. The encounter was captured on bystander cellphone video, showing officers taking Garner to the ground. Pantaleo applied a chokehold, and Garner later died. The fatal altercation became central in debates about the use of excessive force by police and the treatment of African Americans at the hands of law enforcement.

NYPD policy prohibits use of the chokehold technique. Garner's death was ruled a homicide, though none of the police officers involved has been charged with a crime.

Investigators were not able to establish that Pantaleo willfully used excessive force in his struggle with Garner, Donoghue said.

Pantaleo's initial maneuvers in trying to take Garner to the ground were in line with "established police tactics and procedure," Donoghue said, given that Garner was resisting arrest and significantly larger in size than the officers. He also noted that the situation quickly deteriorated, including when Pantaleo wrapped his left arm around Garner's neck for about 7 seconds.

However, Donoghue said cast doubt on whether the chokehold caused Garner's breathing problems.

"It has been widely reported Mr. Garner stated, 'I can't breathe,' but I would point out that he made this statement only after he fell to the sidewalk and after Officer Pantaleo released his grip from Mr. Garner's neck," Donoghue said.

In declaring the death a homicide, New York City's Office of the Chief Medical Examiner found that Garner's death was caused by "compression of neck (choke hold), compression of chest and prone positioning during physical restraint by police."

Donoghue said top Justice Department officials, including Attorney General William Barr, agreed with the assessment that federal prosecutors did not have enough evidence to bring a criminal case against Pantaleo to a grand jury.

"The law recognizes that police are often forced to make split-second judgment in circumstances that are tense, uncertain and rapidly evolving," Donaghue said.

Federal authorities' announcement Tuesday came up against a legal deadline — there is a 5-year statute of limitations to charge a law enforcement officer when they are accused of committing "serious bodily injury," Donoghue noted.

The Justice Department announcement marks the second time in which Pantaleo has avoided criminal charges in Garner's death. In 2014, a Staten Island grand jury declined to criminally indict him, which de Blasio called "very painful."

A year later, New York City officials agreed to pay nearly $6 million to Garner's family in a settlement to head off a civil lawsuit.

Pantaleo is still facing an internal disciplinary proceeding over whether he should be fired by the NYPD. The department had postponed the move out of deference to the Justice Department inquiry and said last summer that it planned to move ahead with its own proceedings in early September.

Since Garner's death almost five years ago, Pantaleo has been on desk duty in the New York Police Department.