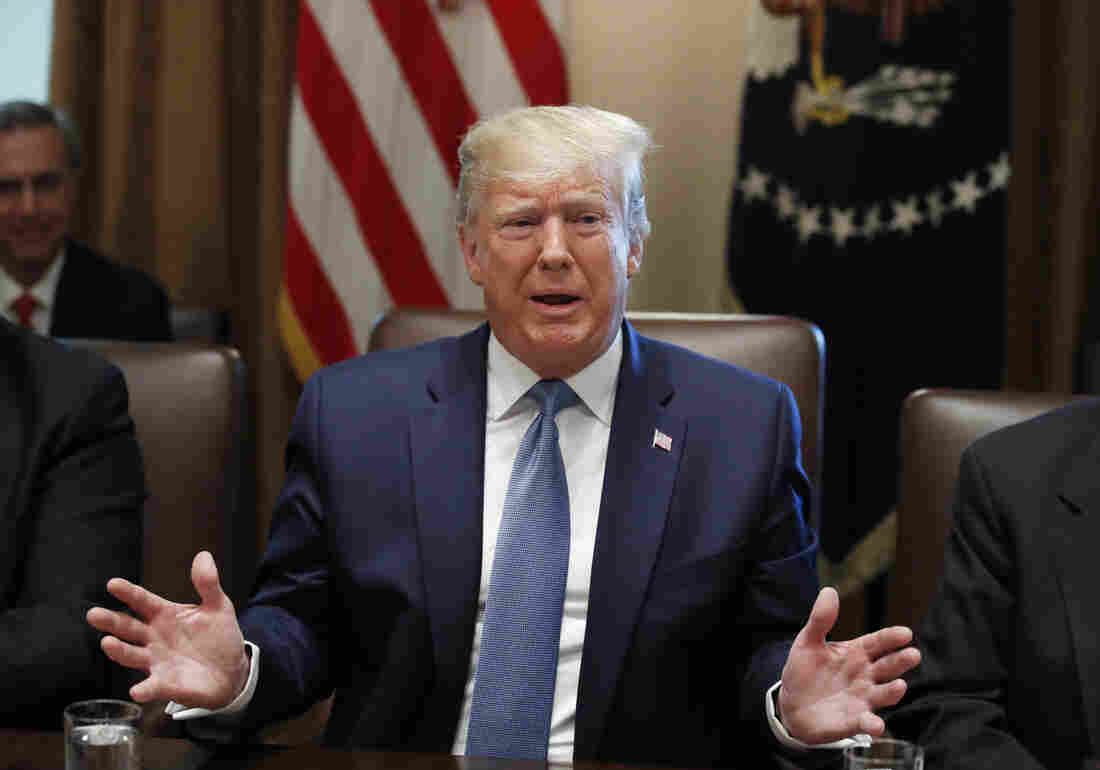 During a Cabinet meeting on Tuesday, President Trump again criticized a group of four House Democrats for their comments about his policies. He continued the back-and-forth ahead of a House vote condemning his tweets. Alex Brandon/AP hide caption 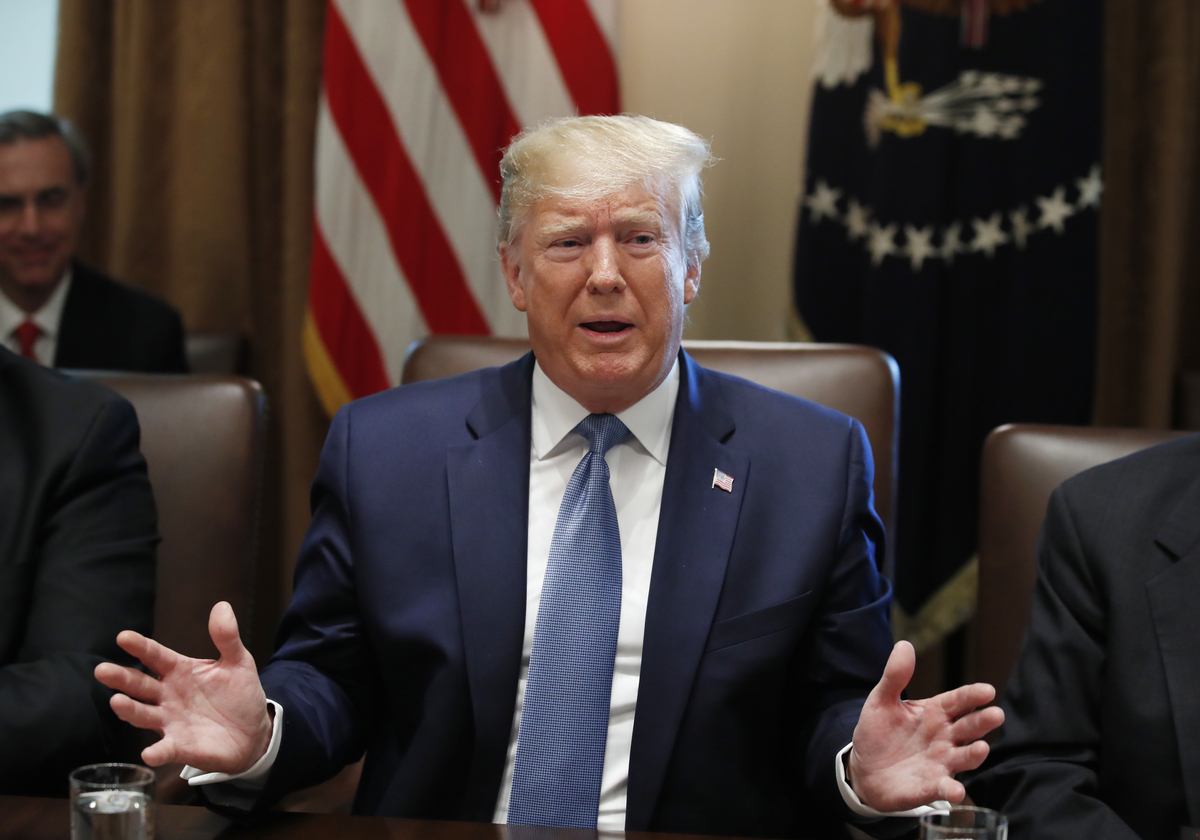 During a Cabinet meeting on Tuesday, President Trump again criticized a group of four House Democrats for their comments about his policies. He continued the back-and-forth ahead of a House vote condemning his tweets.

The House of Representatives approved a resolution Tuesday evening condemning the president for a series of racist tweets about four Democratic lawmakers.

The vote was mostly along party lines, as the House split 240-187, with four Republicans supporting the nonbinding measure.

Republican Reps. Fred Upton of Michigan, Brian Fitzpatrick of Pennsylvania, Susan Brooks of Indiana and Will Hurd of Texas joined with Democrats to rebuke the president, as did Michigan Rep. Justin Amash, who recently left the Republican Party to become an independent.

The House was paralyzed for a substantial portion of the afternoon over legislative procedure. Republicans sought a ruling on the question: Does calling the president's tweets "racist" violate the rules of decorum established in the House?

At issue was the phrasing of Pelosi as she spoke in favor of the resolution.

"Every single member of this institution, Democratic and Republican, should join us in condemning the president's racist tweets," she said. "To do anything less would be a shocking rejection of our values and a shameful abdication of our oath of office to protect the American people."

GOP Rep. Doug Collins, the top Republican on the House Judiciary Committee, objected to the language, calling it "unparliamentary," and called for her comments to be "taken down" — officially removed from the record. When that happens, the lawmaker is no longer allowed to speak on the House floor for the remainder of the day.

House rules prohibit impugning the motives of a person during legislative debate. There is no explicit rule that states that lawmakers cannot call comments "racist," but there is precedent for declaring these sorts of characterizations out of bounds. The rules and precedents are outlined in Jefferson's Manual, which lays out parliamentary procedures.

As House staff and lawmakers huddled to sort out what to do and expected a decision, the presiding chair of the House, Rep. Emanuel Cleaver, D-Mo., unexpectedly dropped his gavel and declared that he was "abandoning the chair."

Majority Leader Steny Hoyer later delivered the ruling that Pelosi's words were not in order, but Democrats defeated a vote to strike them from the official congressional record.

Both the attempted sanctioning of the speaker of the House and Cleaver's decision to walk off the floor and leave the House without a presiding officer are highly unusual developments in the House.

The resolution states that the House "strongly condemns President Donald Trump's racist comments that have legitimized and increased fear and hatred of new Americans and people of color."

The president's weekend comments about four female members of Congress have done what Trump's remarks so often do: take control of the agenda in Washington, D.C.

As the weekend began, lawmakers expected that this week would be focused primarily on issues like a proposal to raise the minimum wage, a budget deal and a vote holding the attorney general in contempt over the 2020 census.

The president's tweets upended the whole order. His tweets, in which he implored four women of color to "go back" to the "places from which they came," dominated the conversation in the capital — with Democrats condemning it and Republicans being asked to defend or denounce it.

The statements targeted four freshman progressive lawmakers: Reps. Alexandria Ocasio-Cortez of New York, Ilhan Omar of Minnesota, Rashida Tlaib of Michigan and Ayanna Pressley of Massachusetts. All but Omar were born in the United States.

In response to the president's comments, Ocasio-Cortez responded that telling "four American Congresswomen of color" to " 'go back to your own country' " reflects the "hallmark language of white supremacists."

Ahead of the debate on the House floor, Democrats were warned to watch their language.

In a meeting with his Democratic colleagues Tuesday morning, Rules Committee Chairman Jim McGovern, D-Mass., reminded lawmakers about the House rules saying they cannot impugn the personal motives of the president. Pelosi suggested to the caucus that they could use phrasing like his "words were racist," noting that such nuance allows them to make their point and stick within the rules.

Asked if the president's tweets were racist, House Minority Leader Kevin McCarthy said on Tuesday that they weren't. He added that he planned to vote against the Democratic resolution, dismissing it as "it's all politics."

"Our opposition to our colleague's beliefs has absolutely nothing to do with race or gender or religion," she told reporters. "We oppose them and their policies because their policies are dangerous and wrong and would destroy America."