Accessibility links
Trump Officials Face Cover-Up Allegations After Failed Push For Census Question Challengers of the Trump administration's push for a census citizenship question are asking a federal judge in New York to impose penalties for allegedly false or misleading statements by officials. 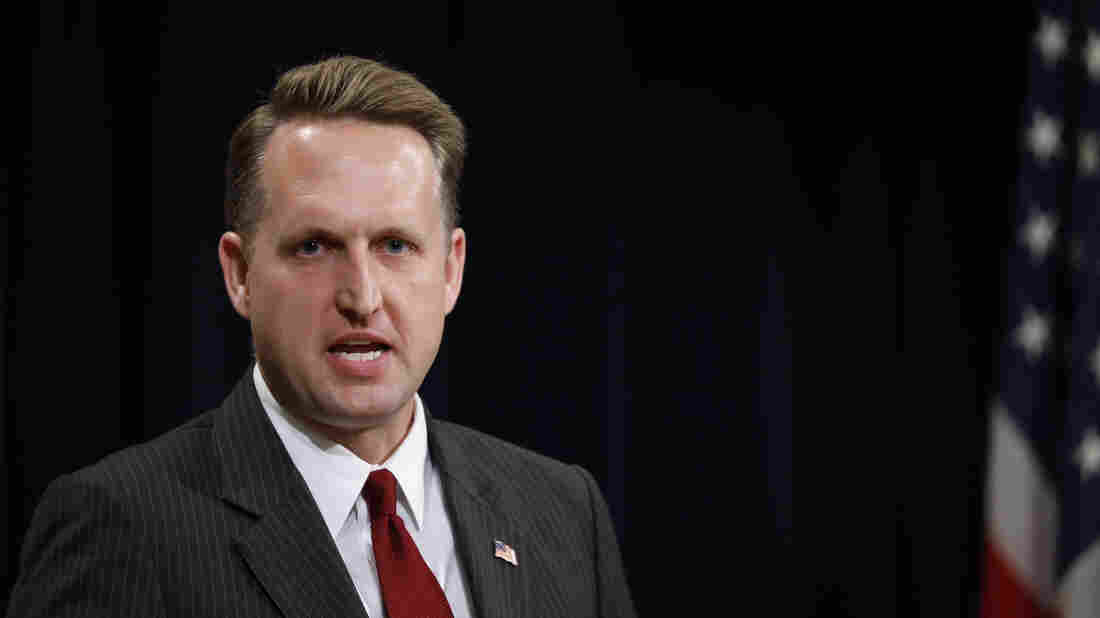 Former acting Assistant Attorney General for Civil Rights John Gore speaks at the Justice Department in 2018 in Washington, D.C. Gore and other Trump administration officials are accused of providing false or misleading statements about the origins of a citizenship question they tried to get on the 2020 census. Aaron P. Bernstein/Getty Images hide caption 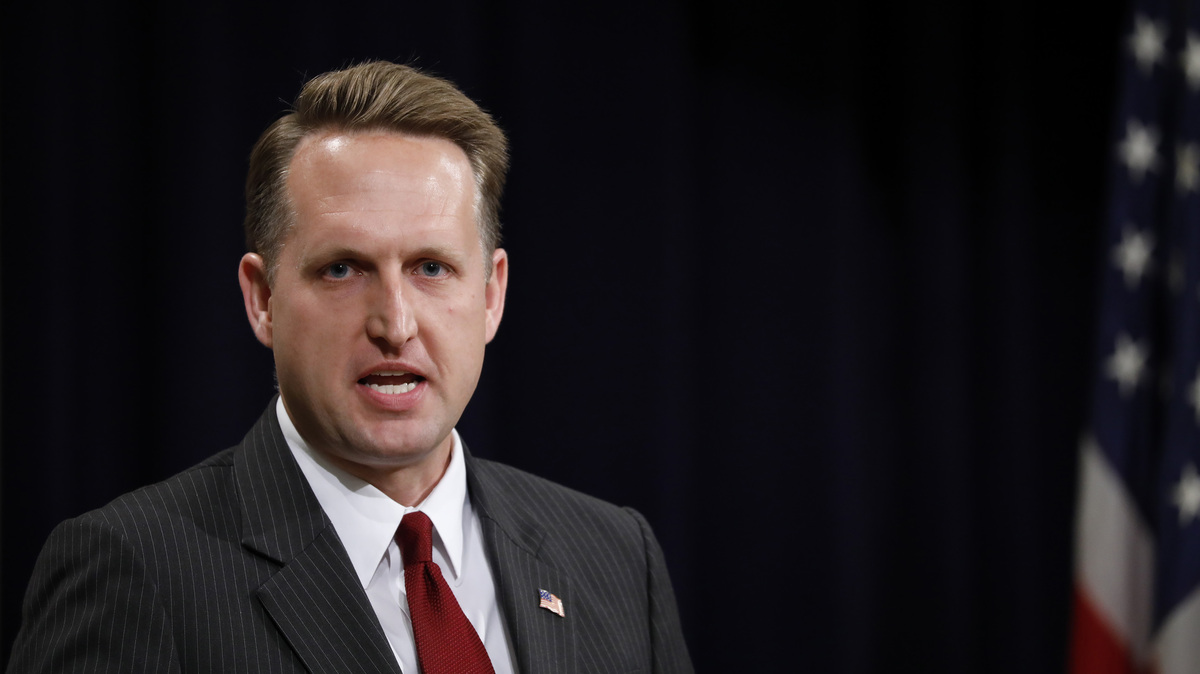 Former acting Assistant Attorney General for Civil Rights John Gore speaks at the Justice Department in 2018 in Washington, D.C. Gore and other Trump administration officials are accused of providing false or misleading statements about the origins of a citizenship question they tried to get on the 2020 census.

Days after President Trump announced he's no longer pushing for a citizenship question on the 2020 census, officials in his administration are now facing allegations of covering up the question's origins.

Challengers of the question filed a formal request Tuesday for U.S. District Judge Jesse Furman of New York to consider imposing penalties on the Trump administration for allegedly providing false or misleading statements as part of the multiple lawsuits over the question, which was originally approved by Commerce Secretary Wilbur Ross.

Administration officials allegedly engaged in conduct that is "nothing less than a fraud on the Court," plaintiffs' attorneys with the ACLU, New York Civil Liberties Union and Arnold & Porter argue.

"Through the use of false or misleading testimony, they obscured evidence suggesting that the true purpose of Secretary Ross's decision to add a citizenship question to the 2020 Census — suppressing the political power of minority immigrant communities," the lawyers argue.

They also note, however, that "the misconduct appears to have been perpetrated by senior Commerce and [Justice Department] officials — not the career DOJ attorneys who litigated this case."

Last week, the Justice Department asked to switch out every single career DOJ attorney who had been working on the lawsuits for months. Furman denied the request, which did not provide any explanation for the change as required by a local court rule.

In their motion for sanctions, the plaintiffs are asking Furman to order the Trump administration to pay their attorney's fees as well as other monetary penalties. They are also requesting more releases of internal documents and questioning under oath of administration officials in order "to clarify the roles of specific senior government personnel," including Ross, former Attorney General Jeff Sessions and GOP redistricting strategist Thomas Hofeller.

A spokesperson for the Justice Department, Kelly Laco, said the department — which is representing the administration in these lawsuits — declined to comment.

In a written statement, A. Mark Neuman — a former adviser to Ross accused of providing false testimony and withholding evidence — rejected the allegations.

"I have a consistent 30 year record of relentless focus on effective strategy and operations to count the 'hardest to count populations', including and especially Latino immigrant communities," Neuman wrote in an email. "My own mother was a Spanish-speaking immigrant to the United States. The idea that I would work to undermine the interests of my own community is an outrageous falsehood."

Attorneys for plaintiffs in one of the New York-based cases first raised claims of a cover-up in late May shortly after they uncovered documents from Hofeller's hard drives after he died last August. In an unpublished study, Hofeller concluded that adding a question about U.S. citizenship status to the census would produce the data needed to give Republicans and non-Hispanic white people a political advantage when new voting districts are drawn after the 2020 census.

Another file found among Hofeller's documents contains a paragraph that matches word for word with a part of a letter that Justice Department official John Gore has identified as an early draft of the administration's formal request for a citizenship question. The paragraph justifies the question's addition with the Voting Rights Act.

Better protection of the voting rights of racial minorities was the administration's original stated reason for the question, but President Trump did not mention it at all in the executive order he released last week explaining why he thinks citizenship information is important.

"I understand that some State officials are interested in such data for districting purposes," Trump wrote. "This order will assist the [Commerce] Department in securing the most accurate and complete citizenship data so that it can respond to such requests from the States."

After almost two weeks of uncertainty in the Trump administration's strategy following the Supreme Court's decision in late June to keep the citizenship question blocked, Trump announced last week that his administration is relying instead on the Census Bureau's original recommendation — compiling existing citizenship records from the Social Security Administration, the Department of Homeland Security and other federal agencies.

Earlier Tuesday, Furman signed an order that permanently blocks the administration from adding a citizenship question to forms for next year's head count. U.S. District Judge George Hazel is considering approving a similar order proposed by both the administration and plaintiffs in the Maryland-based lawsuits.

Furman had previously decided to delay reviewing the cover-up claims to avoid interfering with the Supreme Court, which had not ruled yet on the issue. Still, during a hearing in June, Furman called the plaintiffs' allegations "serious."

The move by the plaintiffs comes as the House of Representatives prepares for an expected vote on Wednesday to hold Ross and U.S. Attorney General William Barr in contempt for refusing to provide full copies of emails as part of the House Oversight and Reform Committee's ongoing investigation into the citizenship question. The president has claimed executive privilege over the requested documents.

In the meantime, the Census Bureau is continuing its final preparations for the constitutionally mandated head count of every person living in the U.S. The census is set to officially begin in January in rural Alaska before rolling out to the rest of the country in March. The numbers will be used to determine how congressional seats, Electoral College votes and federal funding are distributed among the states for the next decade.

Throughout the controversy over the citizenship question, the bureau has been been under pressure to meet critical milestones, including the printing of paper forms, amidst the legal uncertainty. But at a hearing before the Senate Homeland Security and Governmental Affairs Committee on Tuesday, Census Bureau Director Steven Dillingham tried to look on the bright side.

"I think we're well positioned at this point. We have a definite path forward," Dillingham said. "Some people would speculate that even the attention that may be considered attention of disagreements on the census could, in fact, become beneficial because people know now that the census is very important."

Other census advocates, however, worry that the attention on the failed citizenship question push has heightened fears about the count, especially among immigrant communities who may be more likely now to stay away.