Accessibility links
Your Local Library May Have A New Offering In Stock: A Resident Social Worker Libraries have never been just about books; they're also crucial hubs of community support. Some are even expanding that role, and supporting their librarians, by bringing in trained social workers. 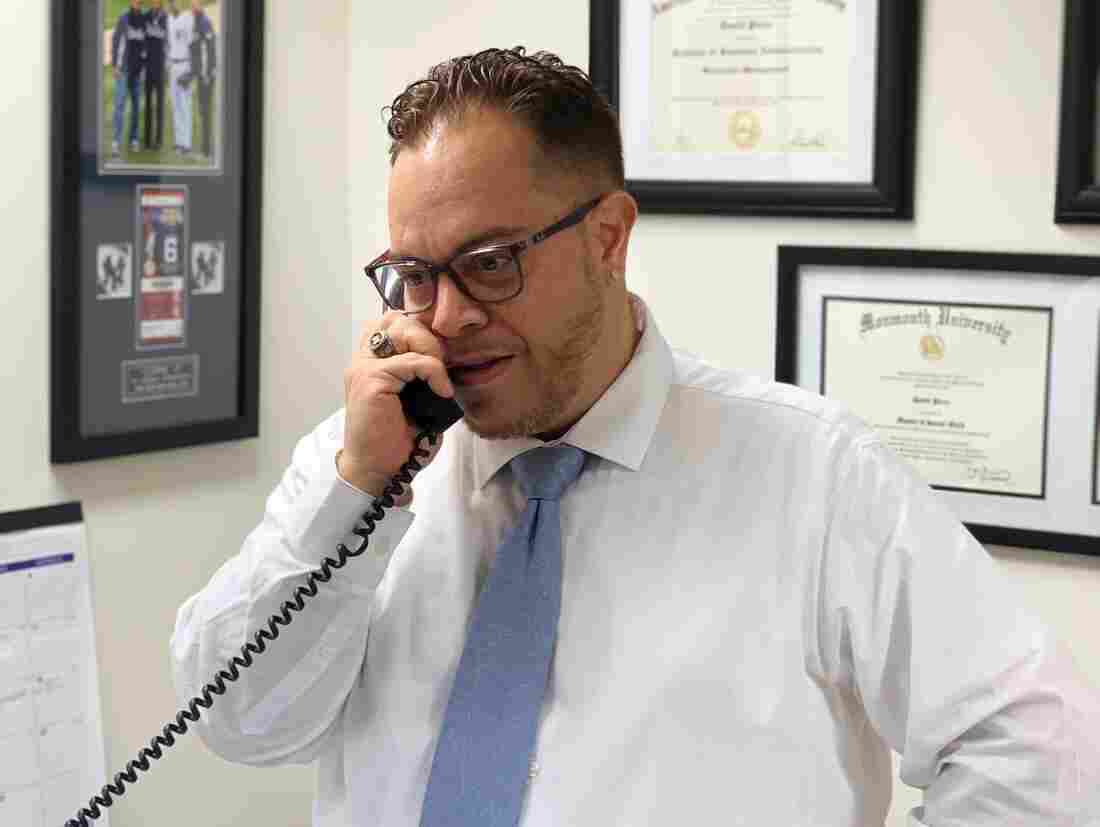 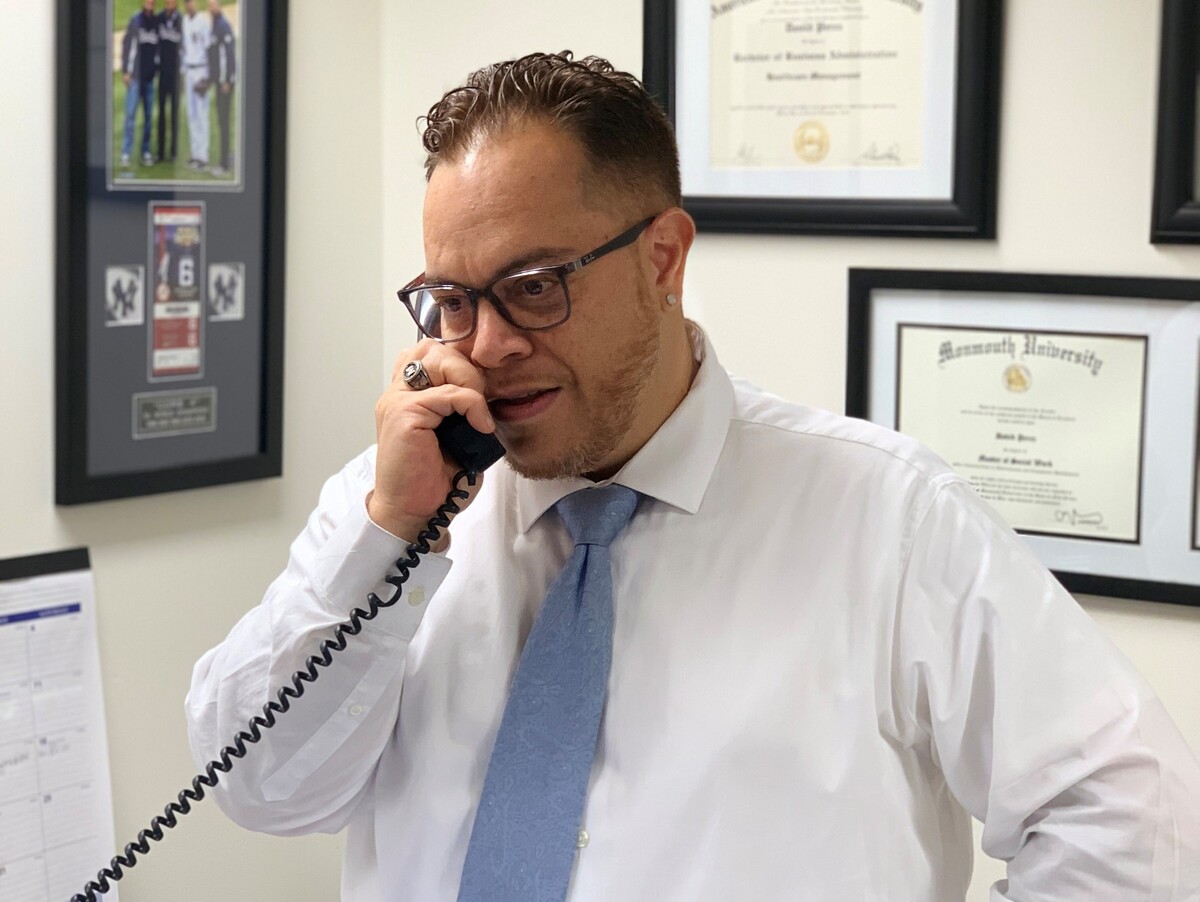 David Perez takes a call earlier this year in his office at the Long Branch Free Public Library. The U.S. Army veteran says he was surprised when his school advisers suggested he work there — but after several years in the job, he says it makes perfect sense.

Trish doesn't have many places to turn. She's living at her elderly father's home without a job because she can't afford the care he needs. And every day she says the balance sheet seems stained with more red ink.

"It's all outgoing. There's nothing coming in, that's for sure. And I'm stuck in a rock and a hard place because of my credit, so I don't — I need to make enough money that I can afford to live somewhere," she says, voice quavering.

Across from her at the table, David Perez nods quietly and takes notes.

"I am just really drained. I am," she hesitates half a beat, before finishing plaintively: "I am absolutely miserable. I want a job."

As difficult as her situation is, Trish — who asked that we just use her first name — is far from alone. Lots of social workers see cases such as hers come through their offices.

What is unusual is where you'll find this office: the Long Branch Free Public Library in eastern New Jersey. Perez says he's the only social worker in the state employed permanently by a public library.

It's not exactly something he had planned on. A U.S. Army veteran who bounced from job to job after the service, before finally settling on the social work program at Monmouth University, he was surprised when his advisers suggested he intern at the local library.

"That really threw me off," he laughs, in a separate conversation with NPR the same day as his meeting with Trish, "because I'm saying to myself, 'Um, my resume says military. It says health care business. This is a school of social work.' And then I'm being advised to go to the Long Branch public library. I just didn't get it."

He does now, though.

"Anyone can come right in here, and you don't need to be of any class, you don't need money," he explains. "You can take advantage of all of the services that we offer."

Those manifold services include teaching tech courses, giving career counseling, and caring for people experiencing homelessness. More than half a million people in the U.S. were without a home on a single night last year, according to federal estimates, and the rate of homelessness nationally has ticked upward the past two years.

Perez's library can even treat drug overdoses. It stocks two doses of Narcan, an anti-overdose drug, behind its circulation desk to deal with the effects of the opioid epidemic, much like thousands of public libraries across the U.S.

Libraries have always had far more on their plate than the stereotype of the silence-obsessed introvert who cares only for reordering the fiction section.

Amanda Oliver confronted that disparity head-on after graduating with her library science degree.

"I mean nothing — nothing! — I learned in my master's program did I put to use on a daily basis," the young librarian says.

She spent several years working with public schools in the Washington, D.C., area before getting a job at a downtown branch of the city's public library system. There, she says she saw drug deals in the aisles and overdoses in the bathrooms, had scary encounters with some patrons and generally felt unequipped to deal with the day-to-day realities of life as an urban librarian.

There was a panic button under the circulation desk, installed there to alert the police in case of trouble, and she says her colleagues pressed it during an altercation with a patron her first week at the branch. The patron left before the police arrived, she says, but it was her colleagues' reaction afterward that shocked her.

"Everyone was completely unfazed on staff," she says. " And so it clicked in my brain: 'Oh, this is not uncommon.' "

It wasn't and she eventually quit. She wrote of her experiences in the Los Angeles Times, and she's planning to expand on those thoughts in a book.

"None of this is to say that there weren't really wonderful moments and parts of the work that I absolutely love and value," she adds, "but the toll that it started to take on my mental health was just not worth it." 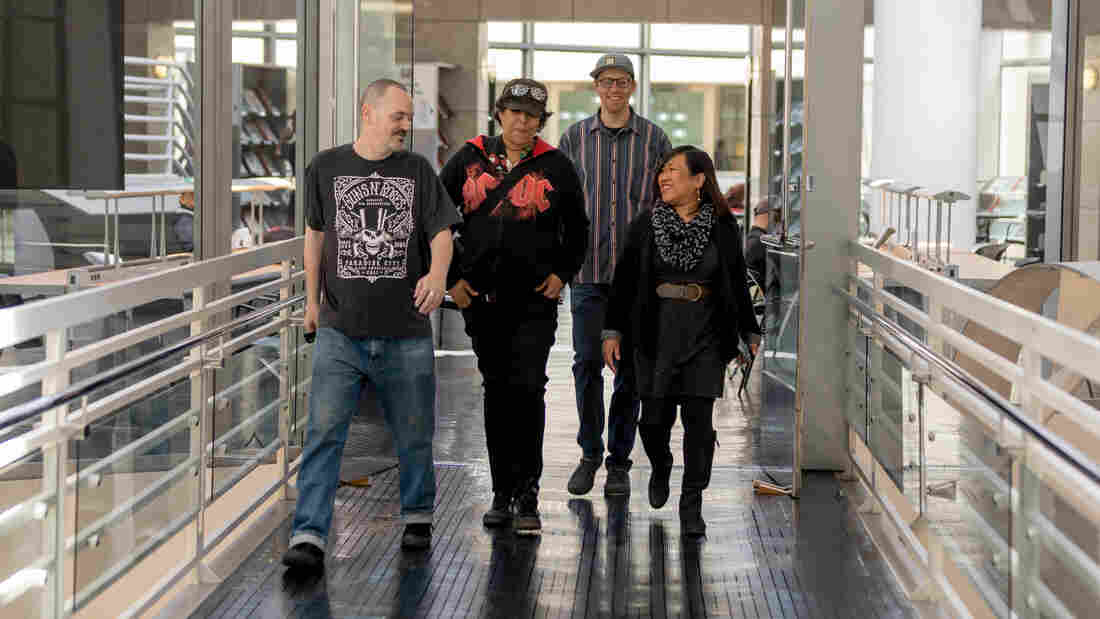 Leah Esguerra (right), who is credited with being the first social worker installed directly at a public library, strolls through the fifth floor of the San Francisco Public Library's main branch, joined by the library's health and safety associates (from left to right) Sidney Grindstaff, Jennifer Keys and Cary Latham. Jason Doiy/Courtesy of the San Francisco Public Library hide caption 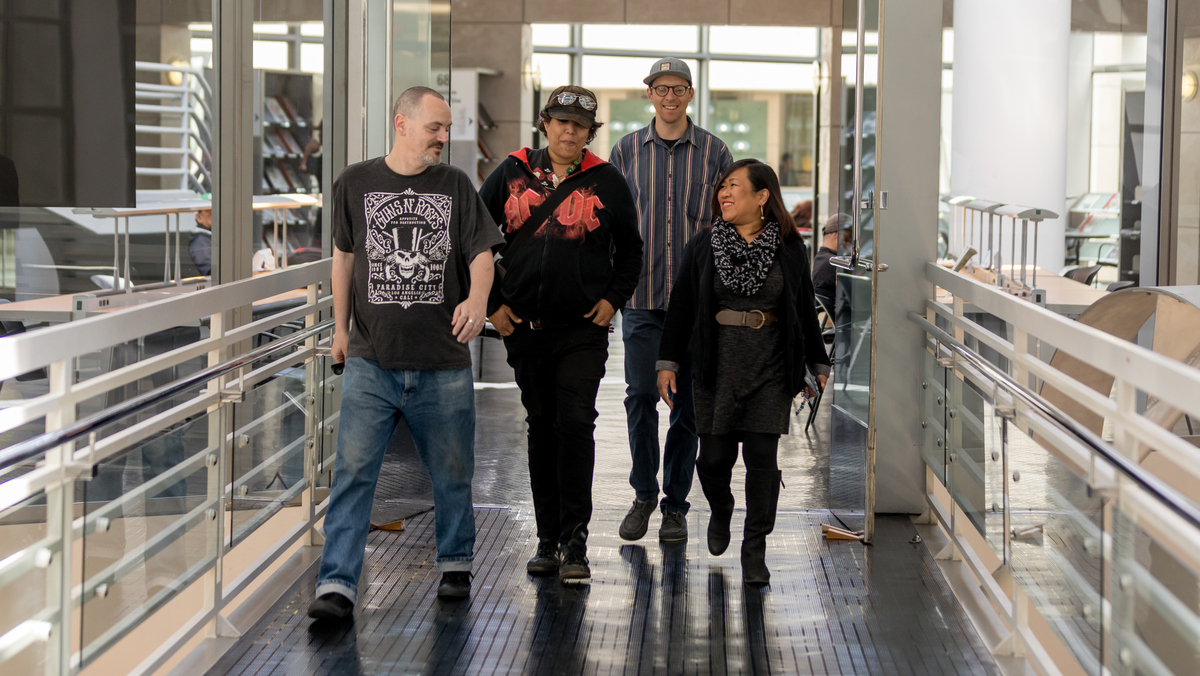 Leah Esguerra (right), who is credited with being the first social worker installed directly at a public library, strolls through the fifth floor of the San Francisco Public Library's main branch, joined by the library's health and safety associates (from left to right) Sidney Grindstaff, Jennifer Keys and Cary Latham.

"There was no blueprint"

Libraries have been trying to ease this stress with training for staff or outside partnerships. Over the past decade, library science programs have also been steadily shifting their focus to teach more community outreach, according to Noah Lenstra, a professor at the University of North Carolina, Greensboro.

Still, he acknowledges, "of course some people won't have had these classes because they got their degrees 10 or even five years ago."

So, these days some libraries across the country are trying the approach used in Long Branch, N.J., to support librarians tasked with social work for which they weren't formally trained: bring in a social worker who was formally trained for situations such as these. The San Francisco Public Library is credited with being the first to do so, with Leah Esguerra back in 2009.

For Remote Communities In Scotland's Outer Hebrides, Mobile Libraries Are A Lifeline

"There was no blueprint," she recalls. "The public library is not a traditional setting for a social worker, so there was a lot of conversation at the start."

And since she started, she says the position has evolved in "many ways I had never imagined."

She has developed systems to connect patrons with mental health services, help them find jobs, get them legal support — and the San Francisco Public Library says she has helped find permanent housing for scores of people.

"I walk around and try to talk to people who might be experiencing homelessness. We never ask them directly, but I would just come up to them and say, 'I don't know if you're aware there's a social worker and there are social services here,' " she says. "Because of my role as a professional, clinical social worker, I can do assessments and determine if I need to provide extra support by linking them with community services such as clinics or mental health or for them to see a doctor."

About three dozen public libraries across the U.S. have followed San Francisco's lead in the decade since Esguerra was brought on, including those in Denver, Georgetown, Texas, and Perez's library in Long Branch, N.J. And that number only has only accelerated in recent years.

"Using the word exponential is really not an exaggeration," says Sara Zettervall of Whole Person Librarianship, an organization dedicated to tracking such social work partnerships and instructing libraries on how to carry them out.

So many have expressed interest in pursuing this route, the Public Library Association started a task force meant to "develop and recommend a strategic and coordinated approach" for libraries trying to better address the social service needs of their patrons. Esguerra co-chairs the group, of which Perez is also a member.

Now, this approach isn't perfect. Oliver, for instance, says the D.C. public library system had a social worker when she was working there. But, according to her, one just wasn't enough to offer all of the support needed for the city's 28 branches.

But Esguerra says the idea of bringing social workers into libraries isn't just meant to help librarians; it encourages people in need to take advantage of the services the library-based social workers offer.

"Coming to the library is not attached with any stigma, unlike coming to, like, you know, other traditional settings," she explains. "So public libraries really are the best places to reach out to the population and be effective at it."

"We're going to connect the dots"

Back in Long Branch, N.J., David Perez is wrapping up his meeting with Trish. She's still got to get to the circulation desk to check out the usual stack of DVDs she picks up for her ailing father.

But before she goes, Perez goes through his notes of their conversation. He confirms some calls to potential employers and offers a word of support.

"Financially you were saying how everything is outgoing. But it's also emotionally — financially, emotionally, it's all going out and you need something to come back in," he says to her. "That's what I'm here for — to help in any way possible."

He promises to call her in a day or two.

"We're going to connect the dots. I have a laptop, I have a printer, I have a phone, a fax. I have coffee if you want some coffee," he adds, laughing. "And together we make it happen. That's what we're doing here."