Accessibility links
Three Teens Used A Podcast To Put Pressure On A Waste Management Facility An energy company announced a proposal to build a waste management facility next to a school. So these three students turned to podcasting to get to the bottom of what was happening.

Listen · 8:10 8:10
These Teens Started Podcasting As A Hobby, Then It Turned Into Serious Journalism 8:10 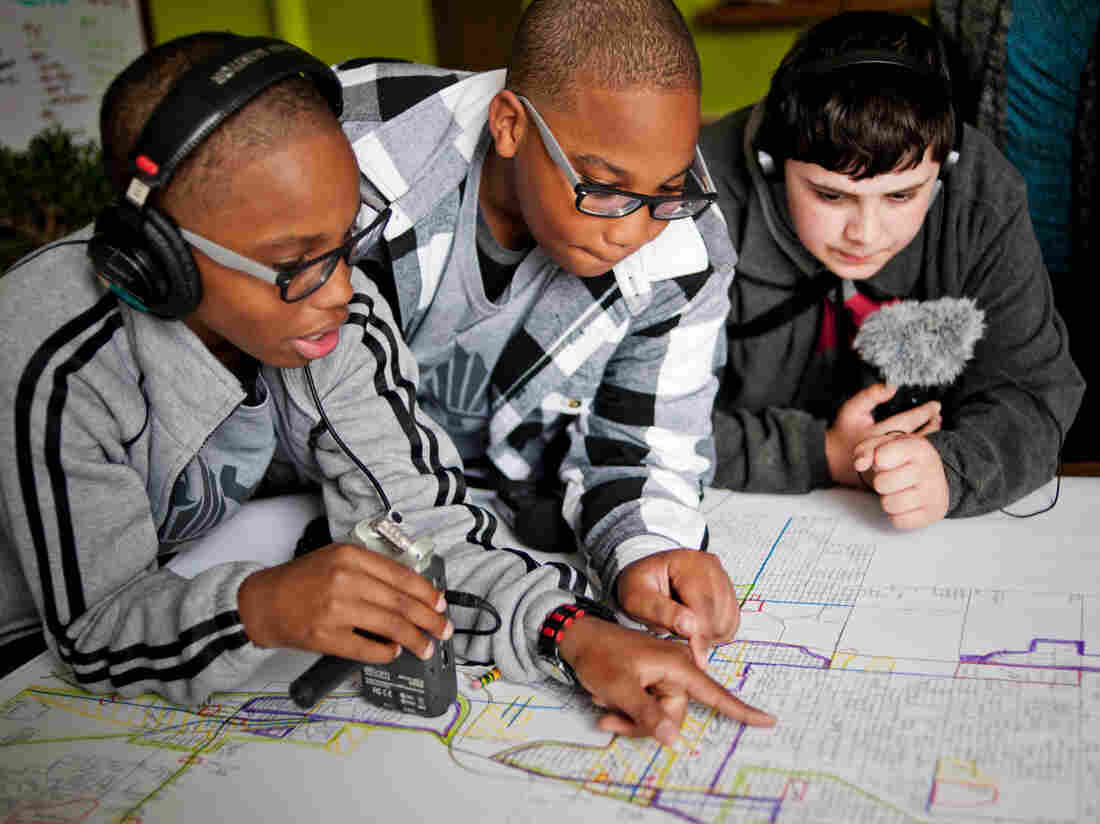 From left, students Erin Addison, Evan Addison and Andrew Arevalo of the Steel City Academy look over a planning map of Gary, Ind.

Twin brothers Erin and Evan Addison had never heard a podcast before joining the podcasting club at their school. And they managed to convince their best friend, Andrew Arevalo, to join as well.

"We were just looking for a hobby and Erin was like, 'Hey, you know we could do podcasting — it will be fun,' " Arevalo says.

That was two years ago, when the three boys were in seventh grade at Steel City Academy, a charter school in Gary, Ind. But in March of 2018, their reporting took a serious turn. Students learned about a proposal to build a waste management facility next to their school — and they weren't happy about it.

They started interviewing classmates and teachers. They learned how to submit a Freedom of Information Act (FOIA) request. They also attended informational meetings and peppered representatives from Maya Energy, the company behind the plant, with questions — their recorders rolling, of course.

At one protest outside a Gary City Council meeting, about 150 students showed up to demand that the council reject the proposal. Student Malik Hubbard told Erin, "I really want Steel City to stay here. And that dump gotta go somewhere else."

Maya Energy disputes the use of the term "dump" to describe the facility and claims that the project will create as many as 124 full-time jobs. In a statement to NPR, Maya Energy also writes: "The Maya Facility will recycle about 90% of the incoming waste and will divert the waste from it going to landfill, resulting in a positive environmental impact: reduction in greenhouse gas!"

Brothers Evan and Erin Addison. "I was always told to stay in a child's place," Evan says. "But now I know there are times where you have to tell people that they're wrong." Shuran Huang/NPR hide caption

But school administrators, teachers and other students were not convinced by Maya Energy's statements. In interviews the boys conducted, many people were worried about noise and air quality. The company says it won't burn anything at the facility, but hundreds of trucks a day could be needed to bring all the waste into the facility.

"It's exhibit A for environmental injustice," says Kim Ferraro, senior staff attorney at the Hoosier Environmental Council, a nonprofit environmental group in Indiana that has opposed the facility. "You have well-resourced industries that have political connections and the ability to run roughshod over existing communities that don't have the resources to fight back." (More than a third of residents live below the poverty line in Gary.)

Initially, all of the student activism seemed to have an impact. In October of last year, citing the concerns of Steel City Academy students, the Gary City Council voted 8-0 to reverse their earlier zoning approval for the Maya Energy project. Steel City Academy students were elated. One student activist, Danielle Sipp, told the Steel City Podcast, "People say young people can't accomplish but yeah, we can do these things if we put our minds together and act as a unit."

But Maya sued the council in February and Gary City Council reversed back, clearing the way for Maya to build the plant. In March, the state's Department of Environmental Management awarded Maya its solid waste permit.

Still, podcaster Erin Addison told NPR's Audie Cornish the experience hasn't diminished his pride in his city. "I've seen Gary for all of what it is. With the good and bad you take it all together, and you'd get so much more good than you get bad. And I just love Gary, honestly."

The boys all say the reporting has also increased their pride in themselves and shown them how much power they have. "I was always told to stay in a child's place," Evan says. "But now I know there are times where you have to tell people that they're wrong."

"We are definitely going to keep on the story," Erin Addison adds. Evan and Andrew agree: The reporting will continue.