In the PBS program Molly of Denali, Alaska Native Molly Mabray helps her mom run a trading post in an Alaskan village.

There was Disney's Pocahontas, which presented the daughter of a Powhatan chief in a romantic love story with Captain John Smith. Crystal Echo Hawk, CEO of the media watchdog group IllumiNative, says it was a false narrative about a girl who in reality was "taken by force and sexually assaulted."

There was Tiger Lily in the classic film Peter Pan, the princess of the "Piccaninny" tribe who smoked a peace pipe and spoke in one-syllable gibberish. The same went for the various "injuns" in old Bugs Bunny cartoons.

More recently, Disney and Pixar got kudos for more authentic representations of Native people in the films Moana and Coco. Now, TV networks and streaming services are reaching children with realistic portrayals on the small screen — where they consume most of their media.

The new PBS show Molly of Denali is the first nationally distributed children's series to feature an Alaska Native lead character. She's 10 years old; her heritage is Gwich'in, Koyukon and Dena'ina Athabascan. She lives in the fictional village of Qyah, population 94. She goes fishing and hunting, and also looks up information on the Internet and on her smartphone.

"Molly is computer-savvy," says the show's creative producer, Princess Daazhraii Johnson. "I think it's really important for us to show that, because we are modern, living people that are not relegated to the past. That stereotype, that romanticized notion of who we are as Native people, is rampant."

Johnson says when she travels, she still meets people who assume all Alaskans live in igloos and are Eskimos — "which isn't a term that people really even use anymore up here," she says. "We have 229 federally recognized tribes in Alaska; we have 20 officially recognized Alaska Native languages here. We are so diverse and dynamic. And that's something else that we're going to be able to share out to the world."

In one episode, Molly learns that her grandfather stopped drumming and singing as a child when he was taken away to a Bureau of Indian Affairs boarding school. "At the school we weren't allowed to sing the songs from our people," an elder tells her. "We were made to feel bad about who we were."

Johnson says this storyline really happened to one of the elders on the show's advisory board. It's a kid's show, so it has a happy ending: Molly and her grandfather sing together.

"We're just over the moon about Molly of Denali, because this is exactly the type of thing that can really began to shift perceptions in this country," Echo Hawk says.

Echo Hawk says that for years, Hollywood didn't produce stories about or by Native people because it didn't think a market existed for them. But that, she says, was shortsighted. Her organization polled more than 13,000 Americans, and found that nearly 80% of them said they want to learn more about Native peoples.

For several decades, the Australian and Canadian Broadcasting Corporations have spotlighted shows by and about their indigenous populations. Now, Netflix is partnering with three Indigenous cultural organizations to develop the next generation of First Nation creators across Canada. 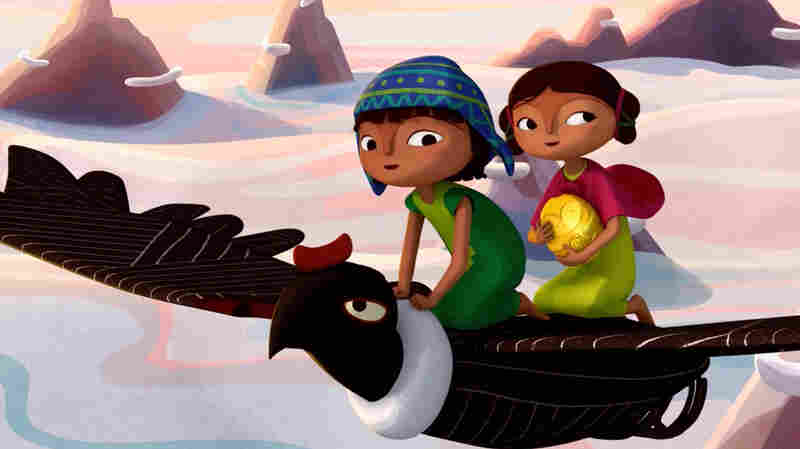 In the Netflix film Pachamama, set in the Andes during the time of Spanish conquest, 10-year-old Tepulpai and his friend Naira go on a journey to retrieve their village's treasured statue. Netflix hide caption 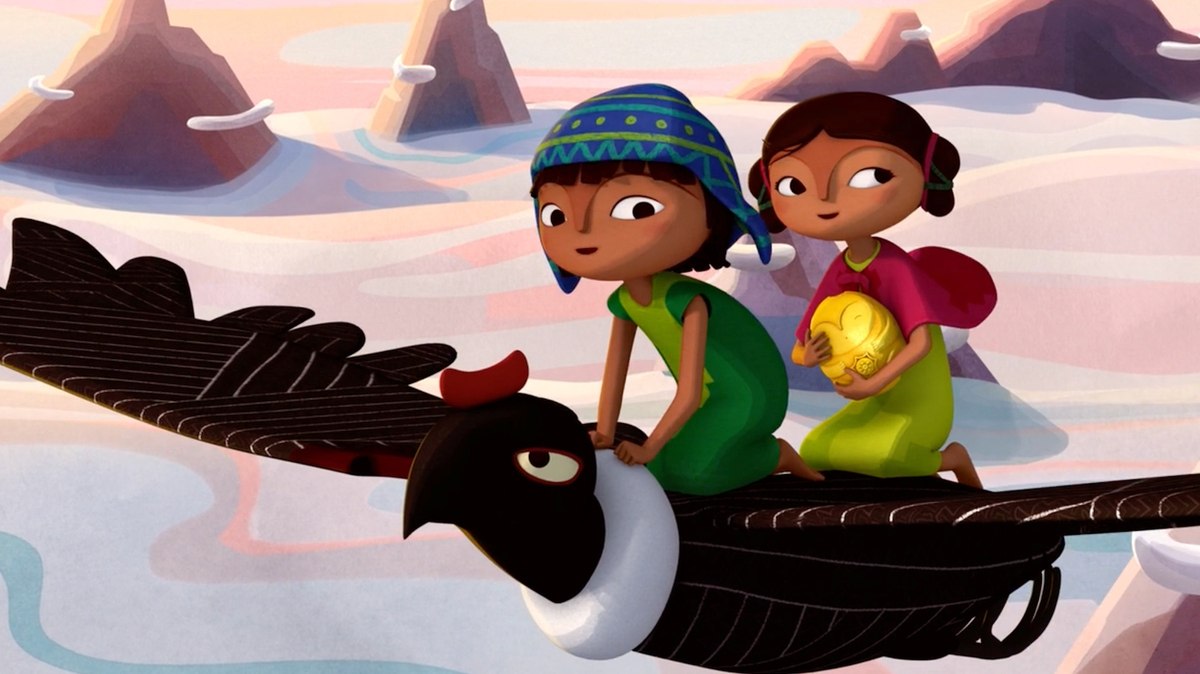 In the Netflix film Pachamama, set in the Andes during the time of Spanish conquest, 10-year-old Tepulpai and his friend Naira go on a journey to retrieve their village's treasured statue.

And in the U.S. and in Latin America, Netflix is running the animated film Pachamama. The story centers on a 10-year-old boy in an Andean village who dreams of becoming a shaman. His people suffer under both the Spanish conquest and the Incan Empire.

"It's told from the point of view of the Indigenous people," says Juan Antin, who wrote and directed the film. He says he wanted to give a realistic view of domination in the region.

Antin, who is from Argentina, says he was inspired by his travels with his anthropologist wife in Bolivia and Peru. "There, I fell in love with the culture of Pachamama, which is how the indigenous people call Mother Earth, having respect, love to the Earth," he says.

The Cartoon Network series Victor and Valentino features two half-brothers in a fictitious Mesoamerican village, exploring myths that come to life. For example, they follow the dog Achi into the land of the dead, where they encounter a chupacabra and other legends.

Animator Diego Molano, whose heritage is Mexican, Colombian and Cuban, began drawing his characters in college before writing for cartoons like The Powerpuff Girls. He says with his new series, he wanted to share the folk tales his grandfather used to tell him.

"I love the myths, but sometimes the myths are not kid-friendly," Molano says. "So I kind of use what I like about them and kind of make a story that is relatable."

Molano says it's about time networks began showing cartoons with Indigenous characters and themes. He just hopes it's not just a fad.