Accessibility links
Eric Garner Death: 5 Years Later, Activists Still Fighting "There's not one day that goes by I don't think about Eric Garner," said activist Nupol Kiazolu. "All we're doing is fighting for equity and another day to live." 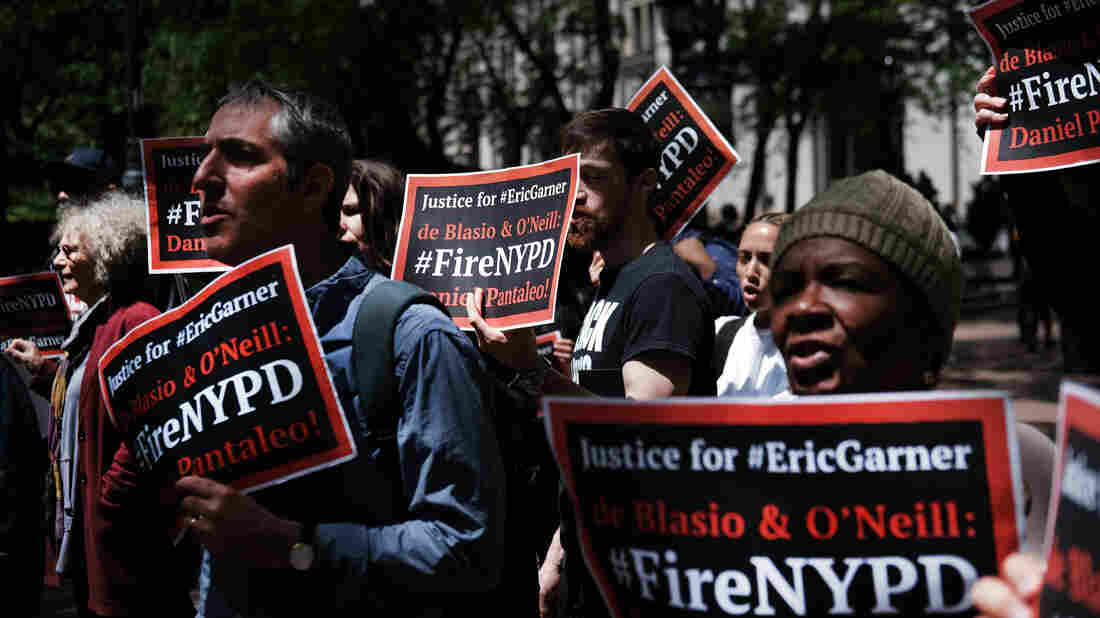 Protesters gathered outside of Police Headquarters in Manhattan in May during the police disciplinary hearing for Officer Daniel Pantaleo, who has been accused of using a chokehold that led to Eric Garner's death in 2014. Spencer Platt/Getty Images hide caption 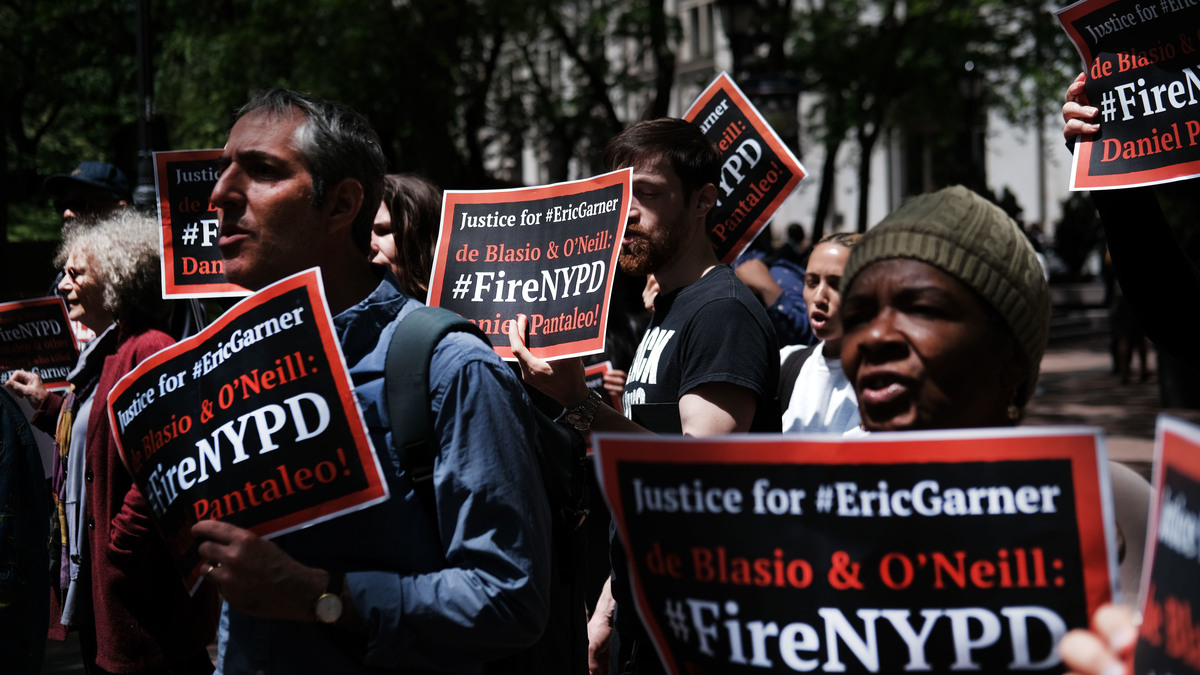 Protesters gathered outside of Police Headquarters in Manhattan in May during the police disciplinary hearing for Officer Daniel Pantaleo, who has been accused of using a chokehold that led to Eric Garner's death in 2014.

The news that federal prosecutors will not charge a New York City police officer in the death of Eric Garner, who repeated the phrase "I can't breathe" almost a dozen times while being arrested for an alleged misdemeanor, closed another door for Garner's family and police reform activists seeking accountability.

Now, five years after Garner died on a Staten Island sidewalk, Officer Daniel Pantaleo, who is accused of putting Garner in a fatal chokehold, remains on the force with a desk job. He was never charged criminally by local prosecutors and only just faced a disciplinary trial in May — the outcome of which is still pending.

It's a reality that adds more fuel to a movement against police brutality, one that started generations ago and continues with fervor.

"There's not one day that goes by I don't think about Eric Garner and all these other cases that I'm working on," said Nupol Kiazolu, 19. "These cases fuel the work that I do."

Kiazolu was about to start her first year of high school when Garner was killed. Now, she is a full-time college student and the president of Black Lives Matter Greater New York (not affiliated with the national organization). She said her activism is driven by a sense of survival.

"All we're doing is fighting for equity and another day to live," she said.

And there is power in resistance, said Darian Agostini, 24, a community organizer with the advocacy group Make the Road New York.

"We do this work because we love each other," Agostini said. "We love ourselves. We love our communities."

His job includes working with young people, educating them on their rights when encountering police. He draws from his own experience growing up in Brooklyn during the height of the NYPD's stop-and-frisk program — the practice of detaining, questioning and searching civilians for contraband.

"I don't know anyone who does organizing that's not also fighting for themselves," Agostini said.

He recounted how police frequently questioned him as a teenager about why he was walking in his own neighborhood or searched him aggressively as he was coming home from school. These interactions started when he was 14.

"Police officers jumped out of unmarked cars and threw me up against walls and emptied out my book bag while I was, like, coming home from school," he said.

The work to change police culture — or even just raise awareness around how young black men and women interact with police — requires stamina and pacing. And a thick skin.

"They tried to smear me and others who worked with us as being anti-police — it's a lie," said the Rev. Calvin O. Butts III, pastor of Abyssinian Baptist Church in Harlem. "We are not anti-police. But we are pro the people of the city of New York — all of us — and we will not be mistreated."

Butts has been working on police misconduct issues for nearly a half century, and in 1983 traveled to Washington, D.C., with other activist ministers to call on their congressional representatives to hold hearings in Harlem on police brutality.

In September of that year, people testified for nearly seven hours on excessive force, questionable arrests and street harassment by New York City police officers. All are issues that are still being raised today. At that time, black officers also reported extensive discrimination by their white colleagues on the force, according to a 1985 congressional report that came out of the hearings.

"Obviously, the energy that we expended trying to get justice and move in certain ways didn't work as well as we would have liked it to work," said Butts.

Current NYPD leadership will argue that much has changed, even in the five years since Garner died, and that there is a deliberate attempt to increase trust between communities and officers.

In 2015, the NYPD implemented its new neighborhood policing program with a core mission of building relationships between officers and community members. Commissioner James O'Neill told WNYC in late 2018 that the program was influenced by the Black Lives Matter protests that followed Garner's death.

Earlier this year, O'Neill announced he was implementing reforms to the NYPD's disciplinary system based on recommendations from an independent panel.

But those relatively small changes provide little comfort to those seeking some sense of justice for Eric Garner or others mistreated by police.

"What actually erodes communities' faith in the NYPD, their trust in the NYPD, is this idea that even if police do something wrong, they won't be held accountable," said Anthonine Pierre, deputy director of the advocacy group The Brooklyn Movement Center. "That sends a message to communities that the NYPD and the government doesn't actually care about them."

It's now up to Commissioner O'Neill to decide whether Pantaleo will be disciplined — or fired, as activists demand. O'Neill said that he's still awaiting a decision from the administrative trial judge who heard Pantaleo's case in May and that the Justice Department's decision to bring no charges won't affect that process.