Accessibility links
In 'Escalante's Dream,' David Roberts Retraces Route Of The 'Spanish Lewis And Clark' After a cancer diagnosis, author and noted mountaineer David Roberts sets out on the trail of Atanasio Domínguez and Silvestre Vélez de Escalante, remaining dutiful to the route some 240 years later.

'Escalante's Dream' Retraces The Steps Of The 'Spanish Lewis And Clark'

'Escalante's Dream' Retraces The Steps Of The 'Spanish Lewis And Clark' 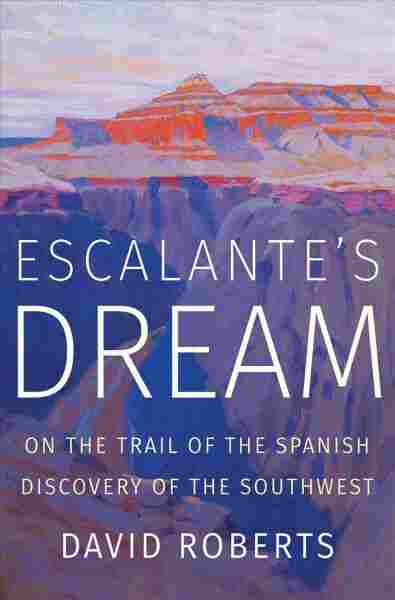 On the Trail of the Spanish Discovery of the Southwest

Perhaps the greatest irony of the road trip, what Escalante's Dream author David Roberts calls "that quintessentially American concoction," is the façade of structure.

Weight-bearing or purely ornamental, nearly all of the classic road trip narratives establish a framework for the journey. As John Steinbeck writes in Travels with Charley, "When the virus of restlessness begins to take possession of a wayward man, and the road away from Here seems broad and straight and sweet, the victim must first find in himself a good and sufficient reason for going."

For Steinbeck, the pursuit was a literary one, or so he had us believe. "I, an American writer, writing about America, was working from memory, and the memory is at best a faulty, warpy reservoir," he wrote. "...So it was that I determined to look again, to try to rediscover this monster land." In the 1983 classic Blue Highways, author William Least Heat-Moon set about tracing America's backroads, printed in thin blue lines on the road map, after losing his university professorship. "For a man who couldn't make things go right could at least go," he wrote. And what of Kerouac? Campus life had "stultified." The zestful Dean Moriarty awaited him out west. But most importantly, "I was a young writer and I wanted to take off."

The burden of identifying even the faintest reason for the journey, of pursing an explicit goal, makes sense in a literary scheme, and yet what most of us — I hazard to believe — love about the road trip is the implicit spontaneity of the exercise. The freedom to ditch the map, to swerve off the itinerary. It's the unqualified acceptance of random acts, and the genre's canonical works take full advantage of the freedom to maneuver in whichever direction one well pleases.

But in Escalante's Dream, author and noted mountaineer David Roberts does just the opposite, surrendering in nearly wholesale fashion to the itinerary. Diagnosed with stage 4 throat cancer in July 2015, Roberts — once scaling frozen heights in the Yukon but now tiptoeing on borrowed time — decided finally to pursue an idea he'd been pondering for more than 20 years: "retracing the 1,700-mile loop that Dominguez and Escalante had inscribed across a Southwest that was a blank on the Spanish map." Having metastasized to his lungs, there would be no curing Roberts' cancer, but his immunotherapy regime had proven mostly successful in "mitigating" the worst effects, and he and his wife Sharon slowly began imagining a future together once again.

"I was ready for an expedition as challenging in its own way as the journeys I had forged into the wilderness when I was young and afire with health and ambition," he writes, conjuring a melancholy that pulses at a low frequency throughout the book.

In 1776, New Spain viceroy Antonio Maria de Bucareli charged two young Franciscan priests, Atanasio Domínguez and Silvestre Vélez de Escalante, with establishing a trade route between Spain's oldest northern colony in Santa Fe and its newest in Monterey, California. Should they happen to convert the native inhabitants along the way, or locate the lost Spanish colonists allegedly still roaming the desert wilds, so much the better. Though Dominguez led the expedition, Escalante chronicled it, and in Roberts' judgment the result, unlike that of Lewis and Clark, is "far more readable" than its multiple contemporary interpretations.

To steer his trip, Roberts relies heavily on both Escalante's journal and report compiled by a bevy of scholars in celebration of the expedition's bicentennial, what he calls "a masterpiece of exploratory rediscovery." Roberts is clearly infatuated with both texts, but it's in the minutiae of these complimentary guides that Roberts will likely lose many readers; neither of the accounts were written to entertain, and Roberts himself — though occasionally wringing insight from between the lines — falls short of truly re-animating the expedition. He spends a good deal of time, for example, divining how many horses and mules likely accompanied the friars on their voyage; no doubt an important question for the academics, but hardly a thrill for most of us neophytes. Even his interactions with the locals along the trail fail to energize the narrative. Most of them have never heard of Dominguez and Escalante, and those who have are usually misinformed and spreading apocryphal news, as Roberts is often quick to point out. He writes:

"Not for the first time, I realized that in 1975 the Commission men had been able to call upon the long memories of local residents to enhance their rediscovery of the Spaniards' route. By 2017, that link of oral lore seemed to have gone extinct — as exemplified by the stare of incomprehension of the old lady in the visitor center."

But rather than ditch the trail in pursuit of more fertile ground — the margins of my copy are filled with personal pleas for him and his wife to go rogue and chase a little whimsy — the author remains frustratingly dutiful to the original route. Of course, more than 240 years later, a truly accurate retracing is impossible; dams have flooded multiple portions of the trail, and much of it is now privately owned. In both cases, Roberts finds the quickest workaround possible and continues forward, but not before briefly considering the choices he would have made as a younger man unshackled by the realities of cancer — hence the aforementioned melancholy.

"Before cancer, I would have set out at once to hike the beguiling route as it twists between fins and slots," he writes about a particularly challenging portion of the route not accessible by vehicle. Instead, he and his wife simply follow the highway, that "effortless alternative," "saving the rugged trail through the slickrock domes and pockets for another life."

It's unfortunate that Roberts relegates his sickness to the periphery of his road trip, for it's in those rare instances when he humors the sentiments of his own mortality — when he honestly confronts the limits of his latest adventure and affords himself the luxury of reflection — that Escalante's Dream finally comes to life.

"The bad days when it was hard to get back in the SUV and keep going portended the decline into helplessness, hospitalization, and death that was never far from my thoughts," he writes. "Often I wondered if Escalante, who must have suffered every day from the 'urinary ailment' that probably prefigured his death, rode onward with a kindred sense of doom. But he had one advantage over me: He was certain of the far better world that lay on the other side."