Accessibility links
Military Leaders And Civilians Sign Deal In Sudan There is considerable disagreement over terms of the deal, which will be detailed in a second agreement yet to be signed. 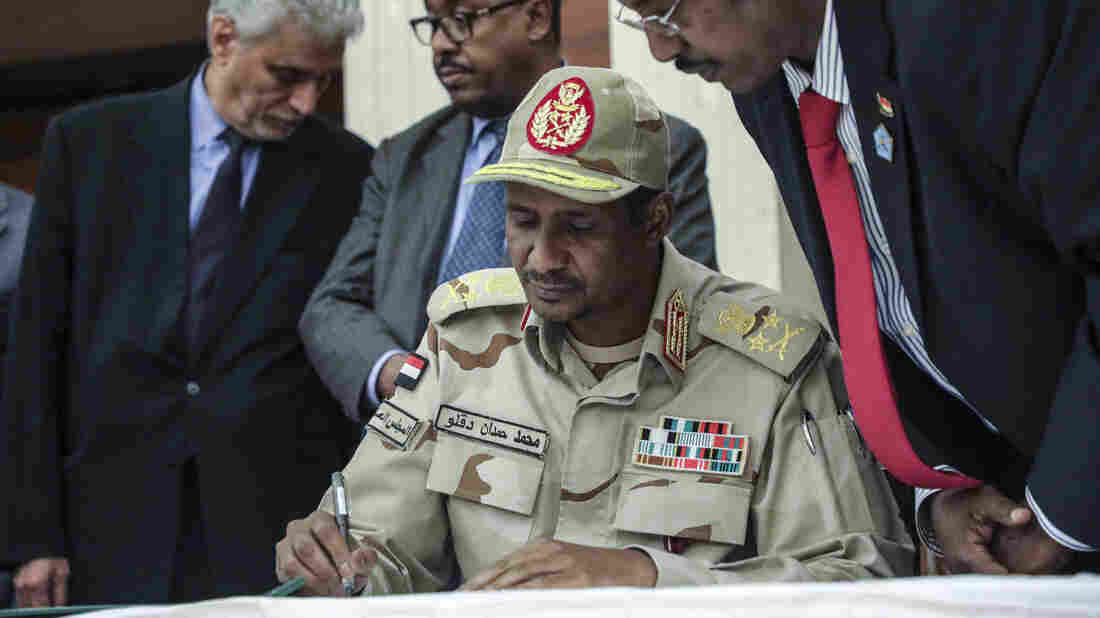 The leaders of Sudan's pro-democracy movement and the country's ruling military council signed a power-sharing agreement on Wednesday. The two sides held a signing ceremony in the capital, Khartoum, marking the end of three months of protests and negotiations. The document is a step toward civilian rule, but details of the agreement, including how power would be divided, still need to be worked out.

The deal establishes a joint civilian-military sovereign council to govern Sudan during a three-year transition period before elections. The council will be made up of five civilians, five people from the military, and an 11th person to be chosen by the council. A military leader will head the council for the first 21 months, and then a civilian leader will lead it for the following 18 months.

Further terms of the transitional period will be detailed in a constitutional declaration, but disagreements persist over how power would be shared among the sovereign council, the Cabinet and the legislative body, and some protesters have criticized the deal for not handing power over to civilians immediately.

There is also disagreement over an investigation into military leaders' role in the use of violence to crush protests, and whether they can have immunity from prosecution, according to The Associated Press.

On June 3, troops opened fire on demonstrators in Khartoum and killed at least 128 people.

On the day of the protest NPR spoke with the Central Committee of Sudan Doctors, which was helping to coordinate the demonstrations. The committee told NPR of violence inflicted on protesters by Sudanese troops: "The Transitional Military Council forces are firing live ammunition inside East Nile Hospital and chasing peaceful protestors inside the hospital's campus. Royal Care Hospital in Buri area is under siege by the Transitional Military Council (TMC) forces at the moment. TMC's forces are preventing volunteers from reaching the hospital."

Wednesday in Khartoum, Lt. Gen. Mohamed Hamdan was a signatory for the military to the power-sharing deal. The New York Times reported on the signing, "Protest leaders are uncomfortable with the prominence of General Hamdan and his Rapid Support Forces, which have emerged as the dominant group in a byzantine security apparatus that under Mr. al-Bashir included military units, security agencies and semiofficial militias."

Former president Omar Hassan al-Bashir, a former military general, was ousted in April. He ruled Sudan for 30 years. Bashir is now wanted by international prosecutors for war crimes in Darfur.