Accessibility links
Trump Attacks Congresswomen At N.C. Rally, As Crowd Chants 'Send Her Back' President Trump piled on four freshmen congresswomen of color after tweeting this weekend that they should "go back" to the countries they came from, even though three were born in the U.S. 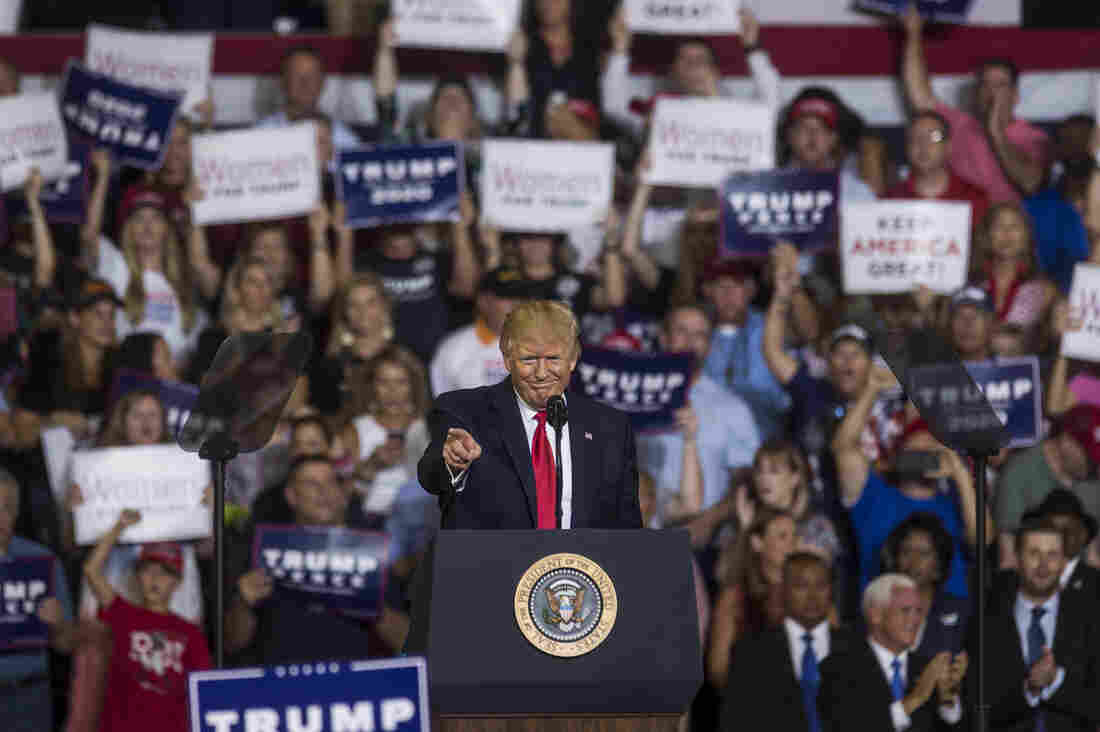 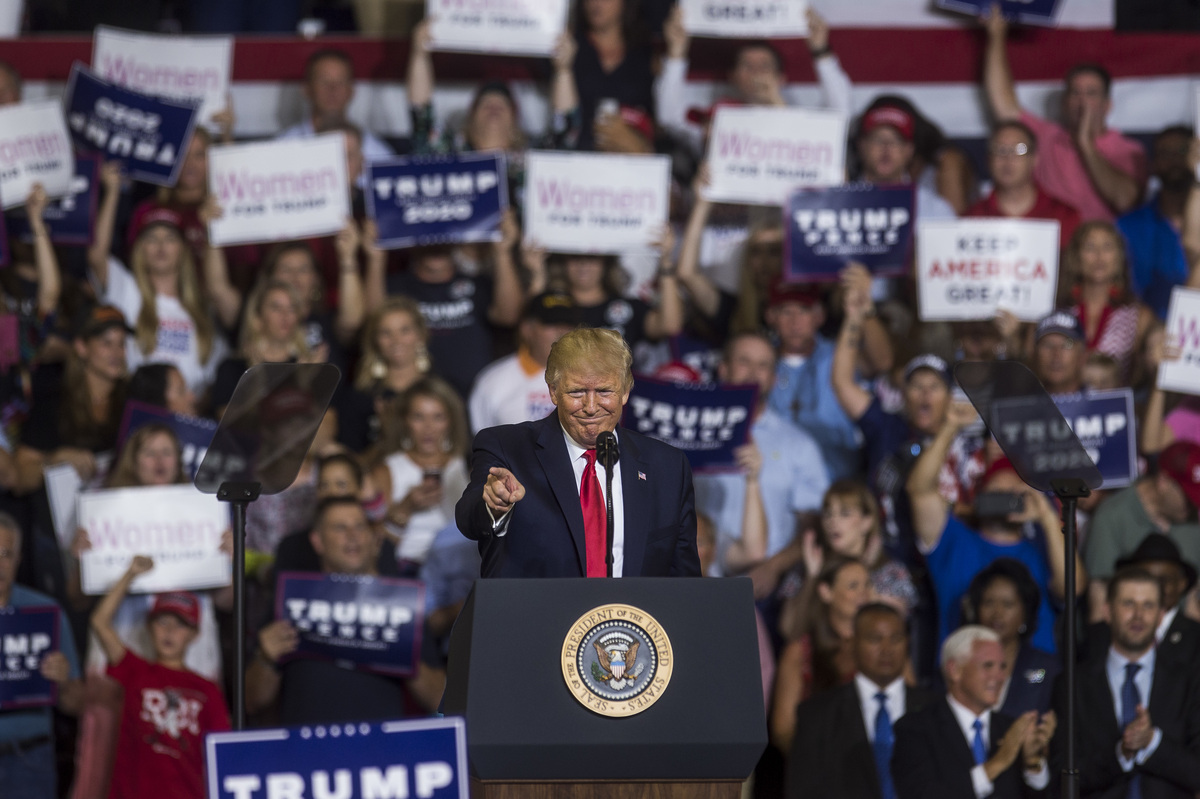 President Trump gestures to the crowd during a Keep America Great rally in Greenville, N.C. on Wednesday.

President Trump continued his attacks against four freshman Democratic congresswomen at a campaign rally in Greenville, N.C., on Wednesday, with the crowd breaking into a chant of "send her back" against one, echoing the president's racist message from the weekend.

Trump on Thursday disavowed the chant.

But Wednesday night, Trump piled on Minnesota Democratic Rep. Ilhan Omar, who immigrated to the U.S. as a refugee from Somalia as a child. Egged on by several false explosive claims against the Muslim congresswoman, Trump's supporters broke into the chant.

It's the latest fanning of flames by Trump after he tweeted on Sunday that the four progressive members — Omar, New York Rep. Alexandria Ocasio-Cortez, Michigan Rep. Rashida Tlaib and Massachusetts Rep. Ayanna Pressley — should "go back and help fix the totally broken and crime infested places from which they came." All four are American citizens who are women of color, and all except Omar were born in the United States. Trump has repeatedly refused to apologize even as the House passed a measure condemning his remarks.

Omar responded in a tweet on Wednesday night, quoting the late Maya Angelou by saying, in part, "You may kill me with your hatefulness, But still, like air, I'll rise."

Asked if the campaign would disavow the "send her back" chant, Trump campaign communications director Tim Murtaugh said in a statement: "The Squad, as they call themselves, are now the leaders of the Democrat Party. Americans don't like it when elected officials consistently disparage this country. All the Democrats are pushing socialist ideas that are terrible for America. They are all the same."

Later in the afternoon on Thursday, a reporter asked Trump directly why he did not stop the chant. He said, "I started speaking very quickly." Trump did not chastise the crowd at the rally and paused for several seconds while the chant was audible.

"I was not happy with it. I disagree with it," he said Thursday in the Oval Office.

Crowd at tonight's Trump rally in North Carolina breaks out into chants of "Send her back!" as the president attacks Rep. Ilhan Omar pic.twitter.com/0q5L39W61h

During Wednesday night's rally, Trump ticked off his alleged grievances with each of the four women, painting them as taking anti-American stances. With Ocasio-Cortez, he said her name was too long to learn how to say and simply called her "Cortez."

"They're always telling us how to run [the country]... you know, if they don't love it, tell 'em to leave it," Trump said.

While the Trump-friendly crowd may have cheered his doubling down on his racist remarks, that sentiment isn't shared throughout the greater city of Greenville and on the campus of East Carolina University, where Trump's rally was held. Trump narrowly won North Carolina, but he lost Pitt County, which is about a third African-American and about 6% Latino. 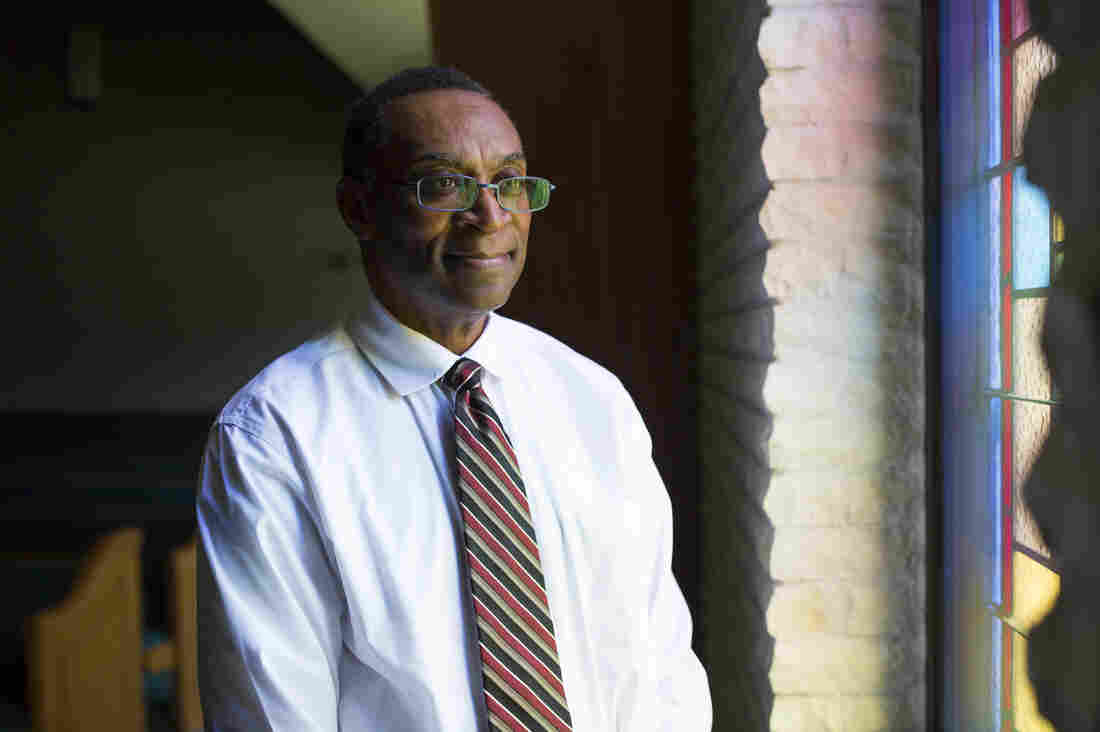 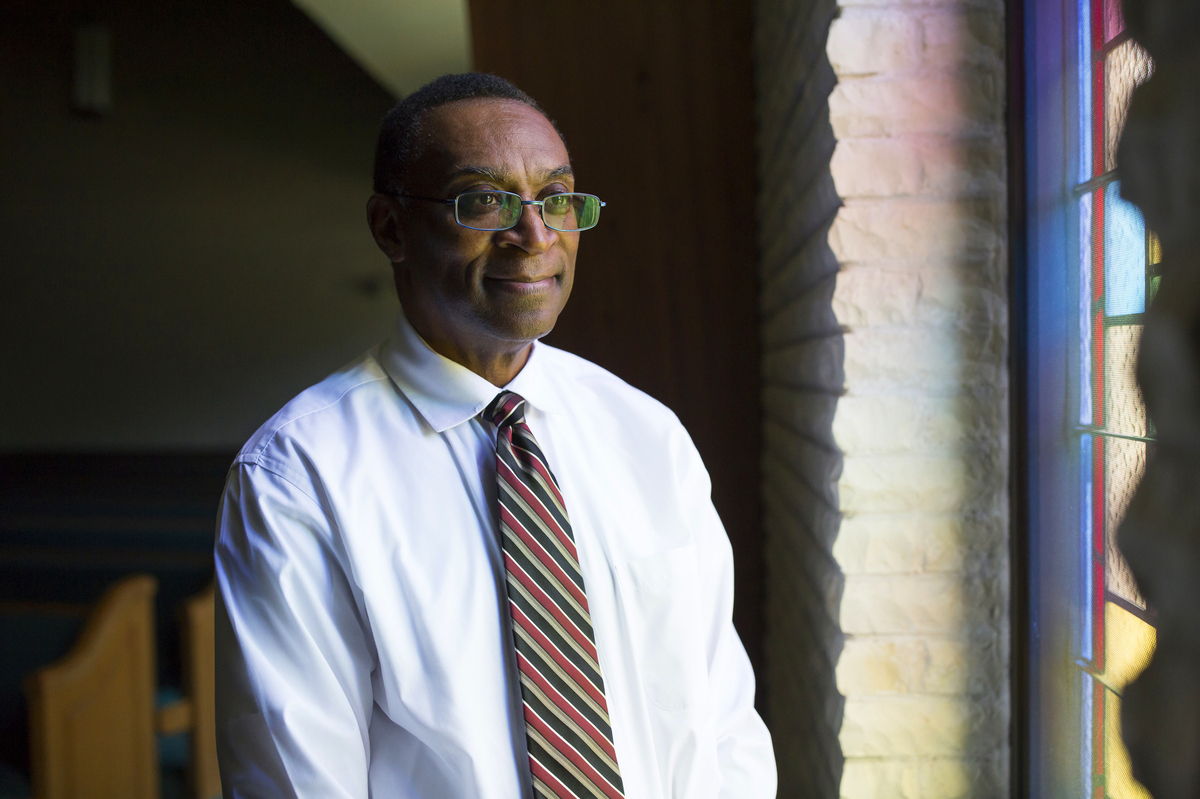 Kenneth Hammond is the interim pastor at Sycamore Hill Missionary Baptist Church, an African American community of worship which was burned to the ground by an arsonist in 1969. Hammond said Trump's language was unmistakable, and was a trope frequently used during the fight for civil rights.

"We as a people and we as a congregation have had firsthand experiences on how racist activities can impact people of faith... When you hear the rhetoric of going back from where you came from — for many of our folk, that's two blocks from here, so we are well invested in this country," Hammond said. "The contributions that we've made to the success of this country are well-documented." 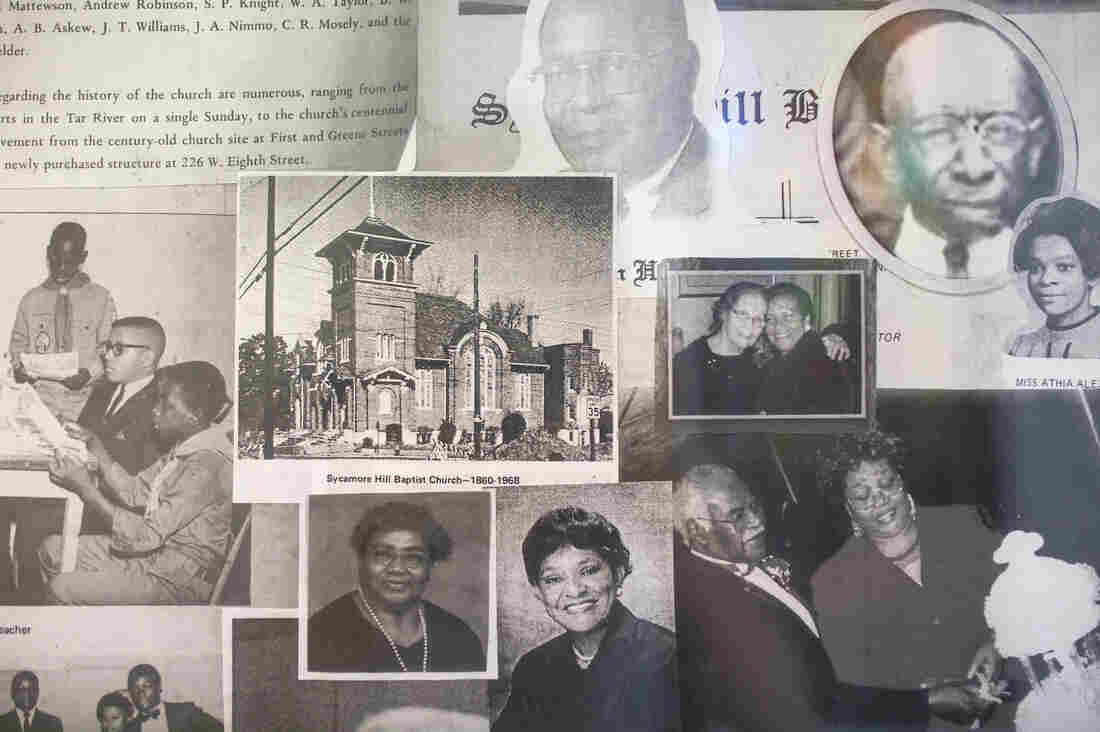 Images of former congregants as well as an image of the church's former building hang on the wall at Sycamore Hill Missionary Baptist Church. Madeline Gray for NPR hide caption 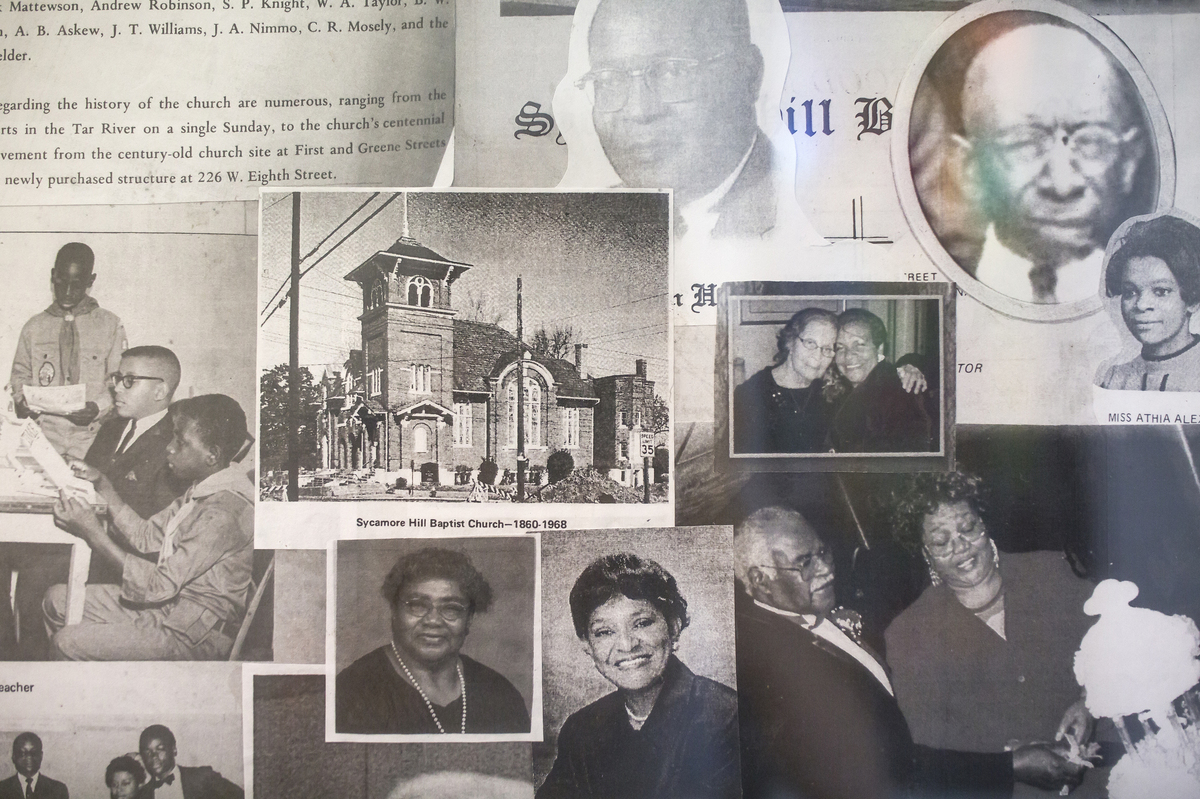 Images of former congregants as well as an image of the church's former building hang on the wall at Sycamore Hill Missionary Baptist Church.

Trump has argued, and did again on Wednesday night, that Democrats are the ones using extremist language, but Hammond said that argument doesn't hold water.

"If it barks like a dog, it looks like a dog. It's a dog. And so it's it's it's racist is racist at its worst level," the pastor said.

Even some of Trump's supporters in Greenville were dismayed by the tweets, such as Emma Arndt, chairwoman of the newly-formed College Republicans on East Carolina's campus.

Much of the rest of the rally was standard Trump fare, but there was a clear emphasis on women at the rally even as the president was on the attack against multiple Democratic women. Fresh off the launch of "Women for Trump" this week, signs with that slogan dotted the crowd. The president touted how well the economy was doing for women especially, and he hammered home the country's strong economic success overall — something most Republican strategists wish he would make more of his main emphasis instead of insults and stoking other controversies.

As he usually does at rallies, Trump relived his unlikely 2016 election victory and condemned the "witch hunt" against him, even using profanity. This rally was originally scheduled to coincide with former special counsel Robert Mueller's testimony on Capitol Hill, but that has now been delayed for one week.

Trump did revel in the failed vote to move forward on articles of impeachment earlier today in the House, which was handily defeated by both Republicans and Democrats.

"That was a slaughter," Trump said, conceding that he did "have to thank most of the Democrats" for their votes. Many of the Democratic members who voted no want to go through a full process of investigations and hearings before voting. 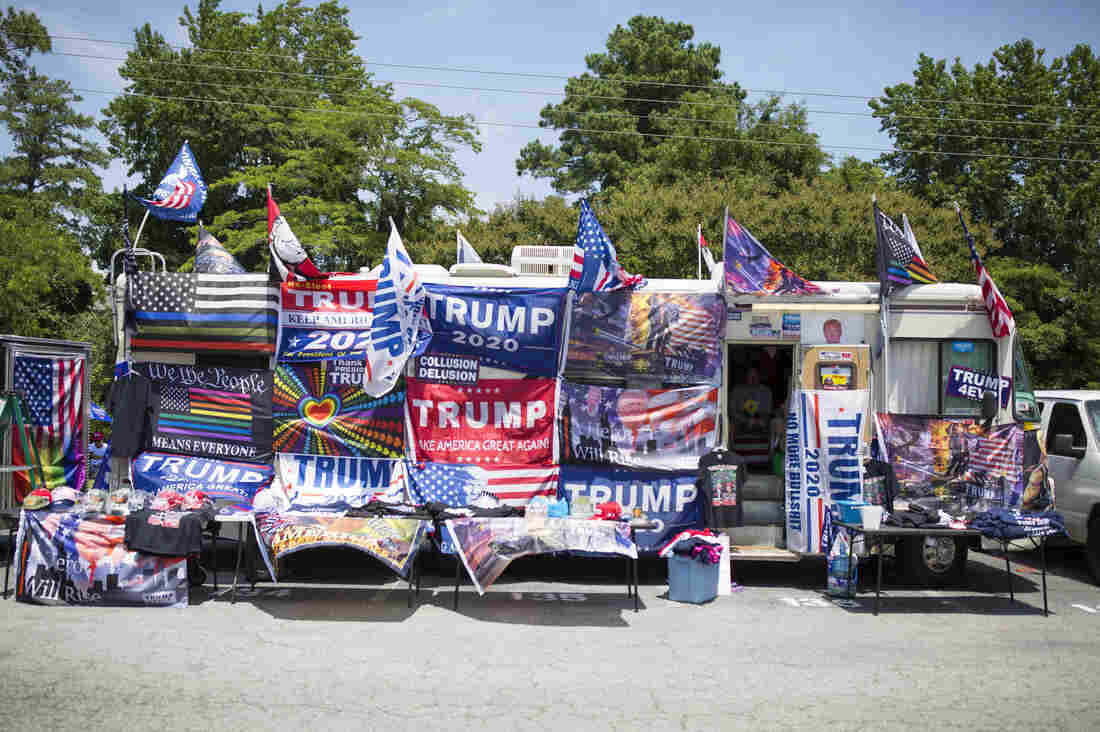 A merchandise truck sits in the parking lot of the Williams Arena before a rally with President Trump in Greenville, N.C., on Wednesday. Madeline Gray for NPR hide caption 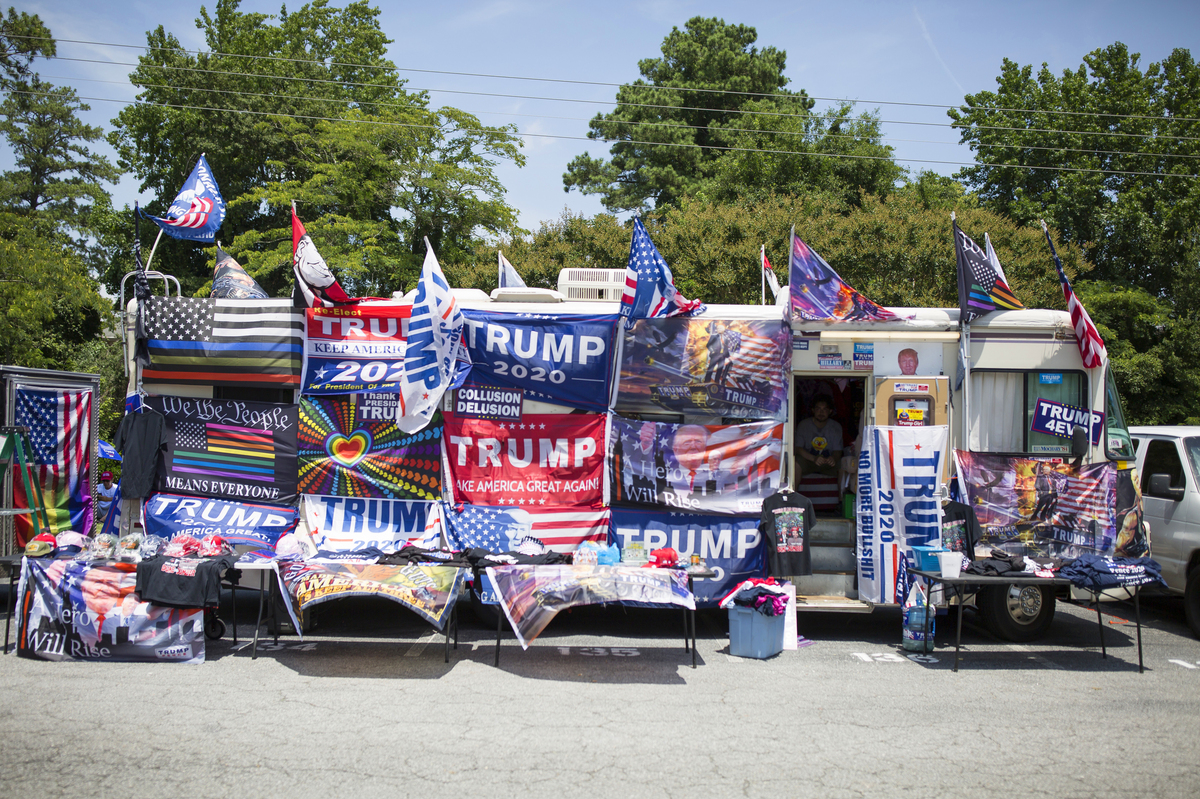 A merchandise truck sits in the parking lot of the Williams Arena before a rally with President Trump in Greenville, N.C., on Wednesday.

Trump did turn his attention toward some of his potential 2020 rivals. He mocked former Vice President Joe Biden's lackluster debate performance last month, reviving his nickname of "Sleepy Joe." Trump reveled in Biden's polling slide after California Sen. Kamala Harris's attack against him in last month's first debate about his past opposition to mandated busing in the 1970s.

Trump did note that Massachusetts Sen. Elizabeth Warren, who he again referred to as "Pocahontas" was rising. And he also mocked the pronunciation of South Bend, Ind., Pete Buttigieg's name and said he was unprepared to be president.