Accessibility links
NPR Review: 'Raised in Captivity,' By Chuck Klosterman Chuck Klosterman's new collection of "fictional nonfiction" is full of people who subvert expectations and find ways around the systems that rule our lives. Also, there's a puma in an airplane toilet.

34 Ways To Beat The System In 'Raised In Captivity'

34 Ways To Beat The System In 'Raised In Captivity' 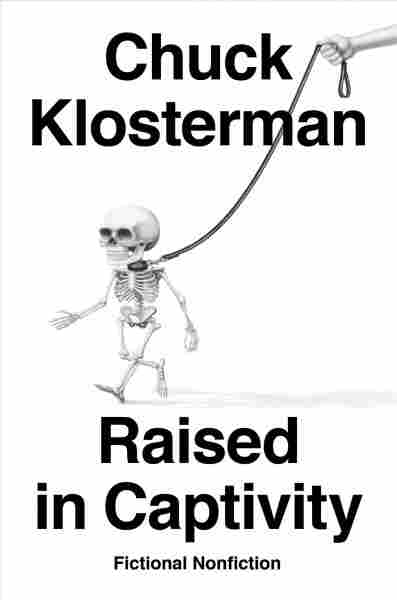 They sound like jokes, these stories. Barroom tales saved up for that hour before last call when everyone has run out of interesting things to say about their jobs, their kids, their fantasy football league. "Hey," the guy at the far end of the long oak says. "You ever hear the one about the high school football team that only had one play?"

That story, "Execute Again," and all the others make up the moving parts of Chuck Klosterman's newest collection, Raised In Captivity — a mash-up of 34 short-short stories that stretch from the vaguely science fictional to the vaguely thriller-y to the vaguely vague.

And that's not an insult. That's design. That's deliberate, this sense of disconnection. Of extreme oddity cloaked in muffling banality. There's a prison story called "If Something Is Free The Product Is You" which is all about a screwdriver. It could be a novel, but if it were a novel, it would have to be about prison and the narrator and how he ended up in prison and all the other prisoners. At seven-and-a-half pages (one of the long-ish ones), it can just be about what it is about, which is a screwdriver and the worth of such a thing at a moment in life where all markers of traditional worth (and, therefore, power, influence, potential) have been removed. It becomes a story about pure economics and the long con. A distillation of motive.

The puma story (which is also the title story, "Raised in Captivity") is just straight weird, no chaser. "What About The Children" is about a man, his brother and his sister who very consciously start a cult in California; who presume (correctly) that people know all about cults these days and that, within the population of everyone, there exists a certain segment who really want to join a cult — who expect the cult to do cult-y things and display all of the cult-ish signifiers, up to and including the inevitable mass suicide.

Chuck Klosterman: He Keeps On Shoutin'

That one is weird with a message. It's not telegraphed, just there: In any population, there exists a measurable percentage of really stupid people just waiting to be taken advantage of by... something. That message comes up a lot in Klosterman's stories. But it's okay because, the way they're written, we're (almost) always in on the joke. We're never with the stupid people. We're always on the side of the bright.

The book is tagged "Fictional Nonfiction," which is kinda cutesy, and not in a great way. I get the intent, but shut up, right? They're stories. No one really saw a whale get struck by lightning and, because of that, decided to change his entire life. No one really found a puma in the first class airplane bathroom. But what's sticking in my brain is that a lot of them, maybe most of them, maybe really kinda all of them, feel real. "Microdoses of the straight dope" — that's another way Klosterman (or someone on his marketing team) describes this collection. And that's truer, because he's playing the Hunter Thompson game here, living by Thompson's maxim that "fiction is a bridge to the truth that journalism can't reach."

Like "Execute Again," the football one? That's a great story because it is so off-puttingly smart and just one shuffle-step left of real. The set-up is simple: A high school football coach (who knows nothing about football and has never coached before) designs a single, complicated play which, when executed perfectly, "would always, always, end up 2.7 yards beyond the line of scrimmage, with a standard deviation plus or minus four inches." The team learns no other plays. They have no punt formation. No defensive strategy. Just this one play.

Absurdity and intelligence, applied in unequal measure. A sliding scale between reality and pure banana-pants craziness.

And it works. But it works in more than just a few high school football games. It is a thing that has ripples. That alters the life of everyone who learns it. Because in learning it, they learn that all rules and formalities are breakable. That anyone smart enough can game the system. Can change the world.

"Execute Again" is the second story in the collection. Read alongside the puma one, they create the brackets on which the rest of Raised In Captivity hangs. Absurdity and intelligence, applied in unequal measure. A sliding scale between reality and pure banana-pants craziness. Most of them work. Some don't. Some (like the assassin one, for example, or the one about the woke boyfriend), really do come off like complicated jokes that don't really land, and others are muddled by their own ironic detachment or internal Gen X sarcasm.

But taken in the aggregate, Klosterman's microdoses of reality present something larger than the sum of their parts: A clear-eyed vision of consensus reality as a breakable construct, easily manipulated by those who can see the complicated workings inside and come up with the one great play that bends those rules and works every time.