Accessibility links
Stream Nusrat Fateh Ali Khan's Monumental 'Live At WOMAD 1985' Performance Right before he recorded a string of beloved albums for Peter Gabriel's label, the Pakistani vocal master of qawwali gave a milestone performance in 1985. It's now available for the first time. 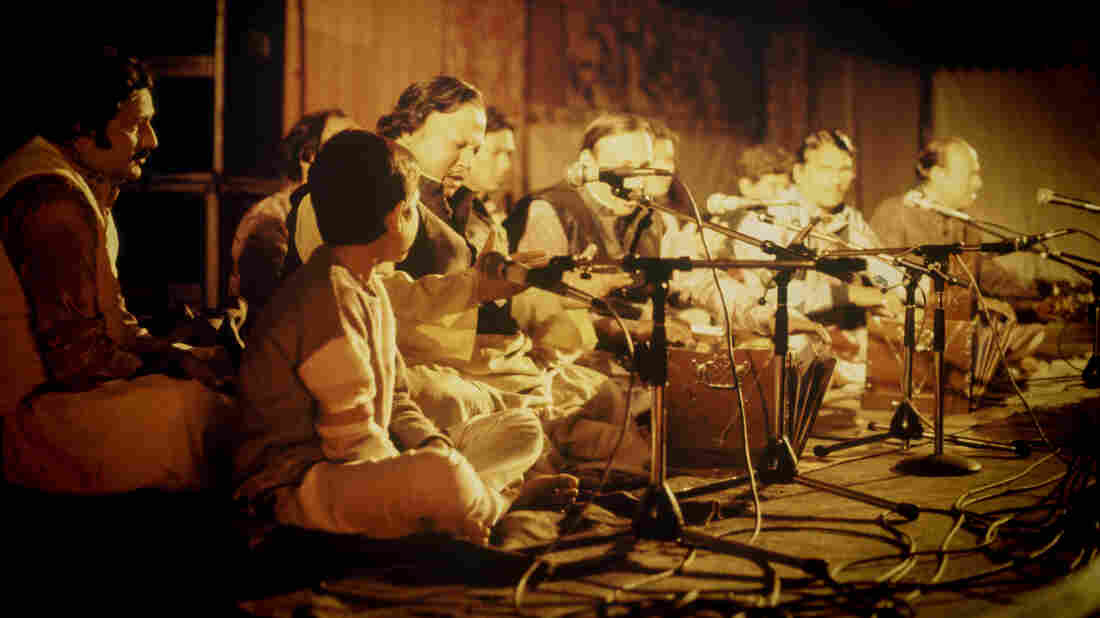 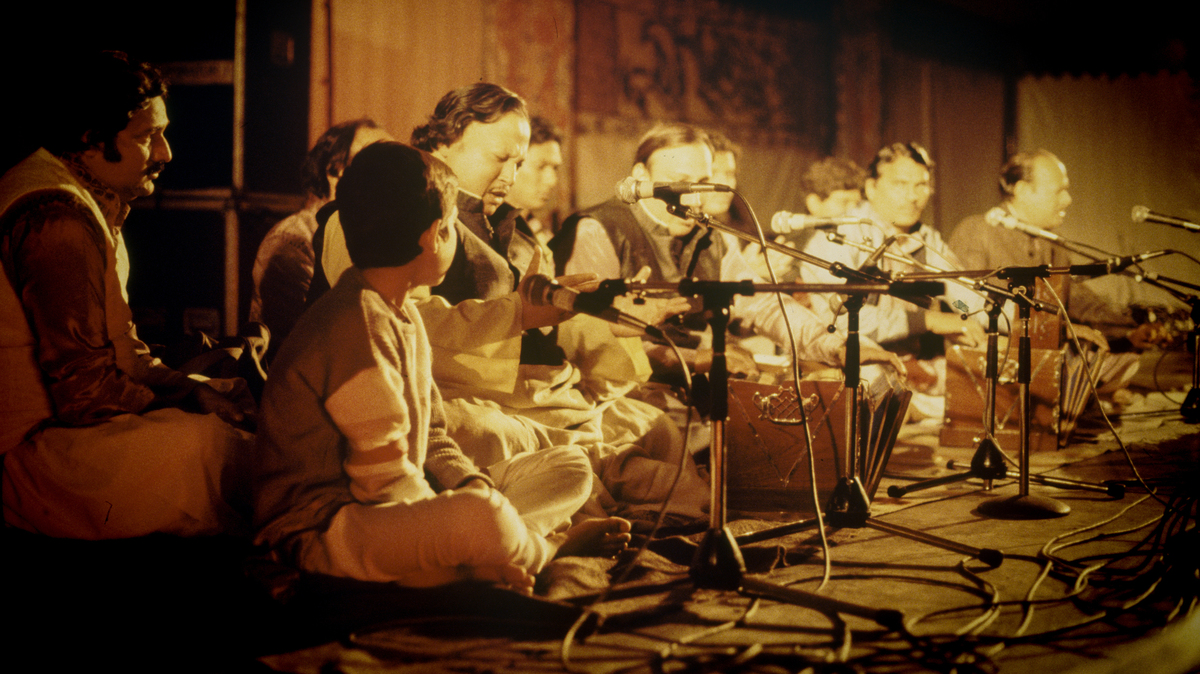 Nusrat Fateh Ali Khan and his Party, performing live at the WOMAD festival in 1985.

Nusrat Fateh Ali Khan was hailed as one of the singers of the 20th century. Even now, more than 20 years after his death in 1997, there's no dearth of opportunities to hear his work, through a combination of sheer popularity, an enormous official discography, and literally thousands of pirated versions. All in all, no one has been suffering for lack for recordings of this Pakistani vocal master of qawwali, a staggeringly beautiful and ecstatic musical form.

And yet, here we are, with a brand-new issue of Khan captured at his vocal prime, recorded when he was just at the precipice of becoming an international phenomenon: a midnight set recorded in 1985 at England's WOMAD festival, which was co-founded by Peter Gabriel five years earlier to showcase international music and dance talent. It was the performance that was hailed as Khan's first real introduction to non-South Asian audiences.

It's a recording that has languished in the archives for 34 years. (There are some low-quality videos of this performance online, but the sound on this album release, carefully digitized and remixed, is excellent.) Whether for longtime fans or new initiates, Live at WOMAD 1985 is an album to be treasured.

A bit of background for newcomers: qawwali — whose root means "utterance" in Arabic — is a uniquely South Asian musical style. These devotional songs are, in places including Pakistan and India, a core part of Sufism — that is, the mystical branch of Islam that emphasizes a personal connection to God, and embraces the qualities of tolerance, peace, and equality as core principles. (Sufi shrines and gatherings have been targeted for violence by Muslim extremists, both in South Asia and elsewhere.) As Sufism spread from Persia and what is now Turkey to northern India some 800 years ago, its poetry and music were blended with local styles.

Considering the electrifying energy that surges through a qawwali performance, the traditional set-up is rather humble. A group of performers, referred to in English as a "party" – and all male – sit cross-legged on a rug-covered stage. The main singer is usually accompanied by one or two harmoniums to provide melodic support as well as percussion (normally, the tabla and dholak drums), while a small chorus sings and provides heartbeat-like claps.

This 1985 concert marks Khan at his most traditional. It starts out with one of Khan's signature songs: "Allah Ho" [God Is], which is also known on other recordings as "Allah Hu" or "Allah Hoo." It's a hamd, or praise song, and the traditional way of opening a qawwali performance. The audience was slowly drawn in, first through the plush harmonium, beautifully played by Khan's brother, Farrukh Fateh Ali Khan (who has since died as well), and the constant murmur of tabla and the hand claps of the group's chorus. Those listeners couldn't have been prepared for what was about to erupt.

Khan — who is often reverently called by the honorific Khan Sahib — was literally born into this style: his family had been qawwals for over 600 years. He learned the family business from his father and uncles — though his father, who was primarily a Hindustani (North Indian) classical singer, dreamed that his son would become a doctor.

His first public performance came at his father's funeral, when he was just 16 years old. There was a strong adherence to classical music in his family tradition, which you can hear in Khan's own performances. Without question, he was on fire when he sang — lovers of soul and gospel will find much common ground here. But he was also an exemplary improviser in the Hindustani classical style, using solfege-like swara syllables to race up and down the span of his range, darting between intervals large and small, and always with an ear to the technical and emotional demands of a particular raga.

At WOMAD in 1985, Khan led his neophyte listeners through a very typical qawwali performance arc: after praising God in "Allah Ho," the group moved to "Haq Ali," [Ali is Truth], a song devoted to the Prophet Muhammad's son-in-law (and a figure revered by Sufis of both the Sunni and Shi'a sects); "Shabaaz Qalandar," which honors a 13th century, Afghanistan-born Sufi master; and a more contemporary love song, "Biba Sada Dil Mor De," which opens with the line "If you can't remain in front of my eyes, please give me back my heart." (This style of song, called a ghazal, can be understood as a secular love song or, more mystically, as a devotee's love of the divine.)

In all, it was a very truncated performance — in more traditional settings, qawwali concerts can go all night — but it was enough to hook listeners in. 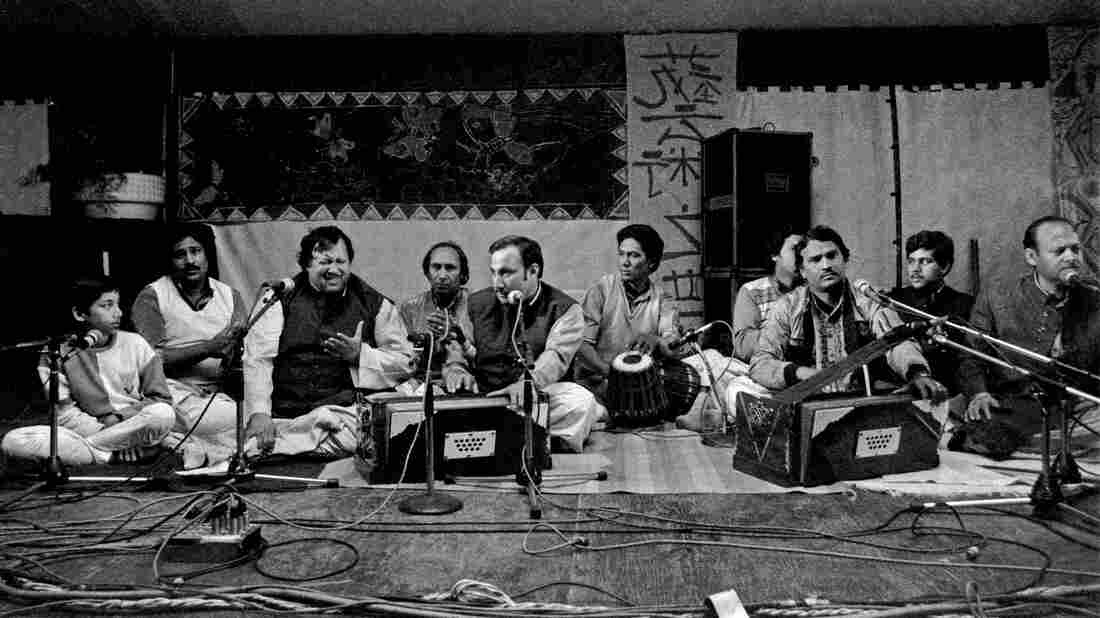 In a qawwali performance, the main singer is usually accompanied by one or two harmoniums to provide melodic support as well as percussion, while a small chorus sings and provides heartbeat-like claps. Jak Kilby/Courtesy of Real World Records hide caption 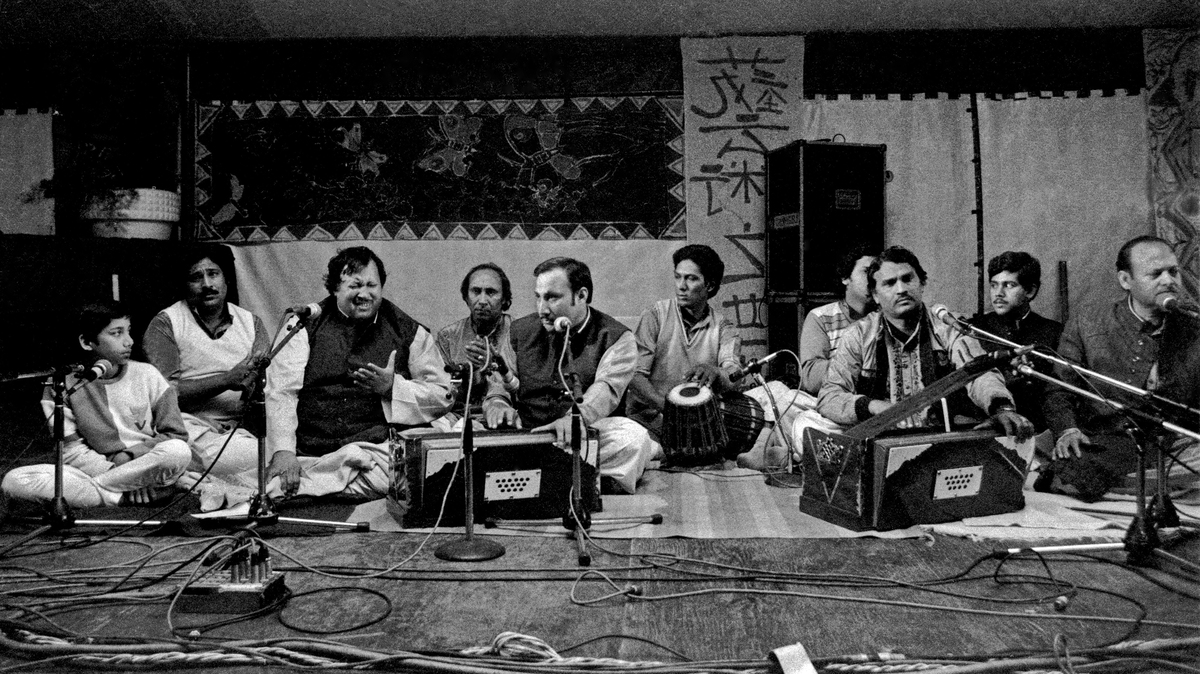 In a qawwali performance, the main singer is usually accompanied by one or two harmoniums to provide melodic support as well as percussion, while a small chorus sings and provides heartbeat-like claps.

It's hard to overstate what a milestone this festival was for Khan. Not long after he gave this performance at WOMAD, the Pakistani artist went on to release a string of studio albums for Peter Gabriel's tastemaking record label, Real World. (Months after his WOMAD date, he made an excellent series of live recordings in Paris for the French label Ocora, as the late anthropologist and ethnomusicologist Adam Nayyar, a friend of Khan, detailed in a lovely remembrance that he wrote after the singer's death; around the same time, Khan also made a string of sublime live albums in London, released by the Navras label.)

Live at WOMAD 1985 offers something else, too. It's a 30-plus-year-old album, which means that — at least for the album's duration – it offers a sonic refuge from the world we all presently inhabit, one that's shadowed by decades of fear, suspicion, growing nationalism and acrimony. Not only was it made many years before the terrorist attacks of Sept. 11, 2001 — right after which some Pakistani immigrants to the U.S. were either deported by the government, or left the country ostensibly of their own accord — but also decades before Pakistanis in the U.S. worried about ICE raids, and a generation before racist rhetoric and heated anti-Muslim comments were part of the daily political salvos fired in the United States. Given what's elapsed in the past three decades, it's hard to envision a traditional, firmly Muslim artist reaching the same apex of visibility, or even popularity, in places like the U.S. or the U.K. had he emerged not in 1985, but in 2015.

In retrospect, it's astonishing to think how beloved Khan became in such short measure. His presence in front of non-South Asian audiences lasted barely a dozen years — yet he counted among his fans Jeff Buckley, Madonna, Mick Jagger, Red Hot Chili Peppers, and Eddie Vedder, with whom he recorded. Even so, pressure points around faith, identity and allegiances grew for Khan during his lifetime, and at home. He lamented the state of music, and by extension, the encroaching iron hand of a puritanical form of Islam, in his home country — a sort of fundamentalism that, if it had existed centuries earlier in South Asia, would have precluded qawwali from ever having developed in the first place.

"In Pakistan, people have an indifferent attitude towards music. There are no institutions to teach music and singing," he told Pakistan's Herald magazine in 1991. "[Our] people are morally confused about music. Those who want to learn or have learned are always confused and feel guilt. But to tell you the truth, classical music ... is not against Islam. It is not haram [forbidden by Islamic principles]."

While his faith was rock-solid, Khan was catholic in his musical tastes; along with eventually making an array of crossover projects with European, British and North American artists, he wrote the music for and appeared in several Bollywood films, on screen or as a playback singer — the rawness smoothed out into honeyed drips of sound.

But Live at WOMAD 1985 offers pure soul — each run up and down the scale a jolt of adrenaline, each beat of the tabla drum and each handclap making the heart pound faster and louder. And this, truly, is the highest purpose of Sufi music: to bring performers and listeners alike into a state of ecstatic union with the divine. In 1993, after a concert that drew 14,000 people to New York's Central Park, he told Time magazine: "My music is a bridge between people and God."

Nusrat Fateh Ali Khan struggled with his health for a long time, but when the end came, it came quickly. In August 1997, at just 48, he traveled from Pakistan to London for medical treatment; he was rushed straight from the airport to a hospital, where he died of a heart attack. In the 21 years since his death, a raft of younger male relatives have tried to carry Khan's mantle, as performers of either buoyant qawwali, gauzy love songs, or treacly film tunes. But none of them have sparked the devotion of an international audience the way that Nusrat did. The Shahen-Shah, king of kings, qawwali's brightest shining star, retains his crown.