Accessibility links
'Lion King' Review: Disney Remake Is More Creative Dead End Than Circle Of Life Disney's Lion King is so realistic-looking that, paradoxically, you can't believe a moment of it. The computer-generated blockbuster feels like the world's most expensive safari-themed karaoke video. 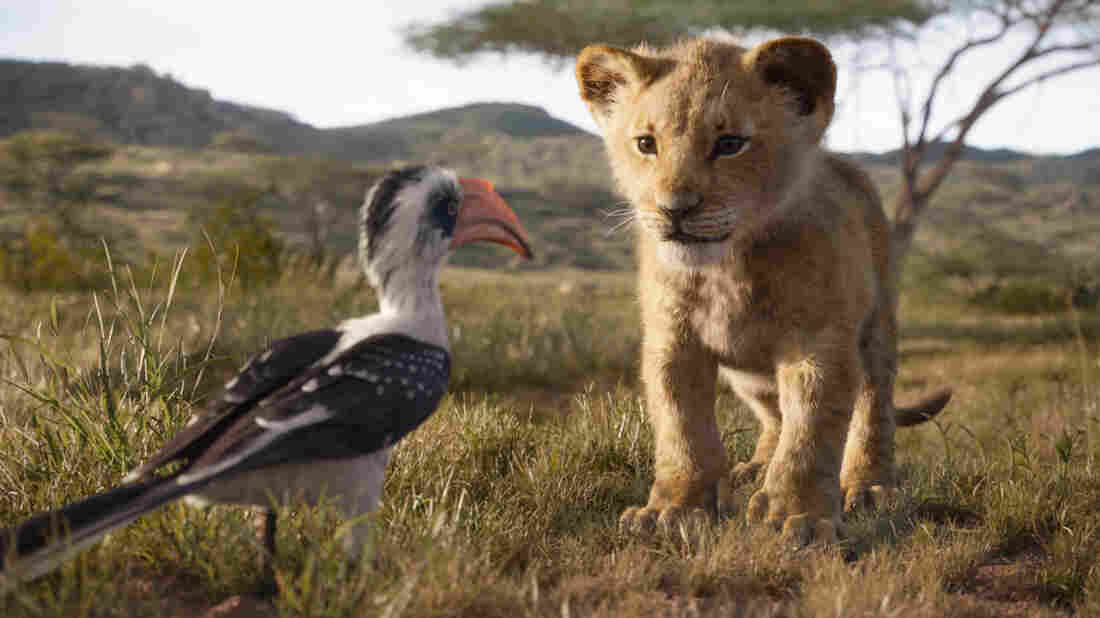 A sophisticated mix of digital imagery and virtual-reality techniques give Disney's Lion King remake the feel of a live-action film. The result plays like a Hollywood blockbuster disguised as a National Geographic documentary. Disney Enterprises, Inc. hide caption 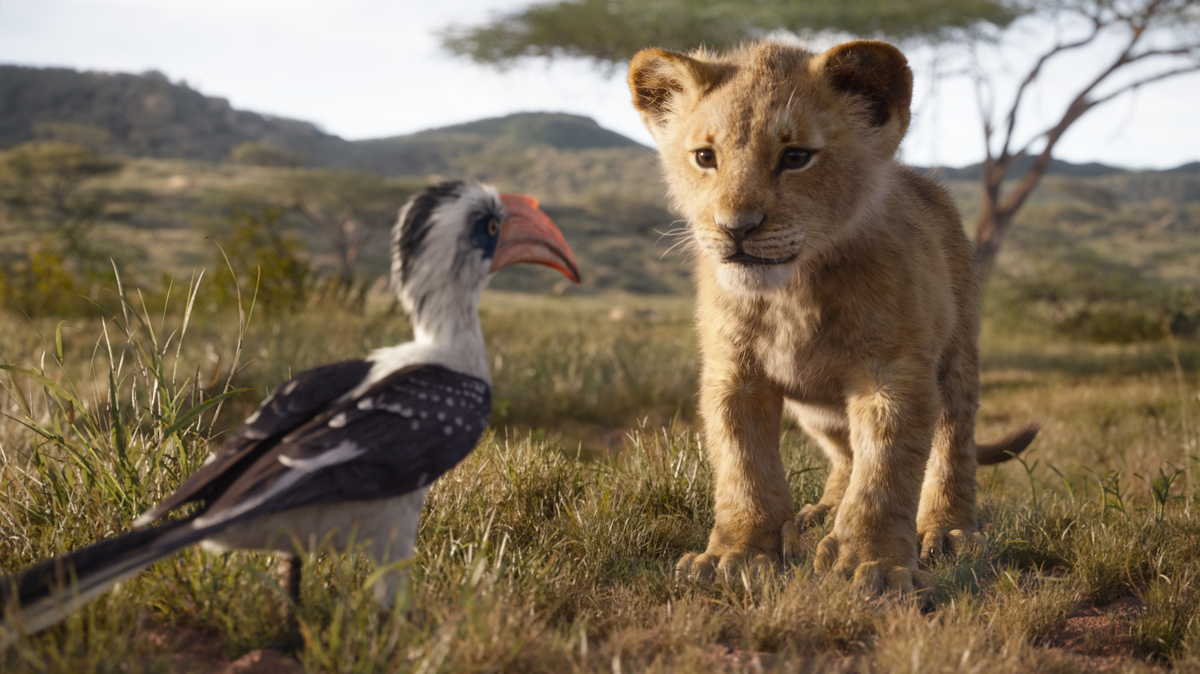 A sophisticated mix of digital imagery and virtual-reality techniques give Disney's Lion King remake the feel of a live-action film. The result plays like a Hollywood blockbuster disguised as a National Geographic documentary.

The best scene in Disney's incredibly photo-realistic remake of The Lion King features a computer-generated beetle rolling a ball of computer-generated dung across a computer-generated African landscape. It might sound mundane, but this particular ball of dung is carrying a tuft of fur from the runaway lion Simba, and its eventual discovery will renew hope that the rightful king of the savanna is alive and well. It's a funny, touching reminder that in the circle of life, every little creature and every lump of waste has an important role to play.

The best thing about this scene is that it's completely wordless, and it convinced me that this Lion King would have been far better as a silent movie, one that treated its newfangled visual style as more than just a digital face-lift. But that wouldn't have suited Disney's game plan: to produce an essentially risk-free remake of the 1994 animated film that remains one of its all-time greatest hits.

The Hamlet-inspired plot is nearly identical to the original. So are Elton John's memorable songs and Tim Rice's less memorable lyrics, this time sung by a solid voice cast that includes Donald Glover, John Oliver and Beyoncé. (The soundtrack also includes a new Beyoncé song called "Spirit.") The crucial difference is that, instead of the original's gorgeous hand-drawn visuals, the new movie looks and feels like live-action, an illusion achieved through a sophisticated mix of digital imagery and virtual-reality techniques.

The movie feels both overwhelmed by its technical virtuosity and shackled by its fidelity to the source material.

The result plays like a Hollywood blockbuster disguised as a National Geographic documentary, or perhaps the world's most expensive safari-themed karaoke video. The movie feels both overwhelmed by its technical virtuosity and shackled by its fidelity to the source material. It begins with a nearly shot-for-shot re-creation of the first film's famous opening sequence: The sun rises over the landscape; the lush, soaring melody of "Circle of Life" rings out; and some very persuasive-looking elephants, zebras, giraffes and other critters gather to celebrate the birth of Simba, an adorable little cub destined to succeed his father, Mufasa, as king of the Pride Lands.

As shot by the cinematographer Caleb Deschanel, it's a majestic, if redundant, sequence, a sign that we've seen this all before. Then the familiar plot kicks in, the characters start talking and singing, and your sense of wonderment may turn to confusion. The animals' lips may match their dialogue, but there's next to nothing going on behind the eyes: Who knew photo-realistic lions were this bad at emoting? You can't fault the actors: James Earl Jones, who voiced Mufasa in the earlier film, reprises that role here with his signature gravity. And Chiwetel Ejiofor strikes the right note of menace as Mufasa's brother Scar, who plots to kill both father and son by luring the unsuspecting Simba down into a gorge, placing him directly in the path of a wildebeest stampede.

Within minutes, Mufasa is dead and a heartbroken Simba is on the run, leaving Scar and his vicious hyena allies to take over the savanna. At this point, the movie shifts abruptly into zany comedy mode, as Simba befriends the amiably loud-mouthed duo of Timon the meerkat and Pumbaa the warthog. They're voiced by Billy Eichner and Seth Rogen, and their energetic banter and their performance of that classic slacker anthem "Hakuna Matata" — it means "no worries" — give the story an undeniable lift.

Laughing at this movie is a lot easier than taking it seriously. Soon the grown-up Simba, now voiced by Donald Glover, is reunited with his childhood friend Nala, played by Beyoncé. But when they launch into "Can You Feel the Love Tonight," not even the actors' lovely voices can bring these lions' dead-eyed come-hither expressions to life.

I've never been the biggest fan of the original Lion King, which beneath its brightly entertaining surface has always struck me as too emotionally calculated by half. But that film feels like a triumph of form and content next to this movie, because its story about a fictional animal kingdom feels so vividly and gloriously cartoonish in every detail. The new Lion King is so realistic-looking that, paradoxically, you can't believe a moment of it. And although it was directed by Jon Favreau, who previously shepherded a wild menagerie in his recent remake of The Jungle Book, it has none of the imagination that made that movie more than just a high-tech retread.

Disney is in the midst of an ongoing campaign to update its beloved animated classics for a new generation, from the recent Dumbo and Aladdin to upcoming versions of Mulan and The Little Mermaid. Some of these remakes have been more inspired than others, but few have felt quite as futile as The Lion King. This isn't the circle of life; it's more like a creative dead end.