Accessibility links
Cohen Spoke With Trump As They, Aides, Sealed Hush Money Deal In 2016 Official records describe Trump's direct involvement with negotiations that led to a $130,000 payment to an adult film star to buy her silence about her alleged extramarital affair with Trump. 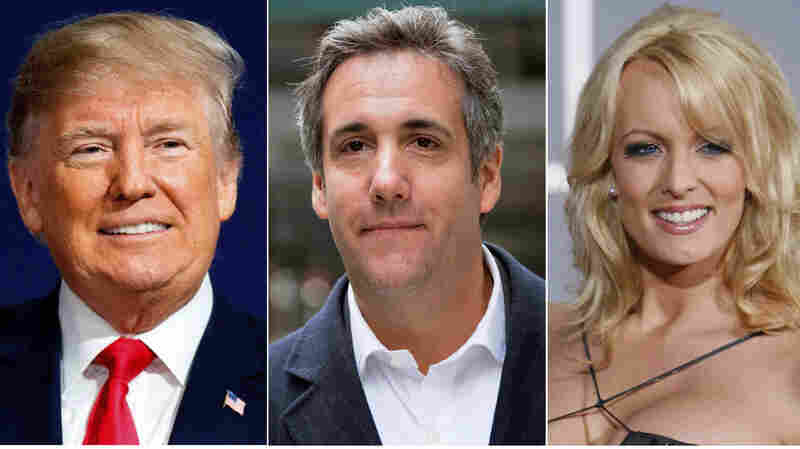 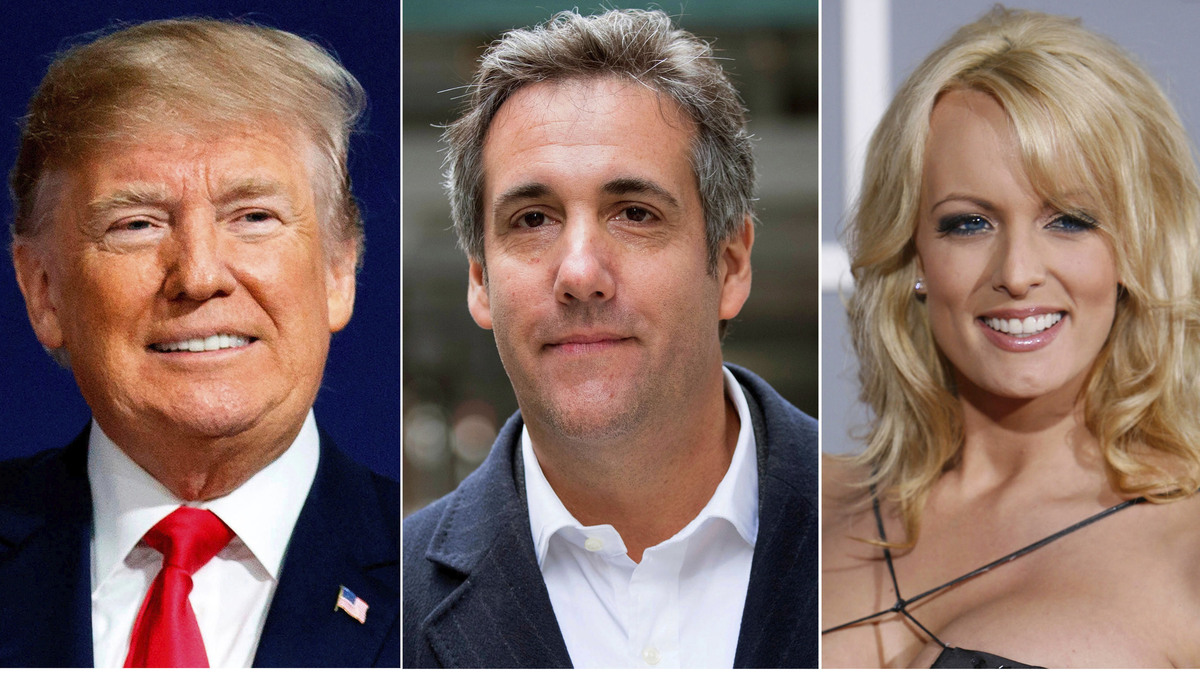 Donald Trump took part in phone calls with his then-personal lawyer Michael Cohen as the attorney and other aides scrambled to arrange hush payments to a woman in 2016 to buy her silence about an alleged sexual relationship with Trump.

Those details come from hundreds of pages of court papers — warrant applications, affidavits and other related materials — made public on Thursday.

Federal Judge William Pauley of the Southern District of New York ordered the documents unsealed after prosecutors said they had concluded their investigation into the scheme and any related campaign finance violations.

Cohen has said that he made the payments in coordination with and at the direction of Trump. Cohen is now serving a three-year prison sentence after he admitted to that and other crimes in court.

Cohen remains the only person to be charged in connection with the payments, although two individuals struck nonprosecution agreements with the government in exchange for their testimony.

While many details about the payments already have been public, the court records released Thursday provide a behind-the-scenes look into how Cohen worked with executives from American Media Inc., the publisher of the National Enquirer tabloid, to make them happen — and prevent news of Trump's alleged extramarital affairs from getting out ahead of Election Day.

Team Trump was particularly desperate to keep a lid on the alleged affairs after news broke of the Access Hollywood tape, in which Trump uses crude language about touching women.

One section of a warrant application filed in April 2018 states that Cohen exchanged a series of calls, text messages and emails with Trump, Clifford's lawyer, Keith Davidson, AMI's David Pecker and Dylan Howard, as well as Trump campaign press secretary Hope Hicks in the days after the Access Hollywood tape appeared.

"Based on the timing of these calls, and the content of the text messages and emails, I believe that at least some of the communications concerned the need to prevent Clifford from going public, particularly in the wake of the Access Hollywood story," the FBI agent wrote in an affidavit supporting the warrant.

The agent then details a flurry of calls on Oct. 8, 2016 — one day after the Access Hollywood tape was revealed in The Washington Post. At around 7:20 p.m., the agent's affidavit says, Cohen received a call from Hicks.

"Sixteen seconds into the call, Trump joined the call, and the call continued for over four minutes," it says.

The documents then describe a string of calls over the next hour that Cohen made to Hicks, Pecker, Howard and, again, Trump.

"At 8:03 p.m., about three minutes after ending his call with Pecker, Cohen called Trump, and they spoke for nearly eight minutes," the papers say.

After two more quick calls with Howard, Cohen received a text message from Howard that read: "Keith will do it. Let's reconvene tomorrow," referring to Clifford's lawyer, Davidson.

In the days and weeks that followed, the agreement almost unraveled after Cohen failed to transfer the money. He was then left scrambling to finalize the deal in late October.

On the morning of Oct. 26, Cohen spoke with Trump twice over the phone. That same morning, Cohen set up a bank account for a shell company he had established earlier that month, Essential Consultants LLC, and transferred funds into the account from a home equity line of credit that he had open at the same bank.

The following day, Cohen transferred $130,000 to Clifford, care of Davidson, to buy her silence about her alleged extramarital affair with Trump.

Trump then repaid Cohen via a series of checks drawn from accounts he controlled or that were controlled by his business; Cohen revealed copies of some of the checks to Congress in March.

AMI, meanwhile, also has admitted arranging a separate payment to McDougal in a so-called "catch-and-kill" arrangement to keep her quiet about her alleged relationship with Trump.

End to the investigation?

Another document unsealed on Thursday was a July 15, 2019, letter to Judge Pauley from prosecutors.

They write that they have "effectively concluded" their investigations into whether anyone besides Cohen may also be criminally liable for the campaign finance violations, as well as whether certain individuals lied to investigators.

After news broke Wednesday that the probe had ended, Trump's personal lawyer, Jay Sekulow, said in a statement that "we have maintained from the outset that the president never engaged in any campaign finance violation."

On Thursday, Cohen's lawyer, Lanny Davis, responded with a statement of his own.

"I challenge Jay Sekulow, who issued a misleading and false statement to answer the following two questions: Is it not a fact that SDNY prosecutors found President Trump to have 'directly and coordinated' the commission of a felony involving campaign finance federal laws? Is it not also a fact that upon his loss of purported immunity as president of the United States, he is subject to arrest, incarceration and a trial?"