Accessibility links
Refinery Explosions Raise New Warnings About Deadly Chemical Chemical experts say recent refinery explosions could have been far more devastating if deadly hydrogen fluoride was released. Some are calling for a ban on the chemical. 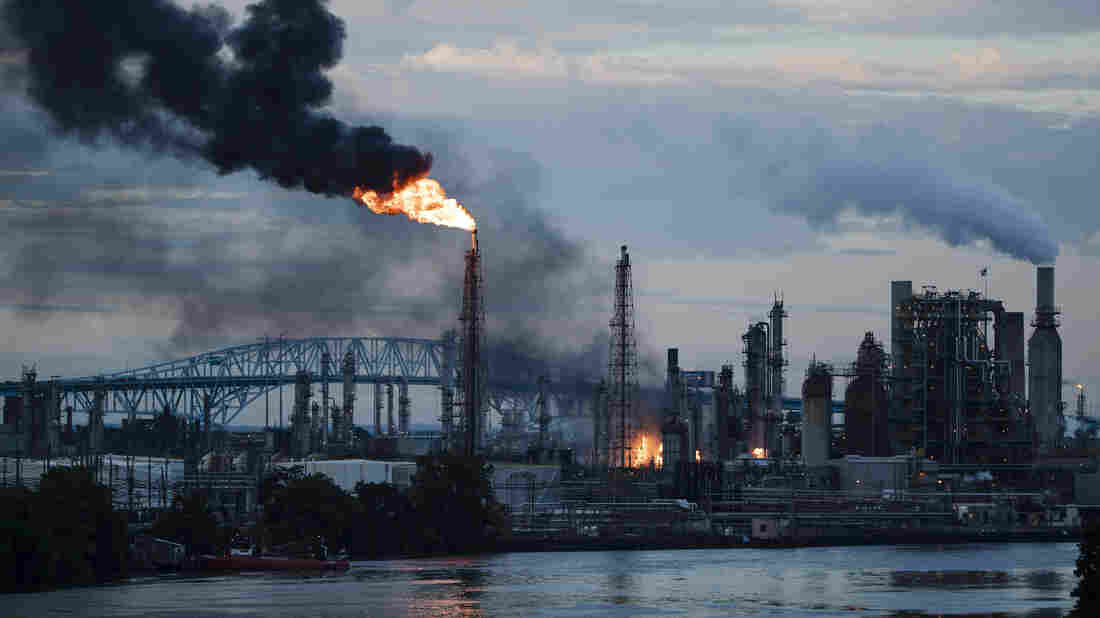 Flames and smoke emerge from the Philadelphia Energy Solutions refinery in Philadelphia on June 21. Experts say the explosions could have been far more devastating if deadly hydrogen fluoride had been released. Matt Rourke/AP hide caption 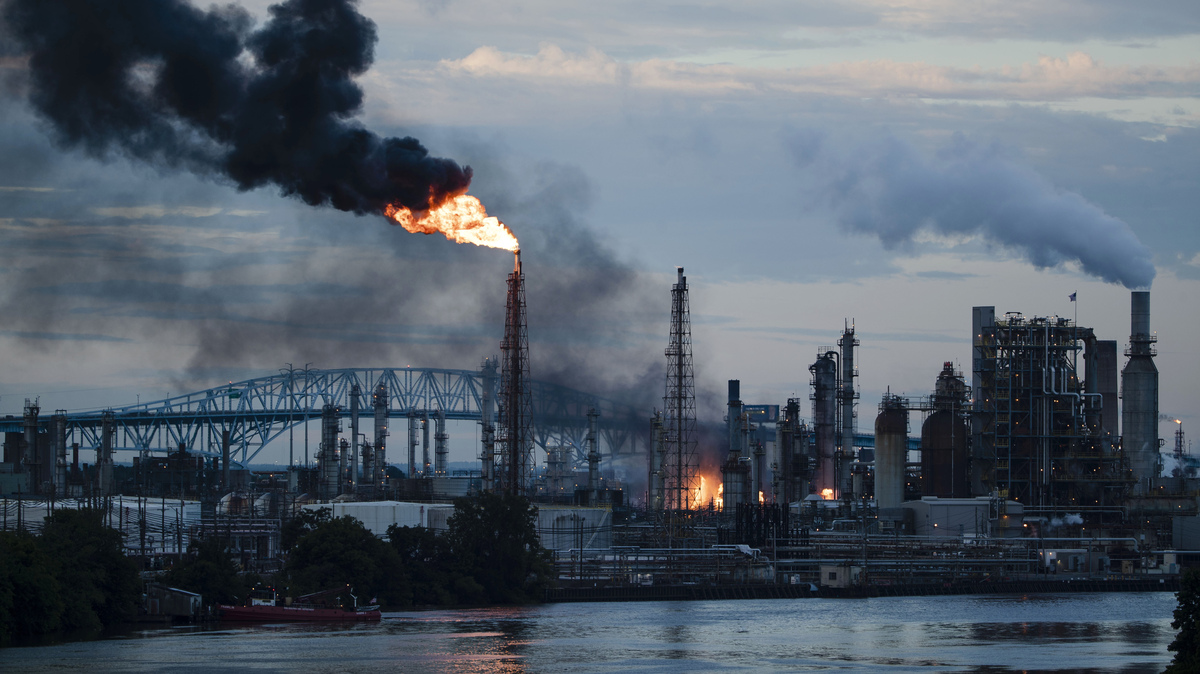 Flames and smoke emerge from the Philadelphia Energy Solutions refinery in Philadelphia on June 21. Experts say the explosions could have been far more devastating if deadly hydrogen fluoride had been released.

In the predawn hours of June 21, explosions at the Philadelphia Energy Solutions refinery in South Philadelphia shook houses, sent fireballs into the air and woke up nearby residents.

"Three loud explosions, one after the other, boom, boom boom!" says David Masur, who lives about two miles from the plant and has two young kids. "It's a little nerve-wracking."

Masur watched as the refinery spewed black smoke above the city, easily visible from his home. But what he didn't know at the time was just how close he and his family came to getting exposed to hydrogen fluoride, one of the deadliest chemicals used by refiners and other industrial manufacturers.

Philadelphia Energy Solutions knows that's a possibility. Its worst-case disaster scenario includes 143,262 pounds of hydrogen fluoride released over 10 minutes, which could travel as a toxic cloud for more than 7 miles and impact more than a million people, including in schools, homes, hospitals, prisons, playgrounds, parks and a wildlife sanctuary.

City, state and federal officials say none of the air monitors in or around the refinery — or the air samples collected by the city's health department — detected the chemical, often referred to as HF. And a spokeswoman for Philadelphia Energy Solutions says no workers were exposed.

The explosion destroyed the refinery's alkylation unit, where crude oil is converted to high octane gas, and led to the planned closure of the financially troubled plant.

But two other refineries in the Philadelphia region also use HF, as do some four dozen around the country. The Philadelphia explosions, along with similar accidents in the past four years, are reviving concerns about inadequate safety measures and calls to end the use of the deadly chemical.

A string of 'near misses'

A 2013 report released by the United Steelworkers, the union that represents refinery workers, warned that facilities using HF don't have adequate safety measures in place and are unprepared for a release. It said this puts 12,000 workers and 13 million residents at risk of exposure, including in major metropolitan areas like Houston, Memphis and Salt Lake City.

It also pointed to 131 "HF-related incidents or near misses" in the three years preceding the publication of the report and called for phasing out the use of hydrogen fluoride.

For those who know deeply about the dangers of HF, the news of the PES refinery explosion struck a terrifying chord that echoed beyond the clouds of black smoke visible to TV viewers nationwide.

"Don't look at it and say, 'Man, a nuclear bomb went off and nothing was released, so that must mean it's safe,'" says engineer and activist Sally Hayati. "No, that just means the fortuitous outcome of this just happened to be such that it wasn't released. You could have had tens of thousands of people die."

Hayati lives near a refinery in suburban Los Angeles and is active with the Torrance Refinery Action Alliance. In 2015, at what was then the ExxonMobil refinery in Torrance, an explosion sent an 80,000 pound piece of equipment flying and it landed just a few feet from a tank full of HF.

Hayati says a release of HF from the Torrance facility, like the refineries in the Philadelphia area, would be difficult to flee. "There's no place to evacuate to, and there would be no time," she says.

The Chemical Safety Board, an independent federal agency that investigated the incident in Torrance, criticized ExxonMobil's outdated equipment and poor safety procedures. ExxonMobil said it followed "stringent safety measures," and there was no evidence that the explosion posed a risk to the community. The refinery is now owned by PBF Energy.

Hayati says her group is pushing to ban HF, but industry opposes the effort.

People should never have been allowed to live this close to these refineries. It's just unconscionable to have allowed that to happen.

A toxic cloud at a Nevada test site

The definitive experiment on the release of hydrofluoric acid was done back in 1986, and it did not go well.

The oil company Amoco requested the test. It was building a refinery in Texas and hoping to use a system of ponds to help mitigate any leaks of hydrogen fluoride.

Ron Koopman conducted the experiment. He's a physicist and expert on chemical safety, and worked as a researcher at the Lawrence Livermore National Laboratory for 36 years. He says when about 1,000 gallons of HF were released in the Nevada desert test site, the results were shocking.

The HF turned into an expanding vapor cloud. A terrifying video of the experiment shows white billowing clouds of the toxin getting larger and moving rapidly along the ground. Koopman says deadly concentrations of HF traveled for miles.

"How many times do we try this before we actually get a release that kills 1,000 people?" Koopman said in an interview with NPR. "People should never have been allowed to live this close to these refineries. It's just unconscionable to have allowed that to happen."

Koopman says those exposed to HF die a horrible death. The chemical penetrates the skin and reacts with calcium in bones. Swallowing just a small amount, or getting small splashes on the skin, can be fatal, according to the Centers for Disease Control and Prevention. In its gaseous state, the CDC says low levels can irritate the eyes, nose and respiratory tract. Breathing it at high levels "can cause death from an irregular heartbeat or fluid buildup in the lungs."

The best way to mitigate an HF release is to spray water on it. The PES refinery also employed a safety system that quickly drained an impacted tank of HF into an emergency vessel that was on standby. A worker at the plant told The Philadelphia Inquirer that's what saved the surrounding community from potentially deadly impacts.

Koopman says so far, it's pure luck that there haven't been more fatalities from HF releases. He thinks that's because most of the releases were caused by explosions or fires, which force the HF above ground level, where it can mix with air and reduce the hazard. In such a case, Koopman says, it's possible HF could be released but not measured by any monitors near the ground.

The Environmental Protection Agency requires refineries to file worst-case scenarios for the release of toxic chemicals as part of their risk management plans. But it's not easy for nearby residents to find out what they are. The plans are technically public information but are only available to view at 10 regional EPA offices across the country (including one in Philadelphia), and the agency does not allow the plans to be photocopied.

Just two months before the South Philadelphia explosion, the Chemical Safety Board, an independent federal agency that has authority to investigate industrial accidents, urged the EPA to review its risk management plans and consider if they are sufficient. The EPA's last study of them was in 1993.

The letter referenced the 2015 Torrance, Calif., explosion, as well as a 2018 explosion and fire at the Husky refinery in Superior, Wis. In that case, debris did not hit the HF storage tanks, but it did puncture a nearby asphalt storage tank. Eleven refinery and contract workers were injured, and parts of the town were evacuated for fear of an HF release.

The mayor of Superior and the mayor of nearby Duluth, Minn., have called on the refinery to stop using HF. Refinery owners point out that of the HF used nationwide, only 2-4% is used in alkylation units.

But Daniel Horowitz, a former managing director at the Chemical Safety Board, says the other uses — including in refrigeration and electronics manufacturing— don't store as much HF on site, and they're not in such close proximity to highly flammable hydrocarbons.

The Obama administration boosted protections around the accidental release of toxic chemicals and emergency response. President Trump's EPA tried to delay that, and then in 2018 proposed rolling back some parts of the rule, including the requirement for industry to assess safer alternatives.

The industry defends its use of hydrogen fluoride.

The American Petroleum Institute says HF has been used safely since World War II, with minimum off-site impacts and no off-site fatalities. API spokesman Scott Lauermann says the industry's top priority is protecting the health and safety of employees and communities.

"In addition to oversight from multiple government agencies, refineries also adhere to strict operational standards designed to further mitigate risk and assure safe operations," he said in a statement.

About 50 refineries across the country do not use HF in their alkylation units, but instead use sulfuric acid. That's considered safer because if released, it will pool as a liquid at ground level. But it's expensive for refineries to convert from HF to sulfuric acid.

But Honeywell is also developing another possible alternative to HF, which it calls ISOALKY, that could be used in newly built refineries. A Chinese company recently announced it would use it. One advantage, according to Honeywell, is that the ionic liquid catalyst has zero vapor pressure, so a leak would result in the liquid simply pooling on the ground.

Several state and federal agencies continue to investigate what happened at the Philadelphia refinery, but the results could take months. Kristen Kulinowski, the Chemical Safety Board's interim executive authority, says the board will also investigate. It wants to know whether "there was a potential for release of HF," she says, "and the changes that need to happen to prevent this from happening again."

For nearby residents like David Masur, it was a wake-up call. Some people got a text message from the city's emergency management office telling them to shelter in place, but Masur says he lives two blocks too far from the plant for that warning.

He's not sure huddling in the basement with duct tape on "every single crack or crevice" is the best option. But he's also not sure about the alternative.