Accessibility links
25 Years After Scoring 'The Lion King,' Hans Zimmer Returns To Pride Rock Twenty five years after he scored the original The Lion King, which won an Oscar, Hans Zimmer returns to Pride Rock to revisit the classic musical themes for a re-imagined tale. 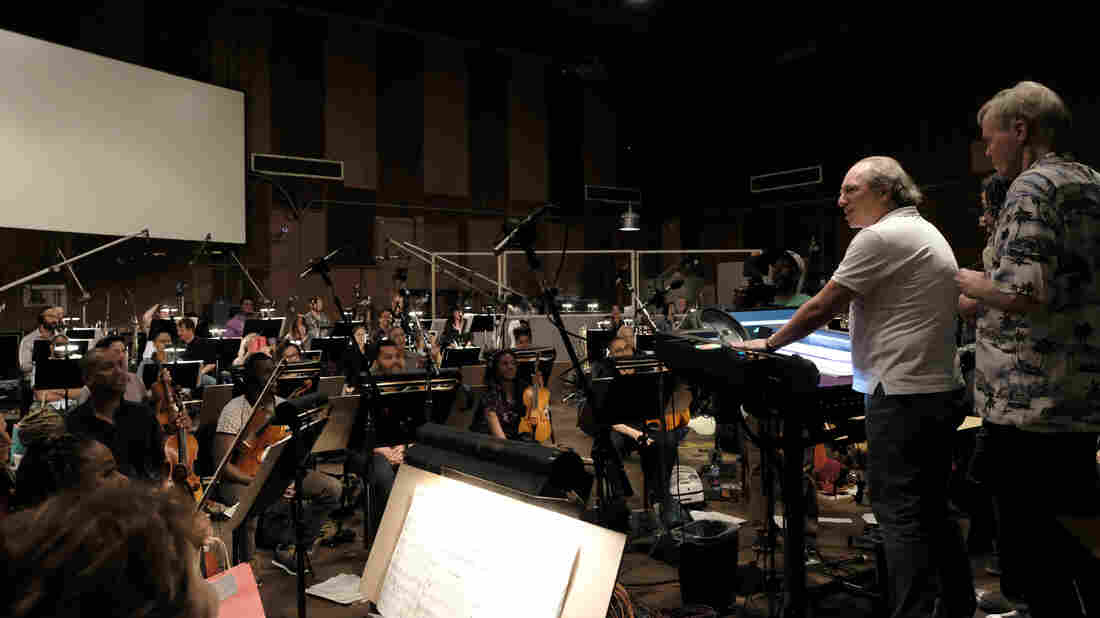 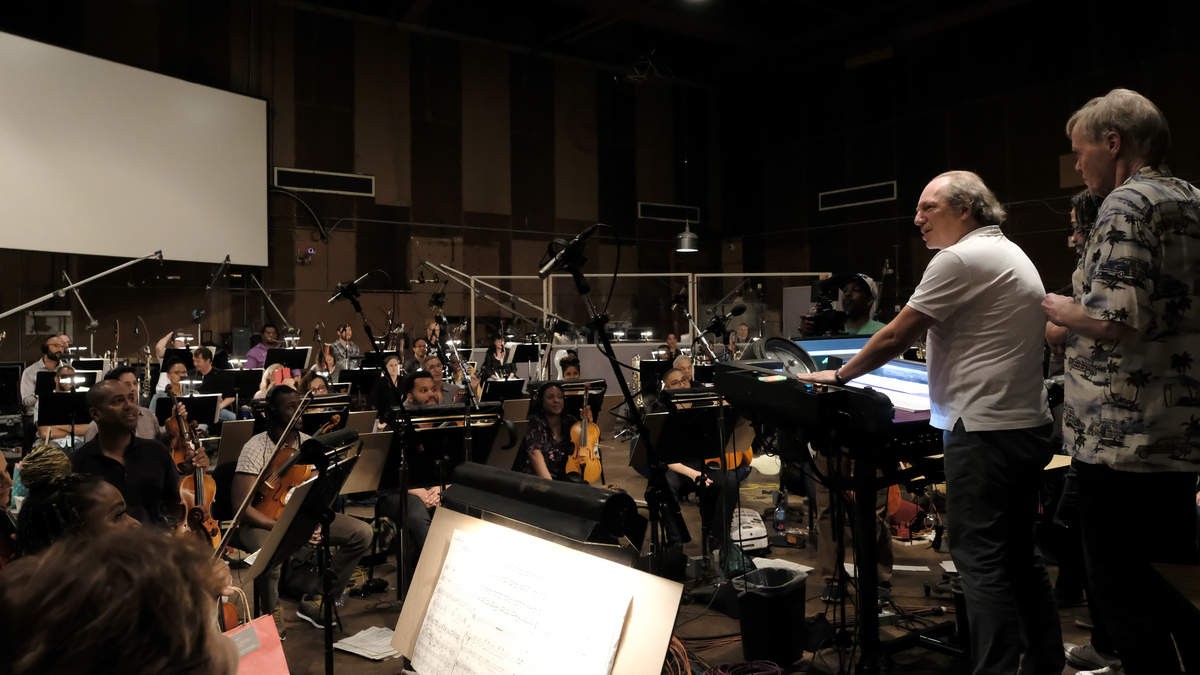 Hans Zimmer, Matt Jones of the Re-Collective Orchestra and conductor Nick Glennie-Smith at a scoring session for Disney's The Lion King.

Ready for more Disney déjà vu? The Lion King is the latest software update to one of Disney's beloved animated movies, this time featuring photo-realistic graphics — and Beyoncé. The musical performances are all new, but it's the same classic songs by Elton John and Tim Rice, and composer Hans Zimmer also returned to Pride Rock with an upgraded version of his Oscar-winning score from 25 years ago.

"I didn't even know anything about the movie," Lebo M. says. "I just knew it had something to do with a conflict between a father and a brother, that has a son in it. No detail."

Lebo M. fled apartheid-era South Africa in 1979 when he was 16. He eventually moved to L.A. in hopes of being a superstar — but ended up living on Skid Row. A few years later, he was working as a coffee gopher at the studio of Hilton Rosenthal, producer for the late Johnny Clegg. Zimmer stopped by one day and was impressed by Lebo M.'s untapped musical talents, and hired him to write and arrange vocals for the 1992 film, The Power of One.

Not long after, Zimmer called him again to help bring some authentic Africana to this animated movie about lions.

"I noticed the image of Mufasa," Lebo M. says. "And my entire system went to: What happens when an important person in my country, my culture, walks in? What happens when a king walks in? The musicology of my thought became [sings] 'Nants' Ingonyama!' — that then translates to 'All hail the king. All bow down in the presence of the king.'"

Lebo ended up contributing several vocals and vocal arrangements to both the songs and score for The Lion King, which came to feel very personal. "I am the Simba at this point, who grows up in exile," he says. "I don't go back home to take over a country, but I go back home a professional. And Mufasa, to me, becomes immediately the image of Nelson Mandela."

That's some heavy subtext for a Disney cartoon — but there's a seriousness that anchors the whole score. Zimmer, who at the time was best known for grown-up movies like Rain Man and Backdraft, originally took the job for two reasons. First, he says: "I didn't like Disney musicals. And they were going, 'Great, that's exactly what we want! We don't want somebody who wants to do what we did before.'"

The other reason was for his little girl, Annabel.

"It wasn't for my daughter!" he clarifies. "It was for her dad. 'Cause every dad wants to show off. And I couldn't take her to see True Romance or something — like a shootout or whatever. I thought, 'Oh, no, this'll be good — it'll be a cartoon, it'll be funny, it'll be harmless. It's about fuzzy animals.' And I didn't realize it was profoundly going to go and hit me in a really hard way... because my dad died when I was 6 years old — which was her age." (In The Lion King, Mufasa — the king of Pride Rock — tragically dies while saving his son, Simba, from a wildebeest stampede. The rest of the movie follows how Simba deals with that.)

"There I was," Zimmer says, "And the only thing I could [do] was to open those deep and dark boxes, and let all the darkness out. And so, weirdly, the score is pretty epic and pretty big for a movie about small, fuzzy animals."

Zimmer says his "gift" to the original filmmaking team was insisting to them that "the emotions are the emotions."

"Don't ever talk down to the children," he remembers saying. "They'll catch you at it. Be sincere, be absolutely genuine, be absolutely legitimate about this. Let's not make things easier. Let's not be funny for, like, the wrong reasons. At the same time, you know, the genius of the film is that you go from death of the father to fart jokes."

Zimmer won his first — and to date, only — Oscar for the score.

When Disney and director Jon Favreau asked him to score their hyper-realistic 2019 remake, Zimmer knew he wanted a fresh way to revamp the music. That's when he saw a video online of the Re-Collective Orchestra, an all-black ensemble founded by Stephanie Matthews and Matt Jones. They formed last year to record Jones' arrangement of the track "All the Stars" from Black Panther.

"We were really inspired by Black Panther," Matthews says, "and so when the film came out, we decided to kind of do a concept piece: 'What would the orchestra of Wakanda look like?'"

Matthews, a session violinist and strings contractor, first met Zimmer in 2014 when she accompanied Pharrell Williams on Saturday Night Live — but she was shocked when he emailed her saying he'd seen the video and wanted Re-Collective to play on the new Lion King.

"He was really, really passionate about the diversity and representation of having these musicians collaborate with the LA session musicians who are extraordinary players," Matthews says, "And just elevate the level of this project."

Zimmer's new Lion King score was recorded at Sony Studios in April. Many present, with decades between them, said it was the most diverse film scoring session ever.

"It's really hard to describe the energy in the room, and what happened on that scoring stage," Matthews says. "I mean, the representation and the diversity, but also the energy and the camaraderie, and then just using this shared language of music to translate and to transform this already super iconic score. It was just... it's hard to put into words."

"I was going for diversity," Zimmer says. "And then, as soon as everybody started playing and sitting next to each other, it became this amazing thing — which wasn't diversity at all. It was unity."