Accessibility links
Trump's 'Go Back' Rhetoric Another Sign Racial Divide Will Define 2020 President Trump has used white grievance to fuel his candidacy since he first came onto the political scene. So what he's doing now with four congresswomen of color is hardly a surprise. 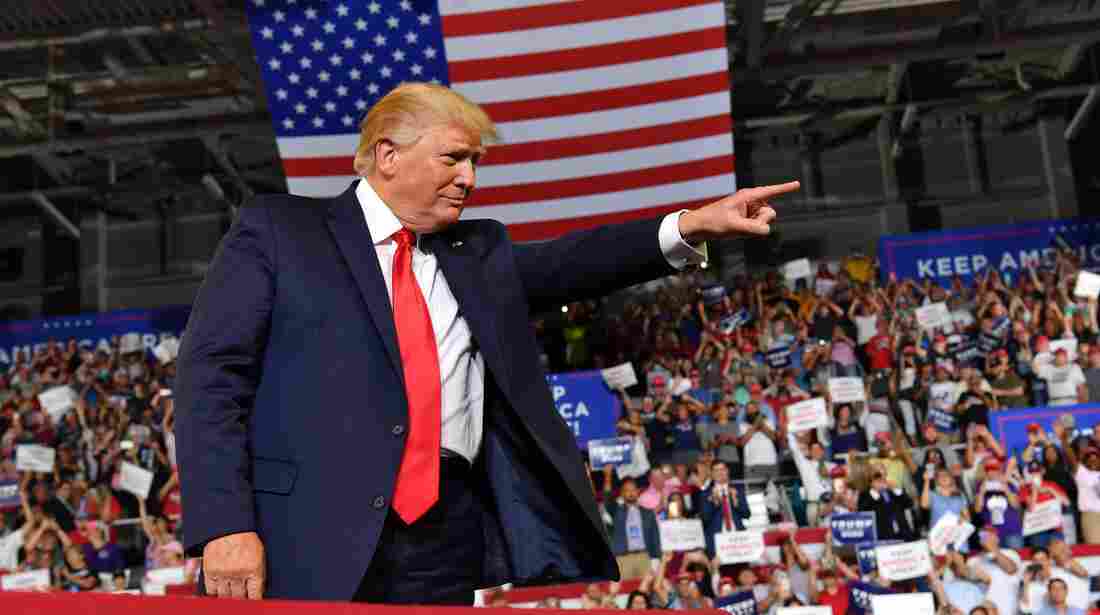 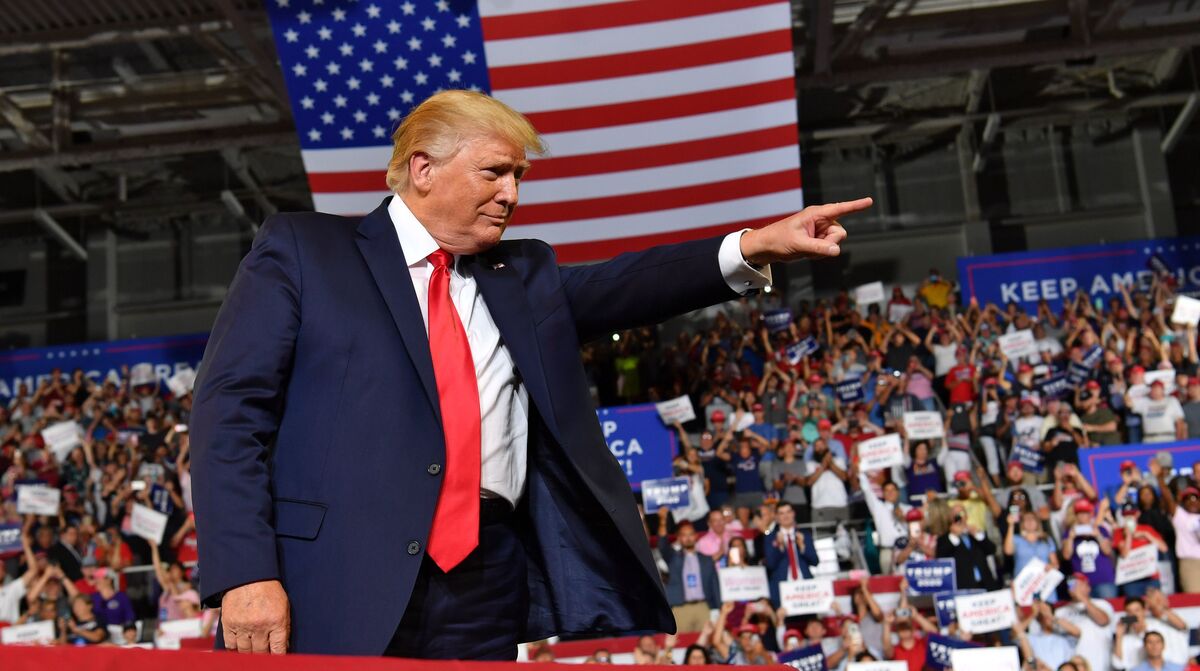 President Trump continued his attacks on members of Congress during a campaign rally in Greenville, N.C., Wednesday night.

The racist rhetoric from President Trump attacking four freshmen Democratic women, who he tweeted should "go back" to their countries of origin, escalated Wednesday night at his campaign rally in North Carolina.

"Send her back," the crowd chanted, during a riff in which the president criticized Democratic Rep. Ilhan Omar, a Somali-born American citizen from Minnesota.

The president stood back for about 13 seconds before continuing on with his speech. He did not comment on the chant, which hearkened back to the anti-Hillary Clinton "lock her up" refrain, ubiquitous at 2016 Trump rallies.

On Thursday, Trump said he tried to stop it, that he would try to do so in the future and that he disavows the chant.

"I was not happy with it," he said when asked about it at the White House. "I disagree with it."

But on Friday, Trump seemed to defend his chanting supporters, tweeting, "It is amazing how the Fake News Media became 'crazed' over the chant," but "is totally calm & accepting of the most vile and disgusting statements made by" the congresswomen with whom he has been feuding.

He referred to statements by three of lawmakers in his tweet, but there are four in the group — Omar, Alexandria Ocasio-Cortez of New York, Ayanna Pressley of Massachusetts and Rashida Tlaib of Michigan. All four are U.S. citizens, and three were born in the United States.

What's more, Trump also tweeted twice this week before his rally, "If you are not happy here, you can leave." (Once, he did so in ALL CAPS.) So there appears to be some line of what's acceptable or not in the president's view, but it's relative.

For President Trump, Life Is Just Not Fair — And What That Means For The Rest Of Us

The next time that chant, or one like it, comes up at a rally, will Trump try to stop it? That's unclear but may be beside the point. What's clear is that this week highlighted — once again — that racial division and identity politics are going to be a major factor in the 2020 campaign and will almost certainly overshadow anything else that comes up.

That should come as no surprise. Trump has used white grievance to fuel his political rise — from his role in the birther movement questioning former President Barack Obama's birth in Hawaii to his campaign kickoff when he said Mexico was sending rapists and drugs to the United States to his outsize focus on limiting immigration.

He has used that grievance to sustain him in office — first, instituting a travel ban on people from countries that his administration deemed a threat (originally, they were all majority-Muslim countries), then wanting to require immigrants to "speak English," to now using the go-back-to-where-you-came-from-if-you-don't-like-it line.

And that could be why such a high percentage of Americans strongly disapprove of the job the president is doing. This week's controversy also highlights the challenges the president faces in reelection, as he not only tries to find something to rally his base, but also attempt to plant doubt with independents about the direction Democrats want to take the country.

Why the effort to elevate the four congresswomen?

Trump and his campaign are trying to make the four congresswomen the faces of the Democratic Party.

Why? He knows that their liberal policies are at odds with Democratic leadership and unpopular in swing parts of the country, so Trump is trying to tie them together.

He noted this week that his attack "forced" Democrats to rally around the women.

For Trump, the choice is binary — if you defend the four congresswomen in any way, then you endorse all of their statements and policies. That's a slippery slope, but one Trump's campaign is happy to sled down.

Just hours before Trump said he was "not happy" with the "send her back" chant at his rally, his campaign declined to distance itself from it.

"The Squad, as they call themselves, are now the leaders of the Democrat Party," campaign communications director Tim Murtaugh told NPR's Tamara Keith in a statement when asked whether the campaign would disavow it. "Americans don't like it when elected officials consistently disparage this country. All the Democrats are pushing socialist ideas that are terrible for America. They are all the same."

Trump's tweet about forcing Democrats to defend the four congresswomen and the campaign's initial response to the rally chant make the political strategy plain. Facing reelection, the president hasn't done much to reach out beyond his loyal base of supporters, who still very much support him, but he needs to win over independents. So he's trying to make them think Democrats and their most extreme wing are one and the same while Democratic presidential candidates duke it out in their primary.

In other words, define Trump's eventual opponent as too far left for the country even before there is a nominee.

For much of the two-and-a-half years since Trump became president, independents have tracked with Democrats on many issues (except on the question of whether to begin impeachment proceedings).

That support from independents helped propel Democrats to take back the House in 2018, and independents are especially vital for Republicans to win in presidential elections.

That demonstrates the need, even more so, for Republicans to win independents, who have become a larger share of the electorate – 31% in 2016 versus 26% in 2004.

Trump is personally under water with independents. While he saw his highest quarterly approval rating on average this past quarter, according to Gallup — with an average of about 43% — that's still lower than his percentage of the vote in 2016 (about 46%).

Dragging him down? Just 35% of independents approved of the job he's doing. So it's no surprise that Trump is grasping for something to sway them.

The GOP and conservative media have been vilifying Ocasio-Cortez and Omar, in particular – and a poll, leaked by Democrats, showed just how much Democrats don't want them to be the focus. It found that both Ocasio-Cortez and Omar are fairly well known and unpopular with "swing voters," whites without a college degree in swing House districts.

But what else is unpopular with independents and swing voters? Racism, or at least the appearance of it.

That could explain why Rep. Tom Emmer, R-Minn., the head of the committee tasked with electing Republicans to the House, said at a breakfast with reporters Thursday of the chant, "There's no place for that kind of talk. I don't agree with that."

The fact remains that while Democrats are trying to figure out their way forward, Trump also has a lot of work to do to win reelection in 2020.

His campaign is banking on another very close election, one that sees a similar path to his victory in 2016. And remember, that only was decided by 78,000 votes across three Upper Midwest states — and Trump lost the popular vote by 3 million votes.

So strap in. This next election is going to be a turbulent ride for a country whose moral fabric is already being stretched perilously thin.