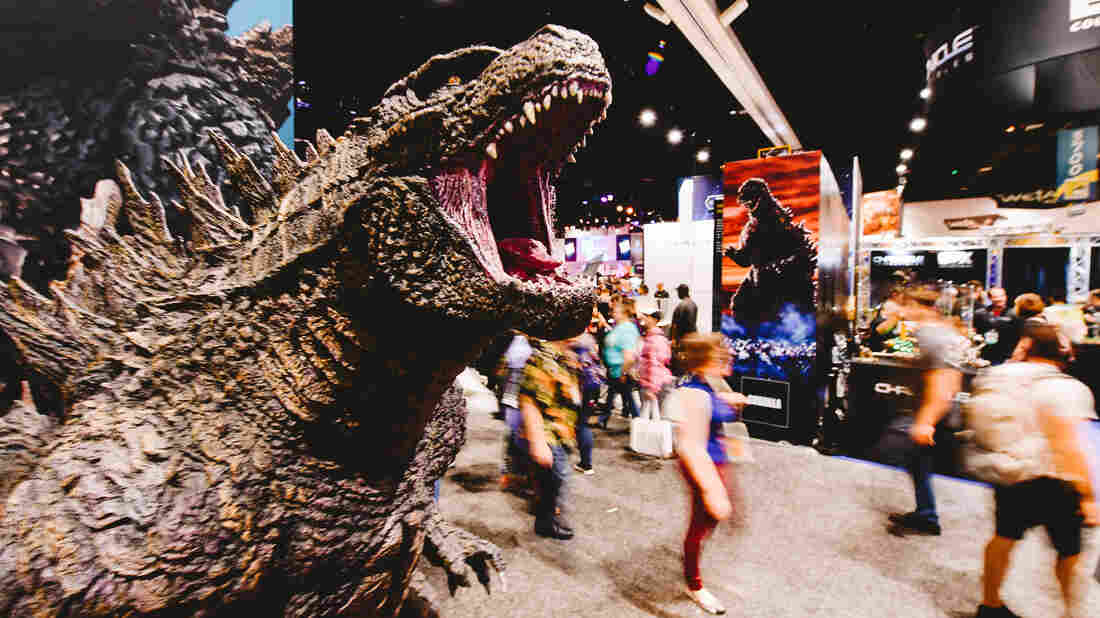 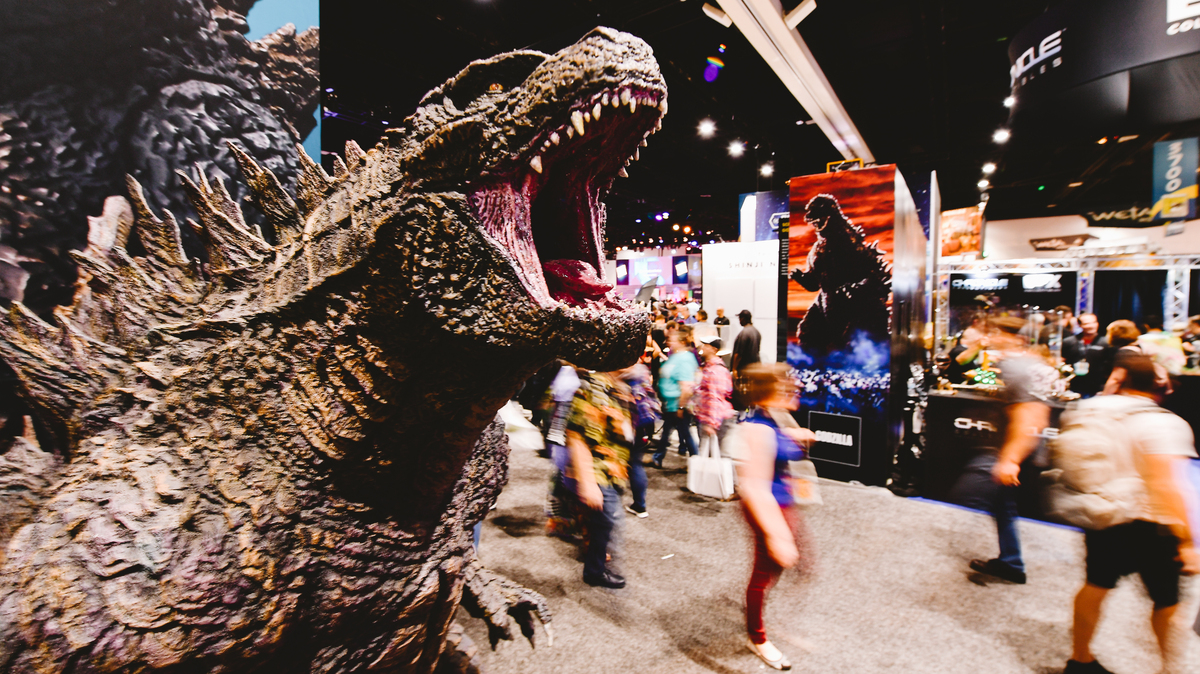 Godzilla — who's celebrating his own 65th birthday this year — watches over convention-goers on preview night at San Diego Comic Con.

A good convention is almost a ritual space — a time and place away from time and place. Once you step through that glass door and swipe your badge, you could be anywhere, anywhen; the hours pass by outside and you don't notice. It's almost as if the rest of the world doesn't exist — you are at Comic-Con. You have always been at Comic-Con. What I'm trying to say, here, is that I've barely been here 24 hours and I already don't know which way is up or really what day it is. Mallory, I hope you're less disoriented than I am.

(Mallory: Nope, I'm equally disoriented. I have barely any idea where I am at any given time.)

Wednesday is usually fairly quiet here. The convention's not officially open yet, although Preview Night starts at 5:30 and almost immediately the show floor is swarmed with fans lining up for autographs and merch; one of my roommates scored an ultra-limited edition resin sculpture of an adorable dumpster fire. (One of only 12 available per day! Ah, the joy of the hunt.)

And of course the real hard-core fans are already lining up for the panels in Hall H, the massive 6500-seater venue where all the really big stuff happens. Official line-camping begins at 6am Wednesday — and I do mean camping; people show up with sleeping bags, coolers, shade tents and portable speakers. I heard a lot of excitement about the Marvel Studios panel on Saturday, but the big draw is Lin-Manuel Miranda, who's here with his castmates in the new HBO adaptation of Philip Pullman's His Dark Materials series. Apparently this is his first Comic-Con — poor guy, I hope he makes it through. 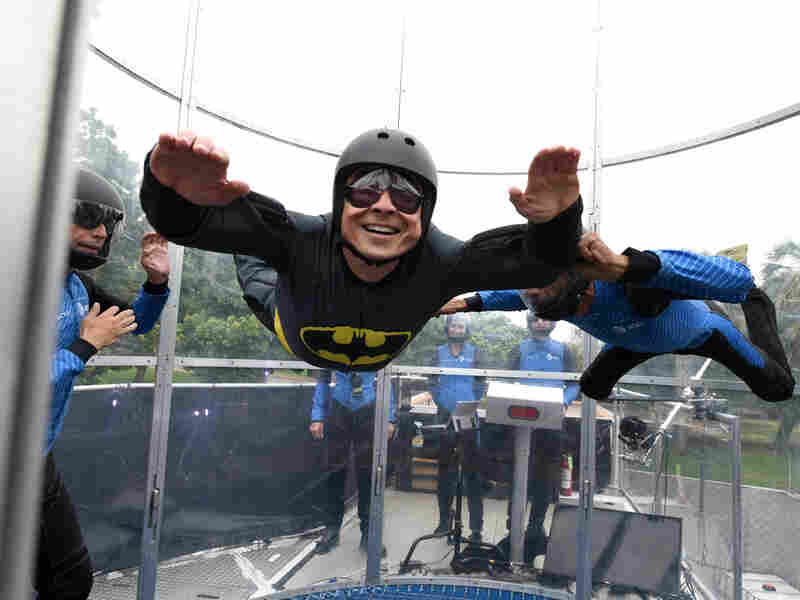 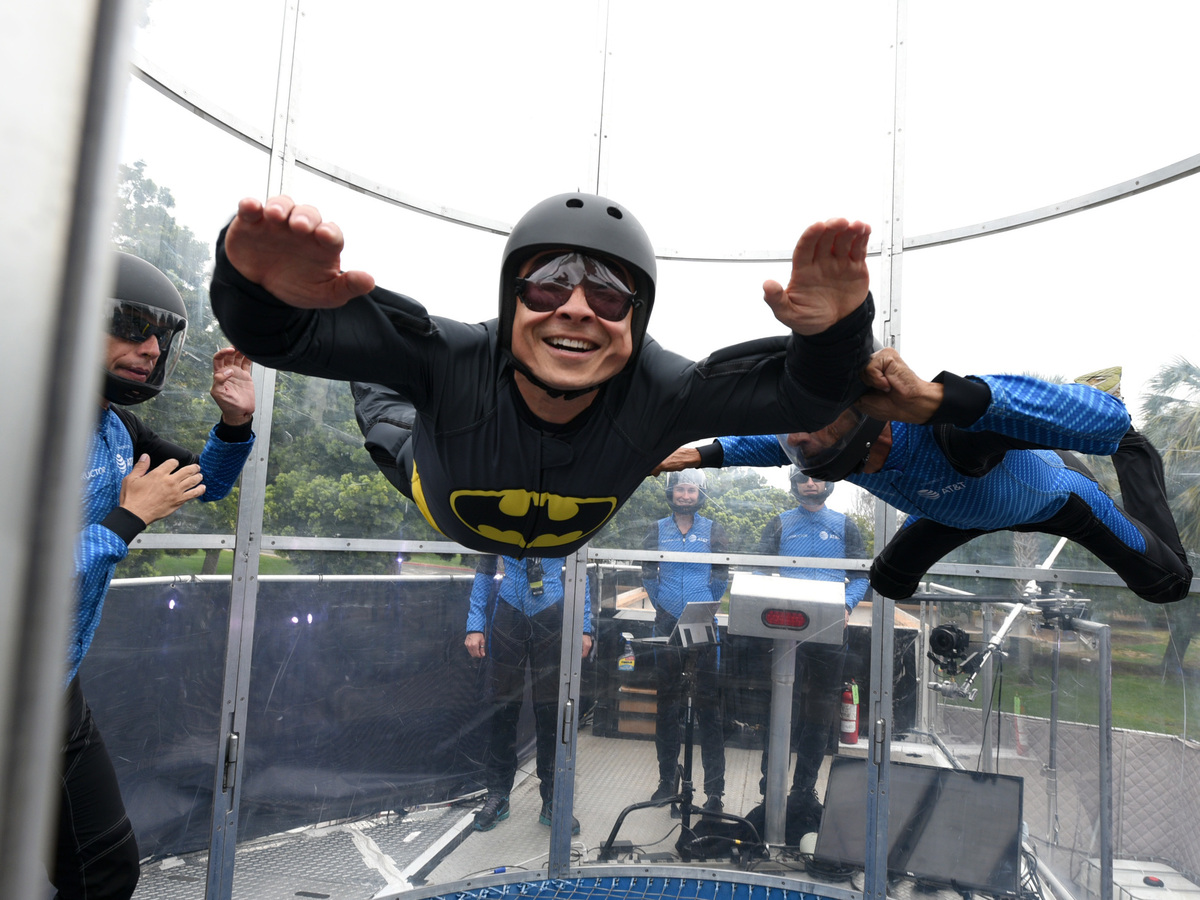 I spent a lot of my Wednesday up at Balboa Park, at the future site of the Comic-Con Museum. Right now it's being used as a massive Batman-themed installation — the Dark Knight himself is the first character to be inducted into the Museum's Character Hall of Fame, and there was a huge celebration complete with a black carpet gala and — possibly the best thing — an indoor skydiving setup where the daring could pull on a Bat-suit and a VR helmet and ride a giant updraft inside a big Plexiglas cylinder. I watched DC Comics publisher Jim Lee try it out but I myself was too chicken to be a Bat.

The Museum itself isn't set to open until May of 2021 but then it'll be open year-round, and during the convention you won't need a badge to get in. Right now you can at least see a taste of what it'll be — I met up with executive director Adam Smith at a temporary exhibit of art from the convention's history. "Deep in the heart of Comic-Con and its culture and its community is an appreciation of comic art, and maybe a feeling that comic at some point in history has been considered second class," he told me, "and we want to present it in a first class environment here, to show the world the comic art is just as valid as anything else." And Smith says it's important to him that people who can't get a convention badge (which gets harder every year) be able to have a little bit of the Comic-Con experience. 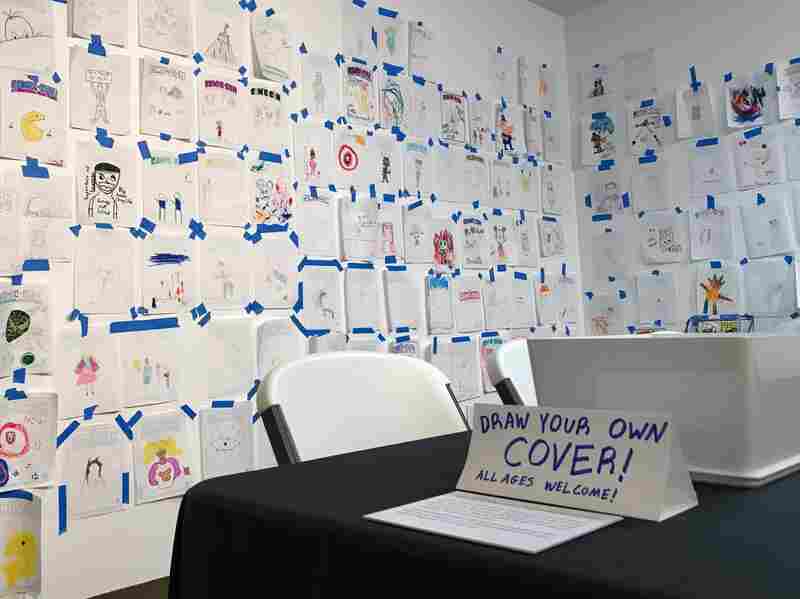 Fans are encouraged to draw their own comics at the temporary Comic-Con Museum space. Petra Mayer/NPR hide caption 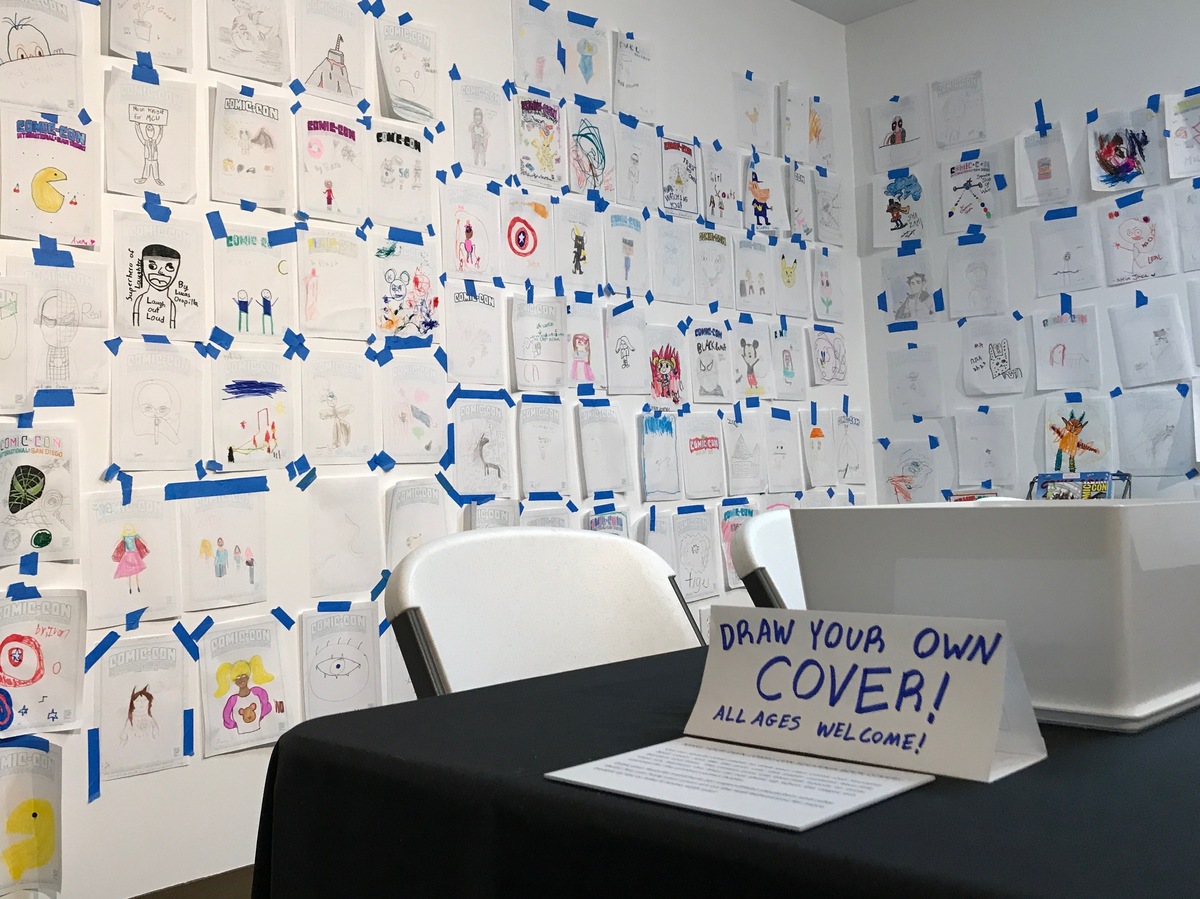 Fans are encouraged to draw their own comics at the temporary Comic-Con Museum space.

The centerpiece of the room is an amazing spread by DC's Jim Lee — who was a comic artist before he was a publisher — showing a host of characters from all different imprints, soaring through the distinctive glass tubes of the San Diego Convention Center, Superman and Batman alongside Black Panther, Spawn and Captain Marvel, among others. Smith calls it a feat of politics as much as artistic skill, "just to get everyone to agree to have their characters in this one place!" The walls are lined with convention program art stretching back to a 1972 piece by the legendary Jack Kirby, who helped create characters like the X-Men and the Hulk, and was a mainstay of the convention in its early years. But I think the coolest part of the temporary exhibit is the wall of drawings from kids who were inspired by the superheroes celebrated here — there's a table with paper and markers and an invitation to create your own comic book cover. (I might go back there later on and try my hand at it.)

Mallory, how's the con going for you so far?

It's going well so far! The first official day of Comic-Con is over, and I'm relieved to find out that going to SDCC is a lot like riding a bike: You might be wobbly and uncomfortable at first, but you get back into the swing of things. I'm trying not to push myself so hard this year because I want to, y'know, have a little fun while I'm at it!

So this year, I'm going to some of the big Hall H panels — including HBO's His Dark Materials. The panel opened, of course, with the trailer for the show — which has already dropped online. And, well, it looks very, very good. The animation and CGI look great, Dafne Keen is convincing as Lyra, and the show features heavyweights like Lin-Manuel Miranda as Lee Scoresby, Ruth Wilson as Mrs. Coulter, and James McAvoy as Lord Asriel. Here's where I confess that I haven't read the books on which the show is based — but I'm checking them out of the library as soon as I get home.

(Petra: WHAT?! You haven't read them yet? I'll lend you my copies. Also, I'm hideously envious that you got to see that panel.)

Lin-Manuel Miranda told the crowd he said "yes" immediately when he heard about the project, even before he knew what part he was going to be playing. "I would have sharpened pencils on set, I love these books," he said. "When my wife and I were dating, we read these books. They were part of our falling-in-love story." The crowd, predictably, awww'ed very loudly.

For Ruth Wilson, the draw was the description of her character as "the cesspit of moral filth and the mother of all evil." Smirking a little, Wilson added "and I thought 'okay, I have to play her.'"

I'd forgotten how much I love hearing actors and producers talk about their craft. It's fun to hear Dafne Keen describe her character as a bit annoying at first, but someone who grows when life hits her in the face, or see her sass Wilson and McAvoy about their nefarious characters. And it's especially fun when actors reveal extra tidbits to look forward to. Like Miranda's Lee Scoresby. "Literally, I come into the show singing a duet with my daemon on a big-ass hot air balloon," Miranda said, sounding like a kid recounting the best day of his life. It's not just being in the same room as actors you admire, it's seeing the passion and the care behind the scenes.

But I haven't just been sitting in a giant convention hall since I got here. On Wednesday, I spent much of the evening doing "activations" around the con — interactive experiences for shows like Brooklyn 99, for which NBC built the precinct in which the show is set. My group filed into a briefing room where we were briefed, as new recruits. Then we split into smaller groups and took a whirlwind tour through "the 99". And, well, I have to admit that it was very cool to be on the "set" of one of my favorite sitcoms. It's all in the little details: a tiny figurine of Cheddar (RIP) on Captain Holt's desk, the ping pong paddle on Jake Peralta's desk, the stack of yogurt on Terry Jefford's. We didn't get too much time to admire the details though, because we were frantically putting shredded papers back together or questioning "perps" in the holding cell. It's about the experience, not the competition, but my team won, so we're the best humans/detectives on earth. Jake Peralta said so.