Accessibility links
San Diego Comic-Con Is Turning 50: Here's Its Origin Story 50 years ago, a bunch of teenaged comics fans got together to plan a convention, and what started with 300 people in a hotel basement became the pop culture juggernaut known as San Diego Comic Con. 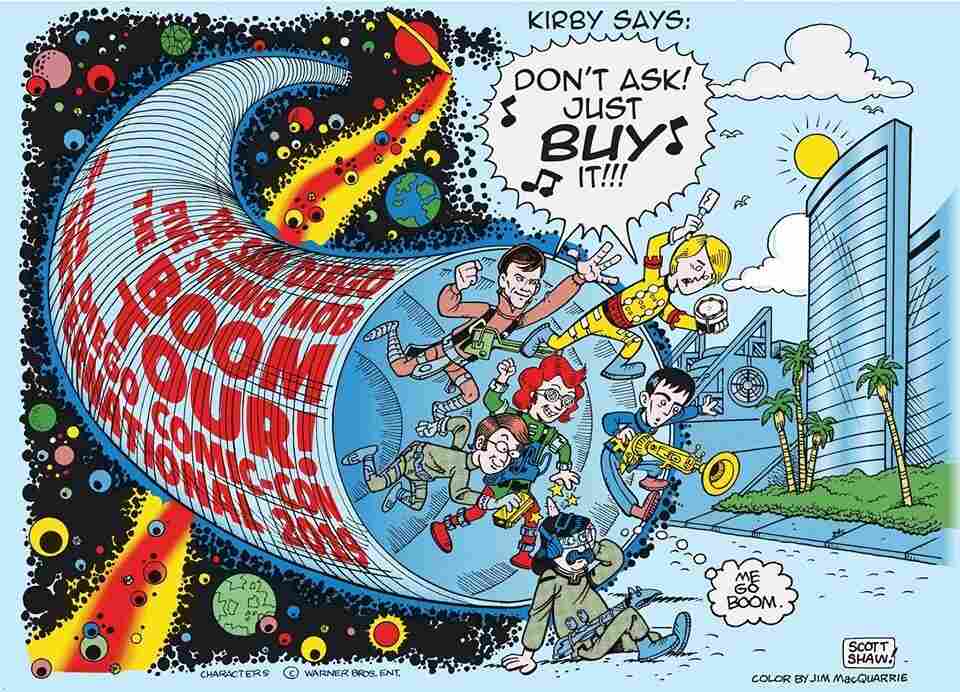 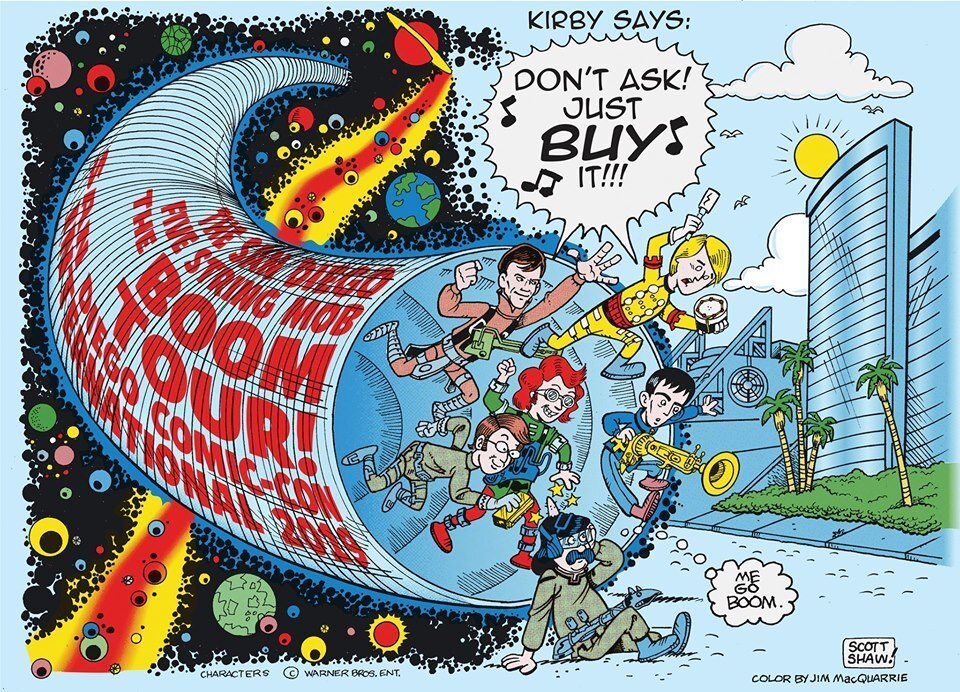 The original San Diego Comic-Con committee, as drawn by Scott Shaw! and inspired by Jack Kirby.

Fifty years ago, a bunch of comics fans in San Diego decided they wanted a way to meet other fans. They were mostly teenagers — okay, and two adults — but what they created became the pop culture phenomenon we know as San Diego Comic-Con.

Today, Roger Freedman is a physics professor, but in 1969 he was 17 years old — and he had no idea what he was about to get himself into. "I think it's fair to say that if you had come to us and said how Comic-Con was going to evolve, we would have said A) what are you smoking, and B) where can we buy some?"

I think it's fair to say that if you had come to us and said how Comic-Con was going to evolve, we would have said A) what are you smoking, and B) where can we buy some?

It all started with a guy named Shel Dorf — one of only two adults involved with that first convention. Dorf had some experience attending and planning conventions, and more importantly, he had connections. He knew Jack Kirby, the legendary co-creator of characters like the X-Men and the Fantastic Four. And Kirby was willing to talk to a bunch of kids.

"I think we thought comic creators lived on some comic book Mount Olympus and couldn't be approached by normal mortals like us," says Mike Towry, who was 14 when he got involved with the convention committee. "And then to find out that we could actually meet them and talk to them one on one, and then have a convention where they would come and we would get to hang out with them was just kind of mind-blowing."

In fact, Kirby ended up drawing the original convention committee into one of his comics. "So Jack Kirby drew six of us San Diego comic fans as characters," Towry says. "We were a futuristic rock band that were secretly the evil minions of Darkseid, and we went up against Superman and we trash talked him, and we took off in our Boom Tube." 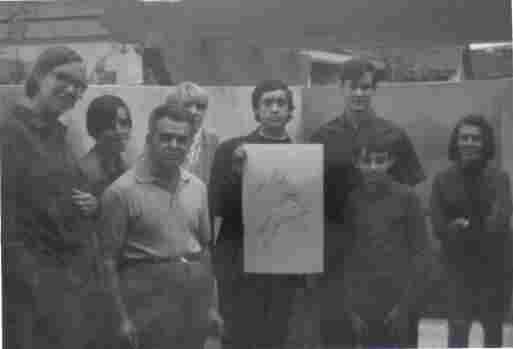 Convention committee members visit Jack Kirby (third from left) at his home in November 1969. Mike Towry is visible in the back, behind Kirby. Courtesy of Mike Towry hide caption

And it was Kirby who came closest to realizing what Comic-Con could be. Towry remembers the con crew's first visit to Kirby's house in Irvine, Calif., late in 1969, and the advice he gave them: "Do it all," Kirby said. "I know that comic fans have also been interested in the movie media, they've been interested in the pulp media, and all that has some value to them. I think they want to see it. I don't think they want to concentrate on comics alone. If you can widen the scope of the convention to include all these, I think you'll have a larger crowd and a more interesting crowd. And I think you'll have a great time."

Standing on the packed show floor of the 50th Comic-Con, it seems like Kirby's vision has been fulfilled. More than 130,000 people are expected to attend this year; they're here for comics, yes, but also for their favorite movies, TV shows, books and toys. It's a far cry from the 300 people who gathered in the basement of San Diego's U.S. Grant Hotel in the summer of 1970, to see Kirby and the equally legendary sci-fi author Ray Bradbury. Scott Shaw! — another member of the original convention committee — was an aspiring cartoonist then, and a professional now. (And yes, that exclamation point is part of his name.)

"It really was just kind of a bunch of tables like this with cardboard boxes with comics," he says. "And I would say, I only know of one woman that showed up, that was a fan of comics. For the most part it was teenage boys." That one woman, he says, was Jackie Estrada.

"I only went for three hours, and it was in the basement of a hotel," she remembers, "and there was Jack Kirby and Ray Bradbury, so for a fan of both of those to go and just hear them talk, I mean, what more could you want?"

Yes, Jackie Estrada is here today. In fact, she's been to every single Comic-Con. These days she even works for the convention, running the annual Will Eisner Comic Industry Awards. And of course, she's far from the only woman at Comic-Con 2019.

"I think the biggest change and the best change is that women are here," says Shaw! And not just women — people of all genders, ethnicities and ages are milling around the show floor today.

But not all the changes have been positive. When a convention gets as big as this one is, you lose something. Jim Lee is publisher and chief creative officer of DC Comics, but he started coming to the con as an artist back in the '80s. "For the first several years we just went to the con, met with fans, went back to the hotel room drew pictures and met with fans," he says. "They would just kind of wander into the rooms all night long, and you'd draw till like 3:00 in the morning, get some sleep and go back to the convention."

Today you have like all of Hollywood here, so you just don't have the stars, but you have agents and managers, and so there's a whole stratification of of the show I think which wasn't there early on.

Lee says he began to notice things changing in the '90s and early 2000s. "And now today you have like all of Hollywood here, so you just don't have the stars, but you have agents and managers, and so there's a whole stratification of of the show I think which wasn't there early on."

Mike Towry missed that easy, anything-goes feel of the early Comic-Cons so much, in fact, that he founded a new convention in 2012, San Diego Comic Fest. (Roger Freedman runs the science programming) But he still loves coming to the big show. "Somebody likened it once to concerts," he says. "There's the big stadium concerts with the pyrotechnics and the Jumbotron — and and that's Comic-Con — and then there's the small club date, where maybe you get to be right up to the stage, and after it the band comes down and mingles with the audience. And those are both great experiences. I can't see anybody not liking liking both."

I think you'd be hard put to find anyone in the United States today who does not know what Comic-Con is. And that's really a complete transformation. And to feel that we had a small part in that transformation is a very remarkable feeling.

No matter how big the big show gets, though, people still find fellowship here, and new things to get enthusiastic about. "The doors have been open for less than an hour and I've run into two people that I've known since the early 90s, people I've known since the 80s," says Jackie Estrada. "You just pick up that same conversation that you had a year ago and it's like you've never been apart for that long a time."

Shel Dorf died a few years ago, but most of his young proteges are still alive, still friends, and still here. "There's a famous quotation from science fiction fandom from the 1940s and 50s ... 'it is a proud and lonely thing to be a fan,'" says Roger Freedman. But things have changed dramatically since then. "I think you'd be hard put to find anyone in the United States today who does not know what Comic-Con is. And that's really a complete transformation. And to feel that we had a small part in that transformation is a very remarkable feeling."

This piece was edited for radio by Nina Gregory, and adapted for the Web by Petra Mayer.