Accessibility links
Iran Seizes British-Flagged Oil Tanker In Strait Of Hormuz Ship-tracking data show the U.K. tanker Stena Impero was traveling to Saudi Arabia when it veered toward Iran's coast. British media report the government warns shipping to stay out of the area. 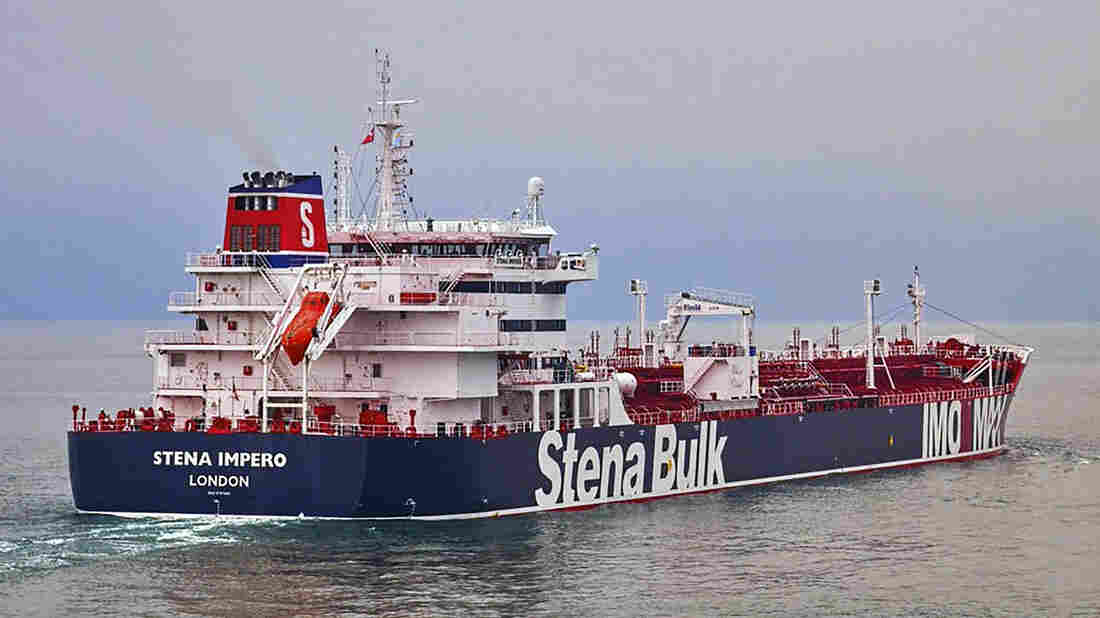 The owners of the Stena Impero say the tanker "was approached by unidentified small crafts and a helicopter" as it tried to pass through the Strait of Hormuz on Friday. Stena Bulk/AP hide caption 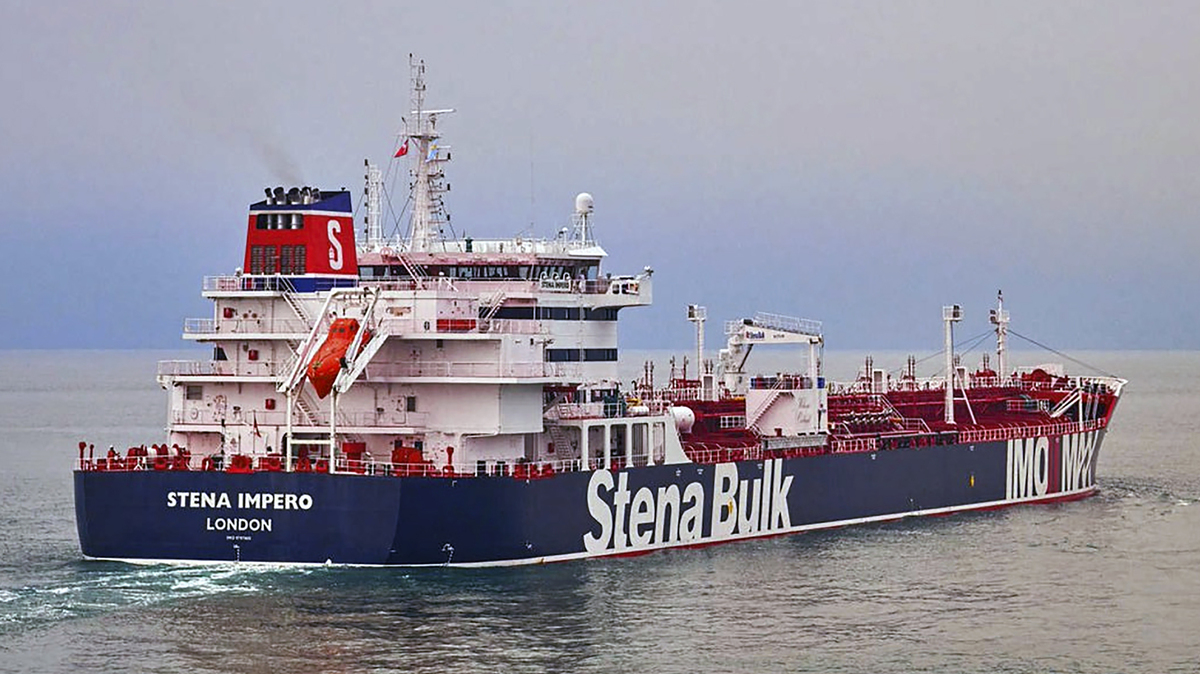 The owners of the Stena Impero say the tanker "was approached by unidentified small crafts and a helicopter" as it tried to pass through the Strait of Hormuz on Friday.

British media outlets say the government is warning ships to stay away from the area after Iran's military apparently seized the U.K.-flagged Stena Impero oil tanker as it passed through the Strait of Hormuz near Iran's coast on Friday.

The state-run news agency said that the Stena Impero was apparently detained after a collision with an Iranian fishing boat, the AP reports.

"I'm extremely concerned by the seizure of two naval vessels by Iranian authorities in the Strait of Hormuz," Hunt said in a statement widely quoted by British media. Saying that he was heading into a security meeting, Hunt added, "These seizures are unacceptable."

A government statement, as reported by The Telegraph, said, "We have advised UK shipping to stay out of the area for an interim period."

"We remain in close contact with our international partners and there will be further meetings over the weekend," the statement said. U.S. Central Command has said its aircraft are patroling international airspace, watching developments in the Strait of Hormuz.

President Trump commented on Iran's actions as he departed the White House on Friday afternoon, saying, "We heard it was one, we heard it was two" ships that have been seized. He added that Iran is "nothing but trouble," and he reiterated that the U.S. has a very close alliance with the U.K. 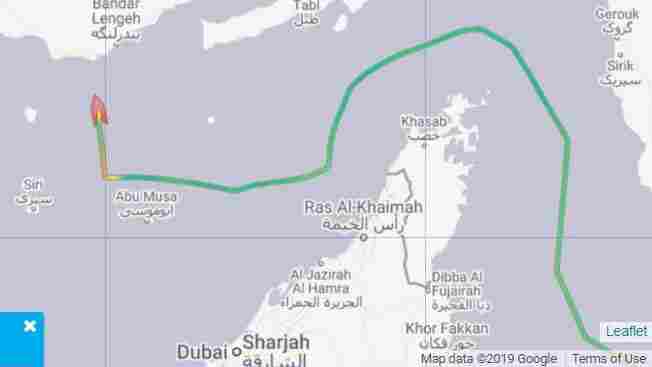 Ship-tracking data show the Mesdar oil tanker made an abrupt turn toward Iran on its planned route to Saudi Arabia on Friday. Maritime Traffic hide caption 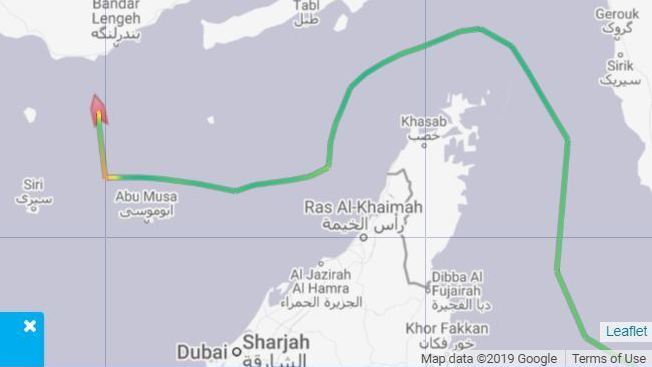 Ship-tracking data show the Mesdar oil tanker made an abrupt turn toward Iran on its planned route to Saudi Arabia on Friday.

The Stena Impero's owners, Sweden's Stena Bulk and its U.K.-based subsidiary Northern Marine Management, issued a statement saying the Stena Impero "was approached by unidentified small crafts and a helicopter during transit of the Strait of Hormuz while the vessel was in international waters."

The owners added, "We are presently unable to contact the vessel which is now heading north towards Iran."

The tanker has a crew of 23 sailors — and there have been no reports of any injuries, the owners said, adding, "We are in close contact with U.K. government authorities."

The Islamic Revolutionary Guard Corps Navy issued a statement published by the semiofficial Fars news agency saying that the Stena Impero was detained for "disregarding international maritime rules and regulations as it was passing through the Strait of Hormuz."

The Iranian military added that the U.K.-flagged ship was escorted to Iran's coastal waters.

The tanker's owners say they haven't been able to establish direct contact with the vessel since learning it was intercepted. Built in 2018, the seized tanker has a deadweight tonnage — the weight it can carry — of 49,683 tons.

The interdiction of the two tankers comes after tensions have risen sharply in the Strait of Hormuz, which the U.S. Energy Information Administration calls the world's most important strategic chokepoint for oil transport.

On Thursday morning, Iran announced that its Islamic Revolutionary Guard Corps Navy had seized a foreign-flagged oil tanker in the strait. That confiscation took place on Sunday; Iran alleges that the ship was smuggling 1 million liters (264,000 gallons) of fuel.

U.S. officials said later in the day that a Navy warship had taken down an Iranian drone that had gotten too close to the USS Boxer as it passed through the strait.

Two weeks ago, British Royal Marines helped seize an Iranian tanker in the Strait of Gibraltar on suspicion that it was carrying oil from Iran to Syria — a violation of European Union sanctions.

In response, a former Revolutionary Guard commander said Iran should seize a British oil tanker in retaliation. And last week, it seemed that Iran's navy tried to do just that, as the U.K.'s defense ministry announced it had foiled an attempt by three Iranian ships to divert a British oil tanker. Iran denied any involvement.

Iran is currently locked into a standoff with the U.S. — which left a landmark nuclear deal that was signed in 2015 — as well as with European countries that Iran says must now keep their promise to ease economic sanctions despite the threat of U.S. punishments.