Accessibility links
Piper Kerman Plays Not My Job On 'Wait Wait... Don't Tell Me!' Piper Kerman served time in minimum security prison for money laundering ... but how much does she know about actual laundering? We'll find out. 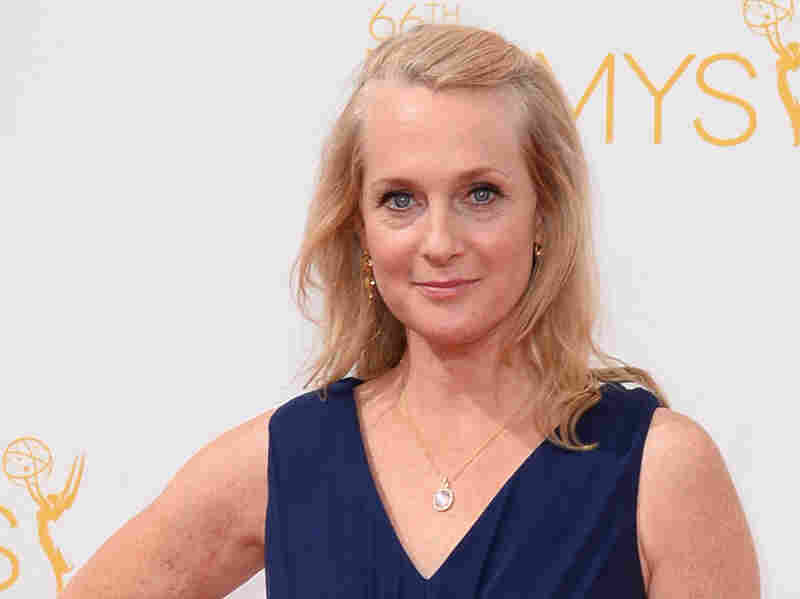 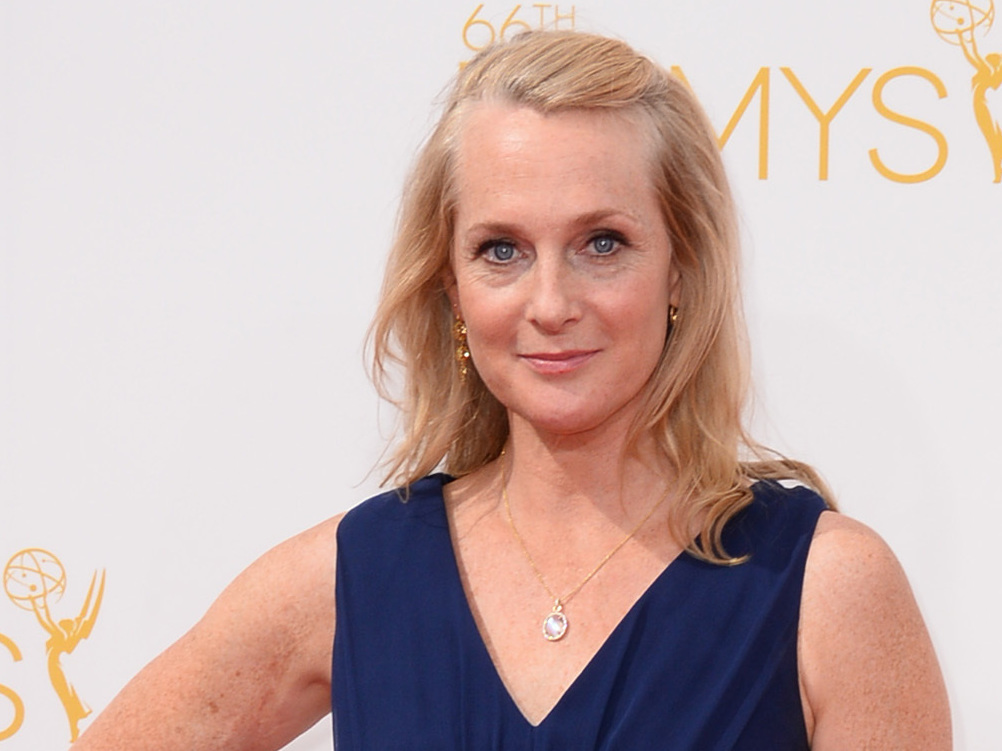 Piper Kerman served time in minimum security prison for money laundering for a drug ring — and turned that experience into the book and TV show Orange Is the New Black — but how much does she know about actual laundering? We'll ask her three questions about washing clothes.

Kerman now teaches writing to prison inmates in Ohio. The final season of Orange Is the New Black drops on Netflix on July 26. Click the audio link above to find out how she does on our quiz.

Read an excerpt of Orange Is the New Black

And now the game where we ask people who've been through a lot to go through something else.

SAGAL: It's called Not My Job. Piper Kerman was a happy-go-lucky young woman when she just happened to happily go to Europe with some drug money and got unlucky. She ended up serving a year in a women's prison. But you know all that because she wrote a book about her experience called "Orange Is The New Black," which was adapted into the hit Netflix series. She now spends more time in prison here in Ohio teaching writing to inmates.

PIPER KERMAN: Lovely to be here.

SAGAL: Well, it's great to have you. By the way, is it all right that we tell people that you're here in Ohio? Are you still on the run? I mean, I don't know what your status is.

KERMAN: I am not on the lam. And yeah, I've been living here in Ohio for almost five years.

KERMAN: It's been fantastic.

SAGAL: And I feel - I mean, I of course believe that everybody knows your story but maybe not, so let's go through it briefly. You were a young woman living, as we say, fancy free. This was back in the early '90s. And you had a friend who asked you to do this errand of bringing some money, which was ill-gotten...

KERMAN: She asked me to carry a bag of money from Chicago to Brussels.

SAGAL: Right. Which you did.

KERMAN: I have no claims of innocence on this.

SAGAL: OK. And you did that. And then you extricated yourself from that relationship and that life. But then, some years later, there was a knock on your door.

KERMAN: Many years later, the thunderous - it was actually a doorbell, but...

SAGAL: I was being metaphorical.

SAGAL: And to make a long and ultimately profitable story short...

SAGAL: You ended up pleading guilty to charges of money laundering and went off to Danbury state prison.

SAGAL: And so we should say that the book obviously is a memoir. It's nonfiction. But they took some liberties with the TV series, shall we say.

KERMAN: The book is a true story. And the show takes the book, puts it in a blender and puts a lot of other ingredients in that.

KERMAN: And isn't that fantastic?

SAGAL: So are you a fan of the TV show?

KERMAN: ...For sure - and all the people - all the wonderful people who make it.

SAGAL: So you're back in prison although, now you are doing it as an instructor. And so what are you doing, exactly?

SAGAL: And where are you doing this?

KERMAN: I do that at the Ohio State Reformatory for Women (ph), which is right smack dab in the middle of the state, and then at the Marion Correctional Institution for men.

SAGAL: Do you ever teach them any of your famous prison recipes?

KERMAN: They were very interested in the cheesecake recipe, actually, at the men's facility. The women all knew how to do it.

SAGAL: I was actually amazed to read this in the book - that all this cooking went on...

SAGAL: ...Which I did not think was the thing that happened in prison.

SAGAL: But apparently, it does.

KERMAN: As it turns out, the food in the chow hall is pretty bad.

KERMAN: So the skills of the prisoners are much better. The materials are kind of rough to work with.

KERMAN: But you do what you can.

SAGAL: Well, first of all, I did notice that you said that in the prison - the food was so bad, and since exercise was one of the few things you could do to spend your time, you ended up, at least at first, looking pretty great, you said.

KERMAN: I ran a half-marathon when I was in prison. That's...

SAGAL: Where did you - how do you run a half-marathon in prison?

KERMAN: You run a half-marathon around a quarter-mile gravel track.

KERMAN: That is a lot of left turns.

MO ROCCA: You must get dizzy.

SAGAL: Wow. So you - but as you say, the chow in the food hall was terrible, so you started cooking for yourselves. How do you make a cheesecake in prison?

KERMAN: To make a cheesecake in prison, you need a Tupperware bowl. You have to have that after you purchase it from the commissary or borrow it. You make a crust out of either smashed-up graham crackers or Oreo, depending on your proclivities. Yes?

ROCCA: Hold on. I'm writing this down.

KERMAN: Got it. You need some margarine that you've stolen from the chow hall. That is the only stolen ingredient in this recipe, which makes it novel and notable. And then, for the filling, you take those kinds of cheeses that don't have to be refrigerated. You need about a half a cup of pudding. You can usually get some pudding somewhere. And you sort of beat those things viciously together until they're creamy. And then...

SAGAL: You lay a beating on it.

KERMAN: You lay a beatdown on the pudding and the cheese. And you also start to add an entire thing of Cremora about yea tall and making...

KERMAN: I'm putting my hands about eight to 10 inches...

SAGAL: Cremora is the powdered...

KERMAN: Yes. You put that in there - the whole container. You try not to think about...

KERMAN: Right? And you mix, and you mix. And then actually, what you have is kind of a soupy mess.

KERMAN: Then you take the plastic squeeze lemon, and you put - I would use really most of the lemon. And you start to squeeze that into the mix, and it tightens up. I attribute whatever mysterious things are contained in non-dairy creamer.

KERMAN: But it's remarkably like the texture of a New York cheesecake.

KERMAN: And the taste - or so it seems if you're in prison.

ROCCA: You have got to get a Food Network show.

ROCCA: This is so great.

SAGAL: Well, Piper Kerman, it is a pleasure to talk to you. We've invited you here to play a game that we're calling...

SAGAL: So you were busted and, as we've discussed, served time for money laundering, which made us wonder how much you know about the more traditional kind of laundering.

SAGAL: Answer two out of three questions about what they call clothing laundering, you'll win a prize for one of our listeners - the voice of anyone they might like on our show on their voicemail. Bill, who is Piper Kerman playing for?

KURTIS: Sophia Casa (ph) of Ohio, who's here with her family today.

SAGAL: All right. This is for Sophia.

SAGAL: You ready to do this?

SAGAL: Yes. Here's your first question. American pioneers had a very inventive way of dealing with dirty clothes. What was it? A, sticking them in the Old Faithful geyser in Yellowstone and waiting for it to erupt; B, shooting their laundry with, quote, "soap-shot;" or, C, just standing near a buffalo and blaming the animal for the stink?

SAGAL: According to an account left by explorers, they say they would just stick their laundry in the geyser, wait for it to go up. The laundry would blow out in the air. They'd pick it up, it'd be clean.

KERMAN: That's what I would do.

SAGAL: Absolutely. Next question - while he was writing Walden, Henry David Thoreau, of course, shut himself off from civilization. That made getting his clothes clean difficult. What clever technique did Thoreau use to get his clothes clean during his year living at Walden Pond? A, coat his clothes in honey and let the bears lick them clean...

SAGAL: ...B, he used his philosophical insights to convince the clothes to turn away from dirt...

KERMAN: This is so easy. (Laughter) C.

SAGAL: Walden isn't that far out of town. They also brought food for him. All right. Last question. Nowadays, things, of course, in laundry as with everything else, it's all high-tech. Astronauts on the International Space Station do their laundry how? A, by laser; B, hanging them on a line outside...

SAGAL: ...Or C, loading their dirty laundry into a cargo spaceship and letting it burn up on reentry?

KERMAN: I think it's basically a version of disposable underwear. I'm going to go with C.

SAGAL: There's no water up there.

SAGAL: It's much easier to bring up clean laundry in a cargo ship, put the old laundry in the ship and let it burn up on reentry. You're exactly right.

Bill, how did Piper do on our quiz?

KURTIS: She got all three right...

SAGAL: Piper Kerman is the author of the book "Orange Is The New Black." The adaptation of the book is on Netflix. Its final season drops on July 26. Piper Kerman, thank you so much for joining us...

(SOUNDBITE OF SONG, "YOU'VE GOT TIME")

SAGAL: In just a minute, take a deep, tasty breath - it's our Listener Limerick Challenge. Call 1-888-WAIT-WAIT to join us on the air. We'll be back in a minute with more of WAIT WAIT... DON'T TELL ME from NPR.

SAGAL: From NPR and WBEZ Chicago, this is WAIT WAIT... DON'T TELL ME, the NPR news quiz. I'm Bill Kurtis. We're playing this week with Alonzo Bodden, Mo Rocca and Maeve Higgins. And here again is your host at the Blossom Music Center...