Accessibility links
Trump's Attack On 'The Squad' Finds Nuanced Support Among Some Jewish Americans After the president disparaged four congresswomen, some Jewish Americans defend Trump's comments, criticizing the lawmakers as anti-Israel and anti-Semitic. Others are appalled by Trump's remarks. 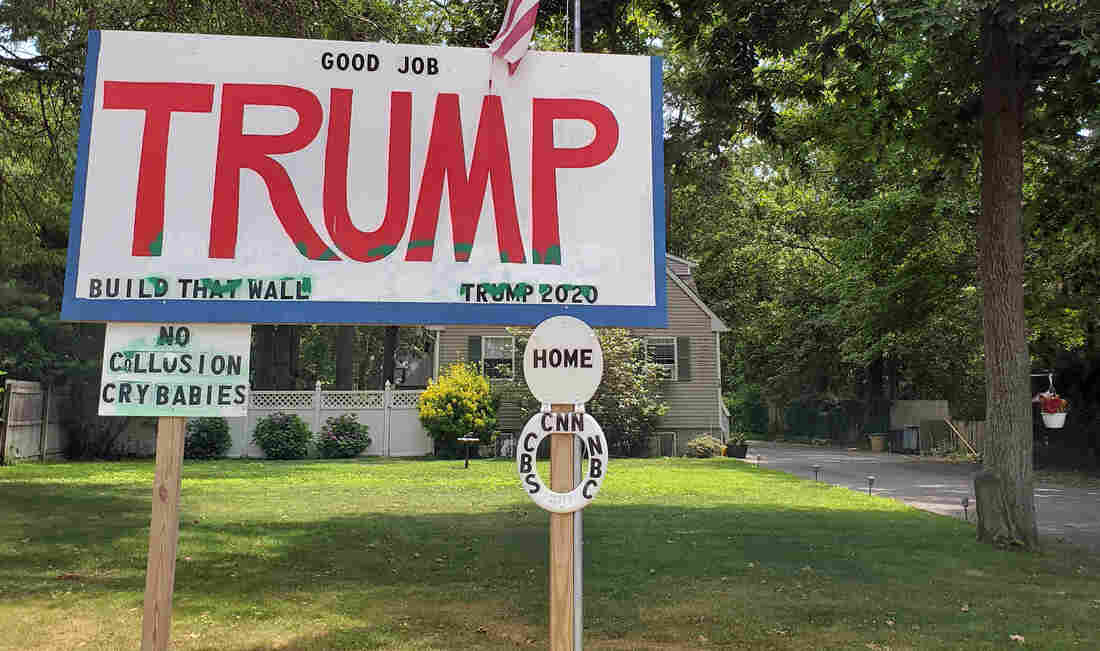 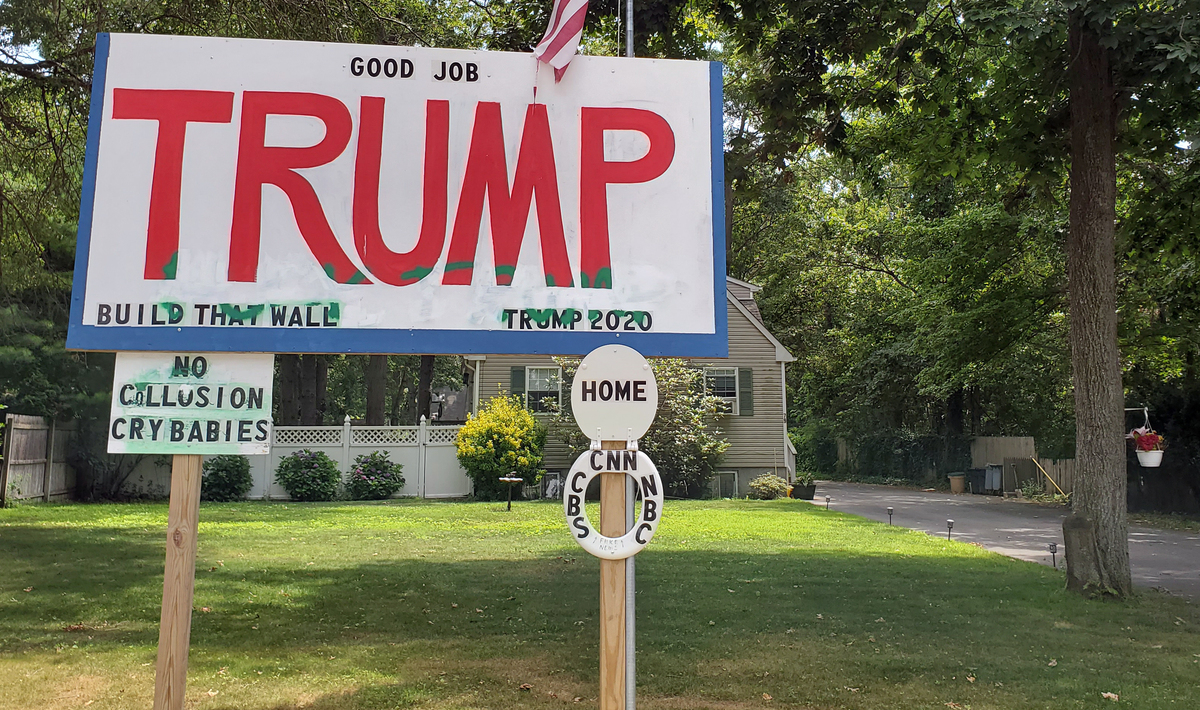 A pro-Trump sign next to B'nai Israel Reform Temple on Long Island, where Rep. Lee Zeldin, R-N.Y., is a member.

After President Trump attacked four progressive congresswomen in racist remarks last week, Republicans defending him often base their support on what they say is anti-Semitism — a familiar line of attack for the president as well.

Referring to Reps. Ilhan Omar of Minnesota and Rashida Tlaib of Michigan in particular, Zeldin said, "their hearts are filled with darkness" and their legislation "is filled with anti-Israel and anti-Semitic hatred."

However, the conversation among Jews is much more nuanced than that.

At the B'nai Israel Reform Temple on Long Island, where Zeldin is a member, congregants Karen Connor and Jerry Kessler are in a debate about Trump's rhetoric, often interrupting and finishing each other's sentences.

"He's allowed to free speech," Connor said of the president.

Kessler interjects to say that it's not presidential.

On the topic of Omar, an American citizen who moved to the U.S. as a refugee from Somalia, the two are even more divided.

Omar's previous comments questioning a pro-Israel lobby's influence in U.S. politics had been widely condemned as anti-Semitic. Critics also frequently fault her for not distancing herself from Hamas' threats to harm Jews.

On Wednesday, Trump continued his charge of anti-Semitism against the congresswoman, saying, "Omar has a history of launching vicious, anti-Semitic screeds."

The debate between Kessler and Connor is friendly, but also forceful.

In the end, Connor supports their congressman and fellow templegoer, while Kessler said Zeldin's refusal to disavow Trump's attacks against Omar could cost him the election.

In response to criticism against Trump's remarks that the congresswomen, all U.S. citizens of color, should "go back" to where they came from, the president said, "So sad to see the Democrats sticking up for people who speak so badly of our Country and who, in addition, hate Israel with a true and unbridled passion."

Josh Franklin, a rabbi at the Jewish Center of the Hamptons, also located in Zeldin's district, said, "You ask two Jews, as that joke goes, you'll get three opinions."

Franklin supports Zeldin's confrontation with Omar, specifically after she made comments condemned as anti-Semitic, for which she later apologized.

After her apology, the House passed a nonbinding resolution that condemned "anti-Semitism, Islamophobia, racism and other forms of bigotry."

Franklin said that resolution was "watered down" and turned Omar into "the victim" when she was supposed to be directly condemned for her anti-Semitic rhetoric. Twenty-three Republicans, including Zeldin, voted against the measure.

"I actually think he got it right and most of Congress got it wrong," Franklin said of Zeldin. "I think that was a shameful day in Congress, and I think most of the Jewish community would agree with me."

But Franklin also called the president's rhetoric offensive and inappropriate, and said that Jewish leaders need to step forward and say so.

At the synagogue across the street, however, the opposite is happening. No one is talking.

Several men and boys have gathered for afternoon prayers at the Chabad of the Hamptons. Most of them have strong views on the issue, but they are reluctant to say anything publicly. Some said speaking will only invite more hate. Another said the issue of Trump divides friendships.

But Marc Ringel breaks the silence: "Why are you so worried about tweets?"

He said the tweets are the problem. Trump's tweets, Omar's tweets — everyone is tweeting instead of having a thoughtful discussion.

"You got to have a debate," he said. "One hundred and fifty characters is not a conversation."