Accessibility links
Comic-Con 2019, Day 2: The Infamous Coffee Cup On the second full day of San Diego Comic-Con, highlights include the last-ever (maybe) Game of Thrones panel and the Eisner Awards, celebrating the best work in comics. (Also, some good cosplay.) 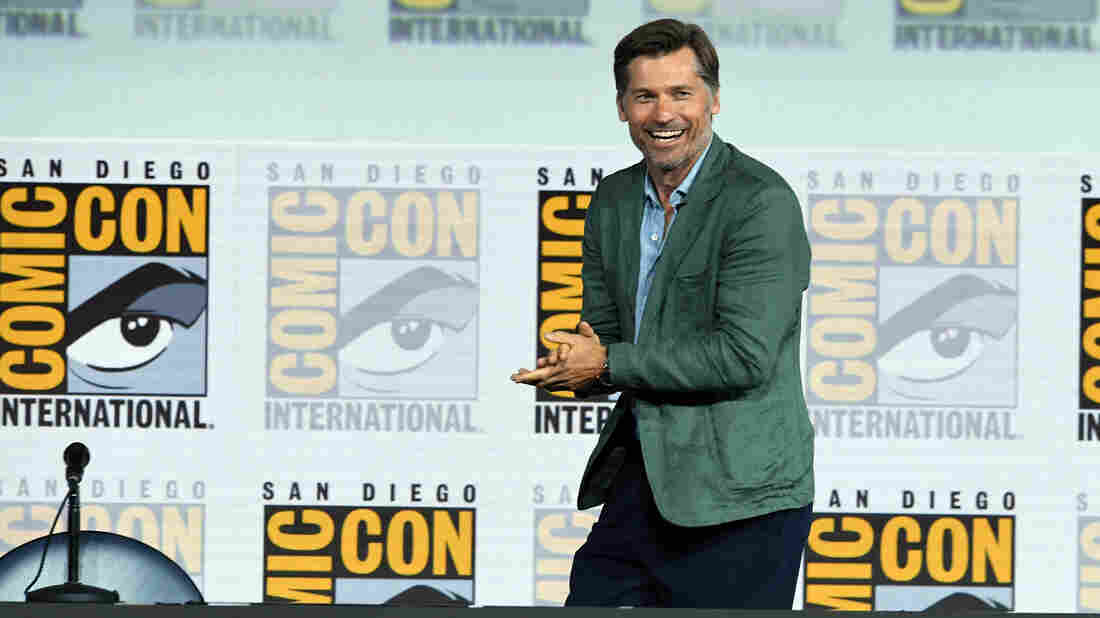 Nikolaj Coster-Waldau said he approved of the way Game of Thrones killed him off. But the audience at Friday's panel didn't agree. Kevin Winter/Getty Images hide caption 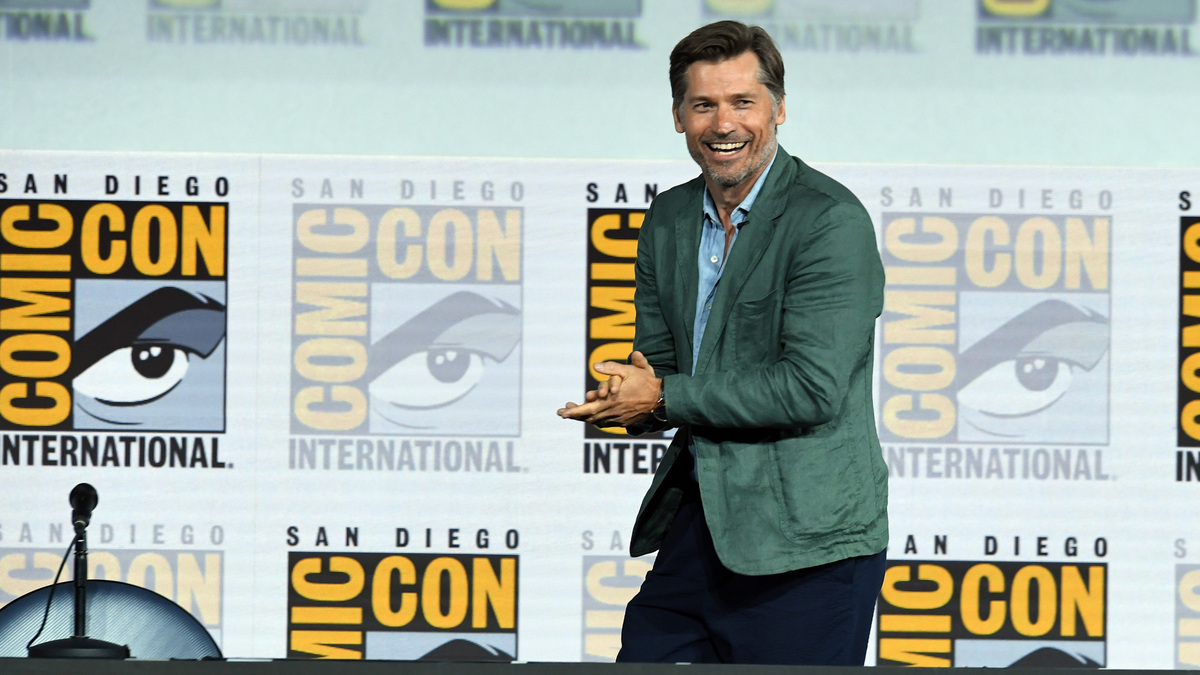 Nikolaj Coster-Waldau said he approved of the way Game of Thrones killed him off. But the audience at Friday's panel didn't agree.

Mallory: It's Friday! By this point in the con, the crowds are much crowdier, the lines for everything are much longer, the cosplay is starting to come out ... we're in the full swing of things, folks.

Today, I went to the last ever Game of Thrones panel in Hall H. The crowd was jam-packed, many bedecked in braided platinum blonde wigs or draped in furs and leather, though I do have to say, I've seen a surprising lack of GoT cosplay so far — I was expecting everyone to have gone Full Sansa by now! Still, the excitement in the air was palpable, and when the cast panelists were announced — Nikolaj Coster-Waldau (Jaime Lannister), Maisie Williams (Arya Stark), Liam Cunningham (Davros), Isaac Hempstead Wright (Bran Stark), Jacob Anderson (Grey Worm), Conleth Hill (Varys), and John Bradley (Samwell Tarly) — the crowd roared.

Here's where I confess that I'm not a huge fan of the show. I watched a few seasons, then decided that the violence against women was too excessive for me (among other things) and quit watching. I liked reading about Game of Thrones, though, so I kept up with it. Honestly, I was just hoping to hear David Benioff and D.B. Weiss talk about the choices they made, especially around the series finale. Alas, days before the con started, HBO released an updated list of panelists and Benioff and Weiss were curiously no longer on it. Still, I attended the show's first Comic-Con panel in 2011, and I thought attending this (presumably last) panel would be a nice bookend.

Of course there were going to be questions about the last season — all the spoilers are already out, so there isn't anything the actors can't talk about. And the cast all defended their respective "ends," even if the crowd wasn't always buying it. At one point, Coster-Waldau, responding to a question about his character's ending, said, "I thought it was brilliant. I thought it was perfect for that character's ending — in the arms of Cersei. It made sense to me." As he took a breath, someone in the audience shouted "lies" and a smattering of laughter rippled through the room. Coster-Waldau just laughed, "there's always one." Still, every actor on that stage emphasized how much they loved working on the show.

"For the record," Conleth Hill said, "I loved all my ten years on Game of Thrones ... it was a life-changing experience."

I loved all my ten years on Game of Thrones ... it was a life-changing experience.

Funny and lively, the panel was a nice taste of the silliness that must have gone on while shooting, and it was clear that the cast were all very passionate about the show. They held up coffee cups at one point in the panel, Cunningham joking "someone left some coffee cups here," a clear nod to the Infamous Starbucks Cup. And they addressed the water bottle, spotted next to John Bradley's leg during the final episode of the series. Bradley doesn't think it was his fault. He defended himself saying "I'm right-handed. So if I'm drinking a water bottle, with my right hand, right?" He said he thought if he was going to put the water bottle on the floor, he'd put it on the right side of his leg, but the bottle in the episode was on the other side of him. He later said, "when it was circulating, I was thinking 'oh my god, the episode's been ruined, and it's all my fault. Pardon me for being thirsty.'"

Some of my favorite moments from the panel came when moderator Maisie Williams revealed that she didn't steal very much from the set, though she did take some silicone blobs used on the show to simulate puddles of blood, and left them on the floor of her trailer's bathroom. She burst into giggles, as Cunningham leaned into his mic and said, "There's something wrong with you."

From there, I paneled with critic and comics creator Rosie Knight, entertainment writer Joelle Monique, comics writer and journalist Jazmine Joyner, and Michael Molcher from British sci-fi magazine 2000 AD to talk about "Women Who Love Horror: The Forgotten British Girls' Comics," namely Misty, a comic for girls published from 1978-1980 and now being reprinted by 2000 AD. I hadn't heard of Misty until I talked with Rosie about the panel, but I've really been enjoying reading them. Each volume is comprised of short, self-contained stories about and for girls, where the mundane horror of being assigned female at birth is elevated to the supernatural — for example, "Moonchild" is a Carrie-esque tale of a young girl who's being abused at home and bullied at school, and when her powers come into full fruition, she's able to exact her revenge, albeit in an age-appropriate and much less murderous way.

I could write a lot more about this comic, but it's getting late and I have interviews to prepare. I'll end where my day ended: at toy company Funko's "Freaky Tiki Fundays" party. I've gone to the Will Eisner Comic Awards ceremony every year I've been at SDCC as press, but this year, it was time for a change of pace. Boy, is it ever. Where the Eisner Awards are a more placid event, this Fundays party was loud and frenetic, part awards ceremony, part variety show, part toy giveaway. Fans pay quite a bit of money for tickets to the event, and they definitely don't leave empty-handed; Funkos were being handed out every five minutes, it seemed. Funko "Funatics" are a passionate and loud bunch (this radio producer was wearing earplugs from the minute she arrived), and it's hard not to also be excited when, say, Mark freaking Hamill aka Luke Skywalker aka iconic voice of the Joker makes a surprise appearance.

But ultimately, I found that I missed the comics! Yes, the Eisner Awards are notoriously lengthy, and by the end of them, I've always thought to myself 'I want to be in bed now can we hurry it up,' but I'm still a nerd who likes to sit with other nerds and not-too-wildly (or loudly) celebrate the good work that talented people created last year. It always leaves me feeling buoyed about the future of comics, a medium I love. Petra, you went to the Eisners this year. How did it all shake out?

Petra: Well, you may have partied with Mark Hamill but I went to the Eisners, and got to sit at a table with SERGIO ARAGONES, so there. (Many thanks, as always, to the great and good Maggie Thompson, mother of our pal Stephen Thompson and a Comic-Con legend, for letting me sit at her table.) It is true, the Eisners are lengthy, and as the evening went on, the attendees got drunker and the speeches got shorter — and funnier, and more profanity-ridden.

Comics have always been a home for the odd. Let it continue to be so.

The big winner last night was writer Tom King, who took home three trophies for his work on Miracle Man, Batman and Swamp Thing, and seemed to get more and more adorably flustered every time he got called up to the podium. For his final win, his speech consisted of "It's all dedicated to my wife, so let's go f***ing party!" Although, for my money, the best speech came from the guy from Viz comics (whose name I unfortunately did not get), who came up to accept an award for Japanese horror master Junji Ito's adaptation of Frankenstein. "It's 4am," he said, exaggerating only slightly, "and we're all drunk, so although there is a prepared speech, I'm not going to read it." Readers, the crowd went wild. Although when I told Mallory about it, she said "OH NO, I love Junji Ito and I want to someday do a profile of him and his horror comics! That's REALLY DISAPPOINTING! I'm a nerd who's mad about it!"

A highlight of the evening came from Edgardo Miranda-Rodriguez, creator of the Puerto Rican superhero La Borinqueña — 100% of the proceeds from the Borinqueña anthology, Ricanstruction: Reminiscing and Rebuilding Puerto Rico, go to a grants program that's helping rebuild after Hurricane Maria. Miranda-Rodriguez won a Bob Clampett Humanitarian Award for the work, and he gave an impassioned speech about the lives lost to that disaster, and the need for Puerto Ricans to be represented and recognized as fully American. "La Borinqueña is a hero who represents my island, my people, unapologetically," he told the cheering crowd — and I spotted his two children sitting right up front; his little daughter was clapping for her dad in a Borinqueña costume.

But I think my favorite sentiment of the night came from legendary DC Comics president Paul Levitz, who was accepting the Bill Finger Excellence in Comic Book Writing award on behalf of the late E. Nelson Bridwell — a writer for DC and Mad magazine, who had an incredible knowledge of DC universe continuity and is sometimes credited as being the first person to posit that DC and Marvel heroes existed in the same universe, thus enabling crossover stories. Bridwell also taught himself Latin and Greek as a kid to read the myths he loved in their original form. At his funeral, Levitz recalled, Bridwell's Oklahoman aunts described him as "odd," and said they'd never known what to do with him. "Comics have always been a home for the odd," he said. "Let it continue to be so."