Accessibility links
Comic-Con 2019, Day 3: Cosplay Day! (Plus, Yes, The Marvel Panel) At San Diego Comic-Con, fans strut their stuff in all kinds of costumes — some homemade, some elaborately professional. Even pets and little kids get in on the act. 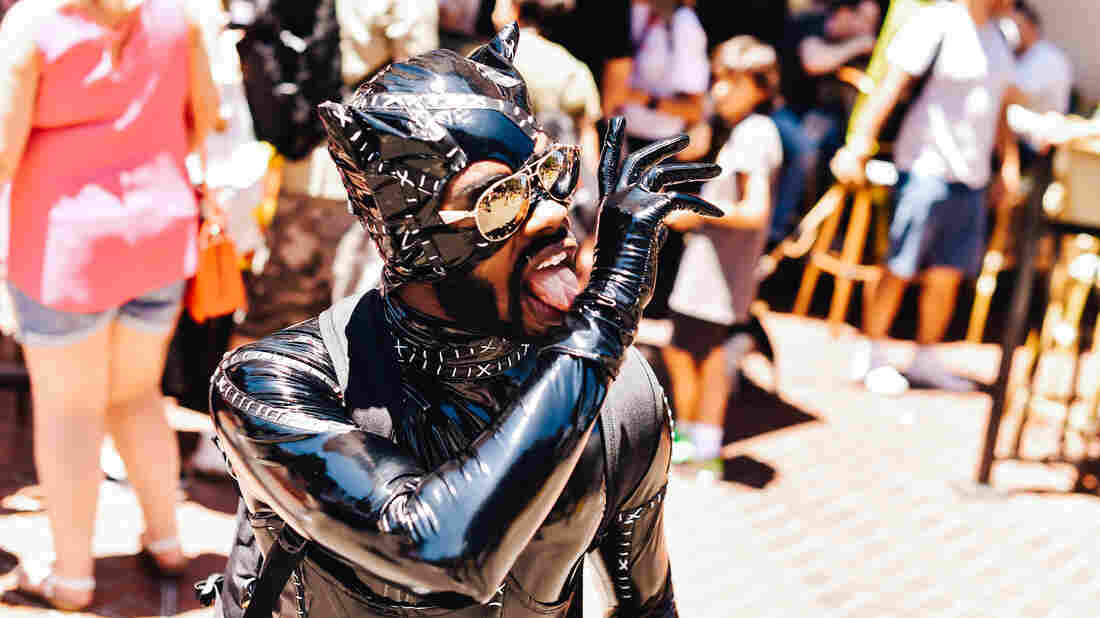 There were a lot of people dressed as Catwoman at Comic-Con on Saturday, but this gentleman took the catnip fishie. Matt Winkelmeyer/Getty Images hide caption 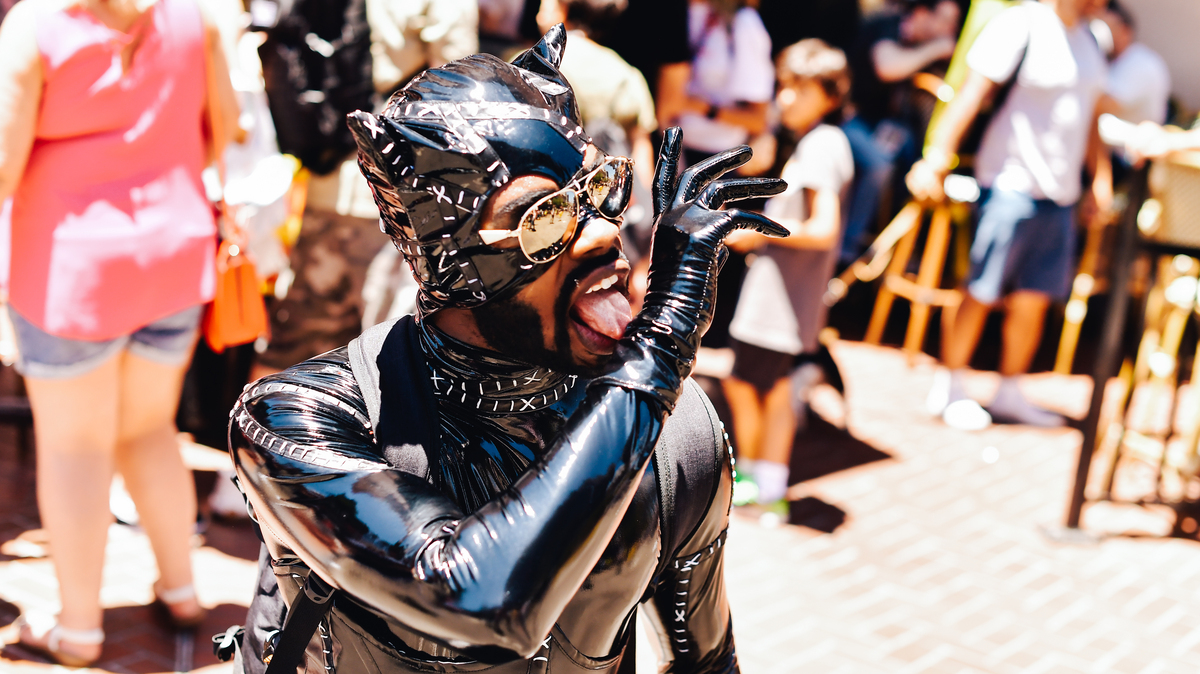 There were a lot of people dressed as Catwoman at Comic-Con on Saturday, but this gentleman took the catnip fishie.

Petra: It's Saturday! (Or actually, as we're posting this it's now Sunday) I feel the need to reiterate this, lest I forget what day it is or which direction is up! Saturday tends to be the day people bust out their best cosplays — I saw some truly amazing getups, including countless Deadpools (Deadspool?), a lot of women dressed as Loki and Doctor Strange, a really well-done armored Cersei Lannister, Missandei of Naath carrying her own head, and my personal favorite, Logan and Jessica from Logan's Run, complete with life-clocks in their palms.

I love the cosplays that clearly spring from deep in someone's fan-psyche — the ones that aren't from this year's hot movie, that maybe three other people will get, but those three people will be REALLY excited. I may be slightly tooting my own horn here, because I cosplayed Sabriel, from Garth Nix's Old Kingdom series, and three people recognized me, but they were REALLY excited. Also, those books are fantastic, and if you haven't read them, you really should. 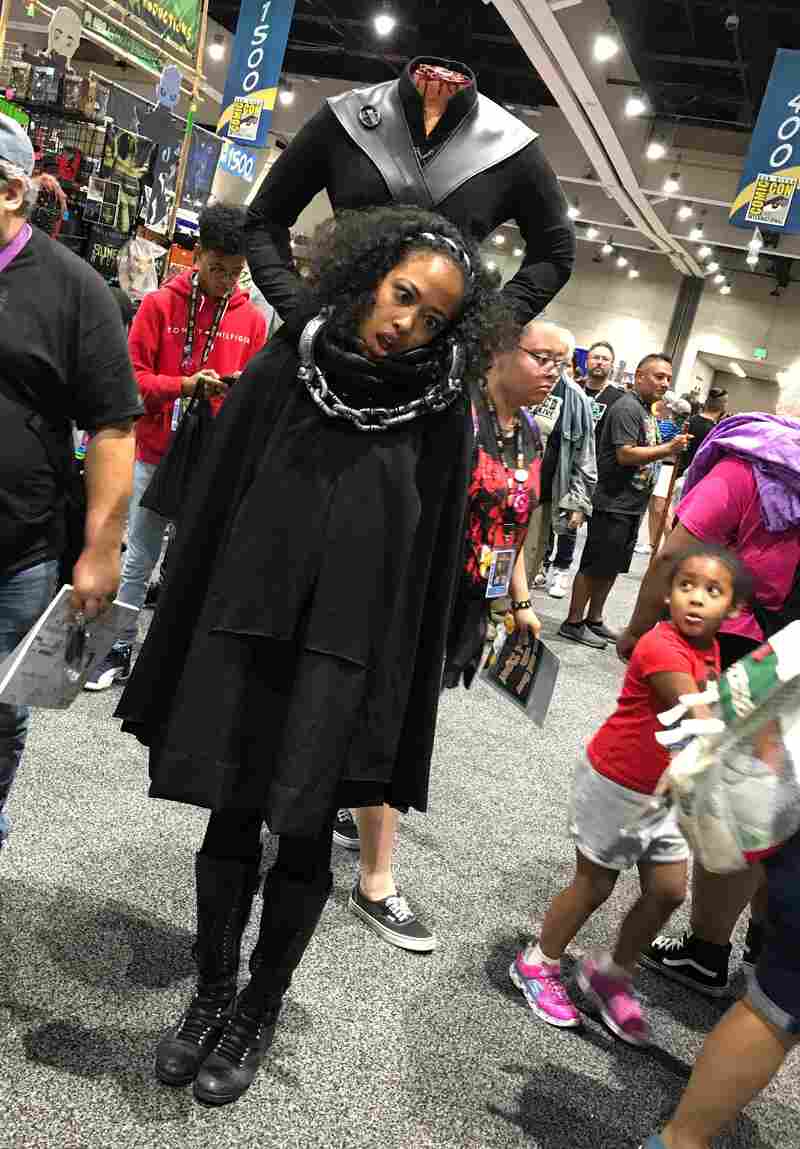 Missandei was pretty scary, even if you weren't that little girl on the right. Petra Mayer hide caption

Mallory and I have both been trying to balance having actual convention fun with, you know, doing our jobs — and today I did get to do A Fun Thing: I went to the activation for the new Amazon Prime TV adaptation of The Boys, Garth Ennis and Darick Robertson's comic about a world in which superheroes are secretly sadistic, entitled jerks, hunted by a band of vigilantes. My group got herded into a completely trashed space that appeared to have been an electronics store before a car crashed through the window, and actors dressed as characters from the show ran us through a mission connecting the carnage to a superhero and destroying the surveillance footage — on VHS! I was impressed by the verve with which one guy stomped on the prop tape — before the supes arrived to vaporize us. The Boys can be funny, but it's also a gruesome, gross take on the superhero mythos; I'll be interested to see how that translates from the page to the screen.

And in the post-Eisner Awards fog, I forgot I did A Fun Thing yesterday too! Mallory and I got to check out a Thirteenth Doctor VR game at the BBC America booth. VR makes me kind of woozy, but the chance to step into the TARDIS, if only virtually, was too cool to pass up. I managed to a) not get sick from the VR and b) display some actual manual dexterity as the Doctor coached me through assembling a communications device from some random junk in order to summon the TARDIS. I'm not ashamed to say I got a teeny bit teary as I stepped through those blue doors and the theme music swelled in my ears at the end of the game. (Oh Doctor, I'm still waiting for you to come take me away!)

And now we're in the home stretch — on the show floor you can feel the kind of febrile excitement that comes from 130,000 very enthusiastic fans crammed into one building with all of the things they love, strung out from three days of this and knowing there's still another day to go. But we can do it! I have faith in us. And I've retained enough brain cells to decide that getting up at 5 AM to line up for the Pokemon Detective Pikachu activation is probably not the best course of action. (But but but PIKACHU!) 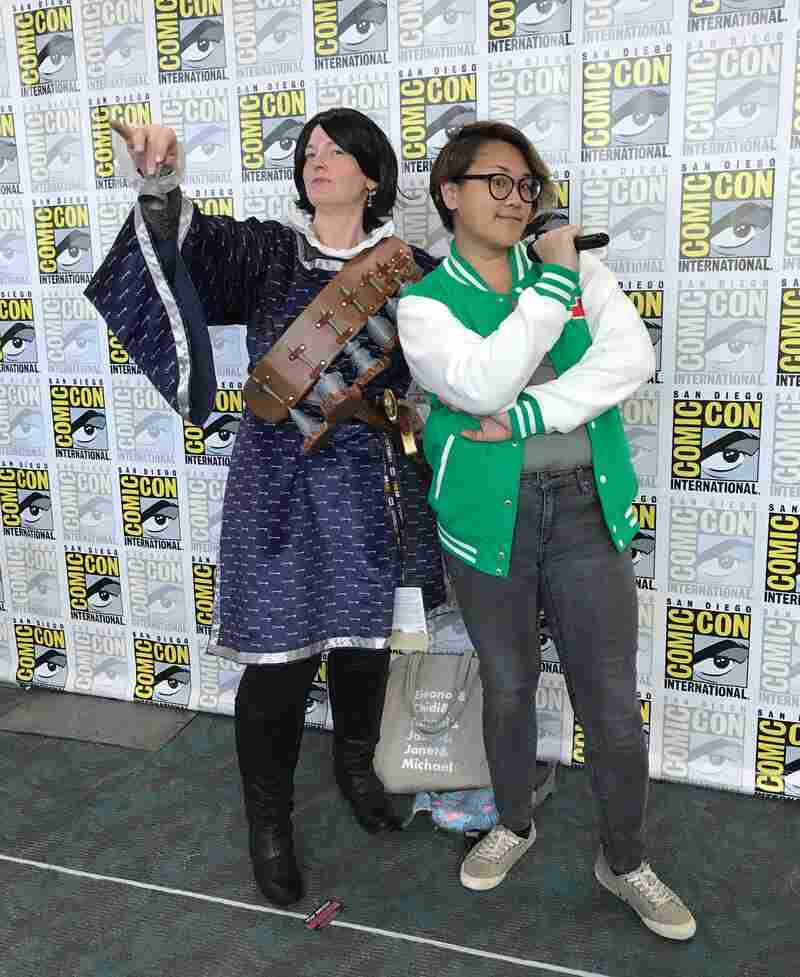 Your faithful con correspondents are no slouches in the cosplay department, either. Petra Mayer hide caption

Mallory: I'm so tired, I kept thinking Saturday was Sunday and I'd be going home soon. To my bed. And my cat ... I did have a lot of fun today — it's just that fun at SDCC can take a lot of effort.

Petra's costume is incredible, as you can see. (Petra: All praise goes to the crafty friend who made it for me) Me, I opted for the "comfy" route this year and threw together some closet cosplay. The one I wore today is a nod to Pop Star: Never Stop Never Stopping, a mockumentary about a fading pop star trying desperately to stay relevant. My costume is from this scene in the movie. Not one person recognized my costume, which isn't surprising since it's just a varsity jacket — but it was fun for me and that's really all that matters.

I'd be remiss if I didn't talk about the Big Comic-Con News of the Day: Marvel's big Hall H panel. Lots of excitement here.

But the best thing that happened to me yesterday was getting to spend an hour in the intimate Horton Grand Theatre with Scary Stories to Tell in the Dark producer Guillermo del Toro, director André Øvredal, and three of the craftsmen who helped shape the monsters in the film. Mike Elizalde, creature effects supervisor, and Norman Cabrera and Mike Hill, both makeup effects artists. With Scary Stories, del Toro said that he's "trying to keep physical effects alive," and the audience burst into applause. As footage from the film's production played on screen, all five men talked about the process of designing and crafting the intricate monsters, from the initial foam tests to the detailed paint jobs meant to simulate rotting flesh and icy blue veins.

I've long admired del Toro's use of physical effects — the way monsters in his movies aren't CGI-ed but (latex) flesh and blood, so getting to peek behind-the-scenes was especially cool. My personal favorite was a new creature, made specially for this film, called Jangly Man, which elicited full gasps from the audience and sent a shiver down my spine. Elizalde explained that the latex suit needed to be able to contort with the actor's movements, which was a challenge because real muscle and sinew shift where latex ones do not. At one point, emphasizing the importance of these types of effects, Øvredal remarked that during shooting, "I don't have to point to a tennis ball and tell the actors to scream. It's real." Indeed, the b-roll footage playing above his head echoed this sentiment, showing the Jangly Man in full costume as he arrived on set with the actors cringing (and running) away from him.

This is what I love most about San Diego Comic-Con and really any comic convention I attend: the passion. It's everywhere. It's in the small panels like Scary Stories, where masters explain their craft to small audiences. It's in the lovingly handcrafted costumes people make to represent their favorite characters, the screams that accompany appearances by actors like Tessa Thompson or Nikolaj Coster-Waldau, the way fans will line up for hours for a panel or a toy. It's easy to focus on how tired I am or how much work I need to be doing on any given day, and it's difficult to revel in the excitement when you're trying to navigate through a jam-packed crowd, but it's still special to be here. How could it not be, when you're among tens of thousands of fans like you?

Petra: I agree. I rounded out my con today with a panel called Cartoon Voices, where five voice actors who you've almost certainly heard somewhere — Candi Milo, Dee Bradley Baker, Secunda Wood, Jim Meskimen and Robin Atkin Downes — talked about their craft and their heroes, but most importantly, demonstrated that craft on stage to the delight of the audience. As the grand finale, moderator Mark Evanier — himself a veteran comic and TV writer — had them all do a cold reading of a short script, in this case the story of Rapunzel, while he called out different character voices for them to use. It was an hour and a half of sheer joy, and the perfect way to end my convention. I have heard Dee Bradley Baker give his impression of a bowl of angry oatmeal, and I can go home happy. Until next year, fellow geeks!