The courthouse in Luzerne County, Pa., where officials this month sent letters to parents who had unpaid cafeteria debt, threatening to take parents to court if the obligations were not settled. John Greim/LightRocket via Getty Images hide caption 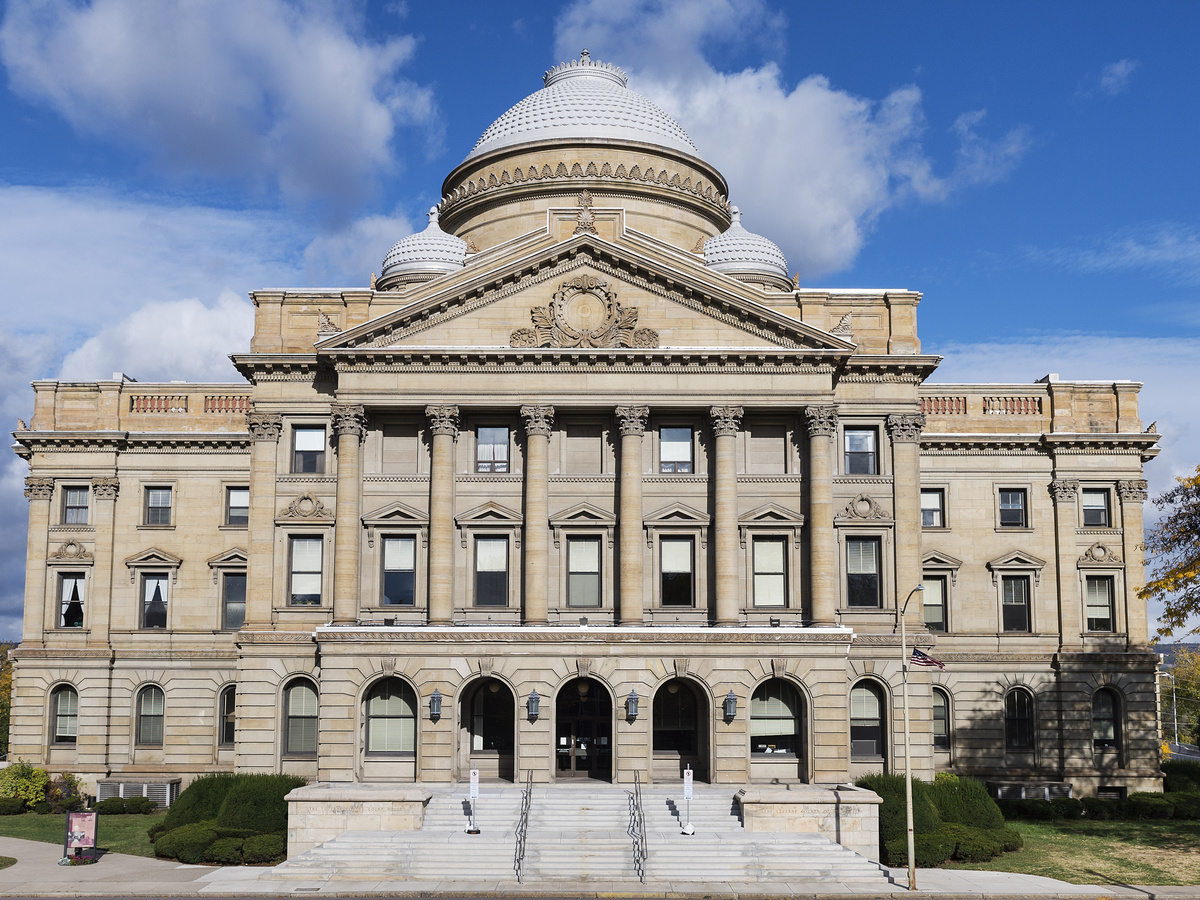 The courthouse in Luzerne County, Pa., where officials this month sent letters to parents who had unpaid cafeteria debt, threatening to take parents to court if the obligations were not settled.

Dozens of families in Pennsylvania received an alarming letter from their public school district this month informing parents that if their kid's lunch debt was not settled, their child could be removed from their home and placed in foster care.

Wyoming Valley West School District, one of the poorest districts in the state as measured by per-pupil spending, is located in a former coal mining community in Northeastern Pennsylvania, known affectionately by locals as "The Valley."

When officials there noticed that families owed the district around $22,000 in breakfast and lunch debt, they tried to get their money back.

"By mail, email, robo calls, personal calls and letters," said Joseph Mazur, the president of the district's board of education.

But, Mazur said, nothing worked.

That's when district officials sent out the now-infamous letter to about 40 families deemed to be the worst offenders in having overdue cafeteria bills — those were children with meal debt of $10 or more.

"Your child has been sent to school every day without money and without a breakfast and/or lunch," said the letter signed by Joseph Muth, director of federal programs for the Wyoming Valley West School District. "This is a failure to provide your child with proper nutrition and you can be sent to Dependency Court for neglecting your child's right to food. If you are taken to Dependency court, the result may be your child being removed from your home and placed in foster care."

Not all local officials endorsed the move. County officials criticized the threat of foster care placement, pointing out that the foster care system should be used only when children are abused or in danger, not as a weapon to collect money.

"The foster care system should never be viewed as a punitive agency or weaponized to terrorize children and families," said Luzerne County Manager David Pedri, who noted that county officials have asked the school district to stop using the language contained in the letter.

But in an interview with NPR on Sunday, Mazur defended the letter.

"I think you have to pay your bills. I mean, I've been paying my bills all my life. So has everybody else. I mean, sometimes you have to do without something for yourself if you want to raise your kids and see that they're taken care of," Mazur said.

The $22,000 owed is a fraction of the school district's $80 million annual budget, but Mazur said times are tough for Wyoming Valley West.

"We are in the process of trying to save money wherever we can. We have laid off some employees. We have reduced some of our curriculum. And we're looking anywhere we can save," Mazur said. "I don't care if it's $1,000 or $20,000."

Mazur emphasized that despite some students not having enough money to afford breakfast and lunch, the school district still fed all the children.

"Every poor kid got a meal," Mazur said. "If the Board of Directors was mean and cruel they'd just honestly say, 'Stop the lunches,' but we didn't."

Bill Vinsko, a lawyer in Northeastern Pennsylvania who used to work in local government, said while the area's weak tax base does put a strain on schools, many households are also struggling to get by on low-wage jobs.

"And then they get a letter saying their kids might be taken away from them; it's petrifying for them," Vinsko said. "That is really scary for parents who are trying to work for the best interest of their kids."

Vinsko said not being able to pay for school cafeteria meals on a timely basis would likely not meet the state's legal definition of neglect, so a prosecution over a lunch bill would not be likely, "so it's just something that is going to exacerbate the situation," he said.

Mazur, meanwhile, said while petrifying people was never the objective, the tactic did help recover some of what was owed.

"Was the letter a little strong? Maybe yes," Mazur said. "But it did work, because they're paid now."

"No child should have to imagine the horror of being ripped away from their parents because their family is struggling economically," Casey said.

Mazur said future letters dangling the possibility of parents losing custody of their children will not be sent out to households.

Since the poverty level among students has risen in the district recently, new federal nutrition assistance is expected district-wide to cover meals for all students, regardless of their family's economic means.

Mazur said that new support should stay in place for the next five years, and he is hoping the letter controversy will soon be put to rest.

"I think this whole thing has just been blown out of proportion," Mazur said.