Accessibility links
In 'Beijing Payback' By Daniel Nieh, An Immigrant Story (And A Crime Thriller) Daniel Nieh used to be a model and a translator. He says both of those professions went into his debut novel, a page-turner about a college basketball player unraveling his Chinese father's murder. 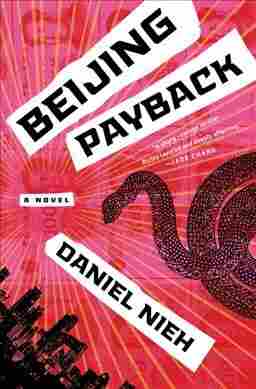 Before writing his first book, author Daniel Nieh was an international model and a Chinese interpreter.

"As a model and as a translator, you're always behind the scenes," Nieh says in an interview. "You know, you get backstage, you're a fly on the wall, you're there to be seen or be heard but maybe not to speak. And so you get to witness all kinds of different bizarre situations."

Beijing Payback is a thriller full of those situations: glitzy nightclubs full of models and mobsters, strip-mall massage parlors, the underground lair of a Chinese gang kingpin. A Chinese American college basketball player named Victor Li learns that his father was murdered — and that perhaps his father was not quite the person he was thought to be.

The story takes place in Southern California and China. And Nieh says his work as a translator and interpreter came in handy with squaring those two worlds.

"There's no such thing as 100% accuracy, either when you're talking about a document or when you're talking about when people speak to each other," he says. "So especially when you're working doing consecutive or simultaneous interpretation, you have to be really on your toes about cultural sensitivities and reading the moods and that kind of thing. Overall, that's the kind of sensitivity and attention to detail that really fuels good prose and good fiction."

On the father-son relationship in the book

This is a situation that is really universal in one way, which is that when you're in your teens or maybe in your early 20s like Victor is, at a certain point you realize that your parents aren't perfect. And you stop worshiping them, and maybe you start resenting them or resisting them. And then that usually, for people, evolves into a Phase 3 where, maybe later on in your 20s or your 30s, you accept them, you forgive them, you feel grateful to them. So that's a universal story that I myself have experienced — it's just a part of coming-of-age.

At the same time, it's more complicated in this situation, because here's someone who was born in a totally different context — this is the father — and he's never really shared that story with his son. So the son is in the process, throughout this book, of discovering his father's background and childhood. And that's kind of the crux of the novel.

On the experiences of children of immigrants, whose parents' previous lives often go unspoken or unknown

The thing here is — in my book, that's couched in this thrilling plot, because I want to write an exciting, page-turning crime thriller. But for people like me who are the children of immigrants, that seems almost universally true. And I grew up in this environment where I had a very loving father who did a lot of parenting to me — who took a lot of interests in my interests. But he never spoke about his childhood in China. He never spoke about the crazy things he had experienced. And I didn't know that he had come to this country as a refugee until I was in my 20s.

People, when they immigrate, they often feel ... almost like a sense that they have to hide who they were. But the truth is — and it's dramatized in this book, but the truth is — is most of the people who have come to this country have some crazy stories to tell about how they got here, and a completely different upbringing than the children who they raised in a completely different environment.

On his own father's story

It's a really good story, because my father was from a[n] aristocratic background in Shanghai. So he grew up the descendant of a very famous general, and of another mayor, and they had servants in a big house. But when he was 8 years old, that all came to an end, because he was part of the status quo, and Communists took over China in 1949. And he and his family moved to Hong Kong where they would be safe. And so once he was in Hong Kong, he was just sort of more an ordinary person. And that's where he spent his formative years, from around 8 years old to about 20. And then he moved to the United States, and all of a sudden he was an undergrad studying engineering at Southern Methodist University in Texas — and then we're talking about the 1960s, so he was a complete fish out of water.

And I think that diversity of experience, I think the first three decades of his life, really shaped him into an extremely flexible and extremely courageous person. And that's one of the reasons I've always looked up to him, and been interested in having my own adventures, and I think probably being a little less averse to risk than I might otherwise be. ...

I had such a great childhood that I never realized these things were secrets. It's just — I didn't think of my dad as a storyteller. But the thing about that is that means that things go unsaid. You never realize — you never have a chance to explore what makes you maybe a little different than your peers. And so that's what I was always curious about. But my dad never shut me down on those things; it's just not an area of interest to him. He doesn't like talking about it. ... I didn't even know what to ask, as a kid.

On how this family history begat a thriller novel

My parents only read the book this year. And I was like, "Look, mom and dad, this isn't you." ... But that said, the father in the book does have this background in organized crime, and he's done some bad stuff. At the same time, the point of the book is to show that he had his reasons. And he's such a loving father, and really the core, the rock in Victor's life. And that's why it's so crazy for Victor to discover these things about his father's past.

And if there's a moral core of the book, it's the idea that there are shades of gray that if you don't know the whole context of somebody's actions, you can't say for sure that this person who grew up in this really chaotic environment had a choice to do anything other than the crimes (what we consider crimes now, and of course were crimes in China at the time). ... I don't know if they're justified, but there's a good explanation for them.

On the liberal use of the Chinese language in the book

I guess I feel like the reason I did that is because we live in the United States that is very multilingual. And I really admire writers like Cormac McCarthy and Junot Diaz ... who incorporated Spanish into their fiction in an unrepentant way. It was like: If you can't read this, too bad. And you can still get through a Cormac McCarthy book not understanding all the Spanish, but it shows you that this country — I mean, those books are set in Texas, and that's a bilingual place. And the San Gabriel Valley, where Victor grows up, is really a place where Chinese is spoken ... it's a suburb of Los Angeles that's really populated by immigrants from China. And not just Mandarin, but many dialects are spoken there — more than English, in a lot of places. And that's the part of America that I wanted to convey.

On what his parents thought of the book

You know, my dad's Chinese and my mom is Jewish, so they just really want to make sure that I have health insurance. So they're glad I got a good book deal, and they thought it was a fun ride.

Emma Talkoff and Jolie Myers produced and edited this interview for broadcast. Patrick Jarenwattananon adapted it for the Web.